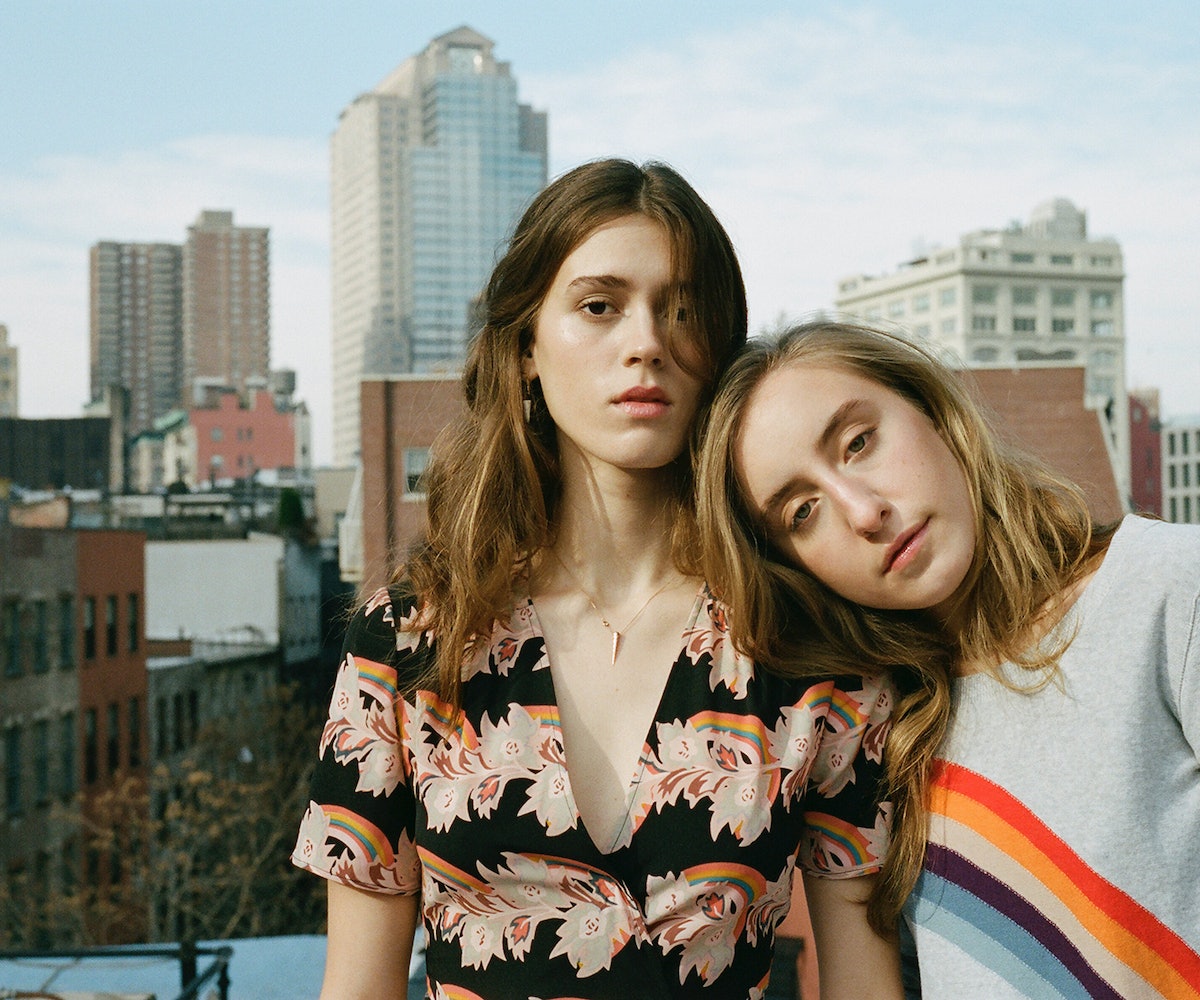 What were you doing when you were 13? Playing video games? Updating your AIM profile? Well, Heather Golden and Emma Rose Jenney of New York's dream-folk-rock band Beau were writing songs that would appear—about nine years later—on their debut album, That Thing Reality, out Friday and available for exclusive stream below.

Their sound—a little Stevie Nicks, a little Lana Del Rey—hasn’t changed all that much since they first started strumming together in their junior high guitar club. “Even though we were obviously terrible at guitar at the time, we just looked at each other and Emma was like, ‘Let’s start a band,’ and we started jumping up and down hysterically, just so excited,” recalls Golden. But the duo’s history goes even further back. The two grew up in Manhattan’s Greenwich Village and met at camp when they were about seven or eight. Their mothers were friends from the neighborhood, and the bond between the girls was instant. “To me, Emma was the ultimate Greenwich Village girl,” says Golden.

Today, the two ooze effortless downtown cool with their perfectly tousled hair, seemingly makeup-free glowing skin, and skinny black jeans and booties. They’re recounting their meet-cute from the penthouse of The Standard, East Village, an airy, gleaming space where they played their first official show as Beau just over a year ago. “It’s one of our favorite places in New York to play,” says Golden. “It’s so nice, it’s on top of New York City—you can’t get any more New York than right here.”

Another favorite—and more traditional—venue is the newish East Village hot spot Berlin, where they had a residency late last year, but that might have something to do with the taco truck across the street. “We definitely eat a burrito before we go onstage,” says Jenney with a laugh, admitting that until recently they didn’t realize such a heavy pre-show meal wasn’t exactly recommended. “But all the rock stars and punk bands back in the day were not following the rules,” points out Golden. These days, though, they’re trying to get into the habit of abiding by at least a few of them—Golden tries to do warm-ups before concerts, for one. ”But the more rules you build for yourself the harder it is to deal with life,” says Jenney. “So much is out of our control. And I feel like the fewer walls we put up and the less neurotic we get, the better. Listen to your body. If you’re fucking hungry you’ve got to eat. If you’re tired you’ve got to sleep. And being on tour is hard because you don’t really listen to yourself. I think if you do, it just works out. Your body knows what it wants.”

The same organic thought process goes into their music. Instead of studying theory, they’ve gone the self-taught route, with a few lessons and after-school songwriting workshops sprinkled in. “It’s mostly just intuition guiding us,” says Jenney. “I feel like that’s when you really develop your own style.” As Golden explains, “We’re very self-driven and hear melodies every day. It’s amazing how an emotion can transfer into a melody.”

Their songwriting process is just as fluid: “We try to be very honest when we write together, and not stress ourselves out too much where we’re thinking about way too many other things and it’s not natural,” says Golden. “It’s really creative when you have someone you can collaborate with on everything, because it’s two people writing lyrics, creating melodies, and two voices versus just one. It’s rare to find that.”

But it’s easy to see eye to eye when you have the same musical influences. Both admire singer-songwriters like Nick Drake, Jeff Buckley, Joni Mitchell, Andrew Wyatt, Grimes, and Bob Dylan, as well as bands like Alabama Shakes, Radiohead, Pink Floyd, and Led Zeppelin. But perhaps their greatest influence of all is New York City itself. “There’s a romanticism in being a starving artist in New York,” says Golden. “I grew up around [them], and I think that really influenced a lot. That’s one aspect of New York that’s really apparent—everyone is an artist. But there’s something beautiful about that, and really positive, too—it keeps the blood flowing.”

Listen to the album here.

NEXT UP
Culture
Kareem Rahma Survives A Dinner Party From Hell In “Really Rich Parents” Video
culture
Anna Delvey Is Getting A Reality TV Show
Entertainment
Ebony Riley's "Deuce Deuce" & 9 Other New Songs Out This Week
Fashion
Bottega Veneta Just Dropped The Next It Bag For Spring
Style + Culture, delivered straight to your inbox.