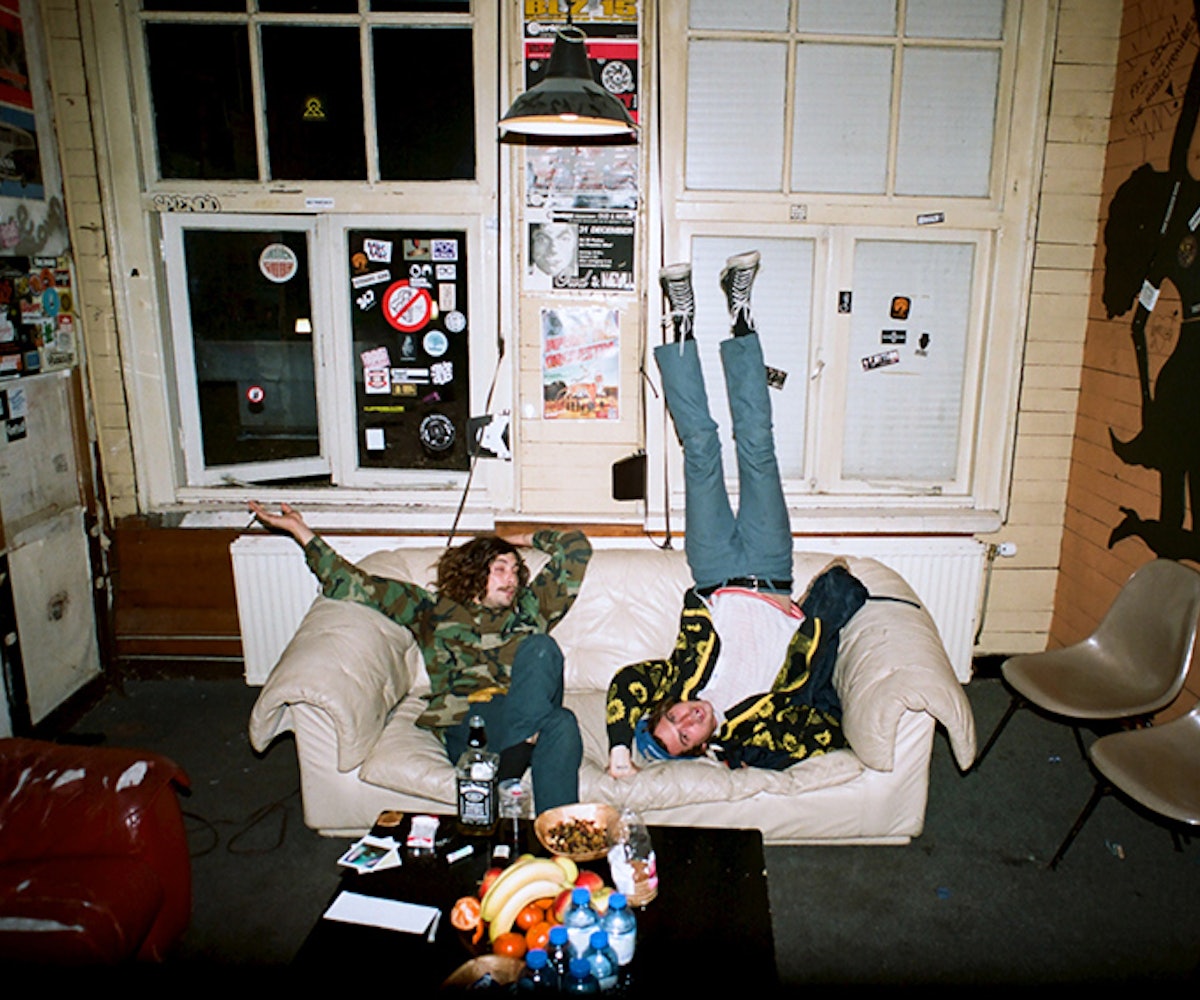 Interviewing a band before their set is one thing, but take a band out for some sips of their favorite beers at a bar around the corner from the venue, and you'll get a totally different interview. At least, that's what I experienced when NYLON contributor Liza Darwin and I sat down with The Growlers at Cafe El Portal in Nolita last week. Upon arrival to the somewhat underground, majorly cozy Mexican restaurant on Elizabeth Street, we all took a look at the menu and decided to go for some "brewskis"--at least, that's what lead guitarist Matt Taylor called them, and yeah, we do the same, "Don't eat, don't sleep, just breathe--that's my motto." says Taylor, "This is going to break my sobriety for three days."

What ensued from two editors and a group of musicians, hanging out and sippin' Dos Equis while snacking on chips and salsa (and daring each other to do shots whenever the word "music" was said) was the following:

Liza (chips crunching in the background): How did you guys first become friends?

(The waitress comes over to order our drinks).

Anthony: Kyle and I were buddies in high school.

Jackie: Did you guys have class together?

(The waitress walks away).

Liza: We couldn't order our chips!

Kyle: She'll be back.

Kyle and Matt in the mirror - Halloween’s Eve backstage at the Scala in London, 2013

(The waitress comes back with chips).Matt: Ooh, yayyy!

(Anthony starts using a spoon to put salsa on his chips)

Liza: So, where did you guys play before this?

Matt (in a Boston accent): ...We were in Providence

Matt: That was just before the sickness hit, when the sickness hit we were in this little town called Asbury Grove. It was the first church community in the United States. It was the creepiest. It was like Halloweentown. It's in Massachusetts, catty corner to Salem. It was, like, really witchy and creepy. We filmed a little video there in the church. It was definitely haunted. Kyle got sleep paralysis and this little girl held him down and was like, "Are you my Daddy?"

Matt: Neither have I.

Scott: It was like a man. I was in the other room. It was late, it was really late at night and I look over and there was someone in the big back room and I was like "Oh, shit." Then he like, walked away and then I realized..."There's no one else here."

Jackie: When can we see this music video?

Matt: You're gonna have sleep paralysis.

(I look at the menu to see what other beer they have).

Jackie: I know they have cactus on the menu, but I honestly don't like cactus that much.

Scott: Cactus is not that good. It's so slimy. (to Kyle) It's sort of like okra, I know you like okra.

Scott: Dude, I can't get past the sliminess. It's not my thing. I try. I try and try.

Kyle: I used to be able to eat like two jars when I was a kid. I would just sit there and "woosh!" Pickled okra, they're pickles! It's like okra...but I mean it's pickled, so. If you get the spicy ones too, "Ugh!"

Scott: Sundried tomatoes, that's where it's at. I could eat two jars of that--with olive oil.

Kyle: Pickled okra taco, I would totally order that!

Liza: How long are you guys on tour for?

Kyle: Most of our lives.

Matt: For the next month at least. The States--West Coast. Then Europe, and I think Australia. World tour!

Jackie: Do you guys hang out when you're not on tour?

Scott: Yeah, I hang out with Kyle a lot.

Scott: Yeah, that was awesome.

(Scott moves a candle away from a beer).

Jackie: Watch out, my hair might catch on fire.

Matt: I saved a girl whose hair was on fire once.

Anthony: That was so funny.

Matt: We were all hungover as fuck. We were all so hungover. This girl was there and I was like, "Oh, shit, your hair's on fire." It was so fried, I was like "Your hair is totally on fire." Scott actually has this asymmetrical haircut.

Scott: Oh, yeah, last Christmas I lit a firework and it burned my fucking hair off. That's why I have this stupid haircut.

(We all look at Scott's hair).

Matt: Yeah, you should clean it up. You should let me shave it. Let me shave your face, too. Let you be punk again.

Anthony: You should put it back in a ponytail though, that'd be sick.

Matt: When I first saw Scott he had a buzz. It was right before the year 2000, and he had the Y2k cardboard around his neck, "The end is near." I was like, "Who is this dork?!" Then I gave him a wedgie and a swirlie!

Scott: Yeah I did, I went to school, the last day of school before winter break for Y2K with a cardboard sign around my neck. I got so much shit for it.

Jackie: I thought the world was going to end.

Liza: So did I...we went to the mountains.

Kyle: Since Scotty just admitted his dorkiness to you I'm going to bring him back up a notch. Scott played a practical prank in high school. He put a flaming Pentagram in the football field the day before the homecoming game.

Scott: The day before the homecoming game!

Kyle: How big was it?

Scott: 35 feet! I thought it was really funny because the movie The Craft had just come out. I had this dude Brennan in ceramics class, he was like, "Oh my god, these fucking girls think they're fucking witches, but they're fucking not."

Kyle: Light as a feather! Stiff as a board!

(Then we all start talking about high school and how cool we were, getting wild and playing video games).

Jackie: The video game I'm best at is Guitar Hero...what was your first-ever band practice like?

Matt: We did it in Brooks' house and these surfers lived upstairs. They had a stripper pole and we were like, "Can we practice in your upstairs room?!" We started playing and we were like, "We're gonna kinda be like The Doors, let's just go in there and do it." But we had these geeky sounds on this organ and we wrote all these songs on this little tape recorder. We went to Vegas the next weekend and were just listening to it, like "Dude, we fucking ruled--it was so rad!" Then we met these billionaires who were on acid and they were like, "Are you guys in a band?" We were like, "Yeah, we're in a band, check this out," and we played it for them.

Jackie: I have a serious question, though. How did you guys pick your tour bus..er, van?

Scott: This is like our fifth bus. Let's see it was, Franny, Lizzie, Dina, Tina....The first one was a big one, like a full sized school bus. The second was one a smaller school bus. Then we had a shitty, well, not shitty, but it was like a 1980's Dodge van. But they all broke down.

Jackie: Do you guys get to go home a lot?

Anthony: My home is, I live with Kyle.

Kyle: Yeah, we live together.

Liza: On a little white bus?

Jackie: You guys don't get sick of each other?

Anthony: No. We rage harder when we're home than we do when we're on tour.

Jackie: What does that entail?

Anthony: Watching TV secretly late at night. Scott lives on the harbor and has a little boat so I go out on his boat all the time.

Scott: Wanda. Well I think it should be Wanda Spyboat.

Anthony: I thought it was going to be SS Scott.

Scott: Oh, yeah! SS Scott! But what about the spy mission we're going to go on?

Jackie: (to Kyle) Did you pierce your own ear with that safety pin?

Anthony: Matt pierced his own ear with a fish hook and he still has it in there.

(Eventually, Cafe El Portal got too crowded to hear what was on the recorder--I did make this out, though).

Jackie: Let the record show, that in the future, The Growlers would like to have BFF Tattoos on their belly buttons.

Scott: It would have to be something with lint.

Matt and Brooks upside down on the couch, Nijmegen, Netherlands, 2013

One by one, each member of The Growlers got up to head out to the show. All that was left was Liza and I, surrounded by empty beer bottles, chips crumbs, and a table for six, wondering how "music" was only said once.

Go scoop up The Growlers latest record, Chinese Fountain, out now--and trust us, you'll definitely want to catch them live while they're on tour.