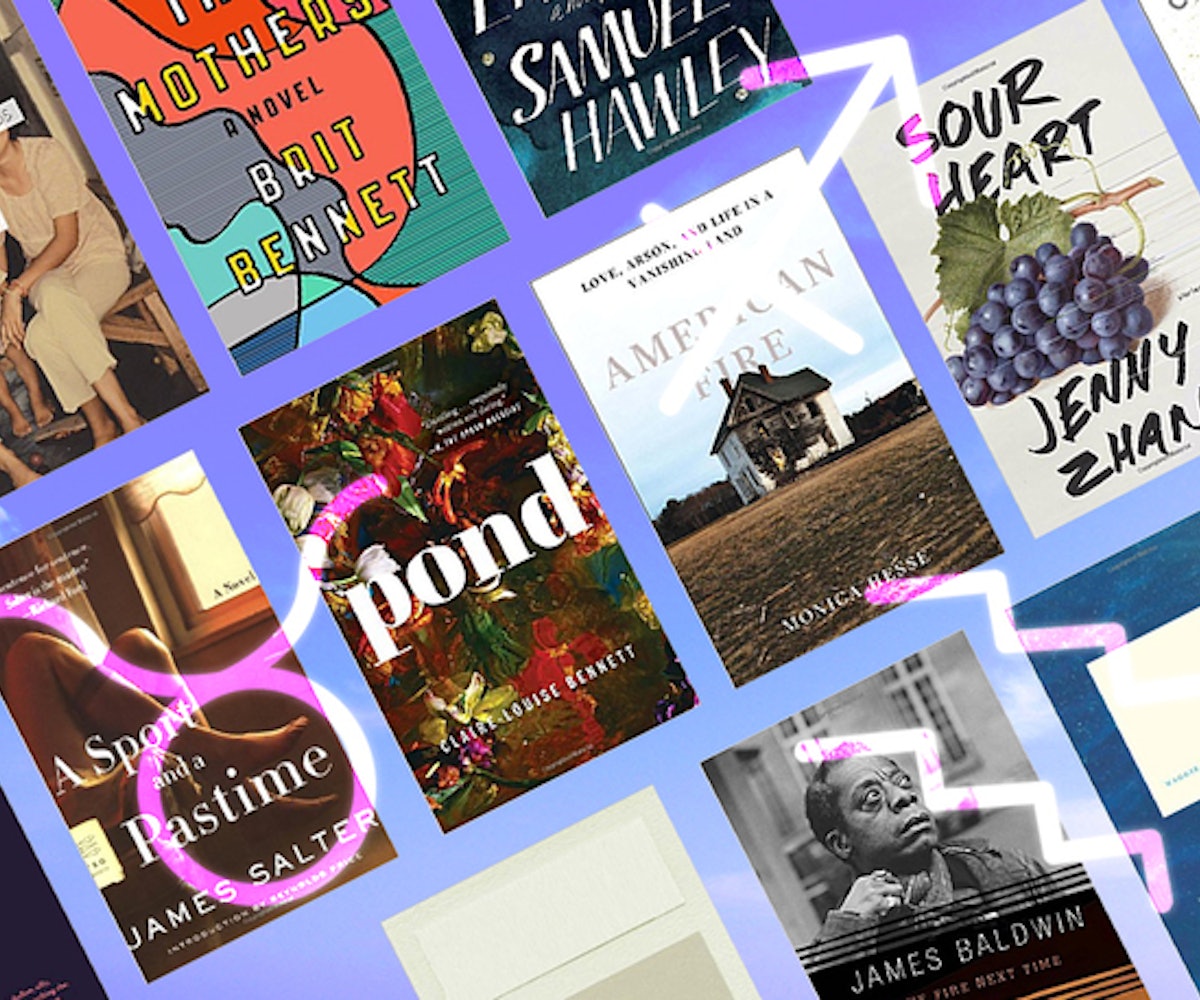 Is astrology real? Who is to say, really? Who cares if something is real when it's so fun and... distracting. Everyone needs distractions, after all, and astrology is a pretty great one. (Plus, like, there's no denying that Geminis are low-key psychopaths, so maybe it is all real?)

Anyway, speaking of distractions: books. Last time I checked, it was still summer, and there's no better way to spend these hot, humid days than by being inside with a good book. But what to read? Well, recommendations can be fraught, because what's good for one person isn't necessarily good for another. Like, just because I (who am moody, mercurial in my tastes, though definitely partial to books that trap me like quicksand) like something, doesn't mean that you (who want to dip in and out, and only occasionally want a book to crash over you like a wave) will.

What is an Aries but a passionate pyro? The kind of person who gets their kicks by wreaking havoc and causing chaos? Who enjoys watching themselves reflected in the glow of dancing, flickering flames? Well, an Aries is also someone who doesn't have time or patience for fiction; they're not interested in anything make-believe. They want the facts and they're not interested in too much embellishment. Just give it to them straight—and in a book that can be read over the course of a single sitting, or maybe two. Monica Hesse's American Fire perfectly aligns with an Aries' reading habits then. It's the true story behind the more than 80 fires set over the course of a few months on the Eastern Shore of Virginia. Hesse lays bare this tail of economic malaise, the death of the American dream, lust, love, erectile dysfunction, and so many fires, in a compelling manner that will have even the notoriously short attention span-having Aries completely captivated.

A Taurus is a person with a keen eye for beauty; a Taurus is a sensualist. A Taurus is also, maybe, slightly insane in that way in which they are so practical that their practicality takes over all their interior thoughts, so that they just can't stop thinking until they become overwhelmed, paralyzed even, by the idea that maybe, just maybe, that man innocently walking down the road is actually up to no good. To a Taurus nothing is innocent. (This is partly because a Taurus is full of covetous desire—so, so full.) Pond, then, Claire-Louise Bennett's slim, strange, brilliant book, is the perfect choice for a Taurus. Reading it is in itself a sensual experience—colors, textures, flavors, scents, sounds—they all leap off the page. It's a trip into the interior of someone's mind, a dark, fertile place to dwell for a little while. Or forever.

A Gemini is known for her intelligence, but it's a very specific sort of smarts. A Gem is restless within their own head, constantly searching, refusing to settle down, careening from one thing to the next, never quite sure of where they are or who they are. Jenny Zhang's incredible new book, Sour Heart, tells the stories of several young immigrant girls growing up in New York City, and the inherently split reality of their lives, the intrinsic restlessness, is parallel to the way most Geminis feel all the time—like they are missing some other part of themselves, and on a constant hunt to find it. Beyond that, though, the brilliant, twisted weirdness of so many of these stories, Zhang's willingness to go places that many others would fear to visit, and her playfulness with language (Crispina!), are all evocative of a Gemini's own delight in the perverse pleasures of human existence.

CANCER: The Mothers by Britt Bennett

A Cancer's attachment to the idea of home and all that entails is the fiercest thing about this hyper-emotional sign, the ur-mother, the moon itself. And Brit Bennett's The Mothers, shares a similar magnetic pull to the moon (and its prose has a lunar luminosity; Bennett's words glow off the page); it's an emotional story, one rooted in the question of "what if things had been different?" (For the emotionally driven, spontaneous decision-making, clean-up-the-mess-later Cancer, this is a question that gets asked frequently.) The Mothers is evocative of the Cancerian inclination toward inward reflection; it's full of beauty and grief, piercing absence, and is grounded in the idea that it is our communities—our homes, and the women who are and aren't in them—that shape who we are, and how we carry ourselves in the world.

LEO: The Fire Next Time by James Baldwin

Roar, Baldwin, roar. This powerful book is an essential look into both Baldwin's life growing up in New York's Harlem and the horrific racial injustice that is an ingrained part of the American experience. It's a passion-fueled look at institutional racism, one designed to discomfort and enrage the reader. It contains the bold, fiery spirit of the Leo; it commands you to pay attention and to take action. It's a kinetic masterpiece, an intellectual wonder, but also a heartfelt sermon, one meant to draw attention to the problems we face not just as individuals, but collectively. Leo the lion is, after all, a pack animal, and the pride is only as strong as its weakest members. Baldwin's masterpiece beautifully demonstrates the importance of this, and reading it is as unsettling and uplifting as encountering a lion in the wild.

VIRGO: How to Murder Your Life by Cat Marnell

For workaholic Virgo, what better book to read than Cat Marnell's dizzying, hilarious, horrifying, and often very chic rapid rise and dramatic fall in the world of fashion media? NONE. No, really, there is no better book. Sure, judgmental Virgos might find themselves tsk-tsking at some of Marnell's more... questionable professional and personal choices, but they will also find themselves relating to her obsessive love of all things fashion, and the ways in which she is super-meticulous about certain aspects of her job (clean freak Virgos will also totally die over the scene in which Marnell organizes her boss' office). Plus, even if her addiction issues sometimes got in the way of her ambitions (and other times fueled them), Marnell herself is so clearly the ur-Virgo in her very practical desire to, like, rule the print beauty industry and only ever present herself on exactly her own terms. She's all about control, after all, just like a classic Virgo, and that's why this is the perfect control freak memoir—emphasis on the freak, in the best possible way.

You know who, in my experience, make the best possible friends? Obviously, the answer is Libra: They're charming, entertaining, low-key very weird, up for pretty much anything, and often have sleeping problems, so are totally able to text with you in the middle of the night. Plus, they kind of have a hard time to both saying no to anything and really committing, which means they're really fun to make plans with and then maybe not actually have to hang out with, because it's cool if you both cancel and then just send each other funny pictures of yourselves all night anyway. Doesn't that kind of friendship sound great? Don't you just want to live in that kind of friendship? Well, get your own Libra BFF, but in the meantime, read Emily Gould's wonderful Friendship, which relays the ups and downs of one such perfectly imperfect friendship, brilliantly encapsulating the feeling of having and being a best friend. <3

For moody, tempestuous Scorpio, nothing will do but a penetrating, vital work like Ocean Vuong's Night Sky with Exit Wounds. (Just the title alone screams Scorpio, doesn't it?) Much like the watery depths in which the Scorpio dwells, Vuong's poems vacillate between extremes of darkness and light, compassion and redemption, gentleness and ferocity. This is a book of contemplation and emotion, perfectly suited to the intuitive brilliance of a Scorpio.

SAGITTARIUS: The Twelve Lives of Samuel Hawley by Hannah Tinti

Tinti's epic novel, which traces the lives of outlaw Samuel Hawley and his young daughter, is ideal for the philosophically minded Sag, who likes straightforward stories that have archetypal heroes at their center; the kind of narrative that makes readers question their ideas of why the world works the way it does, and how they fit into the unknowable universe in which we live. Sags want to know that the lives they're living have meaning, and The Twelve Lives of Samuel Hawley offers up many possible answers to different existential questions, making it just the right book for any Sagittarius to take with them on their next camping trip deep into the woods. (Because you just know a Sag has a trip, just like that, planned sometime really soon.)

CAPRICORN: A Sport and a Pastime by James Salter

Though this book takes place in the hazy greens and blues of summer, and a Capricorn is a child of the deepest, darkest winter, it's still an ideal choice for a Cap because, well, the zodiac's goat is a horny beast, and this book is an immersive journey into a poignantly sex-fueled love affair. And Capricorns are also sentimentalists. as well as sensualists, so all those hazy greens and blues? That's kind of just how a Capricorn views the world anyway. Beyond that, Salter's perfectly composed, economically worded sentences will appeal to a Capricorn's own sense of practicality and appreciation of beauty and grace.

AQUARIUS: Too Much and Not the Mood by Durga Chew-Bose

Ultra-intelligent Aquarius has found its match in this stunning collection of essays by Durga Chew-Bose. Much as an Aquarian's mind tends to want to go deeper, get above all the layers of noise clouding up the atmosphere, Chew-Bose's work exists on its own rarified plane. Her thoughts line up like crystalline drops, until the moment when they all meld together to create a shimmering landscape, the perfect place for an Aquarian reader to dive in and splash around.

A Pisces is no stranger to suffering, and they're not afraid of wallowing in their own, so there's little doubt that they will love the experience of exploring someone else's. And whose better than Maggie Nelson's? Bluets is a profoundly moving, lyrically written, provocative look at love and pain, loss and limitations. It is the perfect book for a Pisces, who feels everything deeply, especially when it comes to loss and love.