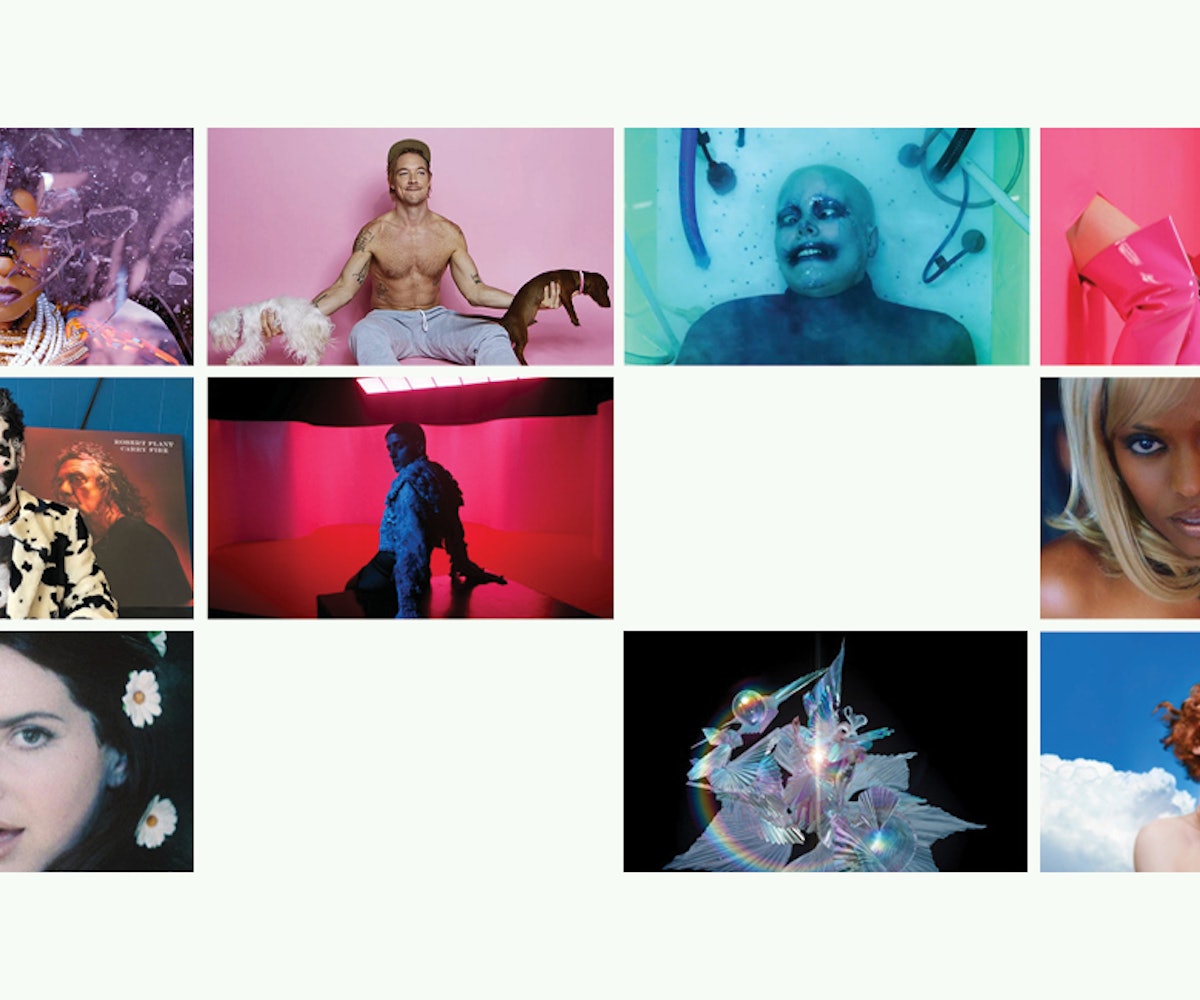 The golden age of music videos is over. It took TRL more time than necessary to even play one during this past fall's reboot. What's TRL without the music videos, huh? But then, just as TRL apparently doesn't need music videos, do music videos even need TRL?

The answer is, of course, no. We're entering a new age of music videos, one that gives artists more control over the release cycle and direct access with the fans to celebrate. YouTube is just the beginning. Don't expect Beyoncé to be the last person to create a visual album. If anything, videos these days are becoming more and more cinematic. Sure, some videos this year kept it cute and concise but the real standouts were the videos that went there and created a world worth getting lost in for a few minutes (or more!) before returning to again and again. (We're looking at you, Grimes.) From expert nods to '90s divas to a prismatic, CGI utopia of spiritual love, these are the videos we couldn't stop watching this year. Oh, who are we kidding? We'll be watching these well into the new year. C'mon view count!

We'd follow Lana Del Rey to the outer reaches of our galaxy if she asked. (Ask, Lana, ask!) Funny, then, that her video for the startlingly optimistic Lust For Life single "Love" shoots for that and lands among the stars. A video by any other name would be an impersonation. In this world, the young and in love youths run free, eager, and wide-eyed. They and their surroundings are always photo-ready. Love leaves them weightless and anticipating, all while Lana Del Rey, their entertainer and narrator, tells them not to worry. Sounds pretty much like our real, Instagram-happy world, huh. Del Rey's is better.

World, SOPHIE will see you now. For the first time in her enigmatic career, SOPHIE stars in her video, face forward and all. Not only does the video mark our first official look at SOPHIE, it's the beginning of a whole her era for the PC Music-adjacent producer. There's a big storm coming from SOPHIE. World, you ain't seen nothing yet.

As a matador stilted on mechanical legs, Arca embodies both the predator (bull) and the prey (matador). It's an arresting visual, to begin with, but when you look deeper at what's happening, "Reverie" becomes something so much more than a haunting video. For, the matador symbolism evokes the pain and ecstasy of homosexual carnality. Arca embodies the top and bottom role here. "Evoking sex invokes our animality," he says of the video in a press release. "And evoking our animality, in turn, invokes spirituality." Read into the flowers Arca bleeds into as you wish. "Reverie" is a video that can't be forgotten.

Oh, hey! SSION is back and with a music video that does exactly what every music video should: build a world worth escaping into over and over again. Cody Critcheloe blends rock opera with DIY punk rock and a sprinkling of camp to create a video you have to keep your eyes on, or else risk missing its brilliant, nuanced effects. Instant icon status.

"To the Moon and Back” - Fever Ray

Not every music video should tantalize and excite you. How boring would that be? Fever Ray's video for "To the Moon and Back" does not lend itself kindly to multiple viewings. It's uncomfortable; the bacchanalia at the end goes places even the most twisted version of Alice in Wonderland would never. Only fitting for one of the most provocative artists out there, one who has always committed 200 percent of themselves to any particular album cycle. This is a video that made us feel something different, and for that, it deserves praise.

God, this hyperreal, deliciously colored, and retro-future glamour era of St. Vincent is phenomenal, isn't it? Every frame of this video is a photograph. The stillness is calculated, which, for a song about losing love in the city that never sleeps, feels just right. A little Dadaism goes a long way in this day and age; we're just glad St. Vincent is releasing videos worth every second of escaping into.

Kelela embodies Lil' Kim, Mary J. Blige, and Toni Braxton in what's one the year's most empowering videos. Her alignment with three iconic, strong women puts her deservedly on their level. "LMK" is already a stunning independent woman anthem, made even more so by Andrew Thomas Huang's video direction. Here's to more nights out like this in 2018.

No, you're not tripping. You're just watching Björk's video for "The Gate," one of the most cinematic videos to come in, well, ever. Dressed in a majestic Alessandro Michele-designed Gucci dress, Björk is reborn into a prismatic utopia that's more connected to some astral plane than this universe. Whatever it is, it's breathtaking. Here, maybe director Andrew Thomas Huang can explain it better. "'The Gate' picks up where 2015's Vulnicura left off," he tells NOWNESS. "The doorway lies within the wound from Vulnicura, which now appears transformed into a prismatic portal channeled between the chests of two lovers." Ah, wait. Yes, this is what bliss must look like.

The time has come, dear readers, that we turn that objectifying gaze the world at large has toward women on the fellas. Who better to do so than Charli XCX? The self-directed video for a song devoted to lusting after those XY chromosomes packs more famous, ridiculously good-looking dudes into one video than what's probably legal. The camera shamelessly begs the viewer to ogle to their heart's desire. Lana Del Rey may have a song called "Music To Watch Boys To," but this? Charli didn't just give us music to watch boys to; she gave us boys to watch the music to.

This. Is. A. Music. Video. Sure, Grimes' Art Angels came out in 2015, but that doesn't mean Grimes should stop making videos from it. Frankly, we hope there's more where this came from because the "Venus Fly" video is fan-fucking-tastic. Grimes and Monáe are the fantasy fighters we don't deserve, wielding flaming swords and the freshest couture fit only for cybergoth queens. Grimes directed and edited the video, which is all the more impressive. This is 100 percent a female's vision—one that's fiercely cocky, whimsical, and downright transcendent. Sorry, but nothing can top this video this year.