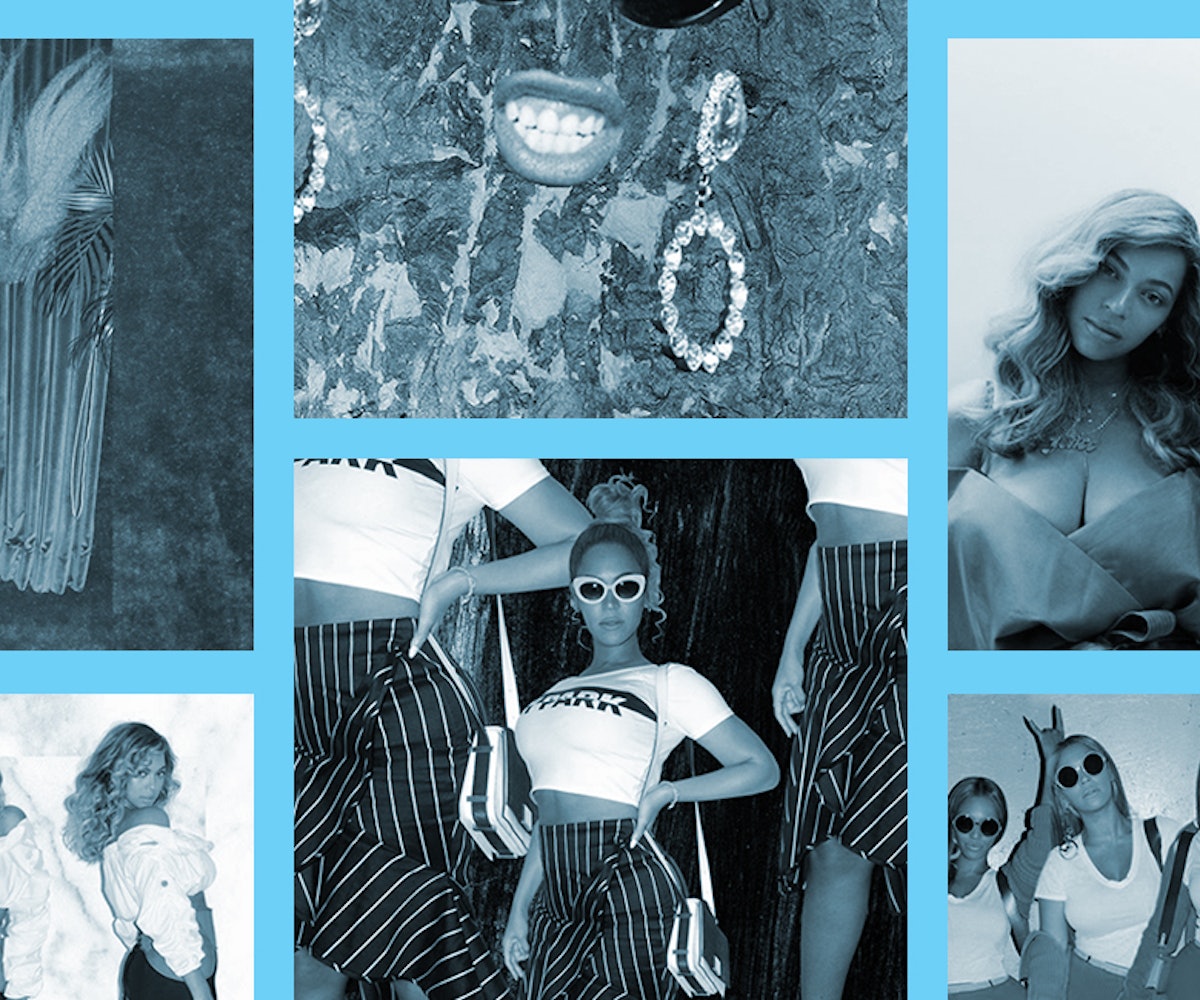 On November 6, 2012, @BaddieBey (her then-Instagram handle) made her public debut, lip snarled and finger pointed toward her shirt which read, “Texans For Obama.” Today, @beyonce has over 110 million followers, all waiting to see which song she’s going to Boomerang-dance to next. Her feed isn’t updated the most frequently, nor does it give anything resembling an unfiltered look at her life, but it is incredibly fascinating nonetheless. And because it has long been so rare to know how the enigmatic singer spent her days, any glimpse into Bey's life is a thrill. So while she is still very much a mystery, at least we have some clues to fill out the puzzle wrapped in a mystery and posted in an Instagram grid to help keep our obsession alive.

The first thing that makes Bey’s Instagram different is that her posts have a specific formula to them: She posts images in series of threes. When she first started doing this, I—along with others—rolled my eyes. Beyoncé doesn’t know how to Instagram, I thought, alarmed by the fact that her style seemed to mimic try-too-hard influencers.

But the first rule of being a Beyoncé fan is knowing that you should never doubt Beyoncé. Maybe non-visionaries who post in threes are worthy of our mockery, but Bey is different. She's taken Instagram to a whole new level with things like her trio of posts from December 9. You have to cock your head sideways, but they show the singer in a striking silver feathered mini dress. The second image is a slideshow detailing her accessories, makeup look, and showing the angles of her outfit. The presentation is akin to a Monet painting: There’s clarity when you pull back and look at the whole thing, but there's also much abstract beauty to be found in the details.

Bey’s also pretty much the only one to master the tricky triptych approach. She commits to it, which is important. But she also mixes in Boomerangs with single shots and Insta-vids with collages. No single image is the same. It’s also bold because very rarely does Instagram show you three pictures from the same account in a row on your feed. If you see one from Beyoncé, though, you know there are two more waiting, and you have to click over to her page to see the vision laid out. It’s calculated, but things with Beyoncé usually are.

After all, let's not forget that the singer owns a temperature-controlled storage facility which holds every photograph ever taken of her (dating back to the ‘90s), every interview she’s done, every show she’s performed, every video entry she’s ever recorded. She makes it a point to be in full control of her own narrative, and that extends to her Instagram. Through her posts, she pulls the curtain back on her life, but only far enough for us to see what she wants us to see. As fans, we may view her Instagram as a gift. Or, as another way to overanalyze the singer’s actions—or even inactions. Though Bey hasn’t posted in a while, that only increases fans' frenzy that she'll be dropping something soon, something for us. Because maybe all her posts are cryptic messages for her Hive? Maybe! But they’re mostly just a celebration—of Beyoncé, her womanhood, her motherhood, her blackness, her career, her life.

Beyoncé pretty much stopped giving interviews back in 2013, so the only real insight fans have into her life is what she presents visually or through song or both. She posts outfit pics alongside date night shots and, on rare occasions, she might even get a little political. Or even tease the fact that she has a Snapchat account—not that she's sharing the info with us, she just wants us to know it exists.

But there’s a reason why Instagram is one of the few forms of social media she uses publicly: Images are a concise and calculated way of interacting with her fans without distraction. She rarely includes captions because words can always be misconstrued. She doesn’t use the app to keep up with friends and family, she makes that clear by not following anyone. She’s not trying to sell us the latest fashion outfit. She’s just there to be there—and sometimes flex a bit. We’re just grateful she lets us double tap our way into her magical life from time to time.