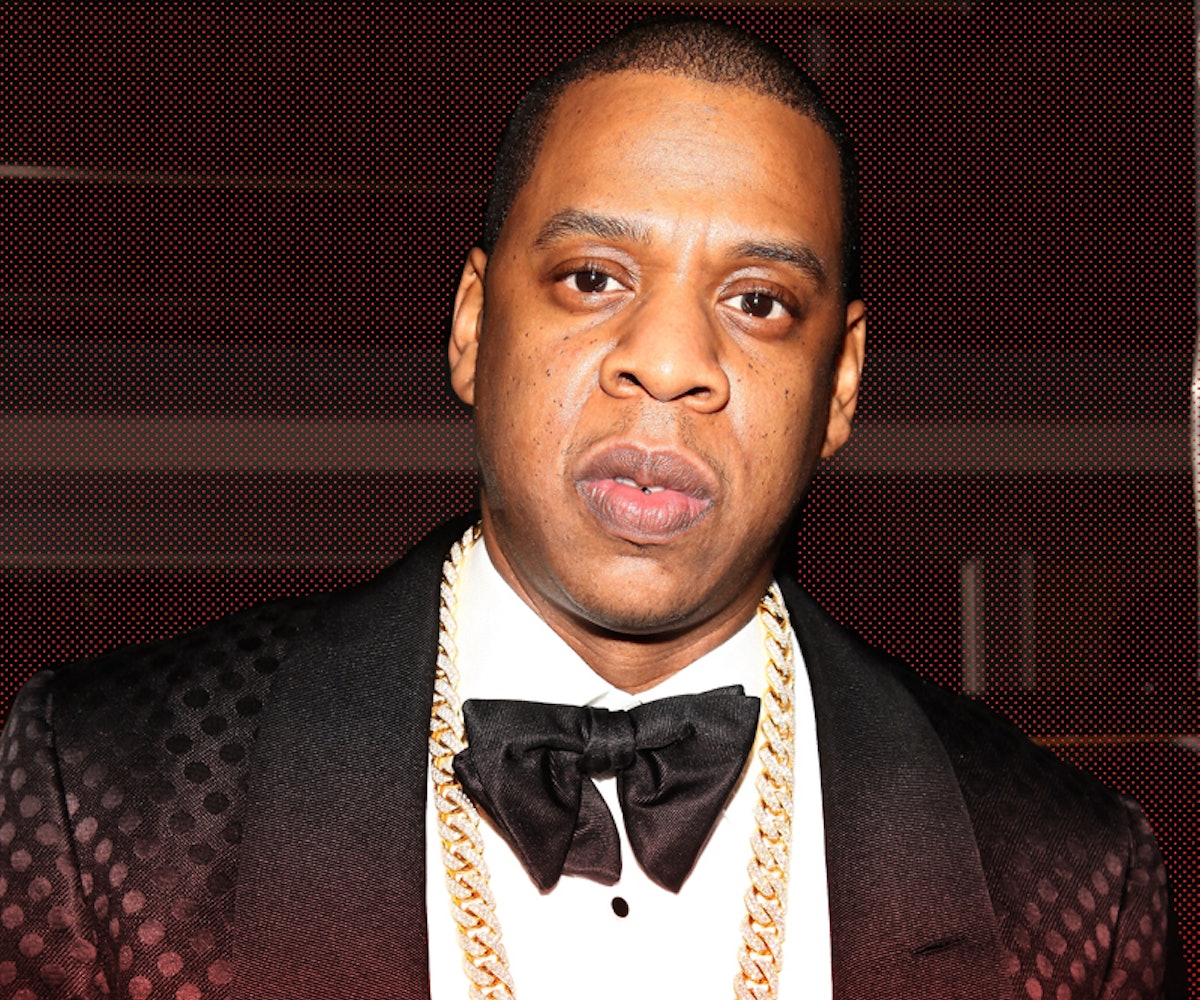 Beyoncé’s new visual album, Lemonade, has everyone talking—not just about its groundbreaking format and formidable artistry, but also about what it means for her marriage to Jay Z. As you already know, a lot of the album focuses on cheating. It charts its protagonist’s reaction to her husband’s infidelity, from the initial feelings of hurt and anger to eventual forgiveness and reconciliation. Of course, we don’t know much about Bey's and Jay’s private lives, and one assumes the music involves some level of poetic license, but Beyoncé does drop several hints that she’s talking about her real-life relationship.

For instance, when she sings, “Let’s imagine for a moment that you never made a name for yourself… still out there movin’ in them streets,” in "Hold Up," she seems to refer to Jay Z’s pre-fame origins in the Bed-Stuy projects. “Here lies the mother of my children both living and dead,” a line of poetry in the interstitial section titled “Apathy” seems to refer to her two pregnancies, one of which ended in a miscarriage and one of which became the couple’s daughter Blue Ivy. Jay Z himself appears in the album’s videos, both in home-movie-style shots and in original footage.

If Beyoncé is not working from at least a germ of truth, she’s certainly leading us to believe she is. And that’s how most people have been understanding Lemonade: as a partially, or even mostly, autobiographical story about getting cheated on and working through it. The raw honesty with which she describes her feelings of jealousy and rage is what makes the music so powerful—but it also (apparently) reveals some unflattering things about Jay Z, and the Internet has used Beyoncé’s angry lyrics as a rich font of anti-Hova jokes and memes.

The most common one has been that Jay Z has 100 problems now instead of 99, and Twitter and Instagram are digital treasure chests full of more original and, yes, hilarious examples. Most of them posit Beyoncé as a sort of righteous but slightly unhinged medieval sheriff, slapping Jay Z in the town square’s stocks and inviting all her fans to throw rotten lemons at him. Jay, meanwhile, is a “henpecked stay-at-home hubby” submitting to his punishment.

As a feminist, I’m here for representation of female power, and as someone who conducts way too much of her social life online, I’m also here for ingenious Twitter riffs. Also, I’ve never thought particularly highly of Jay Z—I’ve never thought too much about him at all, to be honest; he’s just Mr. Knowles, as far as I’m concerned. But, almost against my better judgment, I find myself having a “leave Britney alone” moment about Jay’s current predicament.

Because there’s something all these jokes have to ignore for the humor to work: Lemonade isn’t just about cheating. It’s also about moving past cheating. If Beyoncé exposes Jay Z’s (possibly semi-fictional) faults with lines like “You don’t love me deep enough” and “He always got them fucking excuses,” she also takes an honest look at the very human reasons why he—or anyone—is capable of betraying their partner in the first place. “Why do you consider yourself undeserving?” she asks in the interstitial section “Reformation.” “Why are you afraid of love? You think it’s not possible for someone like you.” And in “Love Drought,” she sings that “Ten times out of nine I know you’re lying, but nine times out of ten I know you’re trying.”

That trying is key. Many relationships should and do break up because one party won’t stay faithful, but if both parties are willing to put in the work, infidelity doesn’t have to be the end. Think of Wild author Cheryl Strayed, who revolutionized the advice-giving genre with the wisdom and compassion in her Dear Sugar column. In that column, answering a letter that asks if infidelity is a dealbreaker, Strayed writes about how her husband slept with another woman early on in their relationship. She says she gave him another chance because “I understood his explanations, infuriating as they were.” She says, “Most people don’t cheat because they’re cheaters. They cheat because they are people… because they’re horny or drunk or damaged from all the stuff they didn’t get when they were kids.” She says, “I’m not just grateful that I decided to stay. I’m grateful it happened.” The cheating led Strayed and her husband to have conversations and work on their flaws, in ways they wouldn’t have done otherwise, which led to a marriage that, years later, is still going strong.

Have Beyoncé and Jay Z had those kinds of conversations? Has Jay Z done that kind of soul searching? We don’t know. Again, we don’t even know for sure if any of this material has any autobiographical elements at all. But by appearing in Lemonade and having a huge financial stake in it via TIDAL (the music streaming service he owns and on which Lemonade was released), Jay is standing behind his wife’s creative endeavor in a very real way. To give your implicit (and probably explicit) blessing to a project you know will expose the tender underbelly of your ego to millions of gossip-hungry people demonstrates a level of maturity, love, and respect that many people wouldn’t be able to summon up.

The premise of the above joke (which is great and deserves more retweets than it got) is that if the man in the conversation ever cheated, the woman would take vicious and public revenge on him. But in all likelihood, the real “Lemonade talk” was actually more like Beyoncé saying, “I’m working on something really great, but it’s going to be very honest about what happened,” and Jay Z saying, “I respect that.” Well, okay, let’s be honest. It was probably a series of talks over a period of time. Maybe with a couples therapist in the room. And the result was Beyoncé releasing this album, and Jay Z being, by all appearances, okay with that.

Jay Z may deserve mockery for cheating in the first place, but for backing his wife up, even when she’s portraying his shortcomings so vividly, he deserves not ridicule, but respect. He’s not just a husband in the doghouse or a target for the Beyhive to swarm on. As Lemonade makes very clear, he’s a flawed human being who is, maybe for the first time, being a good partner and being vulnerable, humble, and supportive.

Pop music about relationships is usually, for lack of a better term, juvenile. It’s about first loves, first heartbreaks, and unrequited crushes. Those are all-important emotions and experiences, and some essential music has been made about them. But Beyoncé’s previous, self-titled album declared itself to be “for all my grown women,” and Lemonade continues that undertaking. While Beyoncé made the case for long-term commitment as sexy and exciting, Lemonade portrays it as something different: the kind of “horribly complex… perfect couple”-hood that Cheryl Strayed describes as “happy, humane, and occasionally all fucked up.” Ironically, this album about infidelity may be the strongest case for monogamy in pop music history.

People across the media spectrum, from the back alleys of Tumblr to the hallowed halls of the New Yorker, have deemed Lemonade an “act of public shaming.” While that may be so, it’s also an act of public devotion, public forgiveness, public love, public commitment. In grand feminist tradition, Beyoncé has made her personal life public and political—which is often the very literal definition of feminism—turning the minutiae of an individual relationship into art with universal meaning that goes beyond any one person’s baseball bat or daddy lessons or beef with Becky. Even if that individual relationship is completely fictional, and even if Jay Z is engaged in some sort of crafty marketing ploy, that art is important.

In the end, this isn’t about Jay Z. It’s about complicated and challenging and rewarding partnerships between two adults who meet each other as equals, with all the vulnerability, honesty, and mercy that requires. Keep the memes coming, but keep the difficult beauty of that grown-woman kind of relationship in sight, too. Beyoncé has worked hard to show us how much it’s worth.

NEXT UP
Entertainment
Everything We Know About SZA's New Album
Entertainment
RM's "Yun" & 9 Other New Songs Out This Week
Entertainment
Precious Pepala Is Going From TikTok Covers To Her Own Resonant Songs
The Art Issue 2022
From Renaissance To Gemini Rights: The Stories Behind 2022's Best Album Covers