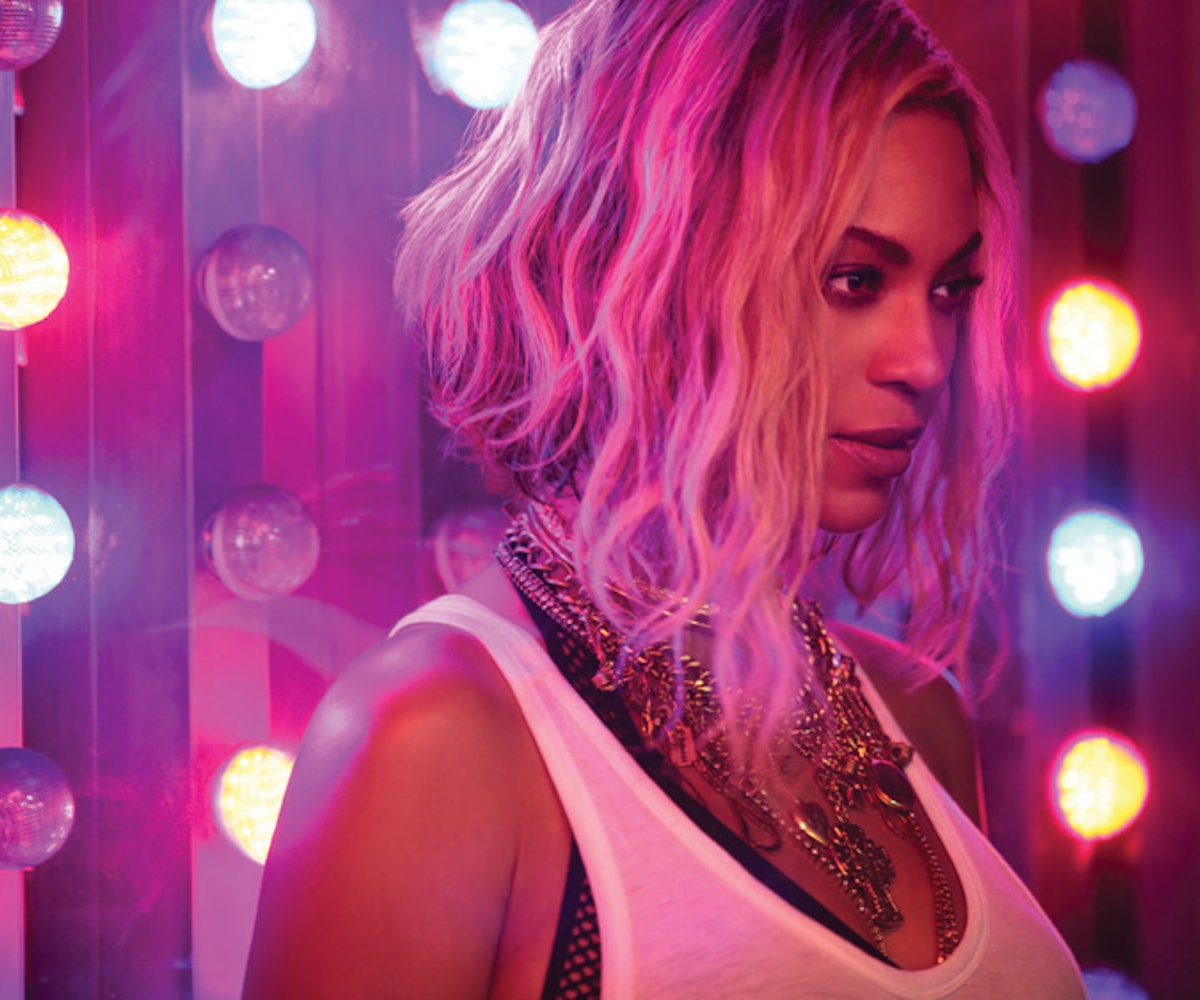 In case there was any confusion, let me make this clear: No one can top Beyonce. While North America slept, the Queen B dropped a new album, The Visual Album, filled with 14 new songs, a digital booklet of photos, and--get ready for this--17 new music videos. As if that wasn't really impressive enough, the list of Bey's celeb collaborators is endless; here are just some of the people who helped to make her epic release a reality: Sia, Harvey Keitel, Justin Timberlake, Jay Z, Drake, The Dream, Pharrell Williams, Timberland, Caroline Polachek, Frank Ocean, Ed McMahon, and Terry Richardson. Oh, and we can't forget her daughter Blue Ivy, featured on the album's final track "Blue."

Like any good music journalist, I spent the entire morning, literally, listening to the album and watching, scrutinizing, and enjoying the music videos. So if you want to find out everything cool, shocking, exciting, or weird in Bey's latest oeuvre, meet me in the gallery where we can discuss that Lady Gaga appearance, why Joan Smalls licked Beyonce's chest, and exactly how many Chanel outfits is the right amount.

LYRICS TO KNOW: "Perfection is a disease of a nation."

THE VIDEO VIBE: A beauty pageant with Harvey Keitel the pageant director, Shaun Ross as her dance instructor, and Diandra Forrest as her top competition.

SCENE TO KNOW: Beyonce belting out her song in a star-print dress and rhinestone rabbit ears.

SCENE TO KNOW: Beyonce writing in a fabric tube. (Really, this one you need to see to understand.)

THE SONG VIBE: A Prince-style voiceover plus a raging '90s club beat.

LYRICS TO KNOW: "Ghost in the sheets / I know if I'm haunting you / You must be haunting me"

LYRICS TO KNOW: "On the mic with my boy toy / Then I fill the bathtub half way / And ride it with my surfboard"

THE VIDEO VIBE: A black and white beach dance party.

SCENE TO KNOW: Jay Z holding a glass of liquor on the beach, as one does.

LYRICS TO KNOW: "Ooh I had a naughty thought today baby" (That's really the only one without an explicit sexual innuendo....)

THE VIDEO VIBE: It's an ultraviolet roller disco! There's roller rink twerking, Solange on a low rider bike, blue eyeshadow galore, and a very sensual break down on top of a red convertible with a neon sign reading "Cherry" in the background.

LYRICS TO KNOW: "You're no angel either baby"

THE VIDEO VIBE: Vignettes of people in Houston and Beyonce in a white fur coat and cowboy hat. Texas forever.

SCENE TO KNOW: The pee-wee football game because if we know anything about Texas it's that football is a big deal.

THE VIDEO VIBE: Beyonce, Joan Smalls, Chanel Iman, and Jourdan Dunn hang out and act like babes together.

SCENE TO KNOW: When Joan Smalls licks Beyonce. Or when Beyonce raps "I sneezed on the beat / And the beat got sicker"

THE SONG VIBE: This is the one to dirty dance to.

SCENE TO KNOW: Beyonce in all leopard lingerie dancing around like whoa.

LYRICS TO KNOW: "Sometimes I want to walk in your shoes / Do the type of things that I'll never ever do"

THE VIDEO VIBE: Beyonce wants to be a normal lady, guys! She starts out in her expensive penthouse, leaves and attempts to go for a walk in a red leather trench, and then reunites with Jay Z on an empty street.

SCENE TO KNOW: When Bey gets spotted by America's Next Top Model contestant, Renee, from Cycle 20!

THE SONG VIBE: The rap ballad

LYRICS TO KNOW: ""Let's stop holding back on this / And let's get carried away"

SCENE TO KNOW: When two dancers re-enact Rene Magritte's The Lovers in with T-shirts reading "Mine" covering their faces instead of sheets

LYRICS TO KNOW: "You heart is glowing / And I'm crashing into you"

THE VIDEO VIBE: Directed by Terry Richardson, this the video shot in Coney Island everyone was buzzing about this summer. It's a summertime party!

SCENE TO KNOW: When Beyonce rides the rollercoaster in Coney Island.

LYRICS TO KNOW: "Bow down, bitches"

SCENE TO KNOW: The opening shot of Beyonce on star search, and the closing shot where she loses to a band no one had ever heard of.

LYRICS TO KNOW: "The laws of the world have never stopped us once"

THE VIDEO VIBE: Beyonce and co. revolt against "The Man."

SCENE TO KNOW: The shot of Beyonce and her gang including Kelly Rowland, Michelle Williams, and Pharrell Williams

LYRICS TO KNOW: "Heaven couldn't wait for you"

THE VIDEO VIBE: Set in a church and then a cemetery with happy flashbacks, this is the video where you start crying uncontrollably while you watch.

SCENE TO KNOW: Beyonce entering the chapel in some Chanel pre-fall '13 look 76. Even when she's tearing up, Beyonce looks like a queen.

THE SONG VIBE: The national anthem of Blue Ivy

LYRICS TO KNOW: "When I look in your eyes, I feel alive"

THE VIDEO VIBE: Footage of Beyonce's trip to Brazil

SCENE TO KNOW: When Bey gets up and dances with a youth soccer team

THE VIDEO VIBE: The ultimate archive of adorable Beyonce footage meets the internet

SCENE TO KNOW: The one pictured above--crown, Chanel Haute Couture dress, trophy, scotch... what more do you need in life?

NEXT UP
The Art Issue 2022
From Renaissance To Gemini Rights: The Stories Behind 2022's Best Album Covers
Entertainment
Megan Thee Stallion Says A New Album & World Tour Is Coming In 2023
Entertainment
NYLON's Favorite Songs Of 2022
Entertainment
The 20 Best K-Pop Releases Of 2022