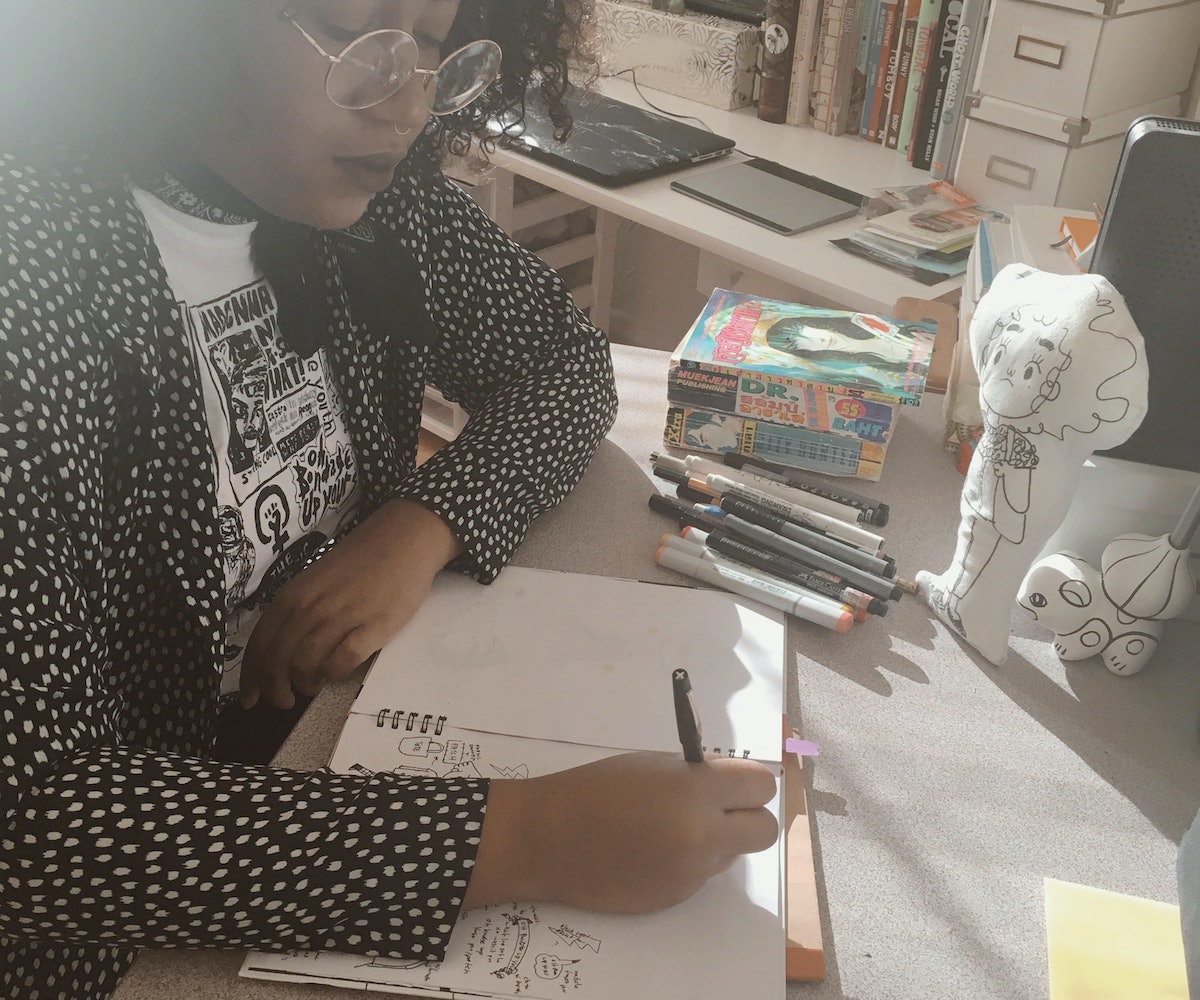 Up until recently, I was unfamiliar with the work of Bianca Xunise. But then, as fate in the digital age would have it, I randomly scrolled upon one of her drawings in my Twitter feed (see below). The comic strip showed several generations of black women in America and explained their role in shaping the country. I saw it after the presidential election when a lot was consuming my mind, but I mostly felt numb. It wasn't until I saw this illustration that I finally felt a sense of empowerment again.

"When I was drawing that comic, I was thinking about some of the anger that I had throughout this election. I was really inspired by my grandmother who only finished third or fourth grade and went on to work in the factories," says Xunise. "One day, they laid off all the women who were working in the factory. She started her own business, and she was like the neighborhood seamstress and she baked pies."

Xunise is based in Chicago, where she was born and bred. The 29-year-old was raised in an artistic household as the descendant of generations of creatives. She acknowledges that coming from this type of background is a privilege, and never takes it for granted.

Xunise's family also has Creole roots, which she nods to in her "merde" beret design. (Xunise confesses that, for her, there will always be a push and pull with her French side, because of the knowledge of the imperialism that comes with that sense of pride.) "We are artists all the way through," she says. "It's kind of all just how we talk."

Xunise was never really aware of the concept of being an artist. It was merely an extension of how she communicated to the people around her. She adds, "It was just part of who I am, in the same terms of nobody really needed to tell me that I am black and I knew that I was. In the same way, nobody needed to tell me I was an artist, I kind of knew that I was. So it was a way of how I expressed myself, and it helped with how I expressed my feelings."

Growing up, Xunise was shy to the point where she would get anxiety from trying to talk to people. "My throat would tighten up and I couldn't speak," she says. So instead of talking, she would draw to get things off her chest.

Xunise came back to her home base as a transfer to the University of Illinois at Chicago where she studied graphic design; she liked being back in Chicago, but it bothered her that there was only one other black student in her graduating class. She'd reached a point where she was exhausted being in environments where the only other person of color she saw was herself.

Despite all this, Xunise managed to grow into her own identity. She recalls how she didn't start wearing her hair natural until she entered college. It was also in college that Xunise "really started to care about being more actively black." Her wardrobe became influenced by Solange Knowles with bright suits and chiffon button-down shirts, and she pushed her looks into more of a genderless category. Most importantly, though, college is where Xunise learned about intersectionality and how it applies to feminism.

"College is so important in terms of figuring out who you are," she says.

Xunise draws every single day, spending anywhere from four to 10 hours honing her craft. She believes it's important to actively give herself time to draw so that she always remembers why she loves doing it; this also helps her break away from shortcuts and habits that can develop when artists stop challenging themselves.

Her drawing style stems from 1960s cartoons that featured simplistic circles, squares, and triangles. Xunise's vision comes from a place of creating things that instill a sense of calmness; she explains that "calmness in cuteness" relates to our obsession with memes of babies, cats, and dogs.

"It's cute, so it kind of calms you down," she says. "It's almost like my way of being non-threatening because it's cute, but I'm going to tell you something. It looks cute, but you're going to read this and be like, 'Wait a minute.'"

Xunise is also influenced by graphic artists like Tove Johansson, Ludwig Bemelmans, and Naoko Takeuchi. As a result, her work also has a touch of sweetness. But with everything Xunise draws, there is always a theme of duality—the cute can be political too.

Aside from all the drawings and doodles that fill up her Instagram page, you'll also see Xunise's impeccable sense of style. She describes it as ever-evolving with a "boringly eclectic" vibe, driven by a keen interest in vintage clothing. Xunise says she's tried to be minimalist, but then she winds up putting more things on. Considering that her mother is a fashion designer, this is clearly in the artist's genes.

On the side, Xunise has an Etsy shop where she sells her drawings in the form of prints, posters, and pins. She funds her shop through the extra money she earns from her work but refuses to depend on it as an income. One of the best pieces of advice that Xunise's mother told her was: "Once your art loses its art and it just becomes money, it loses who you are."

She points out how women were the real pioneers of the pin movement with enamels, citing Robin Eisenberg, Sara Lyons, and her friend Tuesday Bassen as some of the modern-day leaders.

"Women are working so hard to just have our voices heard in the art community," she says. "It's so strange to see that it's difficult."

Xunise recently designed an "unapologetically hood" pin that represents "hot chip fingertips." She adds, "I am from Chicago, I am from the South Side. Like, here is my hand covered in Cheeto dust that is now glitter, enjoy it."

And as far as the election is concerned, Xunise has one word of advice for everyone: "Stop apologizing for your blackness and stop apologizing for not being represented or being marginalized." Xunise won't be consumed by the burden of black guilt—and we know that if she ever is, a cute but cheeky drawing will probably come out of it.