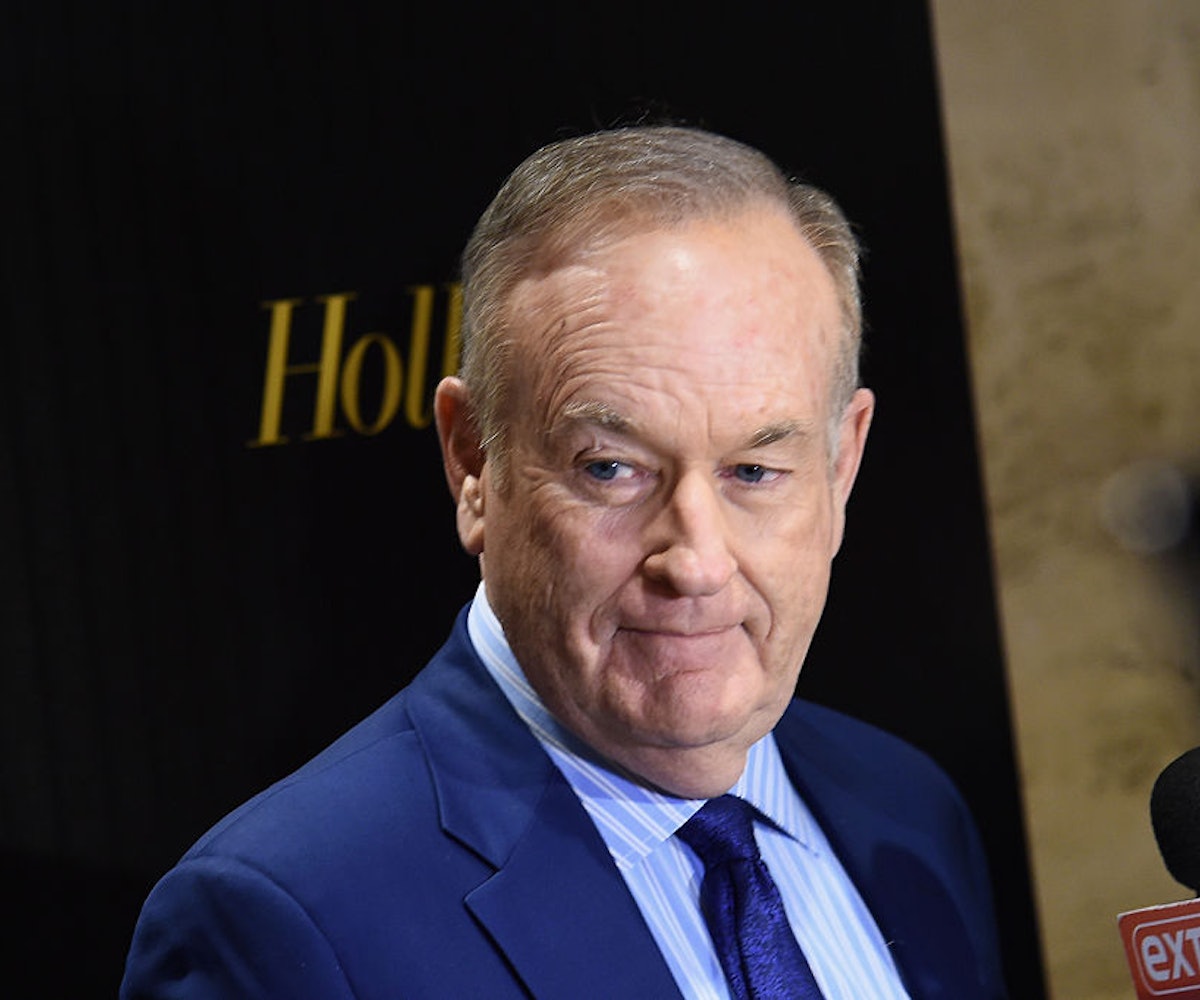 Over the weekend, the New York Times ran a story about Fox News' Bill O'Reilly, an anchor who the Times rightfully calls Fox's "top asset" and who has spent two decades "building the No. 1 program in cable news for a network that has pulled in billions of dollars in revenues for its parent company, 21st Century Fox." O'Reilly is known for his strongly conservative views and his argumentative nature. He is also known for racist and sexist commentary, as when he recently mocked Representative Maxine Waters' hairstyle as the congresswoman spoke about the discrimination and constant undermining that affects so many people in this country—specifically people of color. Irony, thy name is Bill O'Reilly.

All of this is to say, that even if you only have the vaguest idea of what Bill O'Reilly represents, you still should be pretty much aware of how despicable he is. He is the personification of the type of white male entitlement that makes it possible for a corrupt former reality TV show star with the vocabulary of a six-year-old to become president, or for a real estate scion whose only professional experience is destroying a once-revered newspaper to think they're qualified to "overhaul the federal bureaucracy, reimagine Veterans Affairs, modernize technology used by the federal government, develop 'transformative' infrastructure projects, and fix the opioid crisis." Hubris, thy name is underqualified white guys.

Also in the Times piece, came the news that, between the years 2002 and 2016, O'Reilly and 21st Century Fox paid out approximately $13 million to five women who brought sexual harassment or otherwise inappropriate behavior lawsuits against O'Reilly. Let's let that sink in: thirteen million dollars.

The Times makes clear that because O'Reilly is such a lucrative property for Fox, the network is eager to settle suits which have alleged, for example, that O'Reilly promised professional advancement to one woman, which he then rescinded after she wouldn't join him in his hotel suite. Rather than lose O'Reilly and all the millions of dollars he brings into the network, Fox throws money at the problem and allows an alleged predator to continue in his high-profile job. O'Reilly dismisses the allegations brought against him by claiming that it's simply a function of being in the public eye (which, you know, there's plenty of men in the public eye who have faced no such thing), a defense that is all too similar to the one Donald Trump has used when it comes to the women who have accused him of sexual harassment and assault.

The accusations against O'Reilly (and, for that matter, Trump) matter, though, because they clearly demonstrate the lengths to which those in power will go in order to maintain the status quo—even if that status quo consists of men who are routinely accused of harassment. It's a sad reflection on the state of our society, and of the fact that most abuse takes place not in the open, but quietly and secretly—all the better to keep it hidden, so that the powers that be can direct the public's attention away from the ugliness right in front of them, and on to something else.