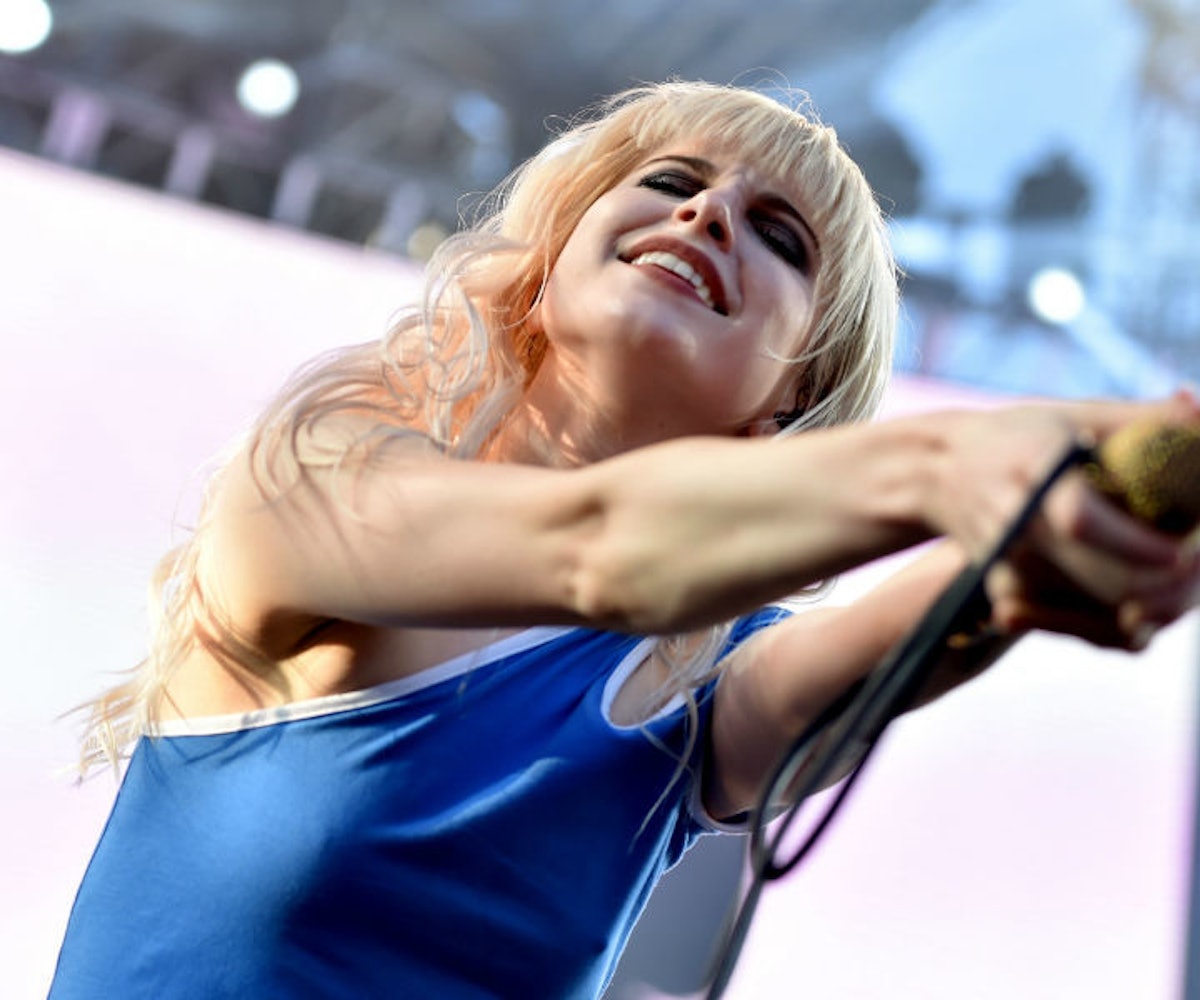 “Y’all aren’t coming in here, are you?” a Barclays Center employee asked my roommate and me as we walked inside the Brooklyn venue, heading swiftly toward the Paramore concert. “Actually, we are,” we replied.

Maybe his confusion came from the fact that neither of us has brightly colored hair or visible tattoos or an aesthetic similar to that of any members of Paramore or the band's legions of fans. Shoot, we weren’t even wearing Vans. But while that question might have been posed because of our dissonant style choices, more than likely it was asked because we are black. And since when do black people like Paramore?

If you ask anyone on Twitter—specifically black Twitter—the answer will be always. Black people have always liked Paramore, but it's only now that we're becoming more and more comfortable talking about it. This conversation has been going on since March when one user sent out a simple one-line tweet: “Black people love paramore.” It went viral, racking up over 8,000 retweets, almost 24,000 likes, and a reply from Hayley Williams, who tweeted: “Just made my pale ass’s day!”

In June, Eve, or @localblackgirl on Twitter, tweeted the same thing with an additional note: “If you find a black person who doesn’t love paramore they dark white.” That's been retweeted over 4,000 times and liked almost triple that amount. And just like that, the #ParamoreHive became bigger, and a whole lot blacker.

Eve tells us that she became a Paramore fan around the same time most people did: with the release of “Misery Business” in 2007. However, as much as she loves the band, she didn’t expect her tweet to do the numbers it did because, well, she didn’t realize so many other black people listened to Paramore, too. “I really thought I was alone!” she says.

In some ways, Eve says, it’s a natural evolution for black people to feel a kinship to rock-adjacent music—especially considering black people are the originators of the genre. “I won’t lie, I didn’t think it was common for black people to listen to rock, let alone Paramore,” she says. “And then when I found out that black people actually created the genre, it made me feel like, Wow, so not only are there black fans of rock music, but we actually started this. I think that’s one of the reasons why we connect with the genre more than people assume.”

Musical artist Princess Nokia made a similar connection when she was interviewed by Dazed about her new emo mixtape A Girl Cried Red. When asked why emo music speaks to brown kids, she responded:

And this is why it's been so satisfying recently, as black fans have been vocal about their love for Paramore and black artists have been reclaiming their musical legacy. Along with Princess Nokia’s latest project, others like Lil Uzi Vert (who happened to record himself recently singing Paramore’s “Ain’t It Fun”) and Rico Nasty have been ushering in this new post-emo, rap-rock era featuring tons of angst and feelings.

And then there's just the fact that many people are drawn to Paramore because of Williams. Avril Lavigne may have been the first pop-punk princess I can recall, but Williams is the one that sticks out most in my memory. From her guttural screams on “All I Wanted” to her soft lullaby vocals on “The Only Exception,” she’s always had the range. “I think that African-Americans love a good versatile singer with great vocals,” Sasha Jackson, a devoted Paramore fan since middle school says. “They have something we don’t usually hear in a rock band… and I’m not gonna lie, the band has some soul. The lyrics in her songs are engaging and complex.” I also don’t think it’s a coincidence that the song that seems to be the most popular from the band amongst black people—“Ain’t It Fun”—happens to feature what sounds like a black choir during the bridge.

Jackson also had a viral Paramore tweet—only this one came with a video showing a buff black guy, shirt off, towering over Williams, ready to go lyric for lyric against the singer on “Misery Business.” Once the beat drops though, Williams fades into the background as he takes center stage, jumping up and down and addressing the crowd like he’s the one they’ve all come to see. If you ever meet someone with any lingering doubt of black people’s love for Paramore, just show them that video.

Just last week, two months following my experience at Paramore's Barclays concert, I got a cosmic Facebook reminder about my own love for the band. Ten years to the day, I used a problematic “Misery Business” lyric as my status (you know, the one Williams has since apologized for). This brought me back to a tweet I saw in response to Jackson’s viral moment: “Y’all did not have this same energy when my emo ass was listening to Paramore back in 9th grade.” And that's probably true! But we're here now, ready to make up for lost time.

The original headline of this article was changed after we were alerted to the fact that it had already been used for a different piece by Clarissa Brooks on Medium. Speaking of which, if you want to read more about why black people love Paramore, check out Brooks' essay here.