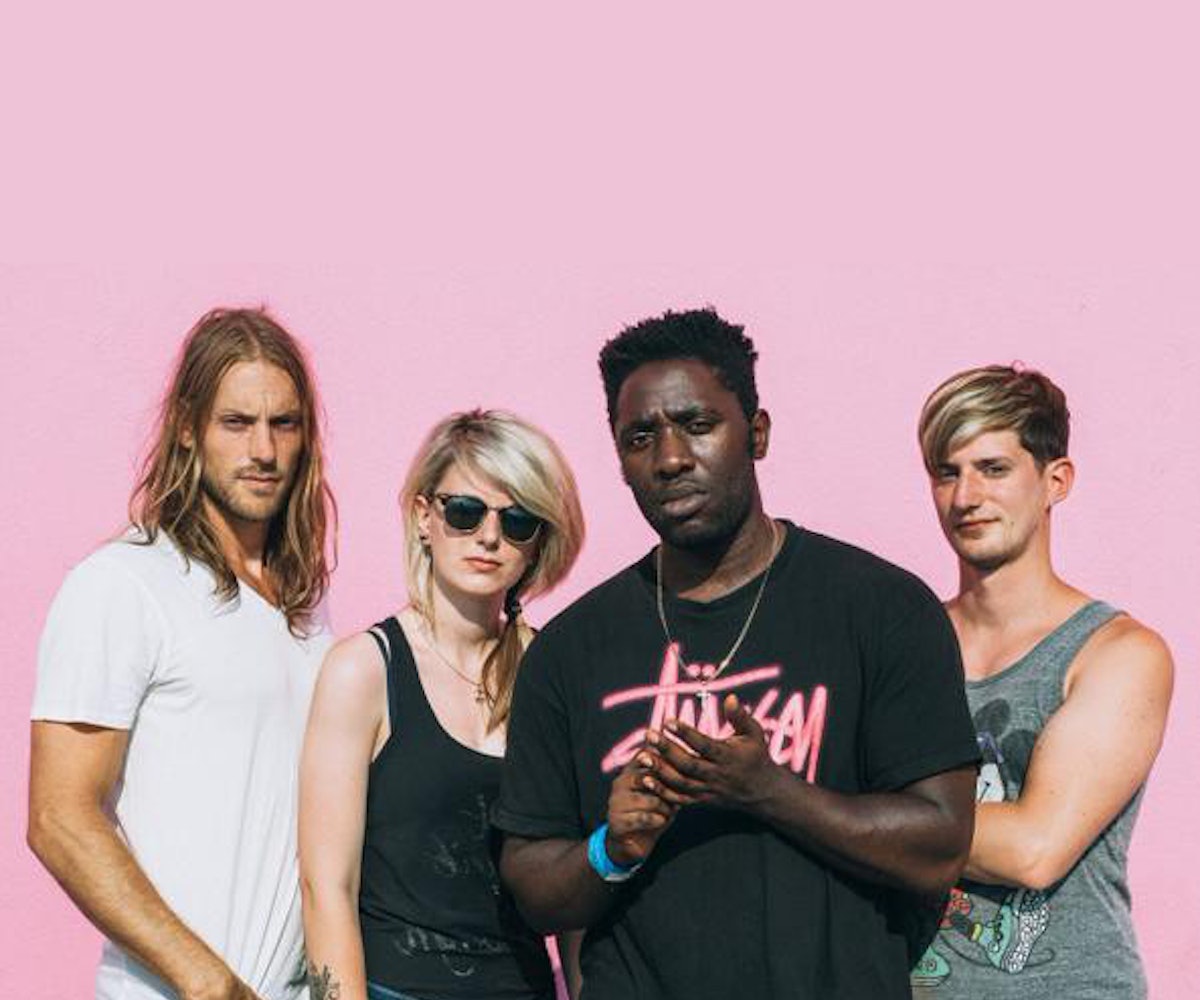 It’s been four years since Bloc Party released a studio album—long enough for fans of the indie rock four-piece to become worried. Bloc Party supporters had honed in on the tensions that were brewing inside the band, and when words like “hiatus” and “line-up changes” were thrown around, they started to panic. It was a glimpse back to 2009, when the London-based project found themselves in between recording contracts, taking a break to pursue their own individual endeavors. But though things looked dire on the outside, lead guitarist Russell Lissack tells us that the plan was always to keep the band going; there were just a few kinks that needed to be worked out.

Shortly after the 2012 release of Four, Gordon Moakes and Matt Tong parted ways with the band, and Lissack and lead vocalist Kele Okereke went off in search of suitable replacements. They landed upon bassist Justin Harris of the Portland indie rock outfit Menomena, and 21-year-old drum prodigy Louise Bartle, who they discovered via a YouTube video. Once the band had been restructured, the founding members polished up a collection of new tracks that they had started working on in 2014, taking them back to the early days of writing as a duo. Alas, their fifth studio album, HYMNS was born. The album, which dropped on Friday, charts new territory for the newly remodeled group. “Our previous record was a noisy, chaotic record, and so this record is a reaction to that,” say Lissack, who describes Bloc Party’s current musical direction as “spacious and atmospheric.”

We caught up with Lissack to discuss how the current Bloc Party lineup feels like a rebirth, and why fans will love HYMNS.

What was the inspiration behind HYMNS?

Lyrically, Kele has taken a lot of inspiration from his childhood. He grew up in quite a religious household. It’s not something that he follows anymore but obviously your childhood is your formative years so it’s a part of his life that he’s been looking back on and kind of reinterpreting. I don’t think it’s a religious record; I think it’s more of a spiritual record. But there are certainly some relevant things there. In terms of musicality, I think it’s a very eclectic record, this one perhaps more so than any of the others. Between us, we’ve been listening to a lot of electronic music. Kele was listening to some Gospel music and classical music so there’s a broad spectrum of influences that we’ve been inspired by.

Musically, how different is this from your previous release, Four?

I don’t think any of our records sound much like the record before them. Our process has always been to try and do something different that we haven’t done before. Our previous record was a noisy chaotic record and so this record is a reaction to that. We wanted to do something that is a lot more spacious and calm.

The band has been together for 16 years but started out originally with you and Kele in the studio. Given given the changes that occurred after Four, the two of you got the chance to reconnect with that original vibe and write this album as a duo. What is fun to revisit those early ways of doing things?

Yeah. Predominately it was Kele and I. But the bass player Justin was also involved. When we got him involved in the process, we started sending him songs because he was living in Portland at the time. He certainly contributed some ideas and was involved in the recording but the bulk of the songwriting was done in late 2014 and the first half of 2015. Kele and I were meeting up once a month, sometimes twice a month, to go into the studio for a few days and do the writing together. It kind of did harken back to our beginning days when we first met but in a way, that’s always been a part of the songwriting process for us throughout the last 10-12 years. Even though we’ve done writing with a group of four people, there’s also been a lot of times when it’s just been him and I sitting together and writing on stuff. So it didn’t feel alien or unnatural. It kind of felt like what we always do.

How did you track down the two newest members of the band?

We met Justin, who plays in a band called Menomena, when we toured together in the US in 2009. And we got on really well and saw that he was a great musician at that time. Kele had stayed in touch with him in the interim and so when we started making this record and we needed a bass player, he was the first person that sprang to mind. And Louise, our new drummer, we didn’t meet till during the recording process. The recording was coming to an end and we realized we needed a drummer now, as we were gearing up to go out on tour. We were asking around if people had any recommendations and someone sent us some videos that she had uploaded to YouTube of her playing and we were really impressed and asked her to come down to the studio to see what she was like as a person. And she’s lovely. Then we had a jam, which went really well and we took it from there.

You’ve had all kinds of fan reactions to adding new members. Some got really mad. Others are hopeful. What’s the feedback been like? Are you looking forward to showing off the new Bloc Party and reassuring the fans?

Yeah. From my perspective, feedback has been great. The first shows we did with them were in September. We did a few shows in California. Everyone was quite nervous, as we hadn’t played together before. But the shows went really well and people reacted really well to Justin and Louise. I think it’s hard not to when you actually see them playing. Louis is only 21 and she’s already a fantastic drummer. A lot of our music, especially the back catalog, some of it is technically quite impressive so seeing someone so young being able to play it is great. And then Justin, he’s a brilliant bass player and he plays a variety of other instruments as well. So the reaction on that front has been great. And the other thing, which I’ve never really experienced before, is a lot of people have been coming up to me and saying that it looks like we are having so much fun on stage together, which is really nice to hear.

The band had a rough couple of years. You took a hiatus after Intimacy, another after Four, and then you lost a few members. Do you feel like you’ve grown stronger as a band as a result of having survived all that?

Yeah. I think we’ve definitely grown stronger. We reached a point in 2013 where the only option was either the band stops, or the band changes. And obviously we went for the latter option and now we’re able to continue. Everyone is feeling a lot happier and able to enjoy what we do a lot more than the last few years. They weren’t all bad but there was certainly a lot of unspoken tension and negativity. So to be able to move past that has been a relief for everyone.

Do you feel like the band has been reinvented and has a new sense of life to it?

Yeah. It feels like a rebirth. It feels like that energy and that excitement that started it all off, it’s gone back to that point again. Everyone is super excited to get out there and start doing the shows. Everyone is enjoying one another’s company. We’ve already started working on new music with the four of us. We’ve been grabbing every spare moment that we have at the moment to work on new stuff. A lot of new ideas have come around so everyone is feeling really positive at the moment.

Back in that 2013 when you were trying to decide what the next move was, was there ever a time when you thought the band wasn’t going to make it?

I think from the outside it probably seems a lot different because of the timeline, but from our perspective, as soon as we finished touring in 2013, Kele and I spoke and we decided early on that we wanted to carry on. And we took the time to sort things out and took the time to have a rest, do our thing, spend time with our families. But when we took a break after our third record around 2009, at that point, it felt very uncertain. It was a lot of complications over several months about what was going to happen next. That felt very up in the air, whereas this time around, we discussed very early on what we wanted to do next. And then we started working on new music in 2014. So it felt much more certain this time around.

I think fans hear the word hiatus and they panic.

Yeah. It’s funny because you gauge time differently as you get older. But from our perspective, we’re doing things and people don’t necessarily know that we’re doing them. From the outside it’s like, “Oh you didn’t put a record out since 2012. You didn’t do anything for four years.” And then for us, we are doing things in the interim, they are just not being done publicly. I guess now more than ever because of social media, people have an expectation to want to know what is happening, to have a level of information that they might not have in the past. People tend to then jump to their own conclusions.

This new album has a very live feel. And you’ve been doing some very innovative things with your guitar this time around. For instance, on “The Love Within,” your guitar lines sound almost like synths. How would you describe the sound on HYMNS?

It’s hard to describe I think because that’s what makes it a record. It has a lot of different types of sounds and a lot of different types of songs. I think there is probably a very atmospheric feel to the entire record in general. There are a lot of guitar effects that personally I think are very unique and haven’t been heard before. I’ve also quite liked the idea of trying to make the guitar sound as much like a synthesizer without it being a synthesizer. Spacious and atmospheric are probably the key words that describe this record.

What are you doing to get these effects?

During the time off, I went on a bit of a mission to try and discover some more off-the-beaten-path guitar effects that I could use. I had a custom board built as well, which meant that I could start manipulating the sounds with my hands as well as my feet. That was quite a game changer. Traditionally you’re limited when you’re playing the guitar by what you can do with your feet but when you have the dexterity of your hands as well, it opens up almost limitless possibilities.