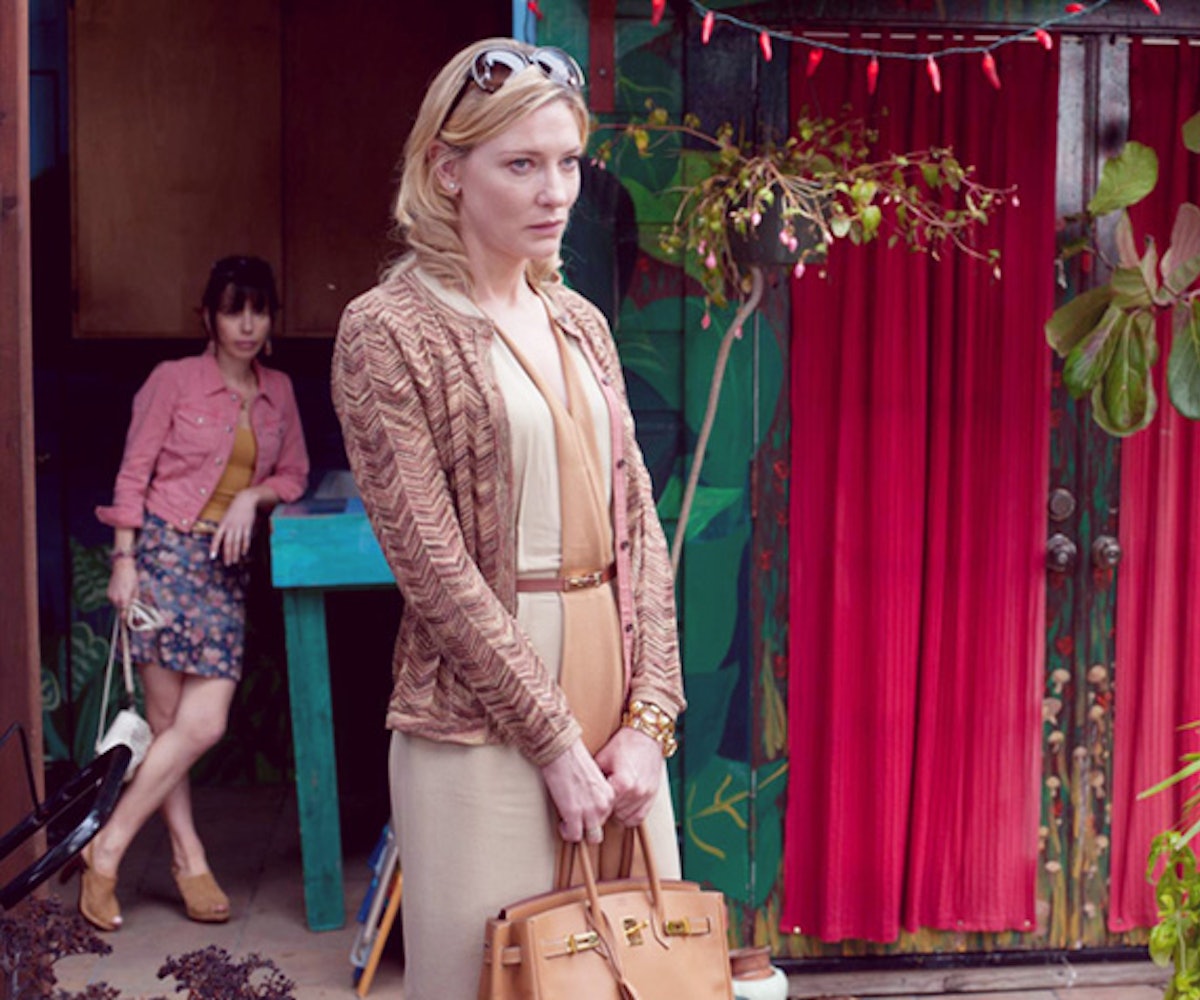 annah Horvath might still be a bit of a mess, but even she's ahead of Jasmine, the seriously stressed out heroine of Blue Jasmine. Played by Cate Blanchett, Woody Allen's kinda-sorta protagonist (you don't know whether to love her or hate her) takes the midlife crisis to the next level, complete with sweaty breakdowns, awkward webs of lies, and more than enough hands-covering-eyes cringeworthy moments. But wait, before we go TOO far, let's start from the beginning.

The film follows Jasmine and her husband Hal (played by a smooth-talking Alec Baldwin), who are living the Manhattan high life thanks to Hal's lucrative, but undeniably shady, business deals. He's sketchy in everything he does, including duping Jasmine's sister Ginger (Sally Hawkins) into fake investments and cheating on his wife with lots of younger women.

However, Hal eventually gets caught; and once he does, Jasmine's on her own. She's lost her reputation, her snooty friends, and has no other choice but to relocate to San Francisco and move into Ginger's crowded apartment.

The stuff that follows is classic Allen: flashbacks to Jasmine's old life, class struggles between Jasmine and her sister's blue collar boyfriend, and enough neuroses to keep anyone up at night. Jasmine's dealing with the shock of having to leave her dream world for a cold reality, and we're here for the unfortunate wakeup call.

Borrowing key themes from A Streetcar Named Desire, the film is a character study into the depths of Jasmine's complicated history—thanks to Cate Blanchett's compelling performance, it totally works. Whether she's fending off advances from her squirrely new boss or piling lies upon lies in order to get another rich husband, she isn't a likeable character at all. Yet even when she's throwing back Solo cups filled with Stoli vodka, we can't help but root for her (and not to mention, covet her wardrobe). Despite all her issues, Jasmine still manages to wear her Chanel jackets and Fendi suits with the pompous air of someone who would shop at Barney's... even in the midst of a mental breakdown.

You'll leave the theater with a lot of feelings after watching Blue Jasmine, but if there's one thing we know about Woody Allen, it's that style and substance definitelydon't have to be mutually exclusive. This slick film is the perfect example of that.