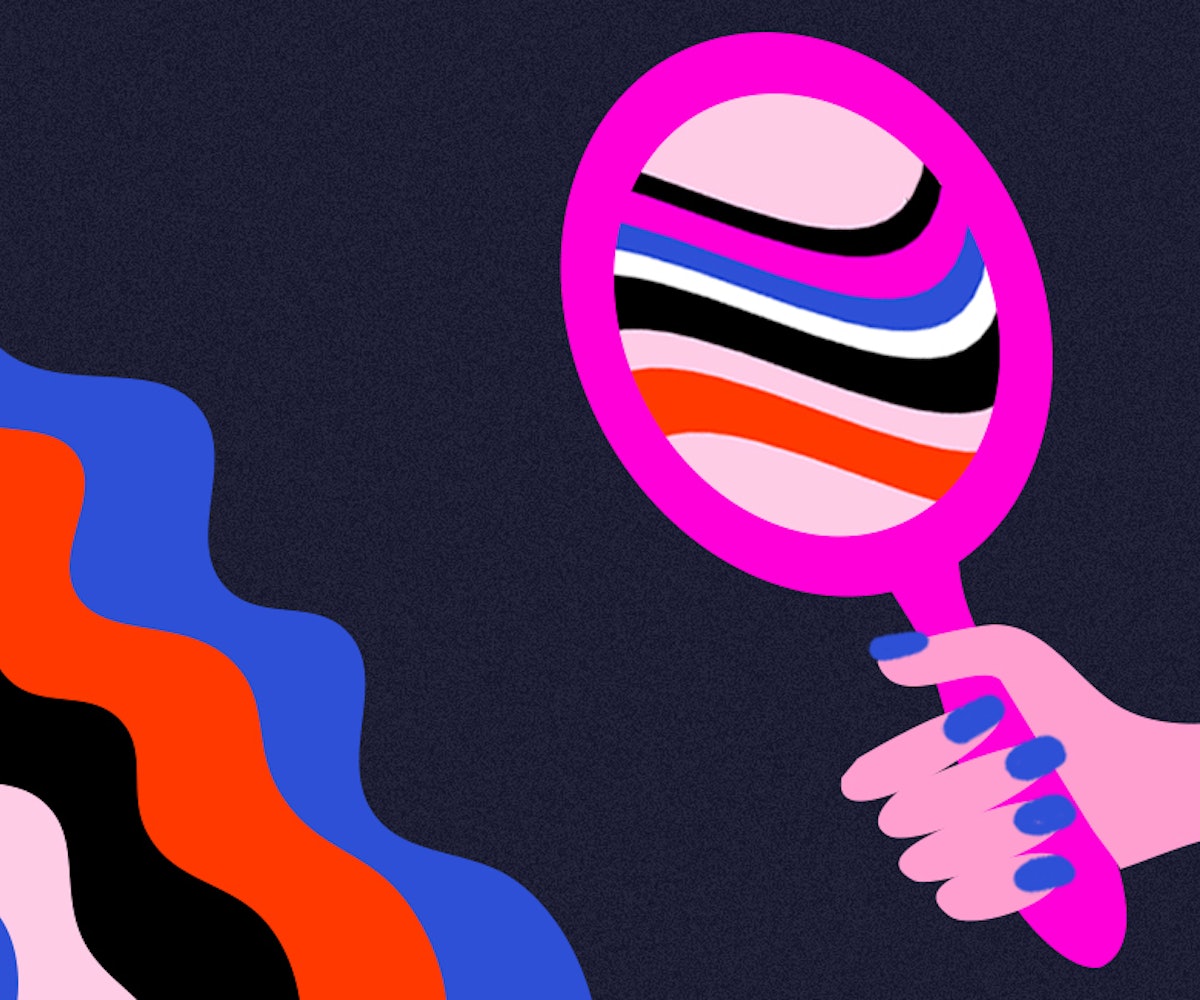 Every day after high school, like clockwork, I’d hurry off the bus to see if my monthly Teen Vogue or Seventeenmagazines were waiting for me at my designated spot at the dining room table. As I flipped through the latest issues, I reveled in the pages. Riddling the magazine with dog ears, I bookmarked the homemade masks I wanted to try, outfits I wanted to thrift, and models I wanted to emulate. It probably seemed insignificant to many of the adults around me—I was just a young girl who, like a lot of other young girls, loved beauty, and all things feminine and frilly. But in truth, I was crafting a safe space for myself in the form of self-care and beauty routines.

For me, fashion and beauty was a sort of escapism. It was my own little corner of the world where, if only for a little while, I could leave behind the domestic and sexual violence that had quietly permeated my childhood. I cherished rare moments of solitude when I could brush my hair and curl it, without feeling the sting of it being pulled in anger. And I could put on makeup without having intense, dissociative flashbacks to my father’s abuse. These moments I spent caring for myself, or getting lost in the pages of a fashion magazine, were the only time I allowed myself to feel connected to my body. Otherwise, it was just too painful. I wasn’t even sure what was there to connect to.

I stopped being able to really see myself in middle school. It started slowly, and it seemed innocuous enough, but the way I saw myself in the mirror started to morph, and I began to hate what I saw. My self-care routines started to frustrate and upset me the longer I had to stare at my reflection. It seemed like every other week, I was recycling every clothing item in my closet because I looked “hideous.” At first, I chalked up my growing anxiety and obsession about my appearance to normal adolescence. Little did I know, this went way beyond normal teen angst, and I reached a new low when, while shopping for a family vacation, I felt the walls of a dressing room start to close in around me. Managing to only hold back my tears and panic until I reached my mother who was sitting a couple feet away in a waiting area, I felt the crushing weight of depression and disgust hit me. I waved off my mom’s concerned hands and expression, as I thought to myself, I’d rather be dead than have to live in this body.

It’s not unusual for those who live with BDD to go to extreme lengths to “fix” their appearance. “Someone with body dysmorphic disorder may spend hours camouflaging the perceived issue with clothes or makeup, or picking at their skin to make it smooth. They might also seek out repeated cosmetic procedures with minimal satisfaction,” explains Dr. Caroline Fenkel, from Newport Academy. She adds that “most people with BDD refuse to be in photographs, or they heavily edit their images on social media. Body dysmorphic disorder is a very serious mental illness that needs to be addressed and treated by a professional.”

People with body dysmorphic disorder are written off as egotistical and self-centered, but this couldn’t be farther from the reality of what living with this mental illness is like. Dr. Stephanie Zerwas, Ph.D., the clinical director of the University of North Carolina’s Center of Excellence for Eating Disorders, says, “I’ll hear, ‘People with BDD are vain or people who have BDD are just selfie-obsessed.’ [...] But, I think if anyone hung out in the brain of someone with BDD, they’d quickly realize how brutal and exhausting it can be.”

Following that instance in the dressing room, body dysmorphia became more frequent in my day-to-day life—and not only when I was in search of beach attire. Everything from washing my face to styling my hair and getting dressed before school in the morning turned into a trigger. I showered once a week, if that, and tried to stare at the droplets of water ahead of me to keep from panicking about my body. Simple activities I once enjoyed like putting on makeup or taking care of my skin became incitements for back-to-back binging-and-purging episodes. If I happened to catch a glimpse of myself in the mirror, or dared pick up a fashion magazine, an obsessive spiral would eventually lead to cutting or threats of suicide.

My mother had suspected my body image issues went way beyond that of a normal teenager’s, so when I was diagnosed with bulimia and body dysmorphic disorder at 14, it came as little surprise to either of us. Body dysmorphia became an all-devouring problem I couldn’t control, stop, or even think to manage. Bit by bit, my mental illness chipped away at the love I had cultivated for self-care and beauty—something that had once been a safe haven for me, and an escape from my father’s abuse.

It wasn’t long before my eating disorder became dangerous, and in just a few months, I was sent to my first inpatient psychiatric clinic. I moved through the motions of my mental health treatment, but experienced relapse after relapse. It took years for me to realize that my body dysmorphic disorder was insidiously developing long before I received my actual diagnosis. My very first memory of thinking I looked “deformed” was as a toddler—staring down at my thighs while I ran through a sprinkler in my backyard—soon after my abuse began.

As one study discovered in 2006, just shy of 80 percent of people with body dysmorphic disorder reported experiencing childhood neglect or abuse. What’s more, a more recent study reiterated that abuse may be a potential risk factor when it comes to developing body dysmorphic disorder. (Research has shown a strong correlation between bulimia and sexual abuse, too.)

Learning that my body dysmorphia was rooted in trauma helped me make sense of all the shame I harbored toward myself, and my appearance—shame that pushed me into a relationship with a deadly eating disorder. Like many young trauma survivors, I turned the constant anger and sadness I felt inward, rather than toward my abuser.

Recognizing the role trauma has played in my body dysmorphic disorder and bulimia set me on my path toward healing. Though it hasn’t been an easy feat, rediscovering my childlike love of all things fashion and beauty has become foundational for my recovery. There are still many days I can’t recognize myself in the mirror, or feel as though I can't trust my reflection. And, truth be told, maintaining recovery with my body dysmorphic disorder is agonizingly difficult when you share your abuser’s eyes. However, making self-care an integral part to my recovery has been life-saving.

I’m not suggesting beauty, fashion, and self-care routines are the cure-all for body dysmorphic disorder—years of trauma therapy, additional mental health treatment, and homing in on mindfulness skills have also been essential to my healing. But for me, it's a form of therapy and an affirmation to myself that I will not let my abuser continue to control me, or spoil things that I love to do.

Doing my skin-care routine, putting on makeup, and wearing clothes I love, is—in spite of my body dysmorphia—my persistent reminder to my body that I will take care of it, I will honor it, and I will see it for being what it is: beautiful, because it’s mine.

NEXT UP
Life
Bella Hadid Says She Is "Not On This Earth To Be A Model"
Fashion
17 Regencycore Fashion Finds To Channel Your Inner ‘Bridgerton’
Fashion
Bella Hadid Is Making Her Acting Debut — UPDATE
Life
Christine Quinn Exits Selling Sunset, Marks The End Of An Era