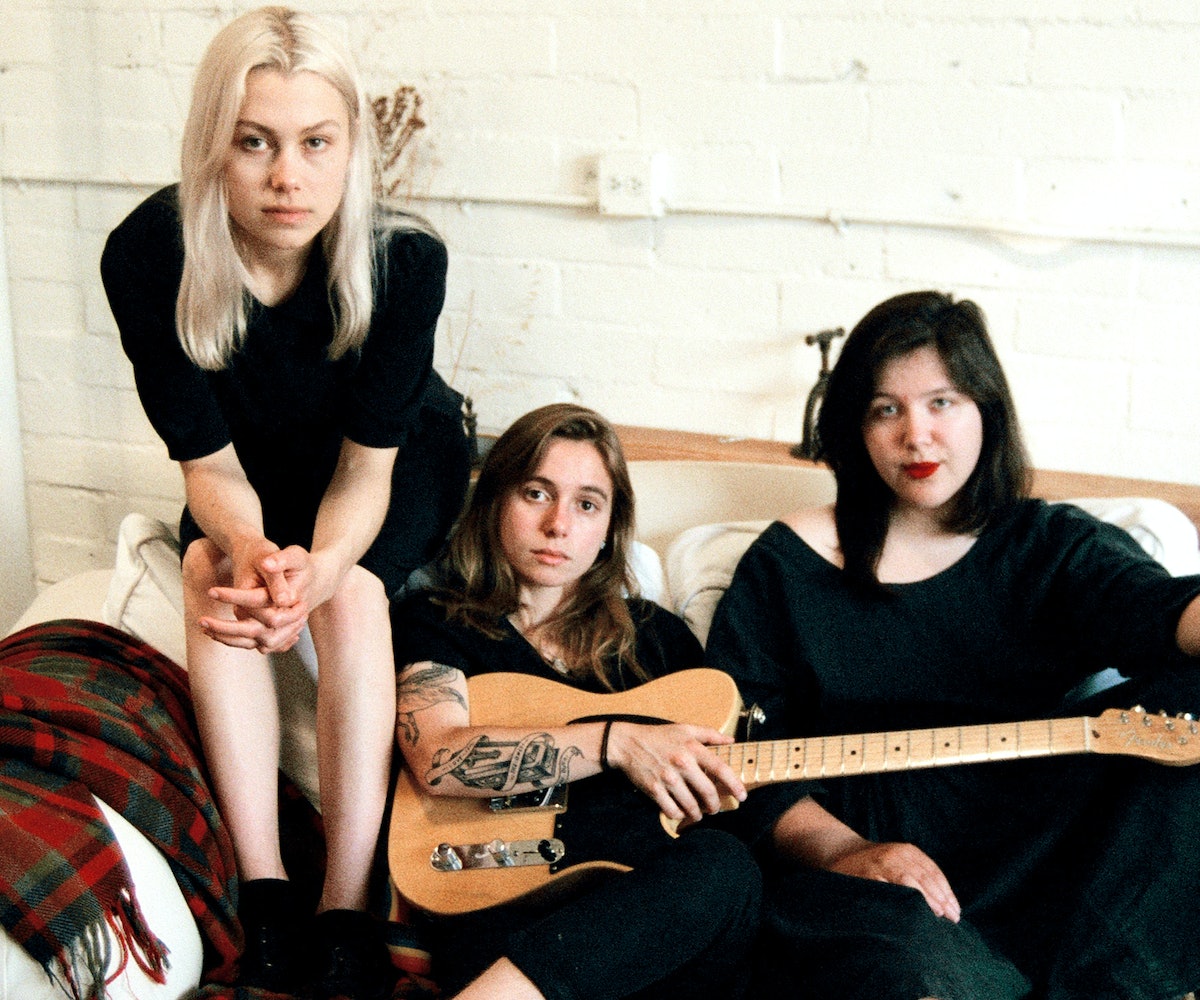 When, in an individual, creativity is allowed to run wild, something interesting can happen. The ego goes unchecked, because the artist is unafraid to put forth their ideas—there’s no risk of collaborators rolling their eyes. And so uninhibited innovation can occur. This is the privilege of the boy genius, the virtuoso who is allowed to create in an unlimited way. And unfortunately, it's a privilege rarely afforded to women (that's why they're called "boy geniuses"), which is why three incredible women are now claiming the term for themselves.

Julien Baker, Phoebe Bridgers, and Lucy Dacus have chosen to harness the unlimited possibilities allowed of boy geniuses not only in the naming of their “supergroup,” a new project created out of the coincidence that they’d booked a tour together as solo artists, but also in the group's eponymous EP, boygenius.

Collaborating with each other only seemed natural once the tour had been booked. Baker explained that they knew they should create something together, and began throwing out ideas for projects. “It just sort of snowballed,” she said, and the three quickly nixed the simplest options—a cover or a live collaboration—and ended up creating an entire EP of their own, which allows each of the women's creative talents to amplify one another's and evolve into something even greater. It's a powerful thing to listen to, and a reminder of the absurd way in which the three women's sounds are often compared interchangeably—a case of gendered over-essentialism in the music industry. “When our voices—our literal voices, our figurative voices, stylistic voices—are placed next to each other, you’re able to see the contrast very starkly,” Baker said, “and it dismantles the assumption that all of us sound the same.”

The three have long been friends, Baker having met Bridgers when they played Eagle Rock in L.A., and Dacus when she opened for Baker in D.C. “You never know how an artist that you admire is going to be,” Baker said of Bridgers, “but, she's the most down-to-earth and congenial person.” Baker admitted to having a deeply emotional reaction upon hearing Dacus play for the first time, hearing “Map on a Wall” and beginning to cry, “like that cry that sneaks up on you, because you didn’t know you were that emotional, but now, all of a sudden, there’s tears.”

Baker opted to keep in touch with Bridgers and Dacus via “long-form letters” over email after befriending them, continuing to “grow in and out of each other's orbits” in their shared music scene, finally winding up all on the same bill this fall.

Until it was time to record, the trio had yet to be in the same room together all at once. One day to meet as a unit, plus four days to record, was all it took for the six tracks to be laid down. And it also became clear they could support each other in ways that transcended music. “All three of us have dabbled in self-doubt,” Dacus said, explaining that, by joining together on this project, the three women could hone in on all the positive aspects of a boy genius by instilling confidence in one another.

Each brought two songs—one completed, one loosely formed idea—to the group, resulting in an EP with great range in sound, yet completely cohesive and encapsulating of each of their talents. With the full project sent off into the world in a surprise release last Friday, listeners can finally experience the magic of beginning with, what Baker referred to as, “the most capital-R Rock song,” Dacus-written track “Salt In The Wound,” and then winding down with the haunting, Carter Family-inspired “Ketchum, ID,” a Bridgers concept.

As a completed work, it’s gut-wrenching, gloriously depressing, the kind of EP I imagine queuing up as I lean my head against a car window during a rainy drive through the country. It nearly becomes too good to be true, knowing how organically and hastily these six tracks were brought to life. I do not want to believe that the melancholic verses of “Ketchum, ID,” came together in just a half hour before recording. Not because I want to refute that creative ingenuity, but the authenticity of the cathartic release becomes all the more painful when it’s verified by context. The picture of Baker, Bridgers, and Dacus around the same microphone creating delicate harmonies as they sing, “When I’m home I’m never there/ Long enough to know,” would feel corny and hyper-romanticized if it were not the reality of the song.

The EP pivots on Baker’s tracks—“Souvenir” being a demo left off her 2017 album,Turn Out the Lights, (but, becoming the “best of all possible iterations” on boygenius, according to the singer), and “Stay Down,” a self-aware reminder to remain grounded. Baker introduced the latter to me with a metaphor on fighting, saying, “You’re supposed to lean in towards a punch, because it’ll take the momentum away from your opponent.” But when you anticipate a punch that isn’t coming, the lean becomes unwarranted defense. In “Stay Down,” she’s learning and reminding herself to stay “grounded, trying to have some perspective,” she explained. “To not view things through my limited myopic assessment of the situation, and be more gracious.”

As they embark on tour together at the end of this week, it seems imminent that they will continue to create and grow together as Boygenius. “I have this weird fear, that it's all a fluke and I'll never write something good again, which I'm trying really hard to get rid of,” Bridgers says, of her own work and of the magic created with Baker and Dacus. “But, if I'm being honest with myself and trying to disregard those feelings, I think it's inevitable that we'll create something great on tour.” With no plan in place, and all the time in the world together, they can continue to capitalize on the uninhibited creativity they allow of each other, and hopefully, keep the supergroup together long after their tour together has come to a close.

NEXT UP
Entertainment
On “$20,” Boygenius Masters The Dynamic Of The Supergroup
Entertainment
Gracie Abrams & Gia Coppola On The Joy Of Free-Flowing Collaboration
Entertainment
Samia On 'Honey' & Saying The Ugly Part Out Loud
Entertainment
Bad Bunny, Lizzo, Kim Petras Will Perform At The 2023 Grammys
Style + Culture, delivered straight to your inbox.