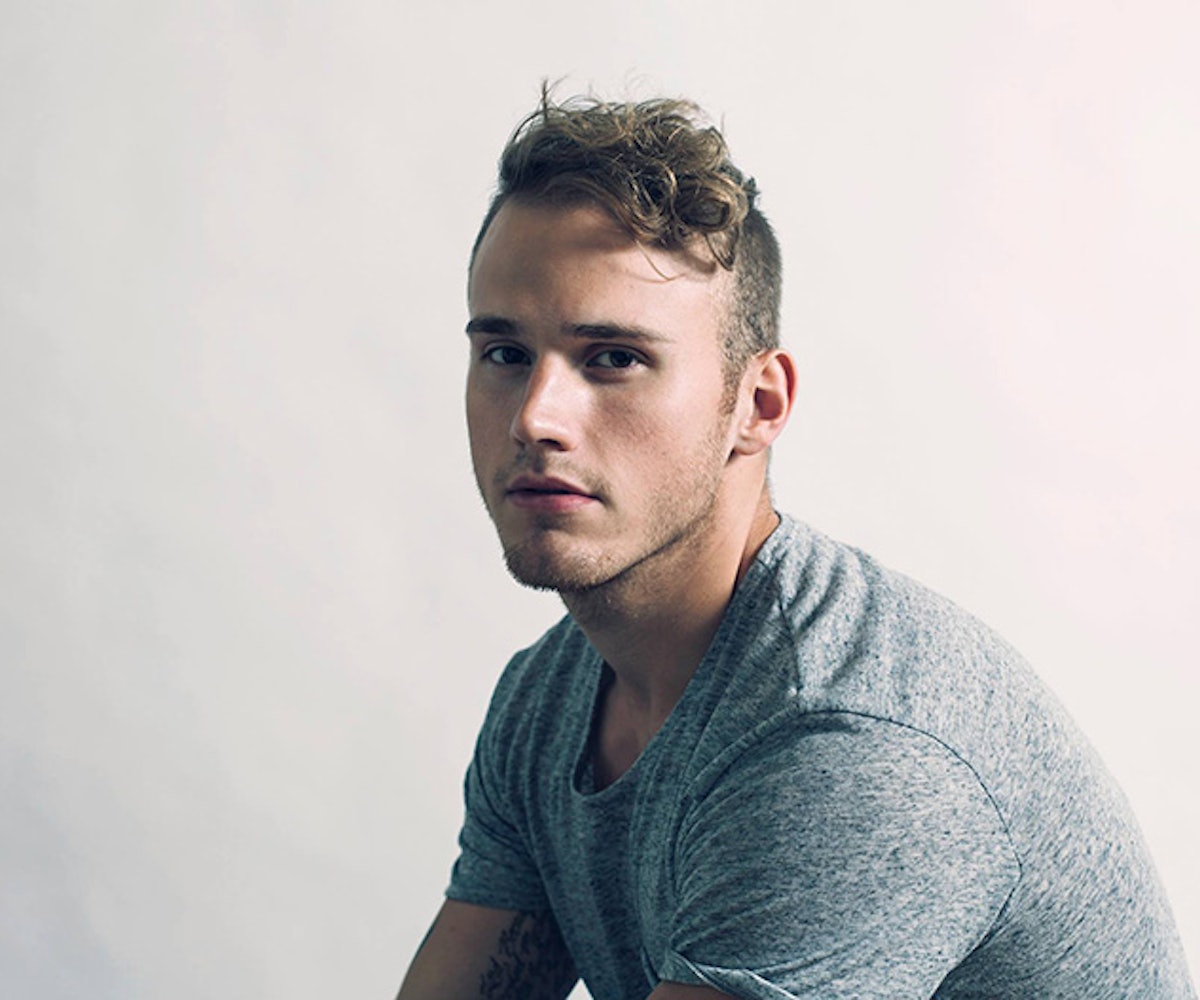 Everything is looking up for Brandon Skeie. The day we spoke with him, he had just found out that one of his favorite remixers will be putting their spin on his runaway single “So Bad.” He had also just recently finished shooting his acoustic video for the same song. (Check it below.) His YouTube videos have garnered nearly 10 million views and his other social channels are blowing up. Not too bad for a 23-year-old.

Thanks to a few covers, Skeie's career in music is just kicking into high gear. His first official single, "So Bad," shows off his robust voice and vocal skill. It's a poppy ballad made for belting in your car, with the windows down. His honesty is provocative. His self-awareness is humbling. We speak with a lot of artists, but few walk their walk as confidently and proud as Skeie does. Expect great things. For now, let's band crush a little below.

What came first: the YouTube channel, or the music?

The YouTube channel. When I was in high school, I auditioned for High School Musical, the play, and ever since then, I just decided that I liked the aspect of music but I didn’t really know how to go about it. So I was introduced to YouTube by a friend and purchased a little flip camera— remember when those flip cameras were all the rage? I set up one of those and started putting covers on YouTube. I quit for a while because I couldn’t handle all the hate. Finally, when high school started up again, and I moved myself to Los Angeles, I kept going with YouTube and found myself in a little YouTube community. I started growing quite a large following when I did a cover of “Problem” by Ariana Grande, with my friend Mahogany Lox. Then it kind of just kept on going and going. I’d always expressed interest in original content, but I wasn’t really sure how to go about it until I started getting mentors, and really learning the ins and outs of writing music and how to express your feelings in the proper way. And so, yeah, YouTube came first, and then out of that came my music.

Do you want to be known as more a musician, or as a YouTuber?

I want to be known 100 percent as an artist. I’ve actually put some of those things on hold so I can focus more on my creative aspirations, writing, and releasing my original content. I’ve got a lot to say, and I feel like I wasn’t able to say it as well doing covers and expressing myself via vlogs as I can when writing my own music and expressing it that way.

Where do you find inspiration to do that?

I find a lot of inspiration from late nights. I tend to not handle my stress in the best way, so when I’m drinking or laid back is when all my song inspiration comes about. I tend to write a lot about either past relationships or how I handle my stress with liquor. Another source of inspiration comes from other R&B-influenced artists, like John Legend and Jazmine Sullivan; people like that who just write about their lives and are straight-up honest about it.

Who were your idols growing up?

Growing up was definitely John Legend. I actually have his lyrics, “we’re just ordinary people,” tattooed on my chest. I have been obsessed with him since forever. He’d be my number one. I’m also heavily influenced by Toni Braxton and Jazmine Sullivan and modern-day artists, like the originality of Lady Gaga and Troye Sivan. Even though he’s brand new, I’m really inspired by him because he’s paving a new road.

He’s doing really, really amazing things, not only for, music in general but the visibility that comes with his presence, for the LGBT community, is huge.

Do you think we expect too much from our recording artists in terms of politics? Like there’s not just music anymore. You have to be an advocate. You have to voice your opinions on all these things. When in the past it was usually just music, that’s it.

It goes hand in hand for me. If I have a name for myself in music, why shouldn't I have a name for myself in something else I care about? So, I myself, would like to be more of an LGBT advocate and shine a light on a generation of people that is new and a generation of people that was suppressed for a while. I would like to use any power or any influence that I have to do good things. So, I think a lot of people mistake that as putting too much pressure on us, but I would do it even if there were no pressure on us.

Did you struggle with the idea of being an openly gay recording artist?

You know, I actually did kind of struggle with that. I went through a whole stage where I was all about coming out. Just being like, “I’m gay,” and all about the LGBT community—almost to a point where I was almost only about the LGBT community. Then I went through a stage where I was like “Maybe people don’t like it all up in their face like that, so maybe I should let people figure out for themselves who I am.” But I’ve kind of gotten to the a place where I’m going to support who I support. I’m going to be who I am, so if I get in a relationship, I’m in a relationship. I’m not going to hide that. I’m going to obviously want to post cute pictures with my boyfriend if I have that. I’m not going to be scared to do anything like that because that's who I am. But I’m not necessarily going to shove it down your throat, either. You know? I’m a huge advocate for the HIV/AIDS foundation and breaking that stigma. I’m not going hide the fact that I would love to perform at gay pride. I’m just gonna be exactly who I am.

“So Bad” is massive and kind of dances across genres. What can we expect on the album? Can we expect more piano stuff, more acoustic stuff? Where are you going with it?

It’s funny that you asked that. “So Bad” is my first major release. What follows “So Bad” is a lot different than what people are going to expect. “So Bad” starts off as a strong ballad, goes into this really big pop chorus, but what follows is actually R&B-influenced. My future stuff is much, much more R&B. It’s a whole different lane, but it still fits.

How did “So Bad” come about? I’m sure there’s some relationship story to go with it.

“So Bad” is actually based off a previous relationship. It was my first serious relationship. It was about wanting somebody so much and being in this relationship, but after about maybe six, seven months I figured out this isn’t right—this isn’t going to continue on the way I’d hoped it had. We’d gone through a lot of issues. But at the end of it, I still wanted him so bad. No matter what he did, no matter how much we argued, I always went back to the fact that I’m so in love with him, and I just really wanted to be with this person, but knowing that I couldn’t be. It’s about that struggle of knowing you want something or someone so bad, but knowing that it’s not the right time, the right place, or the right circumstance for it to actually happen.

You said that you left YouTube because you couldn’t deal with the hate, and then you returned to it. What do you do, now, to stay grounded?

I think I had a realization that YouTube is a place, especially in music, where you’re just going to be up for so much judgement. You’re already being judged so much on the daily that, to me, it kind of just stopped mattering. I believe what I can do and I know that I have this. I’m confident in the fact that I know what I’m doing. I’m confident in the fact that I know where I want to go. I know that there are going to be people who want to tear me down. Comments like that don't get to me at all. I don’t even care to respond to them. Sometimes I do, though, just because I want to get a reaction, but that’s for my own personal amusement, I guess.

I’m planning a lot of shows. I’m going to be performing a lot, writing a lot, and developing my craft even more. I want to get really deep into this R&B record I’ve been waiting to explore and expand in for a long time. For some reason, I went straight to the pop world, but I think I just discovered that I need to be who I am, do exactly what I want to do, no matter what people tell me, and that’s going to be straight up R&B.