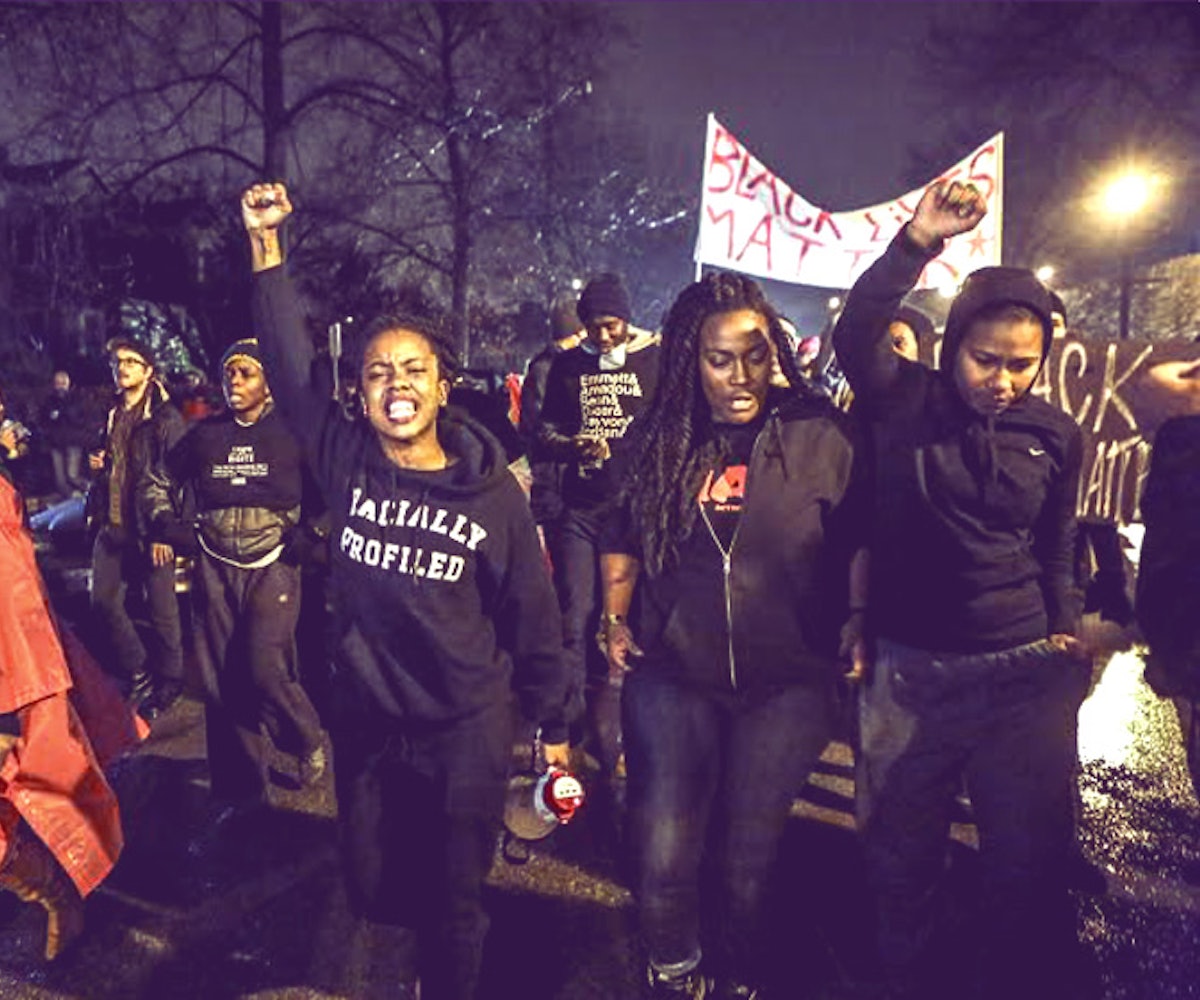 It's been just over a week—eight days, to be precise—since the news broke that the St. Louis County grand jury would not be indicting police officer Darren Wilson for fatally shooting Michael Brown, an unarmed black teenager. But as Brittany Ferrell, co-founder of Millennial Activists United reminds us, 114 days have passed since Mike Brown was killed. For people on the ground in Ferguson, this past week of demonstrations has been a continuation of the work they've been doing since his death.

Due to Brittany's experiences as an organizer on the front lines of America's biggest story, she has the kind of firsthand accounts that aren't covered in the news. She's one of many in Millennial Activists United, a women-lead grassroots collective that came together over common goals: They wanted to rebuild their community, educate other young people about racism, and create a sustainable movement. According to Brittany, it's the job of millennials to "pick up the baton that the Civil Rights movement dropped." She says, "Racism never ended, but the civil rights movement did."

For her, inaction is simply not an option. "If we don't do it, who will?"

In the past week, Brittany has noticed a tangible heightening of emotions, but the decision to not indict Darren Wilson didn't come as a surprise to her. She says it's the presence of over two thousand National Guardsmen and "police armed with heavy military gear like shields and helmets" that's escalating tensions right now, at this very moment—not the people demonstrating. "We're not a threat to anyone or anything except the corrupt system," she says, "And that's what they're afraid of."

In fact, she says that—despite sensationalist media coverage to the contrary—the demonstrations have been overall peaceful. She takes issue with the media's overuse of words like "protesters," "rioters," and "looters" to describe what they're doing, saying that those words don't accurately portray the people on the ground: "It makes us sound less than human. Like zombies or monsters without intention." Indeed, there has been some destruction of property, but Brittany deliberately did not describe those events as part of the work she is doing.

It feels like the coverage of the movement has been alternating between that sort of skewed portrayal and nothing at all. Back in August, she remembers, "I would be laying face down in someone's lawn so I wouldn't get tear-gassed and some woman would be on CNN saying that everything was peaceful." News networks focused on law enforcement's responses to the activism, not the activists themselves. "At this point we're fighting for freedom of speech, just to stand here and do this job. Protesting has gotten such a stigma."

Brittany also points out the fact people are talking about Ferguson as though racism is confined to just one little point on a map. It's as if the larger issues at stake are glazed over: "No one wants to talk about how black people keep getting murdered," she says. "They just want to make it about Ferguson, but it's bigger than that."

It's bigger than racism, too. As a woman, she's experienced firsthand how sexism can appear, even within social justice movements. "Women have been leading this since the very beginning," she says."We've been carrying it on our backs." She continues, "With that being the case, that's when sexism rears its ugly head. Women are at the forefront but their voices aren't being heard in the media and in the community." Not one to ignore injustice, Brittany has been calling people out in person, letting them know that women are "due of a spot at the table." She says it's paid off: More women are being represented and listened to. "Racism and patriarchy go hand in hand," she says. "And from those two things come sexism, ageism, homophobia, and more, all under that umbrella. It's so important to make sure that while you're fighting for racial justice you don't ignore the intersections."

"The women of our generation are resisting sexism, just like the youth in Ferguson have been resisting the police brutality that we've been subjected to. We're saying it can be no more," she says, firmly.

To join the movement and help cause real, lasting change, Brittany wants people to help amplify the issues by educating themselves and talking about it. "You can look at the data and see how deeply entrenched racism is in our police system," she says. It's a matter of putting pressure on the system: "We need to hold a mirror up to them and let them know their wrongdoings, and that we will not be silenced, and we will continue to make progress."

Beyond that, Brittany thinks people should go to Ferguson and be part of the movement in person. "The fact that black people have been slain all over this nation but Ferguson has decided to stand up to it is something worth seeing. We were thrown into this, but we worked together and we organized because we understood that it was bigger than us. It was time for a change."