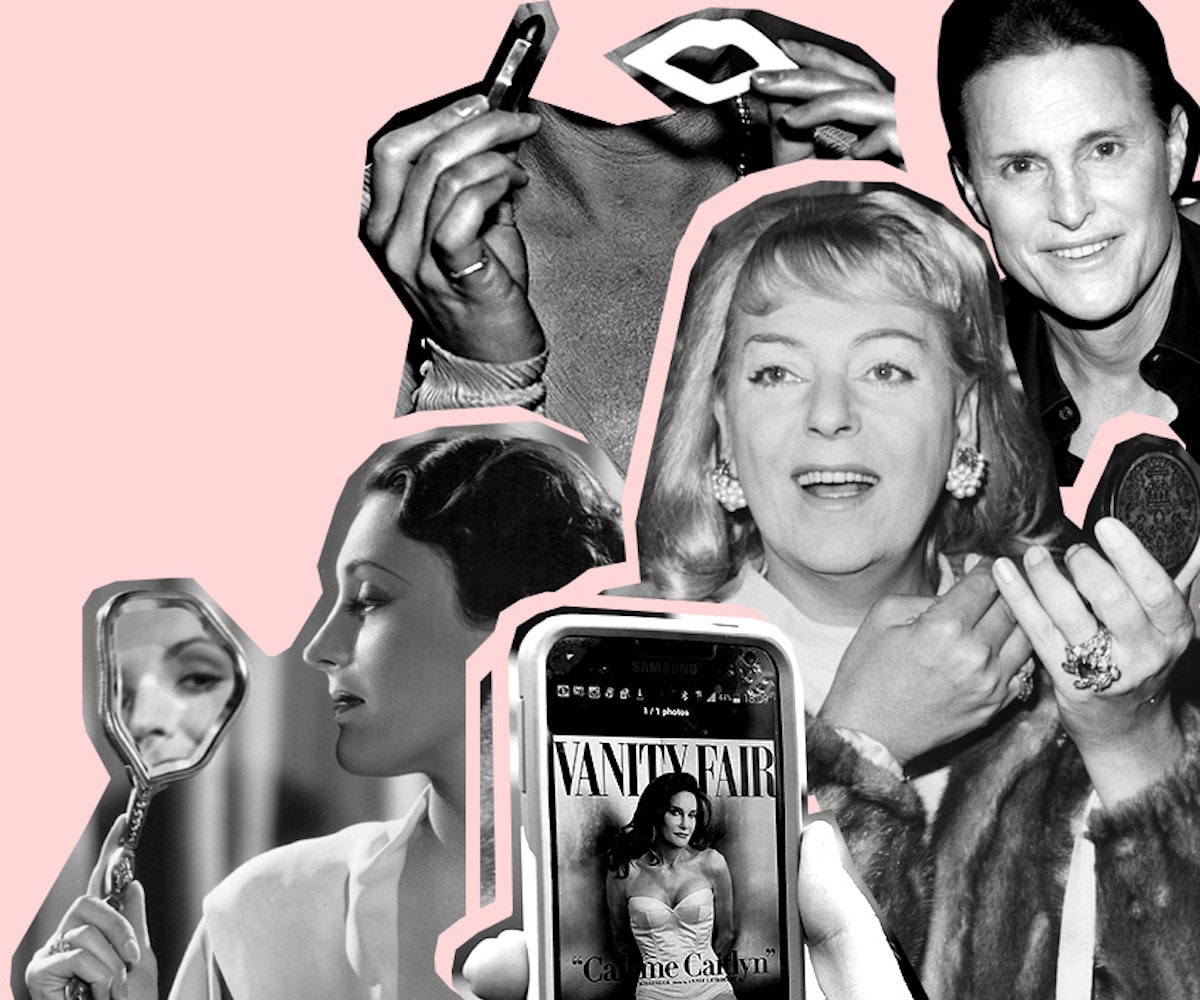 The year was 1952 and Christine Jorgensen, a traditionally beautiful white woman, graced the cover of The Daily News. EX-GI BECOMES BLONDE BEAUTY, the headline read. Her existence was reduced to the very idea that she wanted to become a woman—to occupy space as lesser than. It was both fetishized and ridiculed. Caught somewhere between the media wolves and a dominant culture who believed the very experience of womanhood should be undesirable, Christine Jorgensen carried on. She didn't have a chance to quietly assimilate into her new found womanhood; nor would they let her. Not without an uphill battle.

I'd venture to guess that she just wanted to actualize her own identity while occupying her own body. Perhaps that meant a high-femme aesthetic or perhaps because that is what is prescribed to anyone performing womanhood; cisgender or transgender.

Caitlyn Jenner is the second coming of Christine Jorgensen, 63 years later. But, things aren't the same in today’s world: We now have out-of-the closet, real live trans women to meet and know and love. Increasingly, trans women, with varying degrees of access to media, have no problem calling out a culture of oppression. We are everywhere; out in the open and concealed under our facade of normal—and the idea of “passing” is forcing us into new closets. We fuck up notions of gender entirely, whether or not we pass.

Would any of us know about Caitlyn Jenner if she wasn't a former Olympian, the strongest and most capable in the world? My generation might not even be aware of her if she didn’t adorn the Wheaties box; if the Kardashian/Jenner empire wasn't erected and the ensuing spectacle wasn't on the cover of every print and online publication on a daily basis for years. Maybe we wouldn’t even be nice to Cailtyn and accept her female identity if she wasn’t beautiful, white, and didn’t have the Annie Leibovitz lens through which to view her.

If there wasn’t a product to sell, we might not be aware of her transition at all.

They are whitewashing and commodifying the transition process. They are defining bodies with prescribed medical narratives; defining  gender and identity with medical language and the act of "passing" as the only indication of success. Why would anyone be interested in enabling that culture?

I'm interested in actualizing my own identity without the pushing and pulling. Accessing my body without financial and medical barriers. Accessing surgical intervention however I damn well please in order to get closer to my identity. Accessing a safe world where anyone and everyone who wants to explore themselves, without fear of violence or systemic oppression, can do so.

I'm interested in looking at social media without the contrast of cis people congratulating a member of the Kardashian empire while trans folks are begging the hand that feeds to listen long enough to believe we are real life human beings, when all we want to do is bite back.

I'm done with obituaries and rampant suicides, identity-based murders, trans-panic, and the reduction of our bodies to sex objects by needing to know about the surgery. I'm done with trans women of color being killed and then disappearing from our scope. I'm done with access to care being a luxury for passable white women.

There is currently an unprecedented number of transgender women in the media. We get the privilege of witnessing brilliant and beautiful humans overcoming intersectional oppression and taking their lives for themselves. There are real life transsexual women actively undoing the threads of patriarchy and dismantling trans-misogyny piece by piece. I don't want to be pacified; given opportunities to keep us quiet. I want to be a threat to oppression in all its iterations. I want to be seen, not through a looking glass, but actually seen.

That aside, Caitlyn Jenner represents something exciting to me. She will help older generations put a household name to an identity that was deeply embedded in the closet when they were my age. She represents a level of real that the medical industrial complex will be forced to pay attention to. She represents not giving a fuck in the face of adversity and media scrutiny. For that, I will be attentive as her story unfolds. But, I will be attentive with a critical lens. I will use her success story as a language for the uninitiated to understand. I will have conversations with people who didn't know I existed before, or didn't recognize my female identity if they did. I will be able to point to the magazine cover when I get accidentally gendered male and say "see, that's kind of like what I am—stop assigning a gender to me, and let me define it myself.”

Let Caitlyn Jenner be the start of your path to understanding, and then dig deeper than the Kardashian/Jenner Empire. This is an opportunity for education, not a bar to be set for the rest of us.

NEXT UP
Fashion
See All the Celebs On and Off the Runway at Vogue World
Life
Paul Mescal Is A Single Dad In Emotional Aftersun Trailer
Entertainment
Who Will Rihanna Bring To The Super Bowl?
Life
October 2022's Must-Read Book Releases