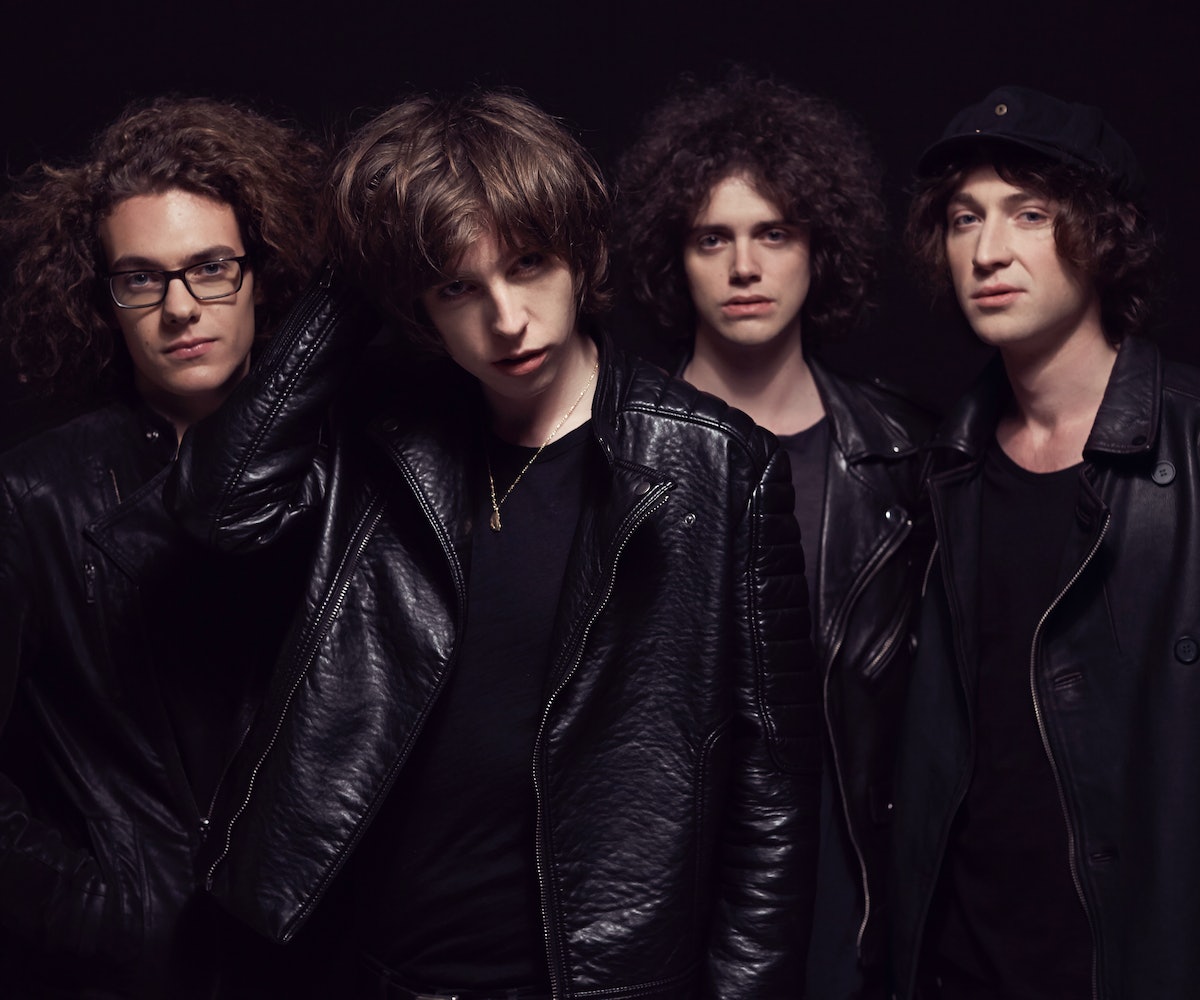 After spending years growing an organic fan base and gigging throughout the U.K., Catfish and the Bottlemen is gearing up to be the next big thing. In fact, with their debut album The Balcony, only having been released in America this past January, the British band has practically been moving nonstop—and they don't have any plans to slow down. Comprised of Van McCann (lead vocals, guitar), Johnny "Bondy" Bond (guitar), Benji Blakeway (bass), and Bob Hall (drums), Catfish and the Bottlemen have created an energy around them that keeps fans singing along to hit songs like "Kathleen," and showing up to the group's many, many shows. Their classic rock 'n' roll vibes paired with an enthusiasm and relatability that's undeniably fresh make it clear they're here to stay. We sat down with Bondy, Benji, and Bob at the Captiol Records office in New York to talk about touring, being a classic band in an electronic age, and their random encounter with Bill Murray.

You’ve been super-busy the past year traveling non-stop—what’s that been like for you?

Bondy: Exciting and exhausting. It feels like we’re wrapping up now, but we’ve still got a whole U.K. tour ahead, which is odd to think that there’s a whole other tour, but it feels like we’re winding down. It’s been so manic. I love traveling around in general.

Benji: When you stop, that’s the unnatural thing. When you’re at home, it’s weird. We’ve got some time off at the end of this U.K. tour, and that’s two months off. But then, hopefully the second album campaign will start—so we’ll be away for another two years.

Do you have a favorite American city that you’ve toured in?

Benji: I do really like it here in New York.

Bondy: I really like Nashville. And although we didn’t play there, we had a day off in Memphis on this tour, and I really liked it there as well. We went to Graceland.

I saw on one of your past tour blogs that you met Bill Murray here—what was that like?

Bondy: Yeah, that was around January. We played David Letterman and he wasn’t a guest on the show or anything—he literally just showed up. He just walked in. The place is meant to be really high security, but Bill Murray just kind of sauntered in. He just kind of stood looking around.

Benji: I think we just saw him in the background. Like—[whispering] "Bill Murray."

Bondy: David Letterman came over, because you know he shakes your hand at the end—he came over to shake my hand and I remember I saw Bill Murray. It must have been really disrespectful because the whole room’s about David Letterman, but as soon as I shake his hand, I’m like, "Bill!” I kind of called him over and was like, "Hi Bill, I’m Bondy." "I’m Bill Murray." I was like, "Yes, you are."

Do you have any other bizarre stories?

Bondy: When we were in the studio, our guitar tech Larry was genuinely convinced that he was being tormented by Jim Morrison’s ghost. He really, really thought it. The studio we were in is supposedly haunted, and I don’t know if there was any particular mention of Jim Morrison. I don’t know if The Doors recorded there. But we’d been down in the Capitol building when we were recording, and we were speaking to Ryan Adams there and he was telling us how his studio is supposedly haunted, and he was hearing voices through a reverb plate in his studio one night, and then that only added to Larry being genuinely convinced.

Are there any bands that you haven’t toured with that you’d like to?

Bondy: Of current bands, I’d love to go on tour with Tame Impala.

Benji: I think Father John Misty would be fun to tour with.

Your debut album was just released in January in America. What’s been a surreal moment you’ve had since then?

Benji: Performing in Leeds in the U.K.—that was about 25,000 people in a tent in Leeds. It was just chaos for 50 minutes. That was a moment where we were just like, "What the fuck? This is crazy." Everyone was losing their minds. Flares were going off. People dressed as Marge Simpson in the crowd. It was madness.

Bondy: And then the album went gold in March—we got presented with the disks by the record label just before we played in London. That was definitely a moment.

How is it different playing in the U.K. versus America?

Bondy: We’ve always thought there was a more positive vibe about people’s willingness for us to have success over here because we’re not from here. Audience-wise, it’s definitely younger over here and it’s more positive and happy. That’s not saying anything against the U.K., because audiences there are amazing. But it’s more of a mixed bag in the U.K. You get older blokes at the back who were into Oasis and things in the '90s and are looking for a band that sounds big like Oasis. And then there’s usually the kinds down in the front, but then there’s just young lads who go insane. There’s a trend of setting flares off at the gigs in the U.K. People sneak them into the gigs and just set them off. It’s good until they have to stop the gigs.

Who have you been listening to lately?

Benji: It’s Father John again, isn’t it? He’s been on a lot.

Bondy: Usually we’ve got one guy or one band that we listen to a lot on the tour but this tour’s got everything.

Benji: We’ve been watching a lot of Rolling Stones documentaries, so they’ve been on a lot. We’ve just been filling time with YouTube documentaries.

The band was formed when you were all still teenagers—what’s it been like growing up together as a group?

Benji: Me and Van, we started the band in 2007. We met Bob a few years later and Bondy joined last year. When we got Bob in, it felt like the band became a new band, like we started over, and the same again when Bondy joined. They’re both so good at what they do, so me and Van were like, "Shit, we gotta up our game and get on their level." This second album that we’ve been doing is the first new stuff we’ve been doing with Bondy, as well. That came together pretty easy, considering we’ve never written together.

Benji: I never get bored playing the same songs despite the fact that they’re six, seven years old already.

Were there any specific bands that made you want to get into music in the first place?

Benji: I wouldn’t say there was one specific band, but the first album I ever bought was the Arctic Monkeys’ first album that came out nearly 10 years ago. We started the band a year after that, so I’d say that probably had a big effect on that. I didn’t even play an instrument until we started the band.

Bondy: I think the first band that made me want to find other musicians to be in a band with was band called The La’s. I actually met a guy who I started playing in my first band with because he said he liked The La’s as well.

More in general, who are your music idols?

Bondy: I really like Grand Parsons and the Flying Burrito Brothers. I like country music. The likes of Serge Gainsbourg and Jacques Dutrunc. Anything from that sort of like, '60s French music. Loads of garage music. All sorts.

Benji: My music taste’s too vague for that question.

Bob: I’m just pretty diabolical. I’m more of a drummer’s drummer. I know people that unless you were a drummer, you wouldn’t know. It’s not even band drummers—but for that I’d go with Ronnie Vannucci, the drummer for The Killers. If I say any other names, they’re like German muso-geeks.

Bondy: We all like The Killers, though. And Van as well. That’s one band that we cover in soundcheck. Van did a cover of them on Triple J. I’ve seen them about three or four times. I like how The Killers are so unashamed about what they do. It’s like a stadium-sounding band, and they’re not shy about saying they’re a big, epic stadium band. There aren’t really many people who do that now.

Do you see yourselves as a stadium band?

Bondy: It’s always been where everyone would like to end up. It’s sort of the outlook. It’s what Van says—why wouldn’t you want to be as big as you can be? Not saying that’s the only thing we want to achieve, but of course it’s a nice thing to happen.

And in the days of laptop-produced electronic music, it’s refreshing to have a more traditional guitar band—but some seem to consider your guitar-bass-drums setup old fashioned. What’s your take on that?

Bondy: Something I’ve heard Van say is that we’re not trying to reinvent the wheel—we’re trying to show you how good it is. If it’s a classic band format, it works.

Benji: Watching those Rolling Stones documentaries, they’ve all gone about things the same way we did in the U.K.—driving in little vans up and down the country, playing in front of 10 people for years. Getting good at it. All these bands seem to have the same kind of story or basis. It might be old fashioned, but it seems to work. And it’s still working now.

Bob: We got here through an old-fashioned way of getting in a van and gigging, so I’ll take that as a compliment.

Bondy: There’s no jump in success. If the foundation’s strong and you build a fanbase by going and playing in Leeds to 50 people and 100 people the next time, they seem like fans that are going to stand by you then. Somebody goes, "Oh, have you heard of this person?" and then they jump in a 300-person capacity for their next gig, and they haven’t learned the trade yet and they haven’t learned how to deal with it. It seems better to be done this way.

How would you describe your style as a band?

Benji: I don’t think it’s ever conscious. We play what we know. Like I said, me and Van didn’t even play instruments when we started, so when we first started writing songs we were just emulating our favorite songs or our favorite bands. There wasn’t ever any effort to make an aesthetic or anything. It just happened this way.