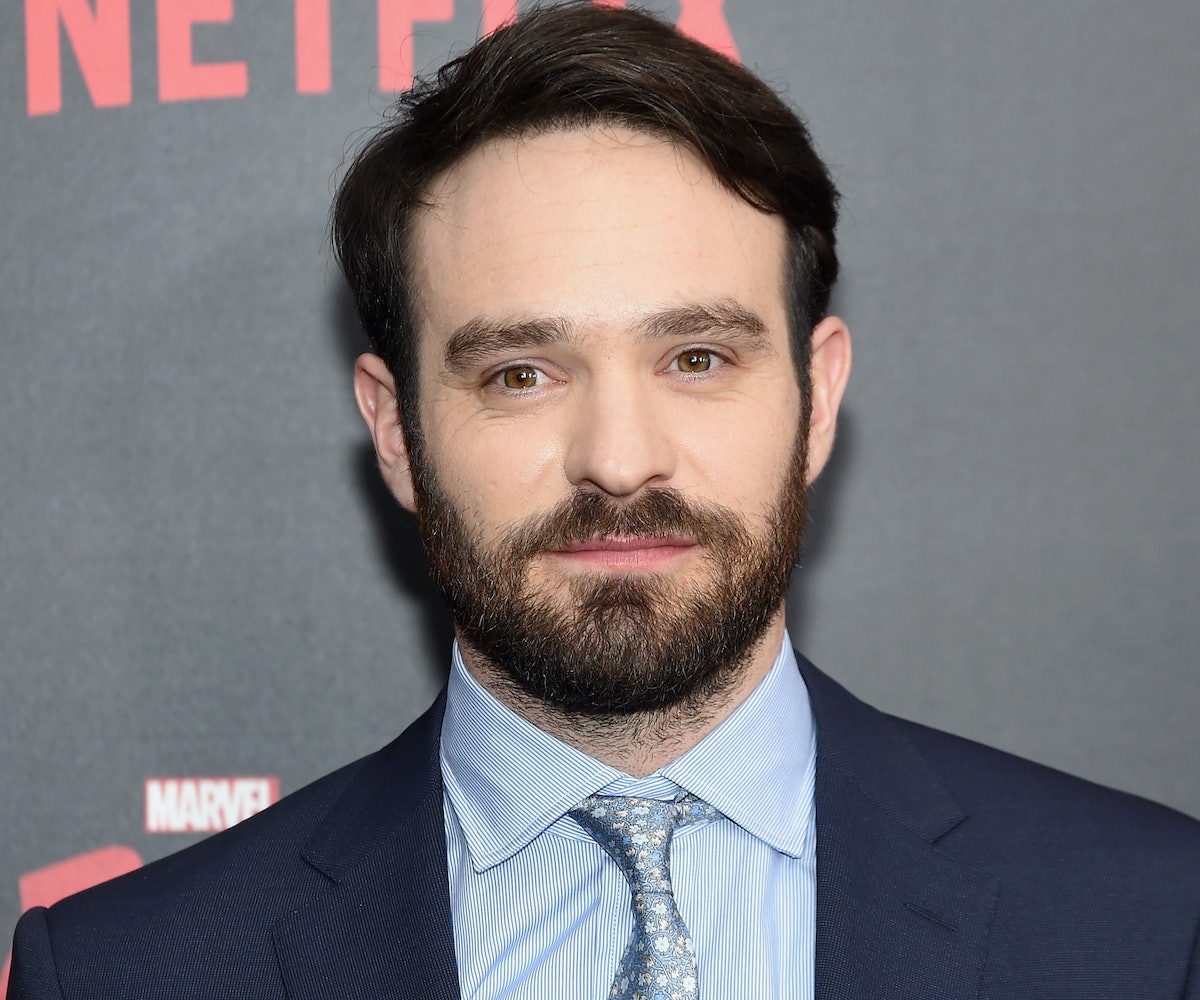 In Daredevil, Charlie Cox has mastered the whole mild-mannered-lawyer-by-day-unstoppable-crimefighter-by-night thing. The soft-spoken British actor wasn't the obvious choice to launch Marvel's partnership with Netflix, but on the eve of the show's season two debut, it's hard to imagine anyone else donning that imposing horned helmet. That season premieres tomorrow, and finds Cox's blind lawyer Matt Murdock trying to keep his law firm afloat during the day, and cleaning up the nasty streets of New York City's Hell's Kitchen by night. The new season will also introduce two other Marvel favorites into Daredevil's world—Jon Bernthal, as the Punisher, and Elodie Yung, as Elektra, both arrive in the neighborhood with motives and methods that will undoubtedly clash with our hero. We spoke to Cox recently about how playing a superhero has changed his life, what it's like to act without eyes, and why he stays off social media.

Do you get recognized more with or without sunglasses?

I very rarely wear sunglasses. I often wish I did have them on me, but I never seem to remember to bring them. But that’s a really good question. Most actors who are really famous wear sunglasses to prevent people from recognizing them, and I guess it’s the opposite effect with me.

Is it a challenge to not be able to use your eyes as a form of expression playing a blind character? It must be a tool that most actors really rely on.

It’s actually really challenging for a number of reasons. The number one being that when you communicate with people, whether you’re acting or in real life, you use your eyes the whole time. You use them in ways that you don’t even realize. You look into people’s eyes to decipher whether they’re telling the truth or whether they’re lying. You also deliver the truth through your own eyes and hide a lie based on what you do with your eyes. You connect emotionally using your sight. When you don’t have those things, it’s very challenging to get used to. And I think it’s challenging not just for me but also for the people that I work with.

What’s it like wearing the Daredevil suit so much this season? Is it as uncomfortable as we hear that superhero costumes are?

This one actually isn’t. Maybe because we’re shooting multiple seasons and it takes a long time to shoot, so there’s a lot more time in the costume, they were more willing and able to make adjustments. We were figuring it out at the end of the first season and there were still some tiny problems that it had. This season we really got to experiment with some things, and as you get further into the series, you see that it gets an upgrade. And it’s great, man, I find it very comfortable. It allows me to do all the stuff I want to do. And also it feels pretty badass, I’m not going to lie.

It’s not so much two different characters—I don’t think that he becomes a different person. But in the same way, that human beings assume a kind of persona when they dress a certain way or engage in a certain thing or they’re in a certain company of people, you change how you talk and how you move, and your confidence changes. I think that’s what happens with Matt. He tends to try to maintain a cool, calm exterior and gives a sense of having everything under control as Matt Murdock. But when he puts on the suit, he’s recognizable; he’s famous as Daredevil. Then he assumes this kind of threatening but force-for-good character. There’s an arrogance and a swagger to it, as well, that I think he enjoys.

In the season premiere, you and Jon Bernthal engage in an epic fight. How much of that is you and how much of it is your stunt double?

It’s very hard to know because Chris Brewster, my stunt double, is so good that he learned to move like me. Both him and I struggle to know who’s who. I do as much of it as I can, which basically means I do all the punching and the kicking and the running and all of that, and then Chris does it, as well, because he does it better than me and he looks more professional than when I do it, obviously. The only stuff I don’t do is whenever there’s a big 360 kick or a huge double backflip or something—that’s always Chris.

What can you tell us about the Punisher’s character? Is he more of a hero or a villain this season?

The only thing I can say is that I don’t think it’s too black and white this season. Last season it was more black and white: There was a very clear villain right from the start. This season it’s more raising the question of what is a villain, what is a hero, and what is a heroic act? What side of the fence do we lie on when it comes to deciding what is vigilante justice, and is it necessary? Is it lawful? In our show, I like to think of him as more of an antihero than a villain, and one of the things I’m really excited about is that relationship because it’s complex and it’s confusing.

What excited you the most about these new scripts when you first read them?

I just was really impressed. Second seasons are always difficult because there’s a lot of things you don’t get to do, as you do get to do in the first season. You don’t get to set the tone, meet the characters, discover the relationships. So really, in season two, you have to be very plot-heavy from the start. Season one was a very slow burn. Wilson Fisk and Matt Murdock didn’t even meet until the ninth episode. I think there probably would’ve been a temptation to recreate the first season in a different way with a different story. What I was impressed with what the writers did was they just decided no, we’re not going to do that, we’re going to do something very different, and we’re going to hope that the audience is on board with our ambitions.

Do you feel like you’re part of the Marvel Cinematic Universe, or does what you’re doing on television feel separate?

If you’re talking about what we film, I do see a world, where this character in this world exists, in the same universe as the Avenger movies and Thor and Iron Man and all of those. They are different, but I don’t think so different that they couldn’t be part of the same world. Those guys are saving the universe, we’re saving the city.

We’re saving a neighborhood, yeah. We don’t have the kind of power that those characters [have]. But from a company point of view, it doesn’t feel like we’re part of or separate. It just feels like this is another tributary of it, another evolution of that whole thing. This is a new kind of growth. It feels very exciting. It feels like, when the show came out last year, they really hit something. There are tons and tons of massive Marvel fans who are in their thirties and forties who have loved Daredevil since, I don’t know, the ‘80s or whenever they discovered him. We did the show for them.

How has your life changed on a day-to-day level since you got cast?

I get recognized more, a lot more. But I live in New York, and New Yorkers are very friendly and kind and cool. New Yorkers don’t give a shit. They’re just like, “Hey, what’s up man?” And then they move on. I never feel like I’m hounded or anything like that.

What is your take on Netflix’s binge-watching model, the idea that their shows are crafted to watch in one sitting?

Personally, I’m for it. It gives the consumer the responsibility and the decision to watch when they like and how they like. In the past, when a show is released episodically, I would often wait until it would come out on DVD so that I could buy a box set and watch them all at the same time. I enjoy consuming television that way, and what Netflix has done is they’ve looked at that and obviously seen that that’s a pattern in human nature at the moment. And it’s clever because sometimes in the film world, we’ve done things in a certain way for so long that no one really questions it anymore. They never say “Why do we do that?” It’s the way we do it because that’s how it’s always done. What Netflix is trying to do is they’re trying to look at the current format and say “Does this work, and how does it benefit us?”

Why aren’t you on any social media?

it’s not my thing. That in no way hopefully says anything about people who enjoy social media. I know there are wonderful benefits of social media and I know lots of friends who are on social media. It’s not really in my nature at this time. And maybe that will change—maybe one day I’ll decide that I would like to engage in it. I kind of like that when I get home at night, or when I'm on holiday with my family and I’m not working and I’m at home and doing my own thing, I like that I’m not connecting to any of that stuff. I’m not reading comments or hearing what people think. I’m completely unplugged from it all, and not subjected to the whole thing. I do appreciate that some people might find that difficult because I know fans have requested that I go on social media, and I do appreciate that. I try to go and do social media days with Netflix and Marvel, so I’ll go in for an hour at Marvel and reply to tweets and all that stuff. As of right now, I’m kind of a private person, and I feel like I maintain a level of privacy that I would lose if I started to engage in that.