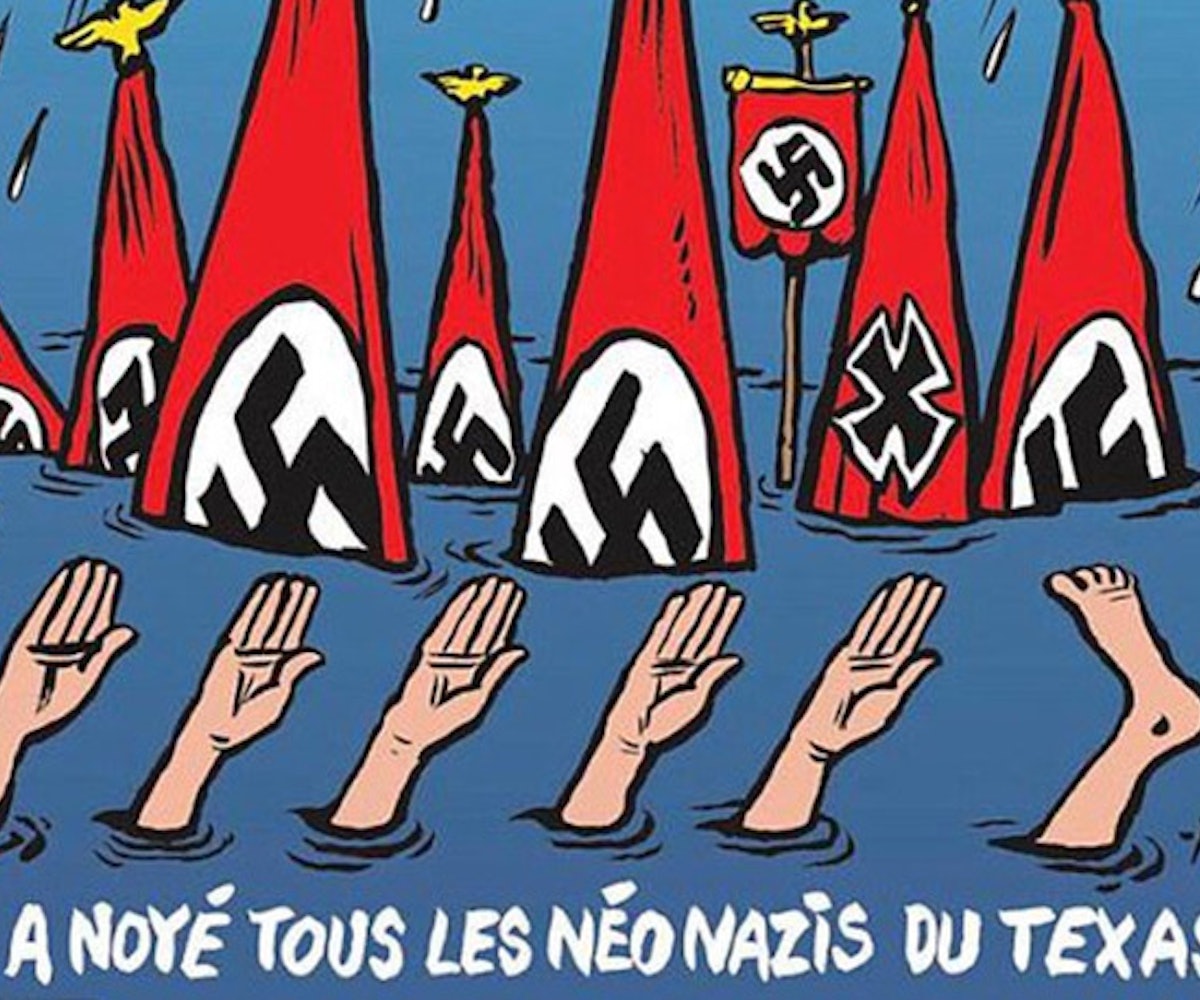 After Hurricane Harvey touched down in Texas, some people were tweeting that it was punishment for all of the Republicans in the state who voted for Donald Trump. This is, of course, just as offensive as Ann Coulter suggesting Houston was hit hardest because they have a lesbian mayor. Now, the French satirical magazine Charlie Hebdo has taken this idea a step further and suggested that the hurricane was a good thing because it drowned "all the neo-Nazis of Texas."

On their latest cover, Charlie Hebdo features Nazis saluting as they're submerged in water. "God Exists!" the cover reads. "He Drowned All the Neo-Nazis of Texas.”

People are, rightfully, upset by this imagery. Among many things wrong with it, it's clear the magazine didn't do much research. As CNN points out, Houston has a large Jewish population, and in the 2016 election, Harris County voted for Hillary Clinton. There are also more than 1.7 million Mexicans living in the Southern city.

Before the cover was released, when some people were rejoicing that the natural disaster hit a red state, people were quick to come to Houston's defense. New Yorker's Jia Tolentino wrote a particularly poignant thread about her hometown.

"Houston is a sprawling, underestimated, bewilderingly huge city with a lot of really vulnerable populations & a scrappy, wonderful heart," she wrote. "It's been a major refugee center since the '70s." During that time, more than 200,000 Vietnamese resettled in Houston following the Vietnam War. There was also an influx of Latinos after an oil collapse in 1982, according to the LA Times.

As of 2010, 25.6 percent of Houston's population was white, and it's currently one of the most diverse cities in the country. For Charlie Hebdo to paint the entire state of Texas, and the cities hit the hardest like Houston, as full of neo-Nazis is not just offensive, but wildly inaccurate.

The magazine always aims to enrage—they've regularly featured the Prophet Muhammad on their covers, who many Muslims believe should never be depicted, with headlines like “Mohammed Overwhelmed by Fundamentalism." In response to these drawings, a gunman attacked the magazine's headquarters in 2015, killing a dozen people.

The internet's reaction to this latest cover has likely been exactly what Charlie Hebdo expected and hoped for. But, it's still worth defending the people of Texas, who have been sometimes mischaracterized during this national crisis.

As a result of Hurricane Harvey, more than 30 people have died so far and thousands have lost their homes. Not only are most of these people not white supremacists, but many of them have shown such bravery and compassion that it restored our faith in humanity.

Here are some ways you can help the victims of Hurricane Harvey.