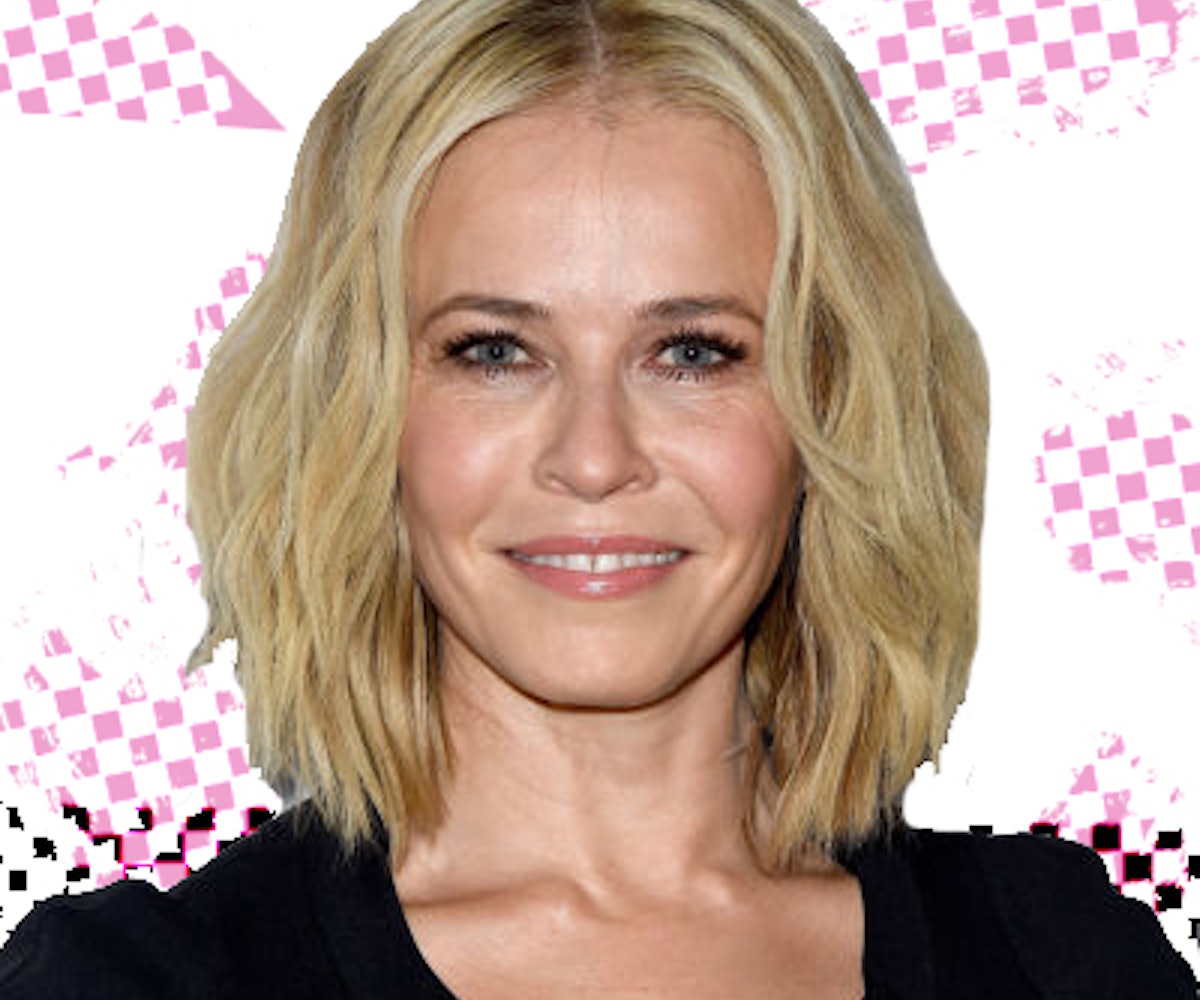 In 2014, Chelsea Handler ended her run on the E! network as the acerbic host of the celebrity-driven talk show Chelsea Lately. After seven years of dishing on the shallow exploits of Hollywood’s rich and scandalous, the comedian and author decided it was time to dig deeper. She took a soul-searching year abroad—from China to French Polynesia—and returned with a fresh perspective and new sense of purpose. As part of her $10 million deal with Netflix, Chelsea Does premiered in January—a four-part docuseries that found the host exploring important issues like drugs and marriage. The series served as the blueprint for Handler’s brand new, three-nights-a-week topical talk show, Chelsea, which debuts on Netflix tonight, and will appear every Wednesday, Thursday, and Friday. Here, Handler discusses her new show and that funny thing called fame.

Why does the current talk show format bore you?

It’s just stale. And I have no interest in being a follower. I don’t want to start out with a monologue and have a guest and a band. It’s not interesting to me, and I have to keep myself interested if I want people to be interested.

What has been the greatest challenge for you in developing your new talk show?

It’s just kind of figuring out exactly what we’re doing. The documentaries were a great bridge into the direction we’re moving in—a show about getting information and talking about more serious things but with a sense of humor. What we did in the documentaries is exactly what I want to do for the talk show, but obviously it’s a different format that’s going to be on three nights a week. I kind of want to incorporate that as much as possible and make it a cool way to get information and a place where you would want to get it from.

What makes a good interviewer?

I think a good interviewer is somebody who is actually curious and really interested in people, and I have a very low bullshit meter. I have no problem with conflict and getting into it with somebody, or asking questions that are uncomfortable. I thrive on that. That’s my natural disposition. That’s just the way I am and I roll with it. Interviewing people is the easiest job in the world if you’re smart.

Who is your dream guest?

I don’t know, I don’t have dream guests. I’ve been asked that question so many times. It’s so annoying—I don’t have an answer.

When the cameras are on, are we getting a different Chelsea?

No and that’s why the response has been so great, because it’s not one-dimensional. On my old show, it was just one-dimensional. I was driving the ship, you know what I mean? I was in charge. I was telling people when to talk, when to shut up. In this, the reason why the response was so huge was because I think people saw a full person. Nobody’s one thing. I watched the documentary and there were moments where I would feel bad for myself, and I was like, “Oh, I feel bad for her!” And then I thought, “Wait, that’s you”.

Is it a blessing that you didn’t become famous until your early 30s? Would you have been able to handle wealth and fame if you achieved it when you were younger?

I think it was probably best that I didn’t. I’m living this life now that I’ve wanted to live my entire life. Since I was a kid, all I wanted to do was grow up. All I wanted to do was have my own place in California and be successful and just be an adult and have people come to my house and have parties. I had this romantic notion of what it was like to be an adult, and I’m living that out in every way shape or form. My executive producer called me last night and was like, “Hey, I’m in your neighborhood. Can I stop by for a drink?” I just got home from having dinner with my girlfriend, and he came over and we smoked a joint and played ping pong for two hours and I thought, “This is exactly what I always wanted my life to be like”.

What does it feel like to live the exact life you’ve always wanted?

It feels pretty good. It feels great to be able to succeed at something that you’ve worked at your whole life, to enjoy all the moments, to take a break for a minute, to step away for a year like I was able to do, which is huge. I learned a lot and grew up a lot. You have to be smart enough to know how to have a healthy relationship with this business, and have a healthy relationship with myself, and all the success and pain and all that fucking bullshit that comes along with it. I don’t want a family. I don’t want kids. I don’t want any of that. Being successful means probably more to me than it does to other people. I want to be really, really good at what I do. I want to make sure that I’m constantly challenging myself. So walking away from E!, taking a year off and doing documentaries—which I had no business in even approaching that kind of medium—was huge for me.

For someone who is famous for letting their guard down, you’re friends with a lot of famously guarded people. What is that like?

Do you ever give your famous friends like Gwyneth Paltrow and Cameron Diaz shit for not cutting through that bullshit and not being open and honest for their lives?

Well, Gwyneth is very open and honest. That’s not somebody who’s guarded. She’s not guarded at all—she’s great. No, I give everybody shit. I don’t pretend about anything. Nothing’s off the table. If I’m mad at you, you’re going to know I’m mad at you. If you’re my friend, then you’re going to know that I’m your friend. I’m not scared to tell you if you’ve disappointed me and I’m not scared to tell the truth and I don’t care about fighting. I have no problem fighting with people. Some people hate conflict and I don’t.

Are you on any dating apps?

Yeah, I’m on that one, Raya. I’ve never met up with anyone that I met, but it’s fun to do. I mean I would, though, but I don’t care about apps. I like dating.

Have you met famous men on there?

No, I don’t hit on the famous people. I don’t want a famous boyfriend.

And why haven’t you met up with anyone?

I don’t know, I just haven’t gotten around to it. I have a lot of action happening--I’m just all over the place right now. We just got back from Russia, which is miserable. It really was, it was so miserable.

Was that for the talk show?

Yeah, that was for the show. Sorry give me one second, I just need to talk to this guy. Sorry this is the most fucked up phone call ever, huh? My life is just a disaster at all times, I’m the most disorganized person you’ve ever met.

With the rise of social media, everyone’s a critic, and everyone is very quick to voice their opinion, often a negative one. A recent example was the reaction to Coldplay’s Super Bowl halftime performance, which was overwhelming negative. What do you think of this phenomenon?

It’s annoying! I mean, why? What’s wrong with Coldplay? They did a fucking great job! What’s the problem? I read a review in The New York Times about Coldplay and they ripped them. What is that about? I don’t understand. It’s just like, pick on white people because we have so much shit coming our way. You can’t make fun of Beyoncé, you can’t make fun of Bruno Mars, because everybody is in such a politically-correct zone, so they can rip Chris Martin to shreds. Chris Martin is fucking amazing in my opinion.

What do you think about the whole conversation swirling around the gender pay gap? Do you think that somebody like Jennifer Lawrence should be writing about not getting as much money as her male costars or should she be pleased with the millions she’s already making?

She maybe shouldn’t be writing essays in the plural—I think once is fine—but it’s good to speak up and stick up for yourself, and in a way you’re going to help a lot of women. Of course she should be acting for equal pay, but that wasn’t your question. You were just asking whether she should be writing essays.

Do you like being labeled as a “female comedian,” or would you rather be known as Chelsea Handler, comedian, and talk show host?

I’m said are you okay with your gender being mentioned when it comes to your work?

I don’t give a shit about that, I don’t care. I like being called a female. I don’t even mind being called a woman, it’s great, because I feel very masculine.

You left your E! Show in part because you were tired of covering the celebrity beat. In your time off did you feel like you got your brain back?

Totally! I was like a 75-year-old woman on a sabbatical. I went all over the world. I went to South America, China, French Polynesia. I went scuba diving. I bought a house in Spain. I learned Spanish. I did everything that I would ever want to do as an adult wealthy person, as a female wealthy person.

Were you checking Twitter during that period and trying to keep up with celebrity news?

No, I’m not reading US Weekly, and I never will be. I wanted to get away from television and everything. I want to be a real, full person—I don’t want to be defined by one thing. I went to Austria for two weeks by myself for a detox, where you eat like shit and stop eating at 5 PM. I mean, these are the things that I’m never going to do again, so I wanted to do as much and spend as much time as I could alone, because I’m always around people. When you work, there are people around you all the time, and you have somebody who hands you coffee, and somebody that ties your shoelaces, and assistants everywhere. That’s not real. Of course it’s my life, it’s a huge luxury, and it’s how it happens. But I also want to have the full spectrum of experiences in life, where I can go away and sit with myself and not have somebody getting me a cappuccino.

You said in an interview that you thought Taylor’s Swift’s squad craze was stupid. If she had invited you on stage during one of her shows, would you have gone?

What if you drank enough?

There’s not enough alcohol in the world. I’d have to take ecstasy, then maybe.