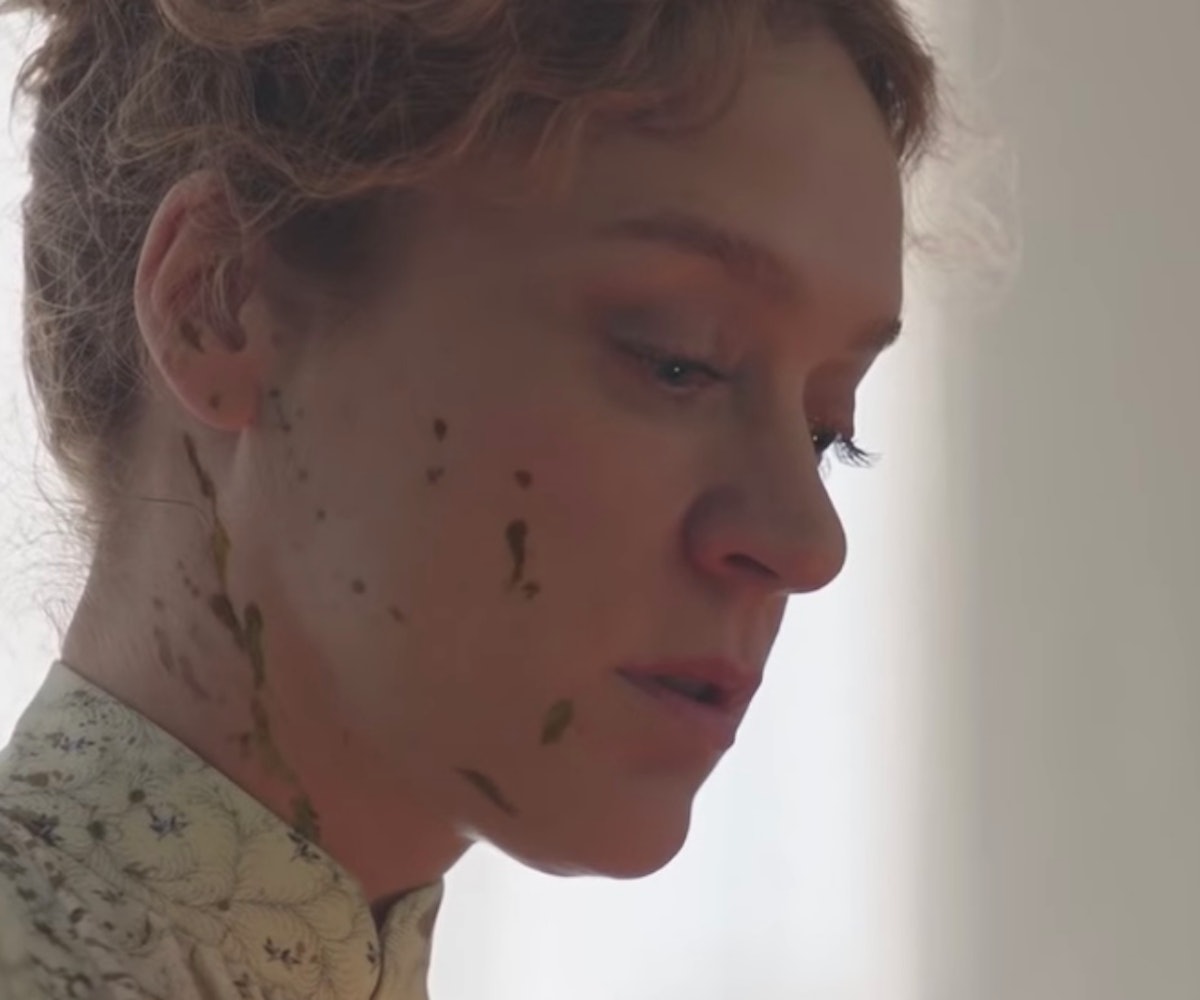 Despite being the ultimate downtown It Girl for the past 20 years, Chloë Sevigny has long considered herself a "Hollywood outsider"—someone who has more in common with an (alleged) axe murderer than your run-of-the-mill actor. Okay, perhaps that's a slight exaggeration, but it is unquestionable that Sevigny's forged a unique bond with none other than Lizzie Borden. After all, for the past decade, Borden biopic Lizzie has been the ultimate labor of love for Sevigny, a vehicle for her to express her own frustrations with the limits imposed upon women by patriarchal repression and control.

A reimagination of Borden's motivations for the brutal axe murders of her father and stepmother, Lizzie introduces Kristen Stewart's Bridget Sullivan into the narrative as the family maid-turned-secret lover. Taking place in the time leading up to the infamous 1892 murders, Borden's story, and eventual acquittal for said crimes, has always been a point of fascination for Sevigny. Fondly referring to Borden as an "icon" and an "American outlaw" during our interview, it's clear that Sevigny admires Borden as an early-era rebel—a kindred spirit of sorts and a symbol of resistance.

So ahead of Lizzie's theatrical release, we caught up with Sevigny to chat about everything from casting Stewart to Borden's lasting legend and everything in between. Read our Q&A with her, below.

What was it like pulling double duty for Lizzie, since you both produced and starred in it?

There were a lot of ups and downs. It’s been many years in the making and has been very emotional. There have been different versions of the movie, and you have to learn to roll with it. But I think [I learned a lot about the] business aspect of things, because that's something I've always kind of shied away from. So this was a real eye-opener. I've been working as an actress for 20-something years, and you know [about the business side to] a certain extent, but it’s just making a movie and hearing all the horror stories. But when you are [doing both for a movie], it’s obviously much more daunting and emotional. We got the movie made in the end though. I think the highlight of my producing duties was convincing Kristen Stewart [to get] on board.

What exactly was it about her that made you know she had to play Bridget?

I just could tell. I've met her a few times at some parties and just the way we communicated… I just always admired her as an actress, of course—her performances are incredible, and she looks incredible. But as a person, I also like what she represents to popular culture, and how she navigates the world and the choices she makes. It’s more about all of that than just her name or that I wanted to hang out with her.

I also hadn't seen her do something so contained. She's kind of like a wild thing and very emotional in her acting, and I thought it would be interesting to watch her do something where she wasn't allowed to behave in that kind of way. Where she had to keep it all in, but there is always so much going on in her mind. If you talk to her for five seconds, she’s just so bright, and she's always just questioning everything. Even without any dialogue, I knew there would be a ton of stuff going on there.

Her character definitely also had to deal with some serious patriarchal repression and sexual abuse but was in a position where she couldn’t really say anything. Did the current cultural climate at all have anything to do with the writing of her character?

Oddly, I feel like things have changed so much in the past year. We started shooting right after the election, and ever since, there's been a whole cultural shift. Which, obviously, we’re all excited about—like, finally. It now feels like the film is more relevant, and if it can contribute to that conversation, that's all I would hope for. [I hope] people would recognize this character as more like American outlaw who fights against the patriarchy, symbolically. We don't condone violence, but I just think that what Lizzie represents is even more meaningful now. Even fighting for Bridget who's the faceless, nameless [Irish] immigrant.

Why do you think the Lizzie Borden story still resonates so deeply in pop culture?

I think true crime is endlessly fascinating for people. And it’s still unsolved, technically. She was never convicted, so I think people like to play detective and think, I'm going to figure it out. Even I did. I know when [writer Bryce Kass] and I started working on the project, we were like, “We're going to figure out who really killed them.” Of course, we didn't. But with every book that comes out, her legend grows and the data [mounts]. And she's become this icon for outcasts. I just think that people are fascinated by her and by the period. [Like living in the] turn of the century and living in the circumstances of that time. As you were saying, they were oppressed and repressed, and when they started fighting back against that... I mean, I believe we are still [fighting against that] as second-class citizens, but I think that's slowly changing.

Obviously, Lizzie’s been mythologized in a way that almost borders on caricature sometimes. Like, there are never really any nuances in terms of the narratives created around her, just that she was a crazed woman who snapped. How did you make sure to avoid that with this production?

I think we wanted to really focus on her home life. Like, what it must have been like for her prior to the murders. [Bryce and I] both fell in love with Lizzie, and we are really empathetic toward her, so we wanted to show that side of her.

Then there's the turn. Obviously, you are seeing her through Bridget's eyes and also it’s a love story. I think a lot of people who fall in love, you see another side of [your partner, a change], a different aspect. In this case, of course, it’s pretty severe. But then you also find yourself asking, Do I even know who you are? Who are you? I think that's a common theme.

Lizzie and Bridget are in love, and she thinks Bridget is going to be free and happy. That this love is going to change everything for her, and I think that those expectations are dangerous.

On that note, the fact that this is a queer love story that takes place at the turn of the century is pretty incredible. What went into the research of this? How much of it is based on your findings?

There have been some books that have touched upon [Bridget and Lizzie’s relationship]. Lizzie was also famously with this actress, Nance O'Neil. But the film, I think, is about how women find strength in one another. I think we were interested in displaying that as well.

Were there any surprising things you stumbled upon during the making of the project though?

I mean, truth is stranger than fiction. There are a lot of little details which we included in earlier versions of our movie, but it’s easy to get bogged down by them. In the end, we decided to not include as many as those. So I think some of the Lizzie fanatics might be disappointed that there are details left out, but I hope they go along for the ride and enjoy the nuances we bring to the story.

Lizzie is in theaters September 14.