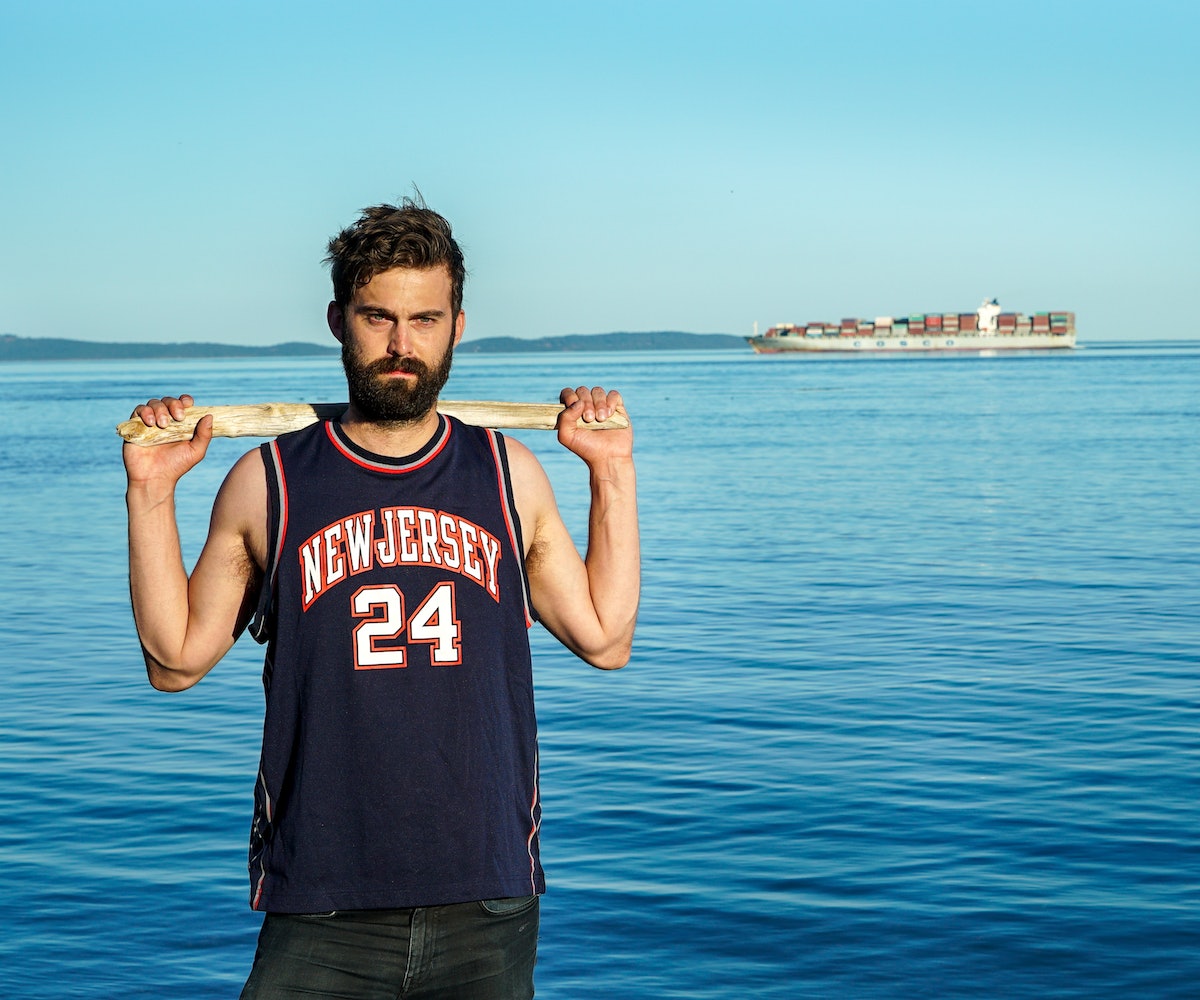 For about five years, the world was stuck in the web of Vampire Weekend. Comprised of four graduates from Columbia University, the indie rock band made a lasting impression on pretty much anyone with a good ear for music.

Last year, half of Vampire Weekend decided to part ways in pursuit of solo endeavors, though. It was a devastating moment for many fans, but it was only a matter of time before this sort of thing happened. And now fans can listen to new sounds courtesy of Chris Tomson, whose solo project is known as Dams of the West. While Tomson was the drummer of Vampire Weekend, he's actually well-versed in almost every rock instrument.

So far, Tomson has released two singles under Dams of the West, with more to come with the release of his debut solo record, Youngish American. The album was recorded in Nashville with Patrick Carney from the Black Keys. The material on Youngish American reflects Tomson's current experience as coming into his own; it's about letting go of the idea of being young and internalizing the process of getting older. Next up? Getting Dams of the West in front of an audience.

"If I can, I want to tour as much as possible and get to places that aren't just New York and L.A.," says Tomson. "I feel like getting to people towns and me making shitty jokes and stuff is part of getting into the project and the idea of it."

Learn more about Tomson's not-so-lonely road to solo stardom in the interview, below.

What were you doing before you decided to pursue a solo project?

I knew that it would be a somewhat lengthy break from Vampire Weekend, so our two last shows were at the British festival called Reading and Leeds, and I convinced [my wife] Emily—who had just left her job—to travel around Europe for a while. We had our marriage ceremony in the middle of that trip. A bunch of traveling, but then after arriving home a few months later, essentially I kicked the can down the road with figuring out exactly what the hell to do with myself. Vacation was fun, but after arriving home, the sense of dread was somewhat enhanced by having been gone for so long. So, the answer is a bit of traveling and then having to stare the void in the face.

What pushed you to start creating music on your own?

I think every member of our band had done things on our own even if it wasn't necessarily in a public facing scenario. So being home for a while and thinking about what it is that I wanted to do, the most economical, and, to put simply, the easiest thing to do was like, "Why don't I sit down and see what happens?" I hadn't written songs in a while in a way that wasn't trying to be a piece for Vampire Weekend or fit in with something else that was already going on, so that was an explosive start. The tools at my disposal were my own limbs and a piano. So, that seemed like the easiest way to see what could happen and what should happen.

How has your songwriting and music-making process changed since the Vampire Weekend?

I mean, it was completely different. When I've done stuff for Vampire Weekend, especially early on, I was sitting at a drum set and coming up with the "boop boop de boops" to fit in with what everybody else was doing. Sitting at a piano and thinking in literal terms and chords and limericks was incredibly different. So, that's why I think it took me so long to get started and get rolling and figure out exactly what my perspective was, what it could be and, you know, going back to a lot of music tastes that I hadn't really thought about or mentally went through.

What brought you down to Nashville?

I was lucky enough to get in touch with Patrick Carney from the Black Keys. I was very happy with the direction the songwriting was going, but my skills as an engineer are—they're none to speak of. So I got in touch with Patrick and he lives in Nashville, so he was like, "Hey I got these few weeks, why don't you just come down?" So we worked a little bit at this place called Hat Town Studios and also in Patrick's garage. It was more because this guy I really respected and liked offered to help me out and work with me, so I went to him.

Can you tell me more about

and the vibe of the record?

I think the title was actually the last song I completed, the title track. The song is plural, the album is singular. But, the title of the album and a lot of the songs I was writing was how I was feeling coming home from that trip. As I said, I had gotten married, and, currently, I'm in year two of a 30-year mortgage. I wasn't feeling particularly young anymore, you know, in any number of ways that it can manifest itself. A lot of the songs are about me figuring out getting older, like, "Is that cool? Is that chill?" Obviously, everyone goes through that in their own way, but I think it was sitting at home at a piano, staring at a brick wall, and being like, "What's your deal dude?"

Why did you end up calling your project Dams of the West?

First of all, my real name, Chris Tomson—Christopher William Tomson—is a fine name. It's served me well, but it's not particularly exciting or capital "R" romantic in any way; if I had a cool name, it would have been an easier choice. Also, some part of me likes the idea of bands, and even though I wrote all the songs myself, I felt like recording with Patrick and Roger and Mark—the engineers—[meant] that it wasn't just me. Almost any music project isn't the product of one person. So, the idea of giving it a project name was appealing to me. Essentially, I cycled through a lot of names before arriving at this one. I read a few articles about how in the western United States, a lot of dams that were built in the '50s and '60s are crumbling or obsolete for the intention they were built for, and, as a white dude playing drums, I felt camaraderie with that.

When did first start learning how to play instruments?

Well, it kinda goes back to kindergarten and playing "Hot Cross Buns" on the recorder, if you must know. I played trombone growing up, then did the somewhat standard switch to guitar in high school because, to me, trombone didn't seem like a particularly attractive thing to do in high school. Some people don't feel that way, but I did. I think it's more just music being a profession, as luck would have it, it was always something that I thought of. So I did very little formal training, and I wouldn't say I can play any instrument—I would say, I could play most of the basic rock band instruments. Actually, drums are the instrument I picked up last. The first two practices of Vampire Weekend, I was actually supposed to be the guitarist. I'd played more guitar in college. We couldn't find a drummer, and I didn't know how to play really, but I always liked playing drums, so I was like, "Okay, I'll give it a shot." It ended up working out. Even though that's what I'm known for, the drums are probably the last instrument I picked up.

I watched the video for "Death Wish," and the one thing I feel like everyone has pointed out is the fact that you're wearing this New Jersey jersey. I'm from Cherry Hill, New Jersey, so I appreciated that.

Oh, no shit. I'm sure you've been to Great Adventure. I grew up five minutes from there. People from North Jersey call me South Jersey. I consider myself Central New Jersey. If you went to Hurricane Harbor in the summer, I might have been your lifeguard.

I just feel like there are never any real symbols of Jersey that are represented in music videos. Everyone just skips over to New York or Philly.

That is definitely a conscious choice. I am a Nets fan and remain a Nets fan, unfortunately. I think I retain more of a desire to wear New Jersey on my chest than Brooklyn [, New York] on my chest. Not, that there's anything wrong with Brooklyn, but I feel more connected to New Jersey, conceptually. Some of the Nets stuff was from real time, that I bought when that stuff was available, some has been bought more recently. That's important to me actually. Even though I've been in New York for almost 15 years now, I still consider myself to be a New Jerseyan.

I think it's awesome to see you all pursuing your solo stuff. I mean, it makes sense—it's not like you had this big blow-up leading to a breakup.

More than anything else, I think it points to the health of Vampire Weekend in that we all have our own things, and things with each other and the band. As we're getting older, I will always treasure my 20s when Vampire Weekend was the only thing. I think, hopefully, our want to sustain that and having other things to balance it out is important. So, I agree. I think [Rostam Batmanglij's] record's really good. I hope people see that it's part of the universe of Vampire Weekend, which I think to be ever-expanding.