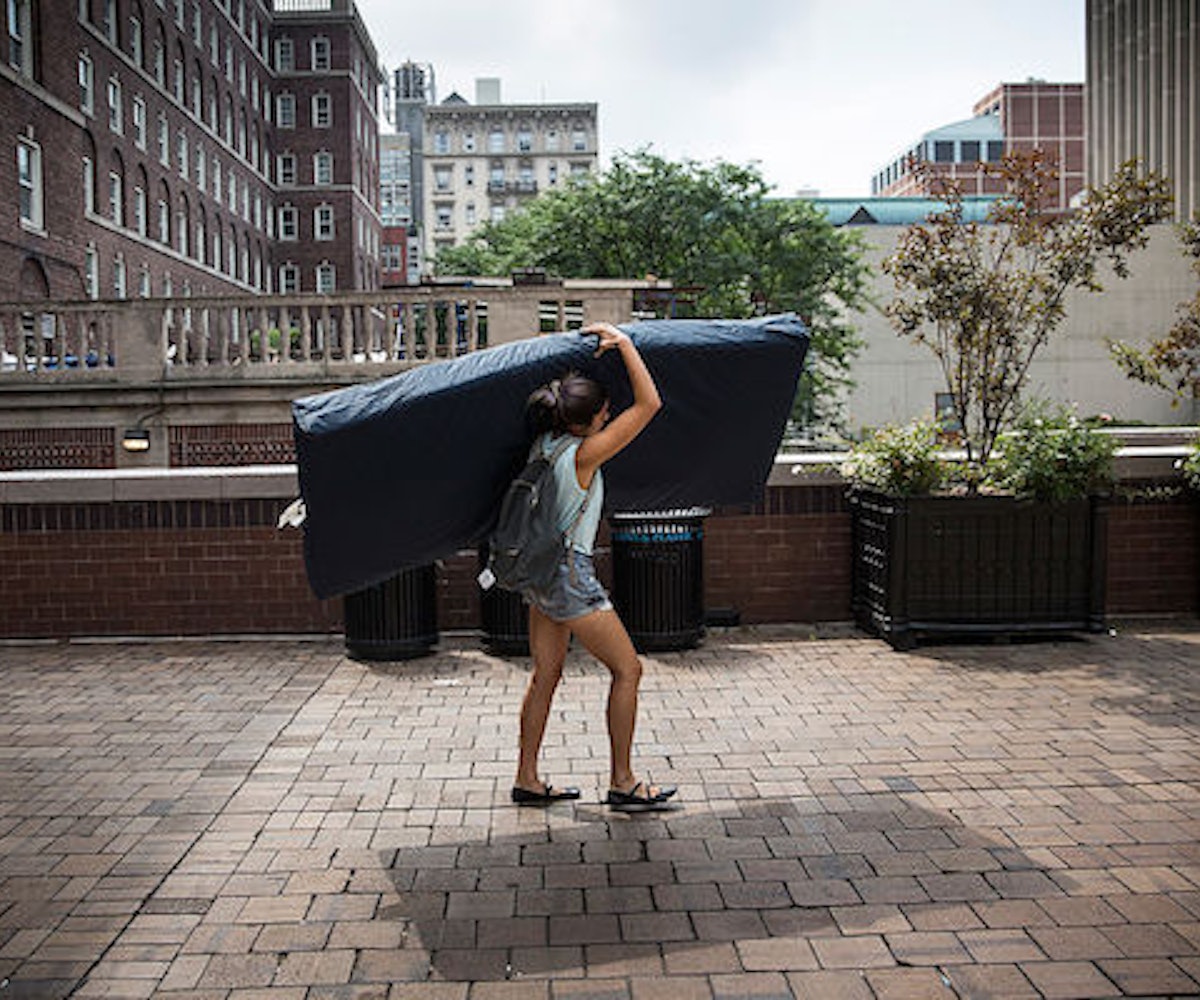 In 2012, then-Columbia University student Emma Sulkowicz accused student Paul Nungesser of raping her on her dorm room mattress on the first day of classes their sophomore year. The university found Nungesser not responsible for the alleged crime, which outraged Sulkowicz and led her to famously carry around her 50-pound mattress every day in what became a performance art piece called "Mattress Performance (Carry That Weight)." The university gave her credit for the performance as her senior art thesis, which Nungesser sued the university for on the grounds that Columbia was supporting an "outrageous display of harassment and defamation." Now, according to the New York Times, Columbia has finally settled with Nungesser for an undisclosed amount and publicly apologized to him.

Sulkowicz claimed that the university mishandled her case and the mattress project became her way of expressing the burden the alleged rape caused her. Although Columbia gave her credit for the project and even allowed her to carry the mattress on stage during graduation, university president Lee C. Bollinger famously refused to shake her hand as she crossed the stage. Nungesser claims that he was hounded and ostracized publicly during his remaining time at the university, even though the university disciplinary panel cleared him of the allegations. In a recent statement, Columbia said, "Columbia recognizes that after the conclusion of the investigation, Paul’s remaining time at Columbia became very difficult for him and not what Columbia would want any of its students to experience. Columbia will continue to review and update its policies toward ensuring that every student — accuser and accused, including those like Paul who are found not responsible — is treated respectfully and as a full member of the Columbia community." Sulkowicz did not respond to the New York Times's request for comment.

This news is particularly timely, as the Trump administration is looking into changing President Barack Obama's guidelines for handling campus sexual assault. According to Slate, U.S. Secretary of Education Betsey DeVos recently met with prominent men's rights groups who "see campus rape as a faux crisis manufactured to demonize and damage men and boys." This has left advocates for sexual assault victims worried about what could come next, as it is well known that victims of rape and sexual assault—who are overwhelmingly women—are often dismissed or blamed for behavior that is not their fault. Dana Bolger, a founder of the organization Know Your IX, told the Times, "I hope that schools don’t interpret this as a sign that they should be cracking down on student activism. Especially now as we see some retrenchment from the current administration, it’s more important than ever that student speech is allowed to thrive on campuses." Similarly, Janet Halley, a professor at Harvard Law School, says "I can’t tell from this statement whether they’re promising to suppress the speech of someone like Emma Sulkowicz. If they’re saying that they would gag her, then this is an ominous statement."

It goes without saying that if a person is truly innocent of sexual misconduct, they should not be bullied or ostracized. But it is equally true that justice for victims of sexual assault is still an uphill, exhausting, demoralizing battle. Women are still mistrusted for their accounts solely because of their gender identity—what they were wearing, if they consumed alcohol, if they were otherwise "asking for it." It is indeed a dangerous precedent if students like Emma Sulkowicz aren't allowed to express themselves freely in light of what they see as injustice. Indeed, if we are reverting back to policies that place undue mistrust on campus sexual assault survivors, exercises such as "Mattress Performance (Carry That Weight)" may be the only recourse survivors have to make their voices heard.