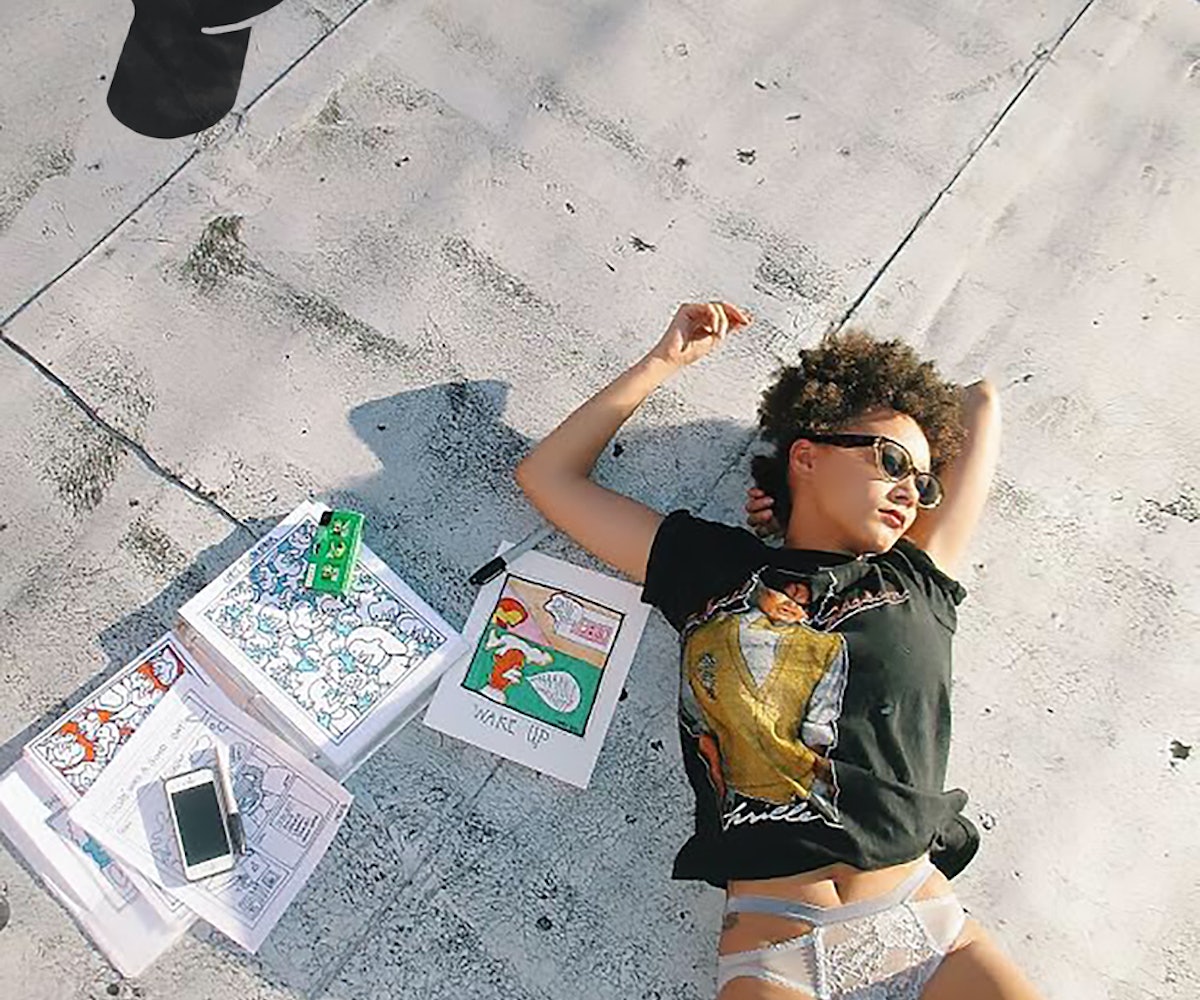 Corey Wash is one of a handful of models that are getting a lot of buzz right now. Though she's been working in the industry since she was 15 years old, her interest in fashion started developing when she was a child. The 23-year-old was born and raised in Baltimore, Maryland, where she competed in pageants and fashion shows. After graduating high school in 2011, Wash relocated to Brooklyn, New York, so she could further her career. However, she wound up being really turned off by the industry's standards.

"Sometimes I don't like being just a prop. I like modeling when I can like style myself and talk about issues and things I like to talk about," she says. "It's cool working and collaborating with people who you support and whose vision you also agree with."

Wash has recently moved to Los Angeles with her boyfriend, Melo-X, and is living the bicoastal life. She is a talented artist whose cartoon character Willoughby is a non-gendered stand-in for Wash herself, yes, but also the audience at large. She also recently made her directorial debut with Bibi Bourley's music video for "Ballin'."

Learn more about this dynamic creator in the interview, below.

When I [first] went to these agencies and tried to audition, either I wasn't tall enough or small enough or I had too many tattoos or my appearance was just a little weird. And then I would get street casts, and I ended up doing stuff for Reebok and Adidas and all of the other big names and then it's like, "Oh, now these guys want to cast me." But they didn't want to sign me. So it's just funny how they do it. Like, they want the look—that street, that cool downtown artist, artsy look—but they don't want to sign you. It's crazy, but it's bittersweet. There are ups and downs to that whole industry, but I think that's why I started my approach toward visual art and being able to control and create what I wanted to create.

I think it's being ready for independence. I was just so ready to just move out of my mom's house and do my own thing and not have to listen to any rules. I didn't grow up in a super-strict home, but my mom did have rules and she did have boundaries, as any parent would. I did apply to college and I got accepted into a few schools. But those tuitions really just terrified me. I was like, "Man, let me think about this." And then I just started going to New York, like over this summer, I would take the bus up. And I just fell in love with the city, and I was just like, "Oh my god, I have to move here." I was also into photography, not only modeling. Also, photography helped me find my apartment. I was doing a photo shoot on a rooftop, and then that rooftop ended up becoming my rooftop. I was like, "Mom, I'm moving to New York in a month."

When you first started developing an interest in the visual arts? How did the Willoughby drawings come about?

I want to say it was around like 2012, maybe like a year after I moved to Brooklyn. There was a lot of ups and downs with the whole modeling thing. I really wanted to express that frustration another way, through another medium. One day, I was just like, "I'm going to buy some canvases and an easel and some paint and just smoke and paint." I just ended up doing it more and more every day, and sometimes I wouldn't have money to buy canvas so I would find something like a piece of wood or some cardboard or a lamp on the street and I'd paint that. I just developed my interest in it, and for a while, maybe for the first two and a half years, I was really just painting and doing these large abstract paintings. I would paint on tables and chairs and anything that was around. I hadn't really developed a signature style yet.

Around 2015 is when Willoughby kind of came about. I was staying at a friend's apartment and we were hosting an event for a brand that we had launched. I was just drawing and doodling everything. Willoughby came about because I started putting little characters in place and I just did it more and more. I just kind of made it a thing where I would just draw a bunch of doodles every day, and that's kind of how Willoughby came about.

One thing I love is that Willoughby is genderless, and I think that's a nice way for anyone to be able to connect to this character. Was that intentional?

I would like to say it was very accidental, but everything happens for a reason, and I feel like I connect with everyone. I have a certain level of understanding for all human beings and I want Willoughby to be that voice and to be that person that can talk to everyone on every type of level. I don't want people coming to me about gender and me only speaking to one gender. I want to speak to everybody. Willoughby is everybody. Willoughby speaks for everybody. Some days Willoughby is black, some days Willoughby is white, some days he speaks to different audiences. But the main message is love and that we're all humans.

You've had a couple of shows and collaborated with other artists like Little Simz and Bibi Bourelly. How have those experiences operated as an extension of your creative vision?

My goal is just to spread my artwork and to show my work to different audiences, to people who I've never reached before. So it's always amazing to have friends who are also creative and talented and who also have this reach and share these great messages. I think last year was a really great year for me to work with a lot of friends that I love. Working with women—working with artists, not even just women—but working with artists who are also your friends who are also just very talented and who have a great message to share is always a great thing.

I saw that you participated in the Women's March. How was your experience?

That was just unbelievable. I mean, I can't even think of words for it. I mean, I can think of some words but... [laughs]. It is just so amazing. I was heading up to get some lunch and just as soon as I walked out the door, I see just fine people everywhere. It was amazing to see how many people—men and women—were out marching with their signs and coming together and being very loving and accepting of everyone. It was a great thing to witness, a great thing to be a part of. I'm excited to share those pictures with my future children and grandchildren, and just to do more. It was a great start. I'm so motivated. I came home and I'm just like, "Let's plan, let's write some ideas, let's make some art, let's keep this going, let's keep talking, let's do more." I want to do more things like that that are just more productive for the community.

That's what I'm looking forward to in the next couple of months, if not years to come. Just how we all come together and the art...

Where do you tend to turn to get information or to stay informed?

Everywhere. I mean there is so much information all around us. I literally live across the street from a bookstore. I'm always reading, I'm always watching documentaries and movies and films and reading and listening to audio books. I'm just always learning. I just do a lot of research; if you want to make any type of impact, you have to do your research. You have to know what you're talking about and you have to know what you're doing. I didn't go to college, and I don't necessarily knock people or talk down to people who are in college or who chose that route, but there is just so much information in the world you can have without paying $120,000, you know? There is so much information, and there are so many things that we can do just in our everyday lives. Even if it's just reading an article or just watching a documentary for 30 minutes. It's so many things we can do to educate ourselves. It's all in our focus and what we want to put our time and focus in.

I think that what I'm getting is that the highlight of this conversation is the importance of investing in yourself.

Yeah, you really just have to invest in yourself. And that's in so many ways—so many ways. Because we're young and I understand that we all want to have fun—I want to have fun too, I enjoy that—but you got to look at the big picture. It's not just about having fun. Yes, you want to live your life to the fullest, but in order to do that, you have to do things you don't want to do. You have to invest all of those hours and months and years and decades into putting in that groundwork, because if we don't do it, then someone else is going to do it, and we're just going to be looking at them like, "Damn, what was your secret?" And it's like, "I've just been working every day." People always ask me for advice, and I'm like, "Just do shit." Just start doing shit. Start knowing what you love. Just do it every day. Practice, read, get some inspiration. Go outside, go to the park, listen to some music you've never listened to. Watch a movie you've never watched. It's all around us; it's really just how you invest and what you do with the time that you have. And what you do with the resources that you have. Cause you could have nothing and still make something out of nothing.

What else do you have going on that you can discuss? I know you said you have that one collaboration coming up.

I'm just working on a lot of bigger works. I have a book series that I'm working on right now and then I also have an installation in May in L.A. Working on prints. I always have stuff. Everything is always for sale on my Instagram. People always ask me. That's just how I do it. I really like to be direct and just raw and personal. I don't really think I need a big website or anything. I think Instagram is the perfect way to connect and sell to people. It's a very personal thing. But yeah, just books and this exhibit in May and way more shit that you'll probably find out about later.