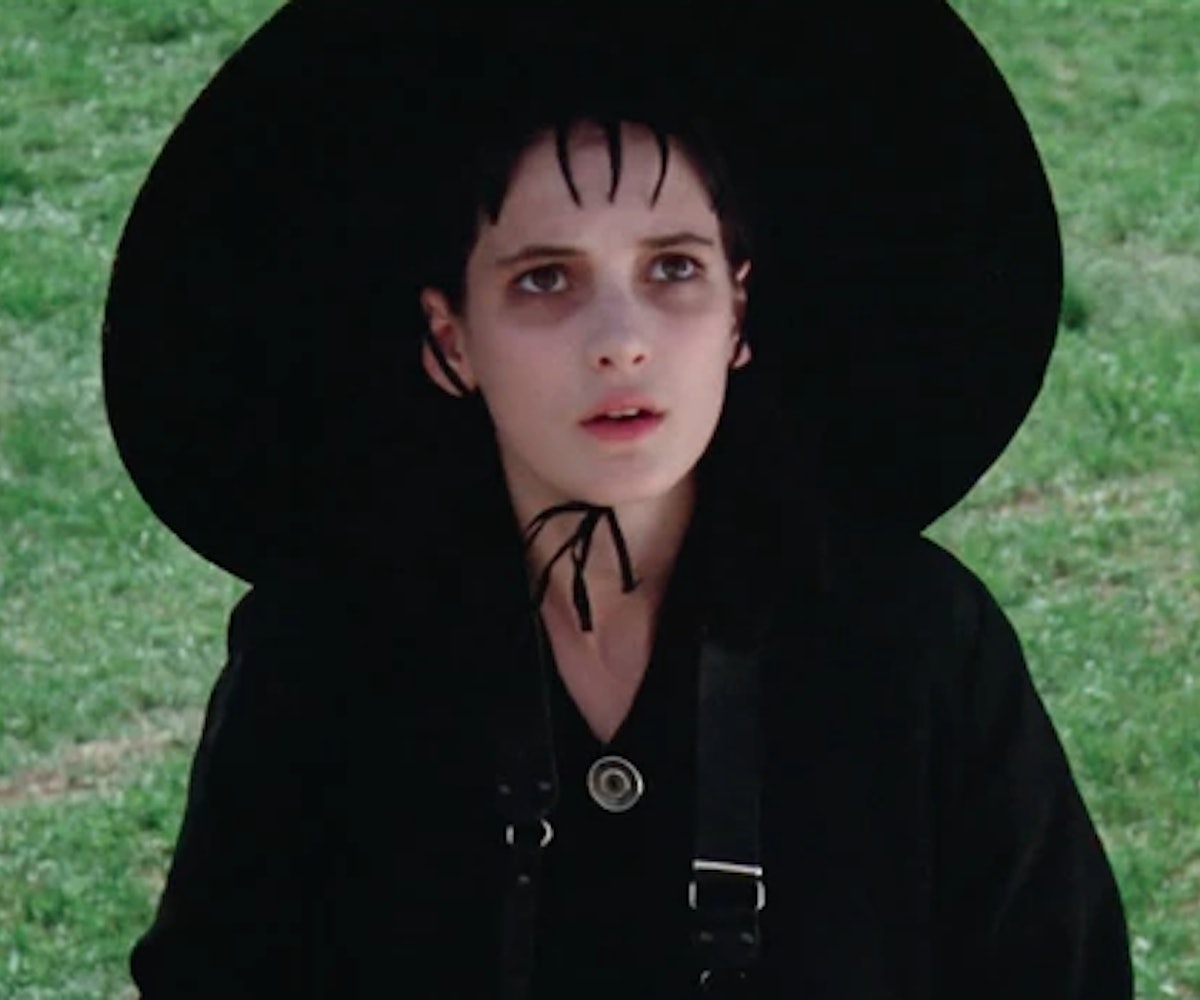 Throughout the month of December, New York's Metrograph theater has been showcasing goth films, from Nosferatu to Twilight. Goth films, an enigmatic bunch that includes horror, melodrama, and coming of age stories, are reliably stylish. Much of the appeal of goth culture is rooted in fashion, with intense blacks and elements of Victorian and punk aesthetics in equal measure. Goth fashion in film may be darkly alluring (such is the appeal of every vampire ever to grace the screen), but it typically doesn't go out of its way to be conventionally sexy. It's not usually thought of as a playful style, but because the look takes itself seriously, it can be satisfying to see it treated with humor. Over the course of his (admittedly uneven) career, Tim Burton has made himself the auteur of goth playfulness. The goth-with-a-wink look is the centerpiece of Beetlejuice, his anarchic 1988 dark comedy, playing through Monday.

Barbara (Geena Davis) and Adam (Alec Baldwin) Maitland, the young couple whose deaths trigger Beetlejuice's silly plot, are, as ghosts, doomed to wear the same outfits for eternity. Barbara's long floral dress and Adam's plaid shirt and khakis are meant to connote a bland, suburban style that separates them from the Deetz's, the arty New York family that moves into their home.

Winona Ryder's Lydia Deetz is one of modern cinema's most memorable goth girls. Ryder is perhaps the only actress capable of making spiky, broadly spaced bangs look good, and she brings sweetness to a character that could easily be a cliché. Lydia only wears black, of course.

We don't see her wear color until one of the final scenes, in which she is supernaturally forced into the beginning of a marriage ceremony with the troublemaking ghost Betelgeuse (Michael Keaton). Whether she's wearing all black or a frilly red dress though, Lydia looks inevitably goth as hell.

Lydia wears the most dramatic of all accessories, a broad, black lace-veiled hat, with aplomb. She's a teen who has made a decision to always look like she's in mourning ("My whole life is a dark room," she famously says) and judging by her outfits, it's no surprise she's kindly inclined toward ghosts.

Lydia can even make a uniform goth: in the film's final scene, she pairs her school uniform with a long black petticoat and black boots.

Lydia's look is set up in opposition to her parents. Her father, Charles (Jeffrey Jones), is a bland, suit-wearing businessman. Her stepmother, Delia (Catherine O'Hara), dresses in a self-consciously arty style, swanning about wearing a glove as a headband, or as one brilliant Twitter user recently pointed out, her husband's sweater as a pair of pants.

Delia and her friends, with their draped frocks, oversized earrings, and swirled hair, look straight out of an '80s magazine photo shoot.

We can't talk about the fashions of Beetlejuice without a look at its sleazy, mischievous title character. Betelgeuse is well known for his black-and-white striped suit. It's a Halloween costume-ready, eye-catching look, but he only wears it briefly. In one early scene he taunts Adam by conjuring up a matching outfit for himself. Seeing Betelgeuse in Adam's clothes emphasizes just how unhip they are.

Barbara and Adam's outfit provide an amusing counterpoint to Burton's bizarre visuals. At one point they refashion their faces (they're ghosts, after all) into something resembling a Hieronymus Bosch painting. Their newly scary faces are absurdly at odds with the conservative clothes they've been wearing all along.

While Beetlejuice may not be the greatest goth film in Metrograph's delectable series, the power of its costumes, with their mix of darkness and irreverence, can't be denied, and Lydia's charming, black-clad presence will forever inspire sad and stylish girls.