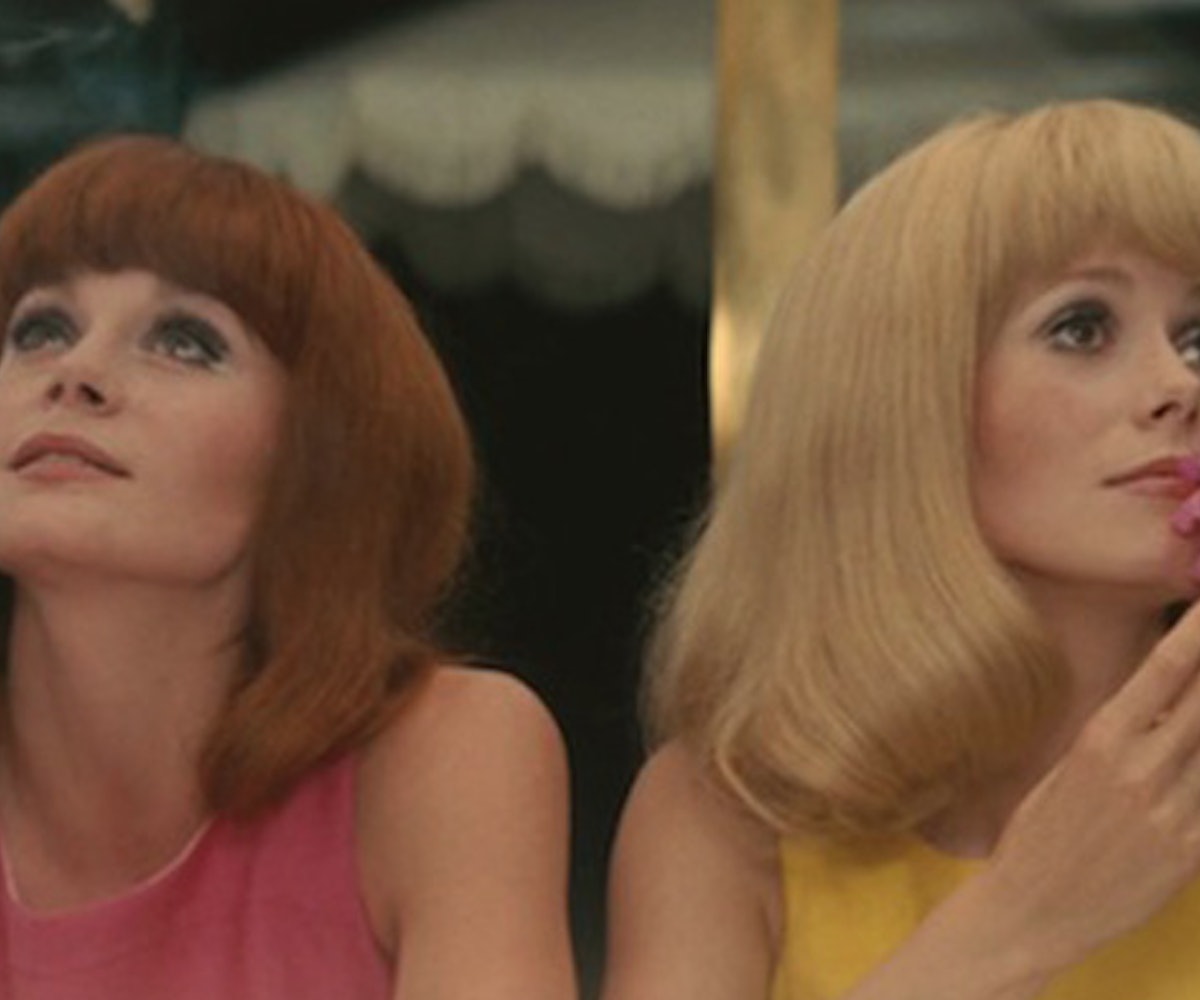 Jacques Demy's 1967 musical, The Young Girls of Rochefort, wraps a buoyant story of romantic entanglements (with a random aside about a murderer thrown in at one point) in an eye-popping array of pastel shades. Featuring the effervescent Catherine Deneuve and her sister, Françoise Dorléac, playing twins Delphine and Solange, the film may not have the emotional wallop of Demy's earlier Deneuve-starring The Umbrellas of Cherbourg (1964), but it does have a pure '60s sense of pop art fun and fabulous attire.

Dorléac never reached the heights of Deneuve's fame, as she died tragically young in a car crash the year The Young Girls of Rochefort was released. Knowing this adds a certain poignancy to her plucky performance alongside her sister. She would've turned 76 late last month, which provides an ideal opportunity to look back at this film.

Demy plays on the protagonists' sisterhood by having them always dress alike. It could be a corny device if the outfits weren't so charming. Delphine and Solange wear the same wide-brimmed hats and flippy dresses in different colors. One can imagine them having perfectly coordinated closets, and every element of each of their outfits is made to match.

Sisters dressing this way is par for the course in the colorful town of Rochefort. There are no little black dresses or drab suits here, and the townspeople's collective outfits provide a cheerful spectrum of yellows, pinks, and blues. With warmer spring weather on the horizon, there's much sartorial inspiration to be found in these pastels.

The colors of all these costumes—so obviously stylized and very much an auteurist choice—add to the heightened atmosphere of the musical. Not only do we suspend disbelief that people would break into song, but that they would all be dressed in perfectly complementary outfits while doing it. It's a giddy illusion, and when you consider that Rochefort is a town in which both women and men wear white go-go boots, it seems like a pretty fun place to live.

This is the kind of fantasy setting where you can wear a giant hat bedecked with a veritable bouquet of flowers and what looks like a cluster of grapes and no one comments on it. Solange ties the look together with dainty white gloves.

The costumes in the film seem to flow out of the small-town setting with a surprising ease. Delphine's all-yellow outfit perfectly matches a yellow building that she strides past.

Later, in the simplest ensemble she wears in the entire film, a blue-and-white outfit, she sits in a plaintive mood, appearing in harmony with the empty restaurant setting.

While the aesthetic of the film is unmistakably '60s, some of the costuming borrows from earlier decades. When the sisters are roped into performing in a show, they wear sparkling, form-fitting red dresses that recall Marilyn Monroe's sultry '50s femininity in Gentlemen Prefer Blondes.

Even when they're lounging around at home, the twins look fabulous. They wear sheer, billowing peignoirs trimmed in marabou. The two robes are the same but, of course, the colors are different. Solange's orange look plays off of her red hair, while Delphine's light blue gives her a Cinderella-like appearance. These sorts of robes—elegant and soft, and decadent in the suggestion that they are meant to be worn at home while looking so glamorous—also recall the costuming of Golden Age Hollywood cinema.

Pairing off with men doesn't break the sartorial spell. In a sly bit of visual comedy, when Demy shows the sisters embracing their suitors, the men are dressed alike in white jackets and pants, and both women are wearing spangled shirts (also with white pants). With outfits so harmonious, the film posits, How can they not get together? Fashion is a visual cue for relationships here, and one starts to wonder if, when the sisters go their separate ways, they'll start dressing differently. It's hard to say, but watching the film build a fashion statement out of sisterhood makes for unforgettably colorful fun.