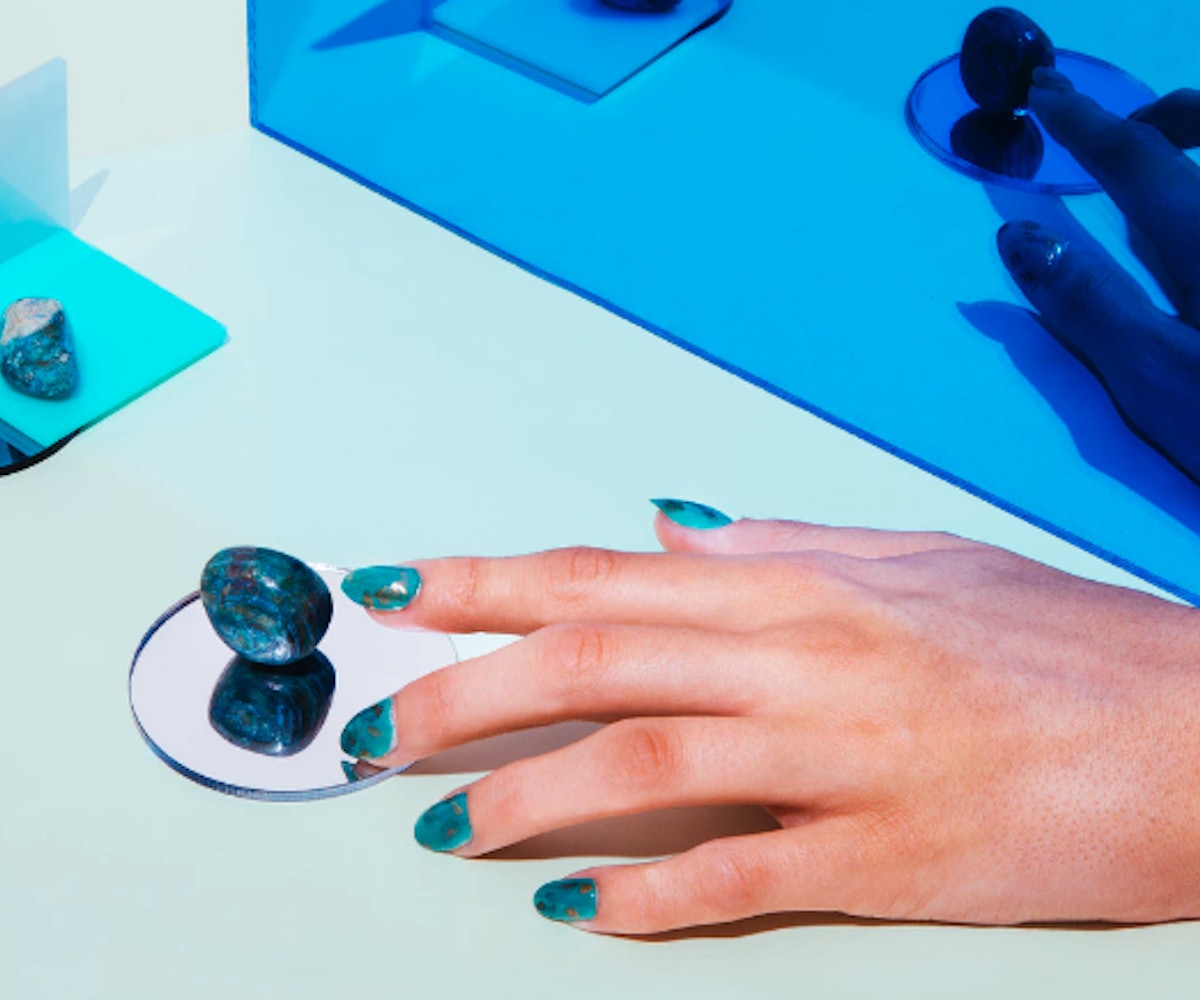 On the dresser next to my bed sit three books, a copper water cup, a black rose (complete with thorns) made of metal and leather, and a rock. The rock is rough and dun-colored on one side, the side where it rests on the table, and riotously jagged and pearlescent pink, like a cat's tongue, on the other, the side that greets anyone looking at it. It's a pink stilbite, and, while similarly sized crystals sell for $80 or more on Etsy, I bought it for about nine dollars at a crystal sale hosted by the High Desert Test Sites in L.A.'s Chinatown. Also for sale were tote bags and banh mi.

I bought this crystal because I thought it was beautiful. I bought it for decorative purposes. It was only after I'd decided to buy it that I noticed a little informational card propped up near the array of pink stilbite, which informed me that the crystal I was going to take home with me was known for "emanat[ing] a quite and unceasing joy, and [is] clearly [a stone] of the love vibration... When used in meditation, Stilbite clusters can bring about a gradual expansion of the sense of self... increasing until one has grown past the confines of the body, becoming a sphere of awareness no longer limited by the laws of physics, yet still connected by a cord of light to the physical body."

That quote comes from Robert Simmons' The Book of Stones, a book which has the very rare full-five-star review on Amazon (with well over 500 reviews), and which is a thorough guide to "the spiritual and healing qualities of 455 sacred stones." But even if you're unfamiliar with this so-called "crystal bible," you're probably pretty familiar with this kind of language surrounding crystals, which have become an integral part of the current wellness craze, and whose mystical properties have been espoused by people and publications ranging from New York magazine to Gwyneth Paltrow's GOOP to Broadly to this one. The crystal obsession has also been discussed—and summarily dismissed—by The Outline in a comprehensive takedown of all things wellness, which led to someone I know exclaiming, "Can't we have anything?"

But it was an article on Teen Vogue that made me want to learn more about crystals, and what sort of properties they really do possess. Or, rather, it was a tweet in response to a Teen Vogue article that made me seek out Dr. Emily Lakdawalla, a planetary scientist, and ask her where—if anywhere at all—the true magical properties of crystals lay.

Lakdawalla had seen the Teen Vogue tweet promoting its crystal guide, in which the company promised that crystals "might help you lead your best life," and replied that she would love to share "the real stories crystals can tell—of the birth of worlds, the rise of continents, the deaths of dinosaurs, of pieces of stardust born in cosmic explosions." I liked this response because, instead of simply shutting down the conversation around crystals by in effect saying, "You're being scammed if you like these things," Lakdawalla was expanding the conversation, and gesturing toward the wondrous properties of the world around us, including crystals; it piqued my interest enough to reach out to her.

Because here's the thing: In the year that I've had this piece of stilbite crystal on my dresser, I have not had anything resembling an "unceasing joy" in my life. Like, there's been joy, but it's been... erratic. It's ceased! (And restarted, and ceased again, etc.) I am still limited by the laws of physics. My awareness is not connected by a cord of light to my physical body. But that doesn't mean I don't love the crystal and like having close to me a totem I brought back from a special trip out to California. And I would like to know more about this crystal, and others to which people are drawn for manifold reasons, all of them legitimate but some of them based in science rather than speculation.

Below, I speak with Lakdawalla about why there's a resurgent interest in crystals right now, what some of the most fascinating—decidedly non-mystical—things are about crystals, and why she sometimes looks at the world around her and gets dizzy thinking about how awesome it all is.

Why do you think people—particularly young women—are turning to things like crystals right now to help them with their lives?

First of all, I want to mention that I have two young daughters who are often fascinated by things. They’re not currently fascinated by crystals, but one of them is super into the periodic table, which is a fun thing to be into. And so whenever young people get excited about something, I always want to tread very carefully and not come in as the big old scientific expert saying, "You’re all wrong."

I want to come in and say, "Yeah, crystals are really cool and exciting. Not for the reasons that you’re talking about them, but I like the fact that people appreciate them for their beauty, their diversity, their different shapes, their different colors."

And you look at these arrays, all these different shapes and all these different colors, and you see that there’s something special about each kind of crystal that makes it unique. It’s almost like Pokemon. You wanna collect each one and see, "Oh, this one’s needle-shaped, and this one’s black, and this one’s like a big column, and some of them are hexagonal and some of them are octagonal." And they’re fascinating. And so I want to support young women and them being excited about all those different things, and then explain to them what you can learn from all those different shapes.

What are some of the most fascinating things about crystals?

The shapes and colors of crystals are something that a branch of science, called mineralogy, uses to identify where they came from and how they formed. So, for instance, if you have Peridot, which is the birthstone for August, Peridot is the gem form of a mineral named Olivine. And Olivine is this green mineral, it’s probably the most common one on the Earth; our whole Earth is made of it. Asteroids are made of it. Mars has it. The moon has it. It’s one of the most common and primitive minerals in the solar system, and [it] tells you that Earth has had a long, dynamic history of geology over a lengthy period of time. When you find Olivine, it means that you’ve got access to a rock that came from deep, deep inside the Earth, and so you already have a story there. Hold a piece of Olivine, of Peridot, in your hand, and you know this rock didn’t start out here on the surface. This rock came from 10, maybe a 100 miles below the surface of the planet. And somehow, some gigantic force brought it to the surface. And that’s a cool story right there. How did that happen? Where did it come from? What changed? What made this thing take this journey from the inside of the planet?

I understand people's impulse to look for traditionally mystical properties in crystals, but when the actual story is so inherently compelling, I think something gets lost in not acknowledging it. Especially because it speaks to a different kind of universality and a different kind of connection between ourselves and the universe around us.

Like you, I don’t know why people want to see these other properties in minerals. I think part of it is that our American culture, we want to buy a thing that is going to make our lives better. And, I think, it’s not necessarily bad to focus a feeling in an object. You have a talisman, you say, "Okay, this thing represents love." Or: "This thing represents kindness or hope." And you know, a lot of us, especially this last year, have maybe had a hard time, a little bit of crisis of hope. And it’s nice to have an object, a talisman, that you can hold and say, "Here, this is going to help me feel more hopeful." If that helps you, then great, but, at the same time, I think that you do miss a lot of what is truly amazing and inspiring about the world. If you can arm yourself with some knowledge, you’re less likely to be misled by people who want to tell you comforting lies.

I think that in a time of such rapidly advancing technology, there’s definitely a connection in why some people are looking toward all-natural things as being "the answer." And I don't think it's helpful to have an attitude of, like, "This is just bullshit. You’re an idiot if you think this." Because it’s much more complicated than that. And the true connection between everything is just so amazing.

How amazing is it that the minerals on Mars, the crystals on Mars, are the same that we find on Earth? Before we went and explored the planets, we didn’t know that. We thought it was possible, but we couldn’t have figured that out until we got there and investigated and [could say], "Oh, we recognize this rock. Oh, that tells us a thing about the history of the planet." And so, everything is connected in that way. And so, there’s all this relationship, these links that when you first look at it from the outside, it’s just a bewildering number of different mineral names and they don’t seem to have anything to do with each other. But as you learn more, as you dig deeper, you see how connected everything is. And it’s just... it’s fun. I feel weird sometimes. I feel a sense of almost vertigo walking outside and I see the history of the place I’m in. I see all the actions that are happening on the world that I’m standing in. I see the future because I know what geology and weather are doing to this place. And it’s kind of awesome.