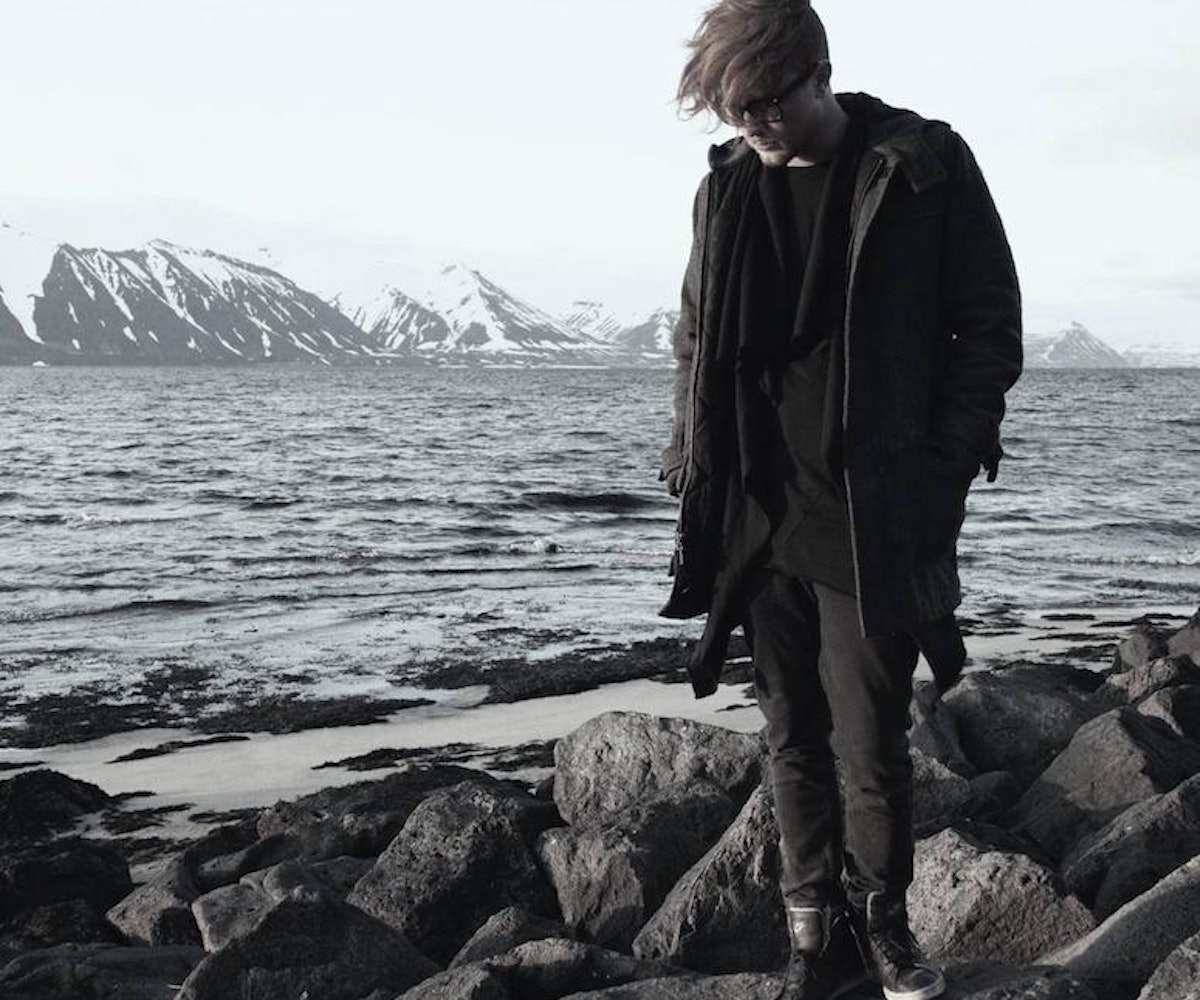 Los Angeles-based Justin Taylor Phillips, aka Crywolf, has just finished his set at Concord Music Hall in Chicago. Instead of retreating to the relative safety of the green room downstairs, he makes a beeline for the merch booth to talk to the swelling crowd of fans. He’s exhausted, hair matted down with sweat, but beaming. He greets each fan like an old friend, listening to every story, giving out damp hugs and making fantastically comical grimaces for selfies. The throng dies down after about an hour and we finally get to delve into the belly of the venue. He immediately turns toward NYLON, grinning. “Did you hear the falsetto? That high note? I can never do it when I practice, but on stage…it just comes out of me.”

This freedom within him is a somewhat new feeling for the indie electronic producer (which might be why he’s so pleased with himself). Phillips spent years dancing between what he wanted to create and what he thought people wanted him to create, birthing a line of dance-inspired EPs that were received well, but never gave him much personal satisfaction. Then, in what almost seemed like a do-or-die effort to find his artistic path, he launched a PledgeMusic campaign in 2015 to fund a trip to Iceland. He reached his goal by over 300%, passing on offering traditional rewards like CDs and posters in favor of selling services like “Crywolf Will Mail You Something Weird” and “Crywolf Calls Your Parents To Say What A Great Kid You Are.”

So, armed with little more than a few suitcases, Phillips left for the small fishing village of Bildudalur, Iceland (population 166), in summer of last year, promising to sit in isolation for a month, writing music every day. The result was Cataclasm, a 10-track album that shattered everyone’s expectations, including his own. With a sound Billboard called “powerful and cinematic,” Cataclasm showed a creative depth that cleaved this body of work away from the rest of Phillip’s catalog, and in the process, saw fans start flocking in. Whatever he did in Iceland worked, as he’s currently wrapping his first national tour with Brooklyn’s rock-edged group Savoy. NYLON took the opportunity to talk with Crywolf about finding his true, artistic self, and the long, hard road to get there.

You're on the tail end of your first big tour, can you recall any favorite moments?

I knew some of these bigger cities on tour were going to be huge, like New York, Chicago, and Boston. However, some of these smaller cities have blown me away with how many Crywolf fans have come out. The third show we played was Orlando, and I didn’t think it was going to be packed at all. When my intro played and I walked on stage, the stage lights turned on and I was just floored when I was greeted by a full house all singing along to my music! I just lost myself in that performance, because almost every word I sang was practically drowned out by the audience singing along.

What's it been like to have the opportunity to meet all these fans for the first time?

It’s one of my favorite parts of touring. I think I have some pretty awesome fans, so I love getting to meet them and getting to know them. Hearing their stories about how they’ve been affected by my music always makes me so deeply appreciative for the phenomenal things music can do even without the creator knowing about it. At the meet and greet in Baltimore a mother and her daughter came up and hugged me, crying. The mother told me that her daughter had been in the hospital with a disorder that they said would kill her, and they didn’t give her much of a chance of living. She said she listened to my music every single day, and that it gave her hope to keep fighting. She ended up making a full recovery, and got to come out to the show to see me for the first time. It touched me so deeply to see her there, smiling and looking incredibly healthy and happy.

What’s something your fans don’t know about you?When I was a kid I was obsessed with animals. I think I had over 50 different pets from the ages of 6 to 14. My favorite pet was this tiny baby flying squirrel that I rescued from outside my house when it was being attacked by a cat. I named it Sugar and nursed it back to health. It used to come with me everywhere I went, peeking out of the front pocket of my shirt.

You bunkered alone in Iceland to create your album Cataclasm—did anything about that experience catch you off guard?

I wasn’t expecting the solitude to affect me as heavily as it did. Right near the middle point, it started to be really difficult. I found myself talking out loud all the time, making strange sounds. Part of that had to do with the fact that it only got dark for one hour a day—it made me lose track of time, which really messes with a person’s brain. Ultimately, this trip was an experiment, so even negative effects like that were a crucial part of the process, and contributed to the final sound of the album.

What did the Iceland trip teach you about yourself?

A ton, but I think one of the most salient things was the beauty of quiet; the value of silence. It’s easy to forget that, living in a city like Los Angeles, in an area like I do right near downtown. You don’t get many chances to introspect in silence. I think the new album reflects that renewed appreciation.

Are you classically trained?I took some guitar lessons when I was a kid for about two years, but it didn’t do that much for me. It was mainly scales, basic things. Pretty much all my instrumental knowledge is self-taught. I feel like I cheat in a lot of ways, there are things I’ve figured out so I can sound really good at a certain instrument. I’m practical about it. I isolate and learn what I need to know really well. There are certain chord structures I’ve learned that work really well and I use over and over again.

It’s an easy trap to fall into.It’s something I get on myself about artistically because I know if I pushed myself even further I could be so much better at these instruments. Sometimes I feel like I’m coasting by and I yell at myself. I want to keep pushing myself in new directions instead of resorting to the same things.

To be fair, wasn’t that Cataclasm?

Production-wise… Absolutely. I had been doing the same thing with my production, resorting to the same tricks, the same signature Crywolf things. With this album I wanted every step to be something new, something I haven’t done before. Even if other people don’t notice it, I do, and it makes the performance so much more meaningful. That’s what I want to do with my instruments!

With your songwriting, do all the lyrics echo personal experiences?I like to leave stuff a little ambiguous. There absolutely is motivation and reasoning in every song, but the cool thing about writing in a poetic style as opposed to a storytelling style is that people can give their own meaning to it. Sometimes I don't even know what it’s about when I write it. I’ll be at the piano and think “oh, this is so good” and it comes out of me because there’s this intuition of knowing exactly what comes next. It’s this nebulous thing where I know what I’m supposed to say but I don’t know exactly what it’s about. There have been times where I re-listen the next day and realize what it was about; other times that realization it takes months.

It really is. I really do see songwriting in that sense. It’s reaching down to this subconscious place where there’s all of these thoughts and all of this knowledge that you haven’t paid attention to with your conscious mind. You’re tapping into all these things in really profound ways of trying to understand a situation you can’t even comprehend yet. I’ve described songwriting as a catharsis so many times because it’s getting out all this stuff that’s lodged inside that I can’t get out with my logical mind. When I look at my own work, it sometimes seems like someone else’s because of it. I think, “Who the fuck knows who wrote this!” I love the idea of being surprised by myself; it’s such a crazy thing.

You seemed to struggle with finding your voice in your early work. When did it click for you?Since I was about 20 I haven’t found difficulty in expressing those things lyrically, but I found difficulty in rectifying the space between what I was making as an artist and what I was saying as a person. When I started, I was making acoustic music…but what I wanted to be making, what I thought I should be making was heavy dubstep that makes people dance. I was scared to put out the acoustic stuff because I thought people wouldn’t like it if they couldn’t rage to it. So I would put out an EP with three heavy songs and have two where I slipped in what I wanted.  Cataclasm was the first time that I allowed myself to express myself fully.

There’s been quite a different response to the music now that you’ve removed the self-editing.Definitely. I was talking about this to a fan yesterday. They were telling me they had a hard time finding their own voice and I went on this long rant about how I’m not opposed to seeing what’s popular musically. I have friends who are amazing producers who choose to put their finger up to the wind and say, “I’m going to make this.” For me, for some reason, if I try to make something for any other motivation other than I want to make it, it just utterly fails. It’s terrible. I think the reason is that for me, art is self-expression so any deviation from that means it loses its purpose.

That realization has to feel freeing.Growing up I always tried to emulate and little did I know that the whole time, all I had to do was stop giving shits about what anyone else wants to listen to and suddenly everything would be so much better (laughs). I’ve never felt more connected to my artistic self. I feel like every salient moment in my life has included me ceasing to give a shit. This whole journey has been me realizing I can do my own thing.

If you had to keep only one song from the album and throw away the rest, which would it be?“Anachronism.” It’s the perfect intersection of production and songwriting for me. It also covers some territory that is unfamiliar to me, songwriting-wise. There’s so much violence in that song…so much intensity and anger that I didn’t know was inside of me until I wrote it. After I wrote it I was like, “Whoa, Justin, what are you so mad about?” Something about the aesthetic of that song is like a cornered animal. But that's the cool thing, I get to express it, and then it’s gone.