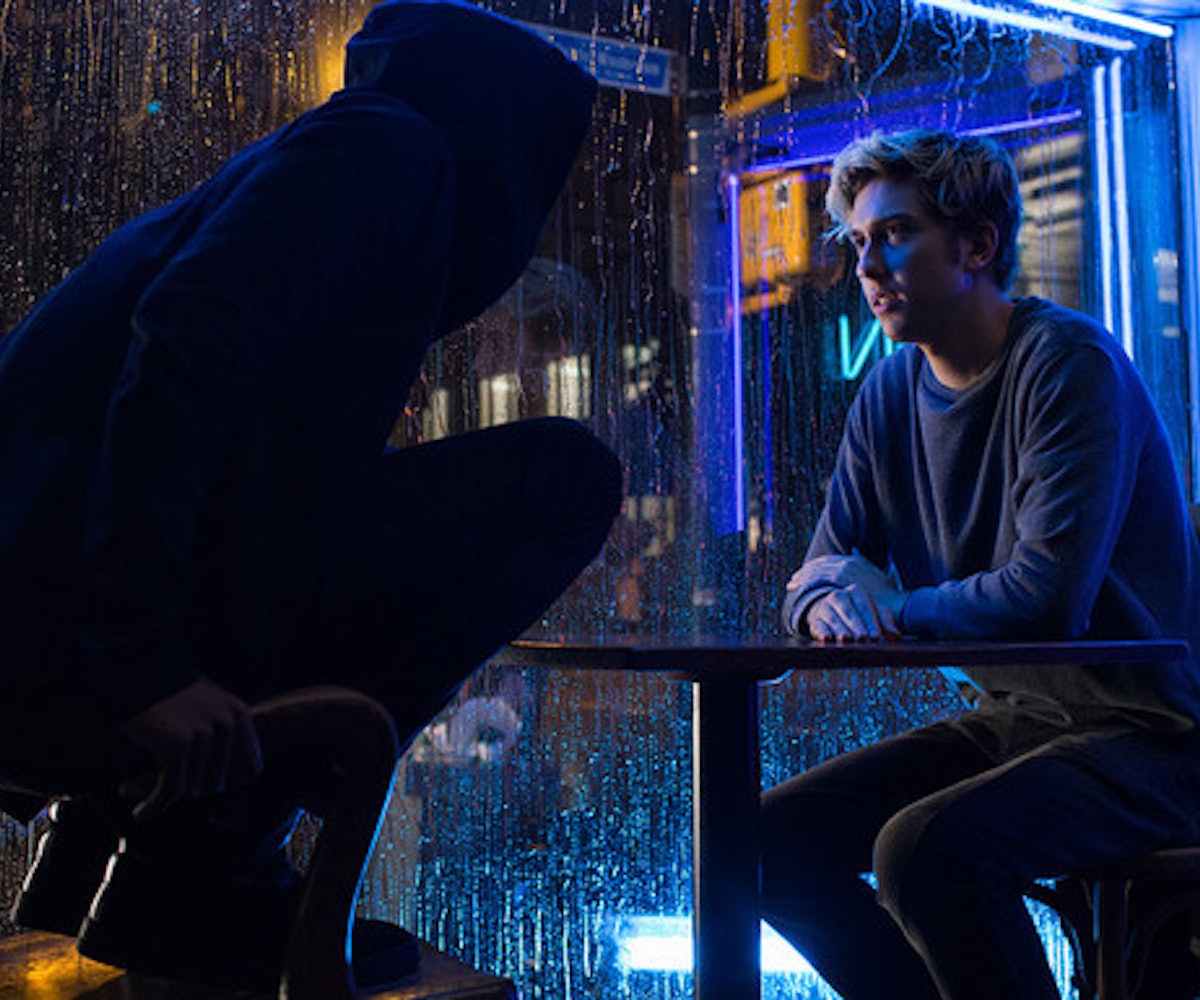 One afternoon you happen upon an enchanted notebook imbued with the power to instantly end the life of anyone whose name is written on its pages. Do you chuck it in the garbage, or use it to make the world a better place?

It’s not your latest ethics homework essay, but rather the hook of Death Note, a mega-popular Japanese manga and anime, remade by director Adam Wingard as a live-action film for Netflix. Across the original series’ 19 dense hours, bright but bored high schooler Light Yagami comes into possession of the accursed book and slides into villainy as the power to take life breeds an untethered God complex in him. It sends him on a homicidal rampage that leads straight into an impossibly elaborate game of cat-and-mouse with a squadron of eccentric police detectives, chief among them the oddball L. Also in the mix: a cadre of evil businessmen, a jealous and lovelorn god of death, approximately two dozen red herrings, and one pulse-pounding set piece in which a character eats a bag of potato chips.

So when Wingard began the task of adapting this Gordian knot of moral philosophy and detective-thriller chess, he thought of pruning as his first step. “The script had a really long development process,” Wingard tells us. “It’s a tricky story to film because at the end of the day, Death Note was never designed as a movie. It’s a sprawling, serialized work. It was one of those things where we knew we couldn’t cram everything into one movie.” He clipped a subplot here, combined some scenes there, and ended up with something a bit more familiar to American audiences. Nat Wolff stars as Light Turner, a slightly meeker guy than his Japanese counterpart, a few steps closer to your classic clique-less loner. “In the original, Light’s kind of a megalomaniac,” Wolff says, “and you get to watch him fully embrace that side of himself that’s always been there. In this one, you’ve got a kid who’s immature and thinks from an absolutist perspective, and learns life and ethics are much more complicated than that.”

Light’s shift toward ethical cloudiness is only one-half of a larger narrative switcheroo. The other is his girlfriend Mia (Margaret Qualley), originally a pliable puppet for a cruelly manipulative Light who's been recast here as the darker one of the two. She takes to remotely killing like a fish to water, and ends up pushing Light to uncomfortable extremes in what he thought was a righteous quest. Their dynamic is explosive, and just as disastrous as the word would imply.

And it’d be interesting to see how it’s corrupted him, because ultimately, this version of Light is a bit more altruistic and naive than the manga version. That’s where the Mia character comes in, because in some ways, she’s much closer in personality to the original Light than our Light is. This version is about the coupling of Light and Mia, and how they join to create Kira. [Demon god] Ryuk’s not even giving the book to Light. At the beginning of the film, he sees Light and Mia having their exchange and something clicks in him, he sees that these two will create the most havoc for him to enjoy.

After reshaping the main characters, Wingard’s next major departure concerned the overall tone of the picture. He split the full-bore hysteria of the original into something more fragmented, but ultimately closer to his own horror wheelhouse (he directed last year’s coolly received sequel to The Blair Witch Project). Between sudden jabs of hocking gore, he nests flirtations with other genres entirely. “I saw the violence in the first half of the film being explosive and operatic and over-the-top,” Wingard says:

Every time something happens, we’ve got blood spattering on the lens, coming right at you. And this is couched in Light’s POV—he’s having fun with the Death Note, but things get more real when L enters the picture, and the depiction of the violence changes a bit. It shifts over to a mode that’s less fun, less in-your-face. I dunno about it being a slasher film; there’s some influence from Final Destination. But the movie itself is a genre mash-up—it’s got horror, action, coming-of-age, romance, even a musical moment.

“[The movie]’s got a satirical edge to it,” Wolff adds, “a certain humor. It doesn’t take itself too seriously as a film, though it takes its own concepts seriously. The notion of having absolute control in an uncertain world—we’re seeing now how that can be a disaster in the real world. Nobody’s ready for the responsibility of having all that power.”

Wingard learned a similar lesson about the hazards of great responsibility during the earliest gestation stages of this production. When the Death Note fandom first got word that Wingard had cast a Caucasian actor in a role that had been distinctly Asian in its first incarnation, charges of whitewashing broke out and a backlash accordingly followed. The director, though, defends his creative choices as logical and innocuous. “From the get-go, there was never a version of this where the movie would take place in Japan,” Wingard says, visibly unperturbed by the line of questioning. “This was always for a Western audience, a new audience. So Light could have been anyone. When we went to cast the movie, it was about picking the right actor for the role. Light didn’t have to be white, but Nat really embodied the sort of person we were trying to create.”

“In terms of the controversy, I think it had a lot to do with bad timing,” he continues:

It’s not like this is the first Western adaptation of an Eastern property. Ghost in the Shell wasn’t a whole thing when I signed on, and then it was by the time we were getting a cut ready. And my producer, Roy Lee, has been doing this for years; The Departed was a Hong Kong film, the remakes of The Ring and The Grudge... There’s plenty of precedent for this without the controversy. And here’s the thing: At the end of the day, this is a good conversation to be having! It’s not like this controversy has been a negative force. I don’t think it’s even negatively affected the movie. If anything, it’s brought more attention.

Wingard’s not worried about irate fans mocking up their own Death Notes with his name. He believes in what he’s done, and thinks that plenty of viewers will, too; he’s already got plans for a string of franchised sequels knocking around in his head. Moreover, he’d come back for any hypothetical sequel one installment wiser, doubly prepared to wrestle a labyrinthine Japanese morality play into the shape of a Hot Topic-approved blockbuster. He’s earned a bit of perspective, not just on the minefield of cinematic translation, but on the concept of a Death Note itself. Wingard was initially drawn to the project due to a fascination with its subject, but now that he’s on the other side of this process, would he still give it a spin? He laughs. “I wouldn’t use it at all!”

Wolff, however: “I actually made my own before we started the movie, just for fun, to see what it’d feel like. And I thought I wasn’t gonna be able to kill anybody, but then I was just cruisin’ through names.”