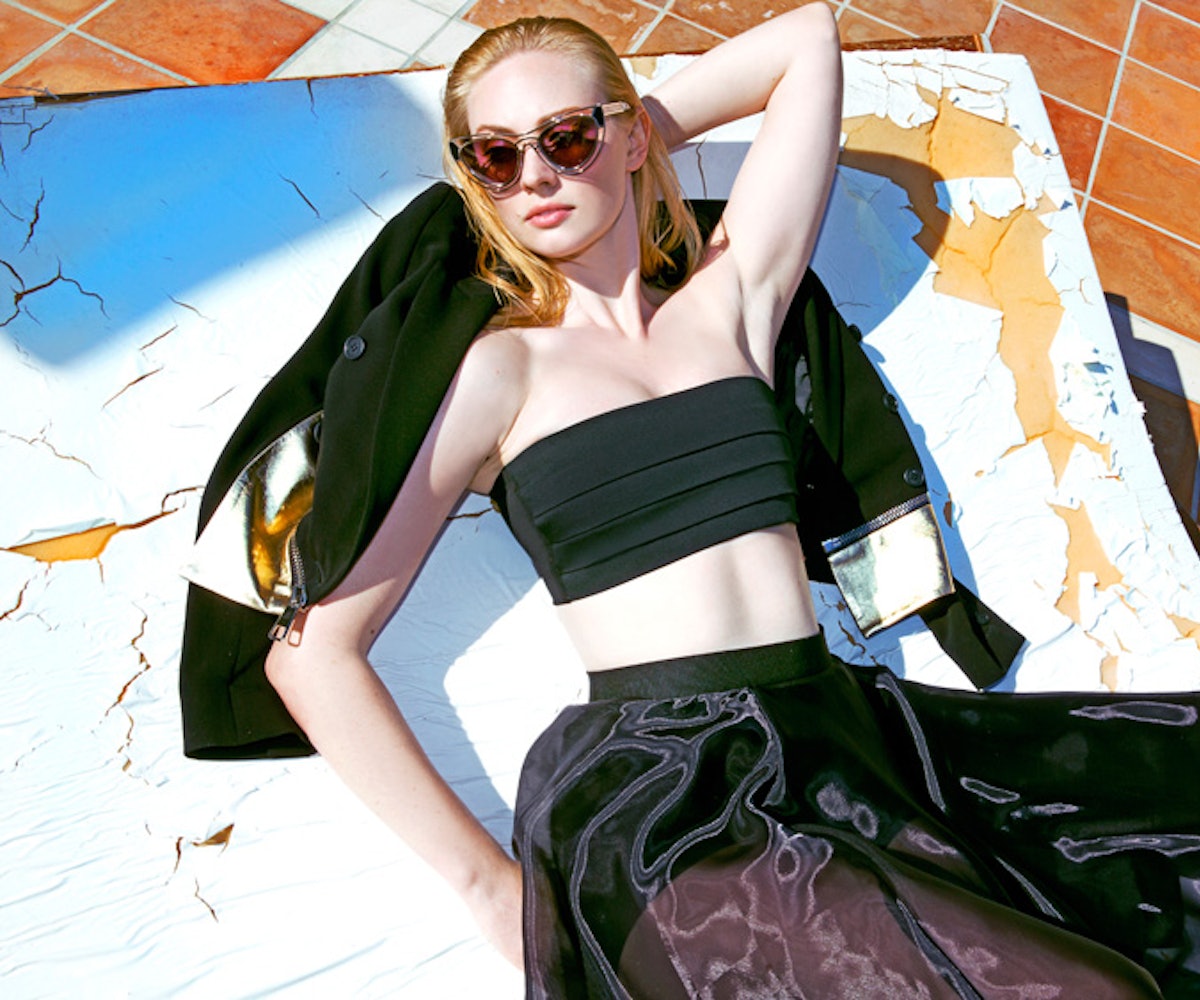 So focused is actress Deborah Ann Woll on honing her craft that she’s been known to let all of her emotions sit very close to the surface. “Most people, when they feel a laugh or a sob in their throat, might choke it down because it’s inappropriate,” she explains over a bowl of tomato basil soup in the booth of a Beverly Hills steak house. “You don’t want people to see you cry over something as silly as a commercial. But I don’t want to hold back, because that trains me to hold back. So, when people watch me, they’re seeing someone who is actually feeling something, not someone who is squeezing and trying to push out a tear.”

For this reason Woll, a graduate of USC’s prestigious School of Theatre, is drawn to intense projects—by nature, her work is genuine and anguished. After a seven-year run as the scene-stealing vampire Jessica Hamby on HBO’s recently concluded True Blood, she now takes on the role of Karen Page in Marvel’s Daredevil, a new series out this April on Netflix that’s adapted from he original comic. “It’s definitely darker than the others,” she says, noting that the show is the first in a slate of five live-action adventure series (also including Marvel’s A.K.A. Jessica Jones, Marvel’s Iron Fist, and Marvel’s Luke Cage, all leading up to the characters teaming up in Marvel’s The Defenders) to premiere only on Netflix.

The origin story of Daredevil goes like this: A young Matt Murdock pushes a man out of the way of a truck carrying toxic waste, which spills on Murdock, blinding him, but heightening his other senses drastically—just before his father is murdered by gangsters. Murdock becomes Daredevil (played in the Netflix series by Charlie Cox), a superhero intent on avenging his dad’s death by fighting corruption in New York.

As for Page, she goes all the way back to the first issue of the comic in 1964 as Murdock’s secretary and love interest. The character did, however, get a revamp from writer Frank Miller in the ’80s. “She went through all kinds of mutations,” says Woll, taking a spoonful of soup and letting it drip back into the bowl. “She starts out [in the ’60s] very Leave It to Beaver—a little stereotypically feminine—then [later], she becomes a heroin addict and does some pornography and sells out Daredevil to the bad guy for some drugs, gets clean, and gets back together with him, and then she dies.”

Woll is highly charismatic as Page—her interpretation of the character falls somewhere between the angelic early version and the out-of-control iteration. “There’s this old idea that women in men’s stories are either Madonnas or whores, and she is both, but at different times,” says Woll. “What I ended up doing, and what Marvel was trying to do, was to merge those two. She doesn’t have to be a Madonna or a whore—she can be good and bad all at once, which is more modern.”

This translates to story lines where Page is often insinuating herself into the fray—like one scene where she starts to investigate the bad guys when she thinks no one at the newspaper is listening to her concerns. “In the same way that Matt Murdock can’t abide the corruption and the mistreatment of people in his city, neither can Karen,” says Woll. “She’s throwing punches—she uses the law and the media—but she’s working toward the same goal. There’s a bit of a demon in her. Part of her needs to have an adrenaline rush; she’s not a damsel in distress. Someone said to me, ‘Karen keeps getting in trouble.’ I said, ‘No, she is trouble.’”

Page’s strong female character aside, Marvel’s Daredevil struck a chord for Woll that hit even closer to home. Like Matt Murdock, Woll’s real-life boyfriend, EJ Scott, is blind. Scott has a degenerative eye disease called choroideremia that is causing him to lose his sight. Woll and Scott do a lot of fund-raising and outreach to raise awareness for the disease, and have even produced a short documentary on Scott’s life. “It’s not too coincidental,” says Woll about the parallel lives she’s living on TV and in reality. “I would be lying if I didn’t say that I’m personally interested in stories about disabilities being out there. Because EJ’s a comic book fan, and Daredevil is a blind character, there’s no better fit for me.”