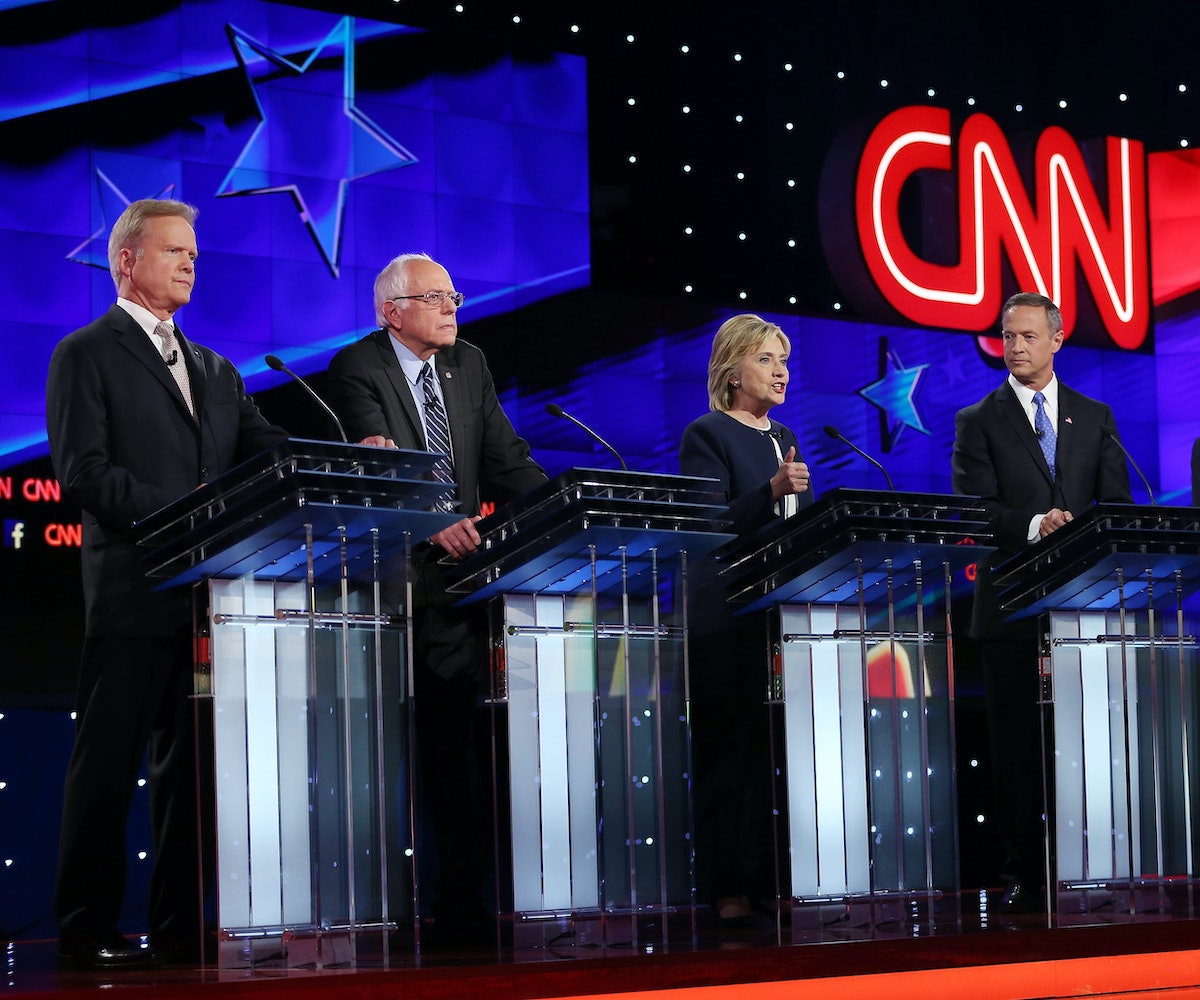 Oh, you democrats—we just want to muss your hair and give you all lollipops for offering up an issue-focused, polite, unified debate. One day, when you grow up, you’ll figure out what Republicans already know: Debates are won by the candidate who proves they’re the most awful.

Seriously, though, at last night’s CNN debate (wonderfully moderated by sexually attractive silver meerkat Anderson Cooper) democrats mostly kept their arms in the car and stuck to talking points. Even when Lincoln Chafee, Bernie Sanders, and Jim Webb veered off the trail, they did so without anger or fudging the facts.

In short, it was a pretty good, informative, not at all crazypants couple of hours that won’t change the race except to put Chafee and Webb even further behind. That doesn’t mean we won’t GIF the hell out of it, though.

Vermont Senator Bernie Sanders: “Let me say this—Let me say—let me say something that may not be great politics. But I think the secretary is right, and that is that the American people are sick and tired of hearing about your damn emails.”

Former Secretary of State Hillary Clinton: “Thank you. Me, too. Me, too.”

Sanders: “You know? The middle class—Anderson [Cooper], and let me say something about the media, as well. I go around the country, talk to a whole lot of people. Middle class in this country is collapsing. We have 27 million people living in poverty. We have massive wealth and income inequality. Our trade policies have cost us millions of decent jobs. The American people want to know whether we're going to have a democracy or an oligarchy as a result of Citizens Union. Enough of the emails. Let's talk about the real issues facing America.”

Clinton: “Thank you, Bernie. Thank you.”

CNN Moderator Anderson Cooper: “Governor Chafee, you have attacked Secretary Clinton for being too close to Wall Street banks. In 1999, you voted for the very bill that made banks bigger.”

Cooper: “Are you saying you didn't know what you were voting for?”

Chafee: “I'd just arrived at the Senate. I think we'd get some takeovers, and that was one. It was my very first vote, and it was 92-5. It was the…”

Cooper: “Well, with all due respect, Governor…"

Chafee: “But let me just say…”

Cooper: “.. what does that say about you that you're casting a vote for something you weren't really sure about?”

Chafee: “I think you're being a little rough. I'd just arrived at the United States Senate. I'd been mayor of my city. My dad had died. I'd been appointed by the governor. It was the first vote and it was 90-5, because it was a conference report.”

Cooper (to group): “Franklin Delano Roosevelt once said, ‘I ask you to judge me by the enemies I have made.’ You've all made a few people upset over your political careers. Which enemy are you most proud of?”

Former Virginia Sentor Jim Webb: “I’d have to say the enemy soldier that threw the grenade that wounded me, but he's not around right now to talk to.”

Sanders: “I believe that the power of corporate America, the power of Wall Street, the power of the drug companies, the power of the corporate media is so great that the only way we really transform America and do the things that the middle class and working class desperately need is through a political revolution when millions of people begin to come together and stand up and say: Our government is going to work for all of us, not just a handful of billionaires.”

Cooper: “Senator Webb, how would you not be a third term for Obama?”

Webb: “I got a great deal of admiration and affection for Senator Sanders, but I—Bernie, I don't think the revolution's going to come.”

Cooper: “Secretary Clinton, I want to start with you. Plenty of politicians evolve on issues, but even some Democrats believe you change your positions based on political expediency. You were against same-sex marriage. Now, you're for it. You defended President Obama's immigration policies. Now, you say they're too harsh. You supported his trade deal dozens of times. You even called it the ‘gold standard’. Now, suddenly, last week, you're against it. Will you say anything to get elected?”

Clinton: “Well, actually, I have been very consistent. Over the course of my entire life, I have always fought for the same values and principles, but, like most human beings—including those of us who run for office—I do absorb new information. I do look at what's happening in the world. You know, take the trade deal. I did say, when I was secretary of state, three years ago, that I hoped it would be the gold standard. It was just finally negotiated last week, and in looking at it, it didn't meet my standards. My standards for more new, good jobs for Americans, for raising wages for Americans.”

Cooper: “Secretary Clinton, though, with all due respect, the question is really about political expediency. Just in July, New Hampshire, you told the crowd you'd, quote, 'Take a back seat to no one when it comes to progressive values.' Last month in Ohio, you said you plead guilty to, quote, 'Being kind of moderate and center.' Do you change your political identity based on who you're talking to?"

Clinton: “No. I think that, like most people that I know, I have a range of views, but they are rooted in my values and my experience. And I don't take a back seat to anyone when it comes to progressive experience and progressive commitment.”

Cooper: “Senator Sanders. A Gallup poll says half the country would not put a socialist in the White House. You call yourself a democratic socialist. How can any kind of socialist win a general election in the United States?”

Sanders: “Well, we're gonna win because first, we're gonna explain what democratic socialism is. And what democratic socialism is about is saying that it is immoral and wrong that the top one-tenth of the one percent in this country own almost 90 percent—almost—own almost as much wealth as the bottom 90 percent. That it is wrong, today, in a rigged economy, that 57 percent of all new income is going to the top one percent. That when you look around the world, you see every other major country providing health care to all people as a right, except the United States. You see every other major country saying to moms that, when you have a baby, we're not gonna separate you from your newborn baby, because we are going to have—we are gonna have medical and family paid leave, like every other country on Earth.Those are some of the principles that I believe in, and I think we should look to countries like Denmark, like Sweden, and Norway, and learn from what they have accomplished for their working people.”

Cooper: “Denmark is a country that has a population—Denmark is a country that has a population of 5.6 million people. The question is really about electability here, and that's what I'm trying to get at. You—the—the Republican attack ad against you in a general election—it writes itself. You supported the Sandinistas in Nicaragua. You honeymooned in the Soviet Union. And just this weekend, you said you're not a capitalist. Doesn’t—doesn't that ad write itself?”

Clinton: “And I think what Senator Sanders is saying certainly makes sense in the terms of the inequality that we have. But we are not Denmark. I love Denmark. We are the United States of America.”

Cooper: “Governor O'Malley, the question from Arthur was do black lives matter, or do all lives matter?”

Former Maryland Governor Martin O’Malley: “Anderson, the point that the Black Lives Matter movement is making is a very, very legitimate and serious point, and that is that as a nation we have undervalued the lives of black lives, people of color. When I ran for Mayor of Baltimore—and we we burying over 350 young men every single year, mostly young, and poor, and black, and I said to our legislature, at the time when I appeared in front of them as a mayor, that if we were burying white, young, poor men in these numbers, we would be marching in the streets and there would be a different reaction. Black lives matter, and we have a lot of work to do to reform our criminal justice system, and to address race relations in our country.”

Sanders: “Let’s remember where we were when Bush left office. We were losing 800,000 jobs a month. And I know my Republican friends seem to have some amnesia on this issue, but the world's financial crisis was on—the world's financial markets system was on the verge of collapse. That's where we were. Are we better off today than we were then? Absolutely. But the truth is that for the 40 years, the great middle class of this country has been disappearing. And in my view, what we need to do is create millions of jobs by rebuilding our crumbling infrastructure; raise the minimum wage to $15 an hour; pay equity for women workers; and our disastrous trade policies, which have cost us millions of jobs; and make every public college and university in this country tuition free.”

Cooper: “Some of the candidates have tried marijuana, as have pretty much—probably everybody in this room.”