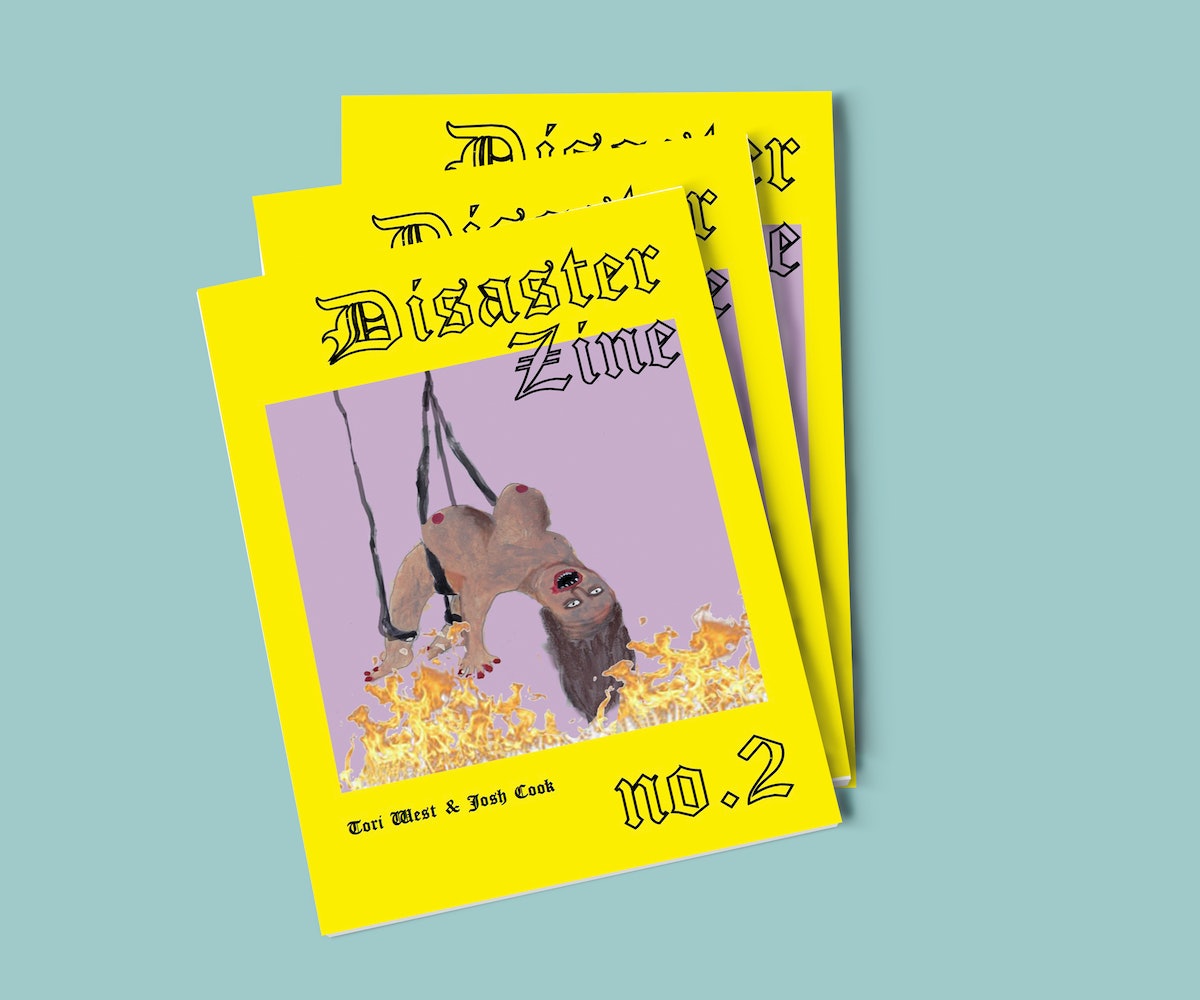 In general, dating is an open invitation to embark on an experience that could turn out to be a complete disaster. Millennials are no strangers to the struggle, especially with all the latest technology acting as a crutch in the journey toward finding love, lust, or even just like. Luckily, great art can be created during times of great despair, and that's exactly what U.K.-based creatives Tori West and Josh Cook have done, combining their talents to turn hookup horror stories into a colorful and comical collection of pages called Disaster Zine.

Last year, the pair released the debut issue, and they're now set to drop an official follow-up next week. While there isn't a particular theme for the second installment of Disaster Zine, West and Cook told us that the woes and disasters portrayed in this issue are more overtly sexual. The inspiration for Cook's provocative illustrations came from nightmares and horror films, which he combined with intimacy and affection.

Learn more about how the concept for Disaster Zine came together and get a glimpse at some exclusive pages of the next issue in the gallery, below. Disaster Zine is available to pre-order before its official release on April 2.

What types of responses did you get when you released the first issue of Disaster Zine?Tori West: They varied; some of my exes weren’t too happy, some laughed it off. My favorite [responses], though, [came from] working zine fairs, watching old ladies flick through it and being absolutely horrified. Then young girls would come over and laugh through the whole issue. It’s really weird watching strangers laugh at all your secrets in front of you. I guess it’s like the same cringe-y feeling you get when someone reads your teen diary, 'cause you don’t know how they will react. My ex-boyfriend's mom bought one; luckily she lives in Canada, so I don’t know what her reaction was.Josh Cook: I think most people found it funny. Considering how outrageous some of the content was, we still managed to get some positive feedback. I think the worse thing that happened was Tori’s dad asked us what a chode was.

Have your dating lives changed since starting this zine?TW: I didn’t think my dating life could have possibly gotten any worse because of it, but it did. After writing the first issue, we got interviewed by Dazed, and my ex-boyfriend found it online and went mental. He thought I’d written this entire book about how shit our relationship was, which was obviously not the case. We ended up getting back together because of it, and he moved to London with me. It obviously didn’t last, and we broke up two months later. I was then in this new city by myself, trying to date again without knowing anyone. But after being here for a year, I now think London is the city where dreams and love actually go to die. Everything is so expensive, people only live here to work and make money, and no one actually gives a shit about anyone else because they’re so busy. That’s what inspired this second issue. It’s probably a lot darker than the first because I felt really isolated at the time of writing it. The stories focus more on mistrust, selfishness, and how I wish people would just treat each other a bit better.

How was your creative approach for the second issue different?JC: I think the first issue was more naïve and playful—there was this sense of innocence in the stories. This issue’s humor is a lot darker; I really wanted the images to reflect that. Tori used to live in Bristol with me, so I knew most of the people who the stories were about. Now we live apart, so I can be a bit more imaginative as all the people she tells me about are figurative. I imagined them to be these ghoulish demons with split personalities having a laugh and breaking poor girls' souls in London.

What comes first once you both settle on a situation, the caption or the illustration?JC: Usually Tori would send me a story or a situation, and I’d build the image around how I imagine others would portray the character. Although, she sometimes flicks through my sketchbook and something will remind her of a specific story. The whole thing started like that—Tori joked that this awful character I’d drawn for a uni project looked like someone she’d date.

The cover image is very intense! Can you elaborate on what it means and what made you choose this to represent the new issue?JC: The cover is an illustration from one of the stories that a friend submitted to us. She experienced what she said was “a night of sex in hell.” It seemed like the perfect cover and pretty much summed up the entire issue.TW: I liked it more because she didn’t know about it; we just released the cover, so she didn’t have time to say no. I think it’s perfect; it sums up how I felt throughout writing the zine—not quite as dramatic as being burnt alive on a sex swing, but, you know, being punished in hell for trying to have a bit of fun.

What are some of the disastrous scenarios that you are portraying?TW: I actually don’t even know where to start cause so many weird things have happened. One thing in there is about when I was seeing this guy for a month or so, but he cut me off, then I found out he gave me glandular fever. I was laughing about it on my Instagram story, being like, "This is why you shouldn’t date fuck boys" and showed people my glands. My friend commented back and was like, "So weird, me too, I think this is what I’ve got." Turns out we were both seeing the same guy, and he was such a dick about it afterward. I’m never going out with someone that has Wham! lyrics tattooed on the back of his head ever again.

What do you both hope readers take away from this zine?TW: As human beings, I think the greatest tools we have is the ability to communicate with each other and express ourselves, although growing up, I lost count of how many times I’ve felt ashamed to open up about my feelings toward others or myself. Creating these books really helps me become more honest. I’m hoping that it will inspire people to open up about their own insecurities, feelings, or the things that make them feel shitty.JC: For me, it’s being able to make them laugh or smile because everyone has at least one embarrassing story. We’ve made something personal that connects with people because it’s so relatable. Although I’d like the next one to involve our audience, so we’re going to send a call out for people to write to us so we can play agony aunt.

What would you recommend people when trying to recover from a disastrous relationship? JC: Probably the best thing for me is to talk it out with friends. Tell them all about the embarrassing stories, and laugh about it. If you can't beat them, join them.TW: With Mariah Carey.