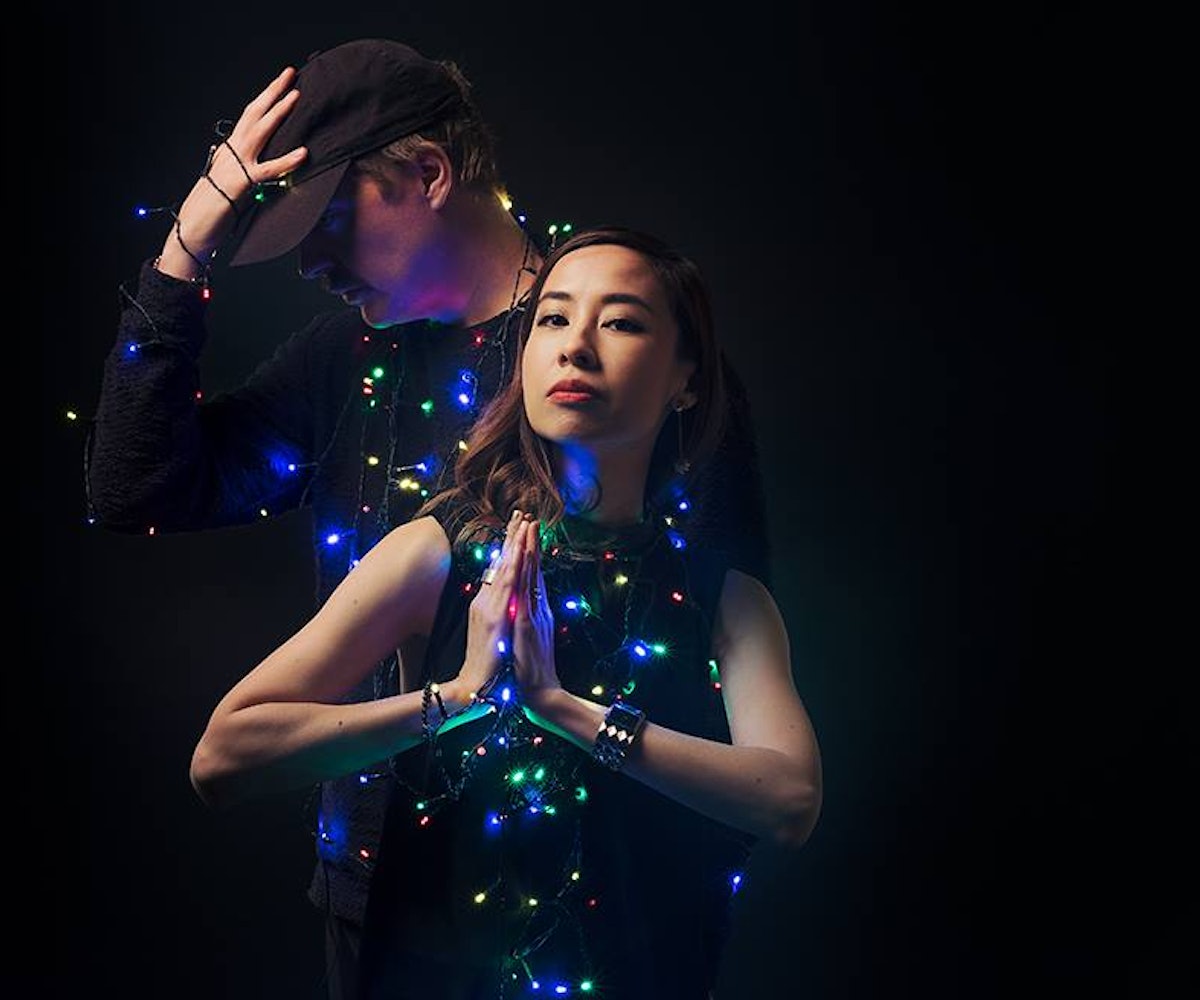 “Show us your biceps J! I want to see the results of your bodybuilding.”

That’s Rose Suau, frontwoman of electro-pop duo Djustin. She leans into the camera from her home in Detroit, egging on her bandmate Johan Angergård (or, as she affectionately calls him, “J”) who’s currently working in his studio in Stockholm, Sweden. He grins and shakes his head at her ribbing, making it clear we’re not going to get a ticket to the gun show tonight.

It doesn’t take spending much time with the pair to realize how close they are. A touch ironic, since even though they’ve been pen pals since their college years, the members of Djustin hadn’t met in person until after recording their self-titled debut EP. “This was back when people actually wrote letters and used pen and paper!” Suau laughs, recalling their first correspondence. “You had to go to the post office and get a stamp. It was a big production to mail it out.” The groundwork was so dense—over the years they found so many common points: middle child status, star signs, and mutual admiration for their separate musical projects (hers: Shoestrings and Invisible Twin; his: Club 8, Legends, and Acid House Kings)—that when they finally met face-to-face, they skipped right over the whole awkward introductory bit.

“It was very natural,” Angergård recalls of their initial in-person hangout in Stockholm, which ended in a photo shoot featuring the two dramatically flopped on the floor of a castle. “As we already knew each other it was nothing strange. If we had never met that would be strange… don’t know what we were thinking before that. I know after that I was absolutely certain we would make a lot more music for a long time.”

To make up for their distance from one another, the pair work by passing vocal and instrumental recordings back and forth, course-correcting each other throughout the process. The resulting songs are bolder, dancier, and—dare one say it—sexier than their previous band endeavors. (“[We are] syncing all our parts,” Suau says with a blush, citing a suggestively saucy lyric from their new single “New Preset,” which we are premiering below.) Together, Djustin has built slick, beat-heavy/club-ready tunes that don't ignore the heavy stuff; the dark side of love, death, and pondering one’s mortality all get a play across the nine tracks of their debut full-length, Voyagers. Ultimately, the album is a fitting tribute to the duo’s worldview, which sits between romantic and pragmatic. Angergård credits the project for forcing him to become a better producer but, according to him, the exercise would be nothing without his collaborator.

“Rose points in a new and better direction for the track,” he notes. “Then it’s heading that direction. When you hear the vocals, you work with that because you want to make the most of it. You want to give the vocals the best possible surroundings. Which is the fun part for me.”

“It’s almost like you’re sending a signal, and I’m trying to pick up on that particular signal,” Suau adds. “The songs will write themselves. If it’s a good song, and I feel it, it happens really quickly. We have a song on the album called ‘Shift.’ I wrote it in 45 minutes. It was very strange! I don’t write like that. I think and overthink… The whole project has really been an awakening for me. I just feel different as a writer. That’s really cool because J helps me get there.”