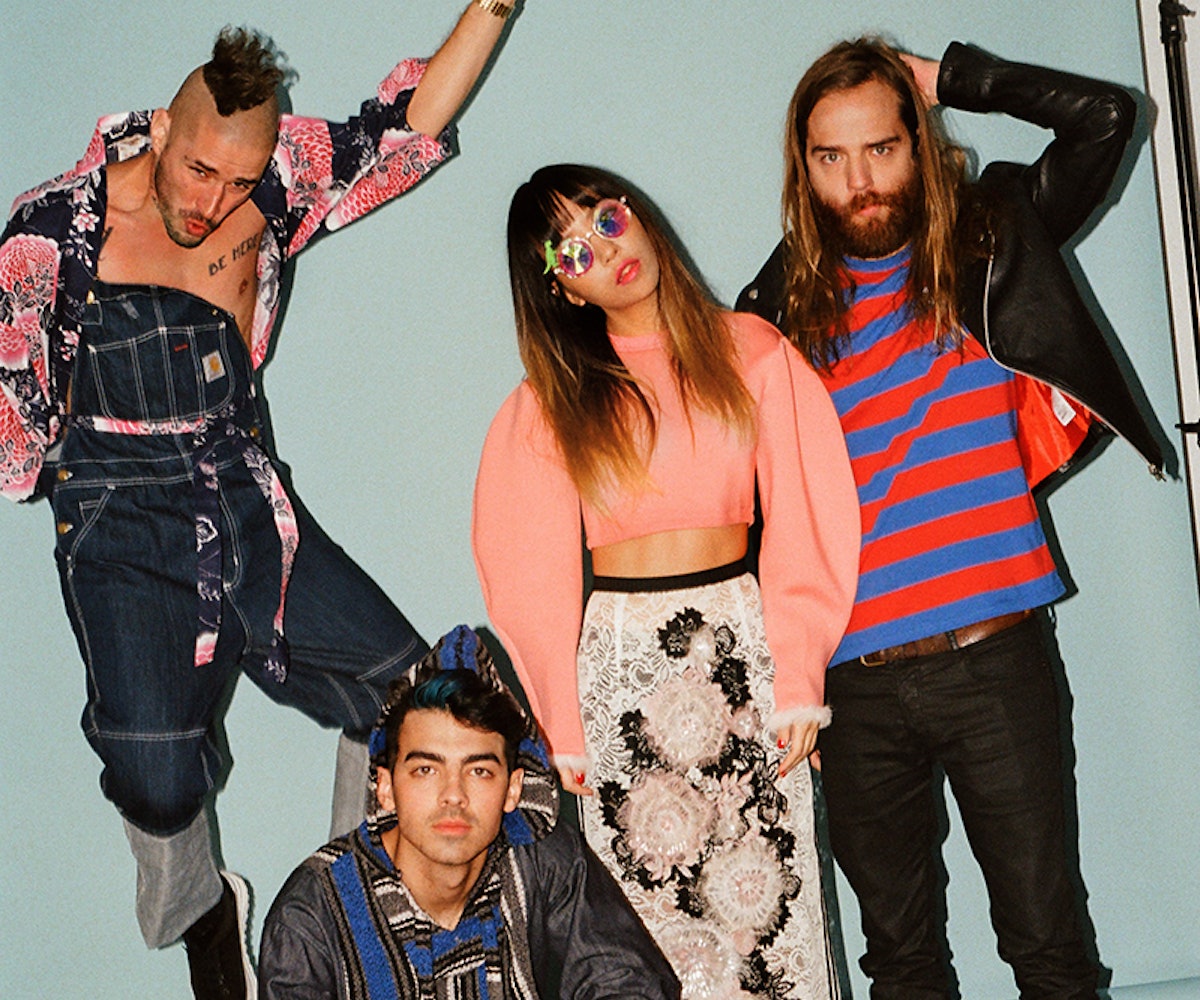 Cardboard cutouts of everyone from Darth Vader to Harry Styles dot the stage at Webster Hall in New York City, along with bright metallic balloons spelling out dnce. Once the pop-rock band hits the stage, the surge of energy in the room is palpable—even before singer Joe Jonas, guitarist JinJoo Lee, bassist-keyboardist Cole Whittle, and drummer Jack Lawless play a single note.

“Our shows are like Animal House, the musical,“ explains Whittle earlier in the day when I meet up with the band at La Esquina in SoHo. Dressed in a long denim coat and a matching button-down jean onesie, Whittle’s daring ensemble makes him stand out, even among the taqueria’s usual sceney lunch crowd. Lee is sleek-with-an-edge in black overalls and a black tee, while Lawless has the rock drummer look down with his long blond hair and black leather jacket. Jonas, meanwhile, oozes the quiet confidence of a superstar.

Over lunch, they share their pre-show ritual: First, the group warms up by belting out Green Day and Weezer songs, then they gather for a quick huddle. Next, it’s workout time: push-ups and a little shadowboxing, all to the tune of a house song that samples Arnold Schwarzenegger saying, “Down, up, more energy.“ As for those cardboard cutouts, they’re piled up in a corner, purloined from countless radio station visits and in-store performances, they tell me.

The reason for the exuberant warm-up? DNCE are always ready to party, hence their name. "We wrote a song about being too drunk to spell dance,“ explains Jonas. The Prince-inspired tune, off of their recent EP Swaay, always kicks off their sets. “DNCE is dance without an A, which is not a perfect word, but you also don’t have to be a perfect dancer to dance,“ says Lee. “Life is never perfect, but you can still enjoy it.“

You get the sense DNCE do enjoy life very much. That energy is captured in their single “Cake by the Ocean,“ which Jonas says “embodies the whole EP.“ The quirky title came about when he overheard a couple of Swedish producers talking about the cocktail Sex on the Beach. “They kept calling it Cake by the Ocean,“ says Whittle, laughing. “Joe has funny-shit-alarm radar all over him, so he grabbed that and we just wrote this wacky world around it.“ The video, directed by none other than model Gigi Hadid, who also happened to be dating Jonas at the time, features a crowd—including Internet celeb The Fat Jew—frolicking on the beach.

The pop song perfectly sums up the varied backgrounds of the members. As the former bassist of Semi Precious Weapons, Whittle spent two years opening for Lady Gaga on her Monster Ball tour. Lawless drummed for the Jonas Brothers, as well as Night Terrors of 1927 and Soft Swells. And Lee got her start playing in a band with her family. She picked up a guitar at age 12 in hopes that her four siblings would let her join; after practicing for “27 hours a day“ it worked. Later, she landed gigs as a touring musician with Jordin Sparks, CeeLo Green, and Charli XCX. And we all know where Jonas got his start.

But make no mistake—this isn’t a rehash of the Jonas Brothers, in case the blue streak in the singer’s hair doesn’t give that away. The songs are undeniably poppy, but they also incorporate twinges of funk, disco, pop, R&B, rock, and even hip-hop. So it’s no surprise when the band cites a wide swath of influences including James Brown, Jimi Hendrix, Hall & Oates, the Bee Gees, the Beatles, Red Hot Chili Peppers, and Radiohead.

While the band may be new, Jonas had a notion to form this kind of group ever since he and Lawless began experimenting on a few side projects years ago. Then the Jonas Brothers split, and each brother began persuing his own projects. “My life shifted,“ says Jonas. “I was taking time to figure out if music is what I wanted to do.“ The answer was yes, of course, and once he started working with producers and songwriters, the new band came together quickly. He called up the other three members, whom he had met on the road or through friends, and asked them to join. “I was like, ’Are you cool with doing this for the rest of your life?’“ recalls Jonas. “For a lot of musicians that walk into a new band, it’s a challenge,“ he continues.  “You want to create something that fans of your past can enjoy, but you have to be selfish and say this is music for me and I want to have freedom as an artist. But I’m happy if someone wants to listen to my new music who used to listen to the Jonas Brothers—come along for the ride.“

If being pounced on by three twentysomethings as I leave the restaurant is any indication, Jonas’s fans are likely to follow him anywhere. “Is he done eating yet? I didn’t want to interrupt his lunch, but do you think he’d take a picture with me?“ one devotee asks, phone in hand. With her black suede shorts and over-the-knee boots, she’d easily blend in at the DNCE show later on tonight, but it’s pretty obvious that her intense Jonas jones—much like his new band—has been years in the making.

NEXT UP
Culture
11 Must-Read February 2023 Books
Entertainment
Emma Chamberlain Is Officially Moving to Spotify On February 23 (Exclusive)
Astrology
Your February 2023 Horoscope Is A Breath Of Fresh Air
Culture
Phoebe Dynevor Will Not Return for Bridgerton Season 3
Style + Culture, delivered straight to your inbox.