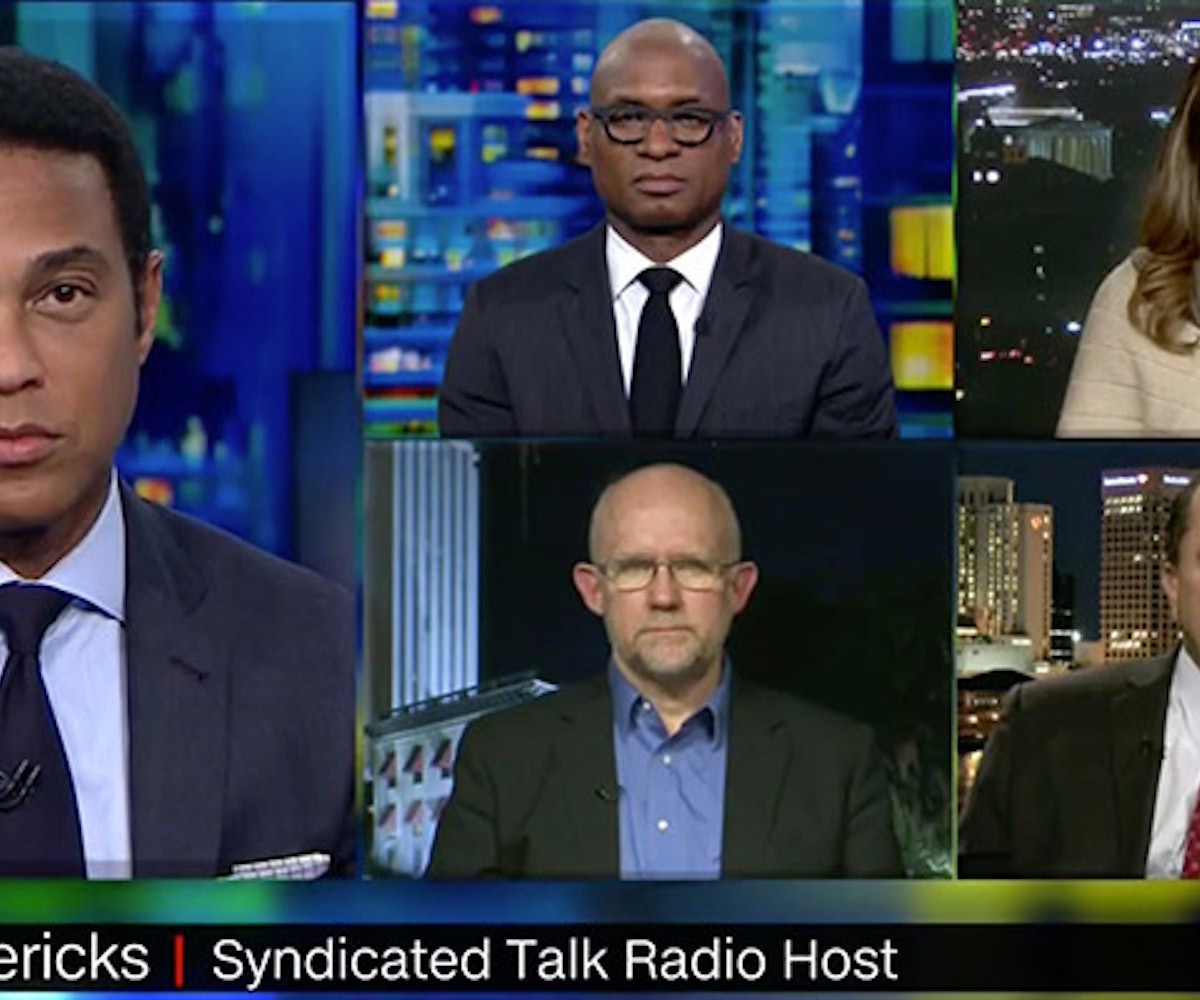 On Thursday night, news anchor Don Lemon opened his show with one sentence: "The president of the United States is racist." He was referring to (more) racist comments Donald Trump made during a meeting with lawmakers, during which he called Haiti, El Salvador, and African countries "shithole countries." Lemon, when speaking to conservative radio host John Fredericks, stated, accurately, that it's these kinds of "racist, xenophobic views" that are some of the most consistent opinions of the president. When Fredericks replied that making it about race was "lazy," Lemon decided he'd had enough.

"Well, Don, it’s not about race as you like to make it,” Fredericks said. “That’s easy and lazy. It’s about economics.” One panelist, Republican political strategist Rick Wilson, audibly gasped.

While Fredericks continued to talk his bullshit, Lemon nodded, telling Wilson, "I'm just giving him his time." But Fredericks' time was up. After he told Lemon, "You called on me, so let me finish," Lemon cut him off and asked that producers take him off the screen.

“Are you going to cut me off?” Fredericks asked. “Yeah, we’re going to cut you off,” Lemon said, and the panelists were removed from the screen.

“First of all," Lemon continued. "I was going to let him speak until you doubly insulted me. I don’t even need to respond to the lazy comment. I laid it all out in the [monologue]. We can have this conversation, and we don’t need someone who’s going to make excuses for racism.”

That's when he turned to New York Times columnist Charles Blow, who explained that this kind of racism is a part of who Trump is and that he's not ashamed of it. "It is impossible to live your life under the microscope of the presidency and not have your true nature revealed," Blow said, "and what we are seeing is [that Trump] continuously over and over reveals the true nature of himself, and what makes me doubly sure that it is who he is is that he has never once apologized for it, he's never repented, he's never asked for absolution, in fact, the exact opposite is true, he's doubled down and defended it."

Fredericks eventually returned to the broadcast, but before he could speak, Lemon demanded an apology. “I’ll be damned if I’m going to let you sit here and insult me,” he said. While Fredericks apologized, he continued to defend the president's racist remarks, saying that "truer words today in the Oval Office have never been said." He added that "this is what people say around their kitchen table."

So basically Fredericks, like Trump, thinks Haiti, El Salvador, and African countries are shitholes and went on national television to defend this view. He also said that all of the people who come to America from these countries are "uneducated and unskilled."

As Blow said, "People who defend this man, who have evidence that he has a hostility toward black and brown people... you are part of that hostility."

You can watch their exchange, below.

NEXT UP
Life
This Company Matches You With Your Dream Coffee & Delivers It To Your Door
Life
The Supreme Court Overturned Roe V. Wade — Here's What You Can Do
Life
June 2022’s New Moon In Cancer Is A Soft Reset
Life
aespa’s “Life’s Too Short” Video Is A Blissed Out Slumber Party