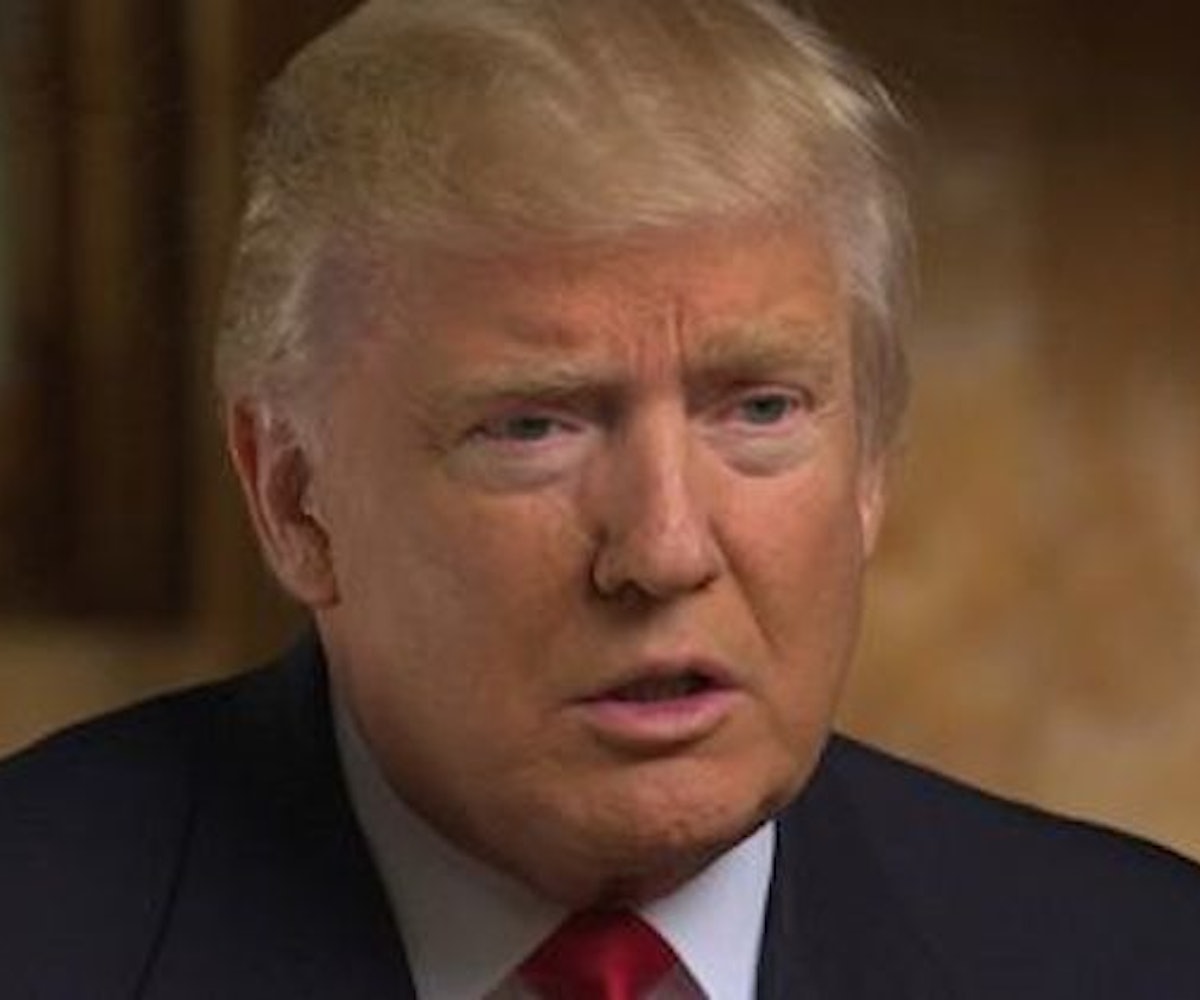 Now that the reality of a President Donald Trump has started to sink in, many of us are left wondering if he’ll stick to the same inflammatory that defined his campaign, or if all the horrible things he said and did over the past year were merely posturing and rhetoric as some people would like to believe. (Others insist that the first thing to remember about living in an autocracy is that you should always "believe the autocrat.") On Sunday, President Trump came into sharper focus, when he sat down with Lesley Stahl on 60 Minutes for his first interview since winning the election. Here’s what Trump said:

Gay marriage is safe. Trump said he won’t push to have the law repealed because it’s already been settled in the Supreme Court and he’s “fine with that.”

Your right to get an abortion is not. Trump plans on nominating federal judges who are anti-abortion, meaning that if Roe v. Wade is in fact overturned, the matter would be one of individual state law, meaning a woman living in a state where abortion is illegal would “have to go to another state” in order to have the procedure done.

He will not prosecute Hillary Clinton... for now. It appears that Trump’s promise to appoint a special prosecutor to throw Hillary Clinton in jail was just a campaign device. “I’m gonna think about it,” he told Stahl. “I want to focus on jobs. I want to focus on health care.” He reiterated that while Clinton “did some bad things,” he “doesn’t want to hurt [the Clintons],” because “they’re good people.”

He’s going to deport millions of immigrants. Once he secures the border with what he said will be more like a fence than a wall, Trump plans on deporting immigrants “that are criminal and have criminal records—gang members, drug dealers.” He’ll then turn his attention to undocumented immigrants who he called “terrific people.”

He really, really loves Twitter. Trump plans on being more “restrained” on Twitter while in the White House but credits the social media platform for his win. “It’s a great form of communication,” he said. “I think it helped me win all these races where they spent much more money than I did. I think social media has more power than the money they spent.”

He’d be okay with getting rid of the electoral college. Despite losing the popular vote, Trump said that he would go along with updating the archaic voting system that ended up handing him the election. “I would rather see it where you went with simple votes,” he said. “You know, you got 100 million votes, someone else gets 90 million votes,” adding that “there’s a reason for doing this, because it brings all the states into play. And there’s something very good about that. I do respect the system.”

He likes Barack Obama. Despite the ugly assaults he hurled Obama’s way throughout much of his campaign and the fact that he basically tried to discredit his presidency, Trump seems to have taken to the President over the course of their 90-minute meeting last week. “I found him to be terrific. I found him to be very smart and very nice. Great sense of humor.”