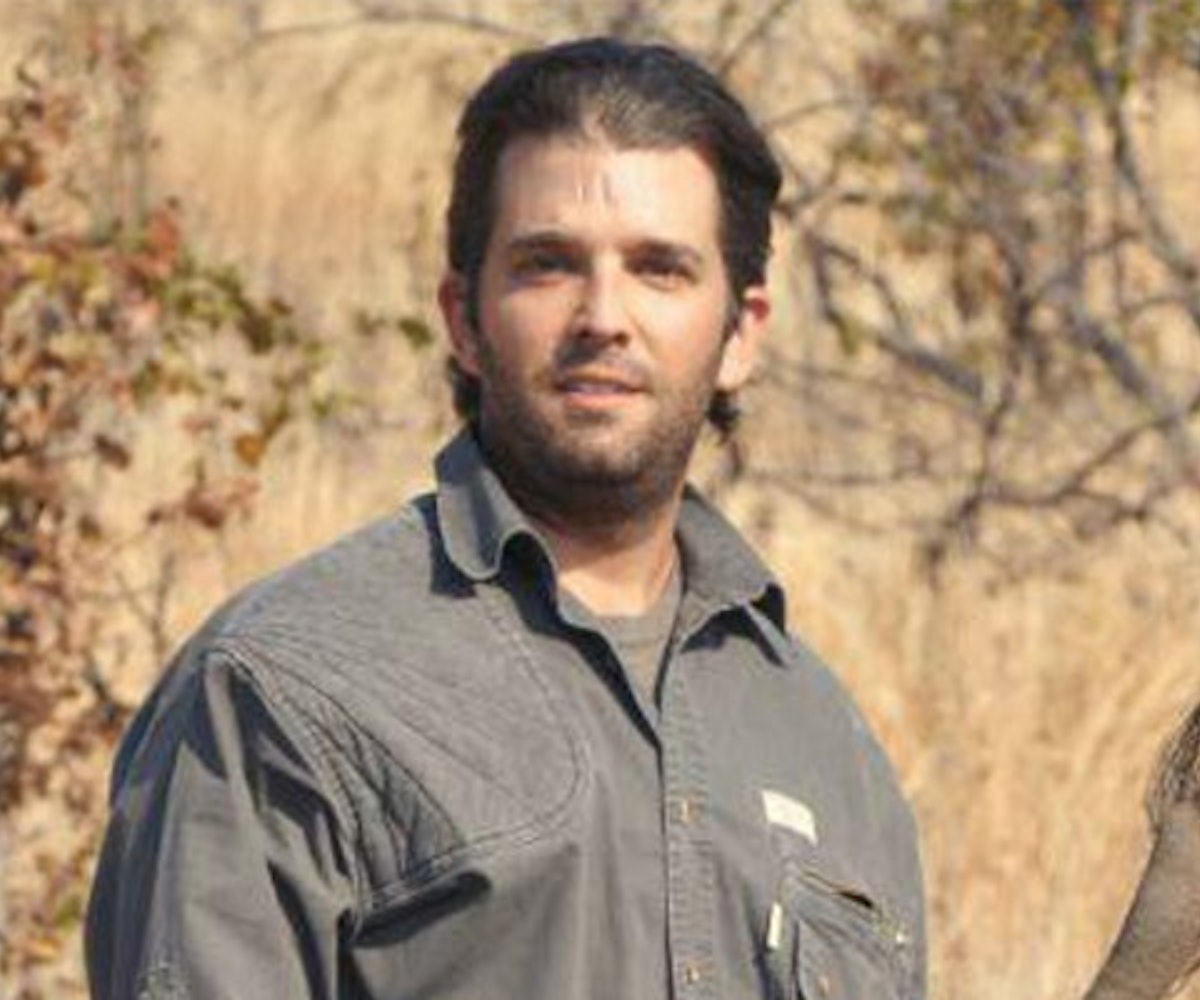 Despite having much more pressing issues to deal with, like cutting taxes for the rich, defending the sexual abuse allegations against Senate candidate Roy Moore, and taking internet away from the poor, the Trump administration is also considering lifting a 2014 ban that prevents hunters from brining "trophy" elephants into the United States from Zimbabwe. This is another move by that admin that serves only the rich and soulless.

Trump's sons are known to hunt "exotic" game. In photos that have been widely circulated on the internet, Donald Jr. and Eric pose with the carcass of a leopard, and in front of a crocodile hanging from a noose. Don Jr. grins while holding a knife and the sawed-off tail of an elephant he's just killed.

While African elephants are protected under the Endangered Species Act, hunters will now be able to import their "trophies" if the U.S. Fish and Wildlife Service finds that the way in which the animals were killed contributes to the species' survival. Trophies include things likes tusks, tails, and other body parts. This was previously banned under the Obama administration because there wasn't enough data on conservation efforts in Zimbabwe, according to the New York Times.

The U.S. agency now attests that certain hunts can be beneficial for the species by bringing money to local communities. “Since our 2014 and 2015 findings, there are strong indications that the efforts of private landowners and consortiums to manage elephants within their areas of control have received greater support,” the federal agency said in a statement.

It added that the Zimbabwean government was working to combat poaching and improving elephant management. The agency also recently decided to allow imported elephant "trophies" from Zambia, as well. Hunters are allowed two imports per year in each country.

Between 2007 and 2014, the African elephant population decreased by about 30 percent, according to the Great Elephant Census. And while the admin claims the money from big-game hunting is vital to local communities, some conservationists believe the elephants are worth much more alive than dead.

"One African bull elephant over the span of its lifetime is worth more than $1.6 million in tourism fees," wildlife expert Michelle Garforth told CNN. "When people see these elephants they generally feel great awe."

Fortunately, the Trump administration might be rolling back this decision. They've decided to put it on hold "until such time as I review all conservation facts," Trump tweeted. "Under study for years. Will update soon with Secretary Zinke."

The U.S. Secretary of the Interior later said he and the president had discussed the issue and "both believe that conservation and healthy herds are critical." He added that no permits will be issued while the decision is under review.

"We need to keep this ban in place," Garforth said. "We need as many obstacles as possible to keep people from murdering our wildlife."