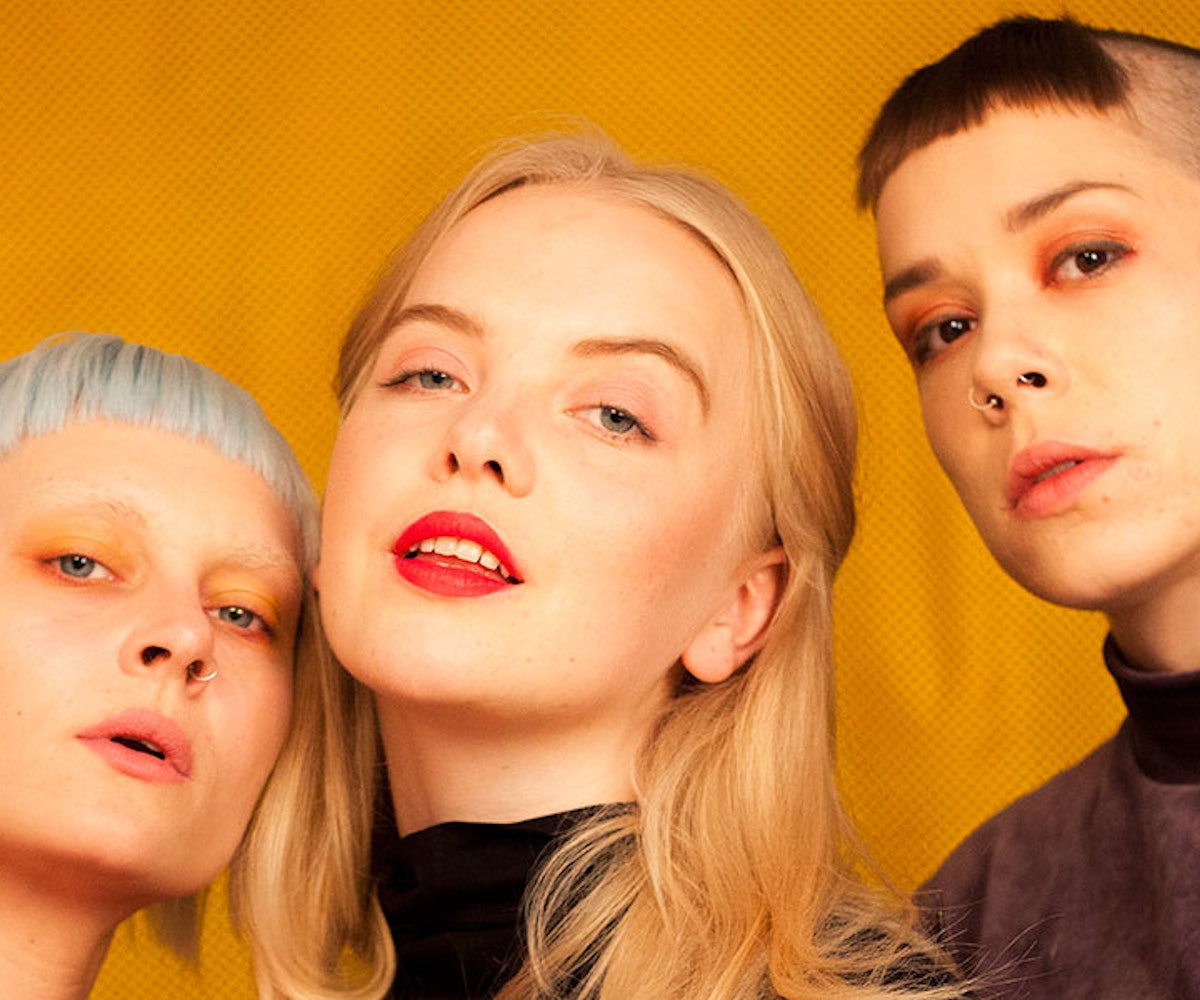 Don't you dare judge Dream Wife by their appearance. They're rock stars, through and through. "It freaks people out a little," Alice Go, the band's guitarist, says with a laugh. "No one knows what to make of us at first, like who are these girls screaming and singing right now?" It doesn't take long for their spell to work its magic, though. Dream Wife is the real deal, and their self-titled debut album is a slice of sweaty, live show heaven.

And it's live where Rakel Mjöll, Go, and Bella Podpadec thrive. Dream Wife is a live band before anything else. "What you have to understand is that a recording is just a snapshot of a song," Podpadec says. "They represent that one particular moment in time, but they're going to change." "It's always an ongoing conversation between ourselves and the fans, and between us and the music," Go adds. "We actually changed some lyrics to a song last night."

It's too easy these days to forget the tangible quality of music and the physical release it can inspire. Take their song "Let's Make Out," a rambunctious piece of punk rock that has Mjöll screaming to some cutie at a venue to, yes, make out. "You know that moment when you're talking to someone, and you don't realize that you're getting closer and closer together until you're just here and they're there, and you're like, 'Well, we might as well...?'" she says. Oh yes, Dream Wife. I do.

"We always say we take what we do really seriously but we don't take ourselves really seriously," Go says. It's that attitude that makes Dream Wife so addictive. They write songs that, in a way, empower the listener to free themselves but deliver them in a way that would make the Yeah Yeah Yeahs circa Fever to Tell proud. (That album just so happens to have played a major influence in the mixing of Dream Wife.) They're a band whose sound demands you shake, rattle, and roll with them. They don't just sing "Let's be kids and fall in love" on "Love Without Reason" to be sweet; they sing it because they mean it, because they know lyrics like that, when performed with their particular edge, can inspire their audience to let go and be in the moment. It's neither preachy nor trite. It's a simple call to free yourself and open up to whatever the night may have in store for you.

For Dream Wife's world is a safe space. "It's really cool to see all these girls and boys, these older rocker guys, and maybe a father and daughter all getting into it in the crowd," Go says. "You can't define a Dream Wife crowd because everyone is there, aware, and looking out for one another." And why shouldn't it be? If their music is, as Go says, about "reclaiming your identity for yourself on your own terms," then why not foster a space to do so?

"Our song 'Somebody' speaks to the larger conversation around identity," Mjöll says. It's a song born from Reykjavík's 2016 Slut Walk, whose lyric "I am not my body / I am somebody" has become an anthem of sorts. Playing it live, the band says, has opened the door for their audience to be angry and be in solidarity, whether that's with the #MeToo movement or in destroying the gender binary. "Male, female, I'm somebody," Mjöll says. "There's empowerment to be found in that shared frustration of figuring out who you are and what defines you."

The moxie Dream Wife exudes is contagious. Their energy is something to feed off of, to turn your life way up and figure out what it means to act your age on your own terms. If that's intimidating, well, jump at that. Dream Wife isn't lying when they say, "Meet me by the bridge/ I'll show you how to live."