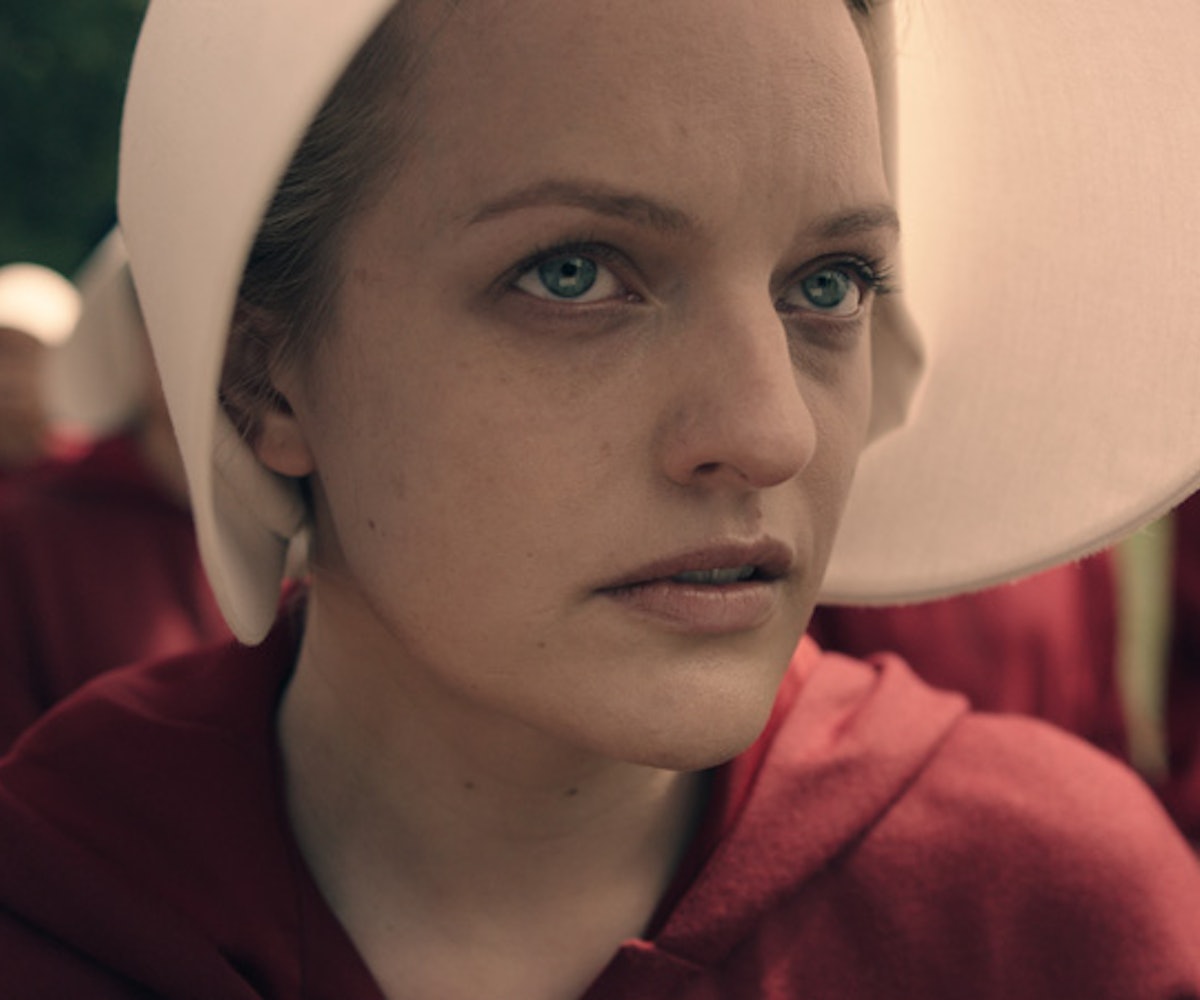 When the top brass at Hulu greenlit an adaptation of Margaret Atwood’s dystopian novel, The Handmaid’s Tale, they, like most of the world, had no idea that Donald Trump would become the next president of the United States. Certainly, its star, Elisabeth Moss, didn't when she signed on to play Offred, a member of the Handmaids, an enslaved group of fertile women forced to bear children for elite, barren couples after the fall of the United States at the hands of a new government known as Gilead. But as the cast and crew were shooting the eight-episode season, which premieres on Hulu on April 26, Trump pulled off his unthinkable victory and suddenly the story they were telling—about a totalitarian government that takes control of women’s reproductive rights—felt way too real. “It’s a very unique experience, to start filming this thing that you really believe in, and then to start believing in it even more and in a stronger way as you continue filming,” Moss told us when we visited the set earlier this year.

And indeed, it will be hard for anyone to watch The Handmaid’s Tale without seeing flashes of the alternate reality we now find ourselves in. The first 75 days of Trump’s presidency had often seemed unreal, as though they were stripped from the pages of a spy novel, or more often, a work of dystopian fiction. Philip Roth’s 2004 novel The Plot Against America imagined what the country would be like if a fascist Charles Lindbergh became president in 1940, and dangerous anti-Semitism and xenophobia spread across the country, from its cities into the heartland. In real life, Lindbergh was the most prominent member of the isolationist America First Committee, preaching that the U.S. had no place meddling in world affairs and resisting American involvement in World War II. It feels strange now to think that there was such resistance in the U.S. about a war which most people now agree was necessary to fight, but, in fact, this type of isolationism was a common sentiment at the time. And for readers of The Plot Against America, it’s hard not to be reminded of Trump’s ominous inauguration speech, when he told the nation that “from this moment on, it's going to be America First,” a creed that eerily echoes Lindbergh’s own view. The book feels so prescient today that Jacob Weisberg, the founder of Slate and host of the popular podcast Trump cast, devoted an entire episode to what it can tell us about today.

When Kellyanne Conway made her infamous appearance on Meet the Press and told host Chuck Todd that the Trump administration had “alternative facts” regarding the size of his inauguration crowd, many drew parallels to George Orwell’s dystopian classic 1984 and its form of doublespeak, where “war is peace, freedom is slavery, ignorance is strength.” According to Amazon, sales of the book soared 10,000 percent in the wake of Conway’s comments, almost as if people have to ask themselves, It can’t be that bad, can it?

And it’s true. Saying the Trump administration is akin to some of the worst totalitarian governments in dystopian fiction—like the triumphant Nazis in Philip K. Dick’s The Man in the High Castle—is a disingenuous exaggeration. Protesting against this government isn’t life-threatening, and that’s a crucial distinction to make. But diving into fictional works that paint bleak pictures at times like this is a way to resist the urge toward escapism and acts more like a confrontation, a way of digging in for the fight ahead. Children of Men, Alfonso Cuaron’s 2006 classic that imagines a near-future where women stopped giving birth and evokes images of refugees seeking sanctuary in the U.K. and a government taking ruthless measures to contain them, has also found new life. Vulture’s Abraham Riesman wrote a lengthy reassessment of it, asking if it was the year’s most relevant film. “The gap between our world and that of Children of Men is closing rapidly,” he wrote.

At the center of these stories is some kind of resistance, whether it is one man, like Clive Owen in Children of Men, or a group of women as in The Handmaid’s Tale. And ultimately, these stories are ones of hope. “If you are in a situation where things are terrible and you feel powerless, like you can’t do anything, you can look at Offred and say, 'Well, if she’s doing something, I can get off my ass and do something, too’” Bruce Miller, the showrunner for The Handmaid’s Tale told us. Added Moss:

She’s not saying, "This is just going to be my life, and I’m not going to fight back." I think that something very beautiful that has come out of all these recent events in our country, is this resistance, this hope, this will to fight back. And that is what Offred has. And I think people can connect to that. I certainly did.

NEXT UP
Culture
Succession Season 4 Trailer Explodes With Family Drama
Culture
The Biggest Revelations From The Price Of Glee Docuseries
Culture
6 Shows To Binge Once You've Finished 'The White Lotus'
culture
Anna Delvey Is Getting A Reality TV Show
Style + Culture, delivered straight to your inbox.