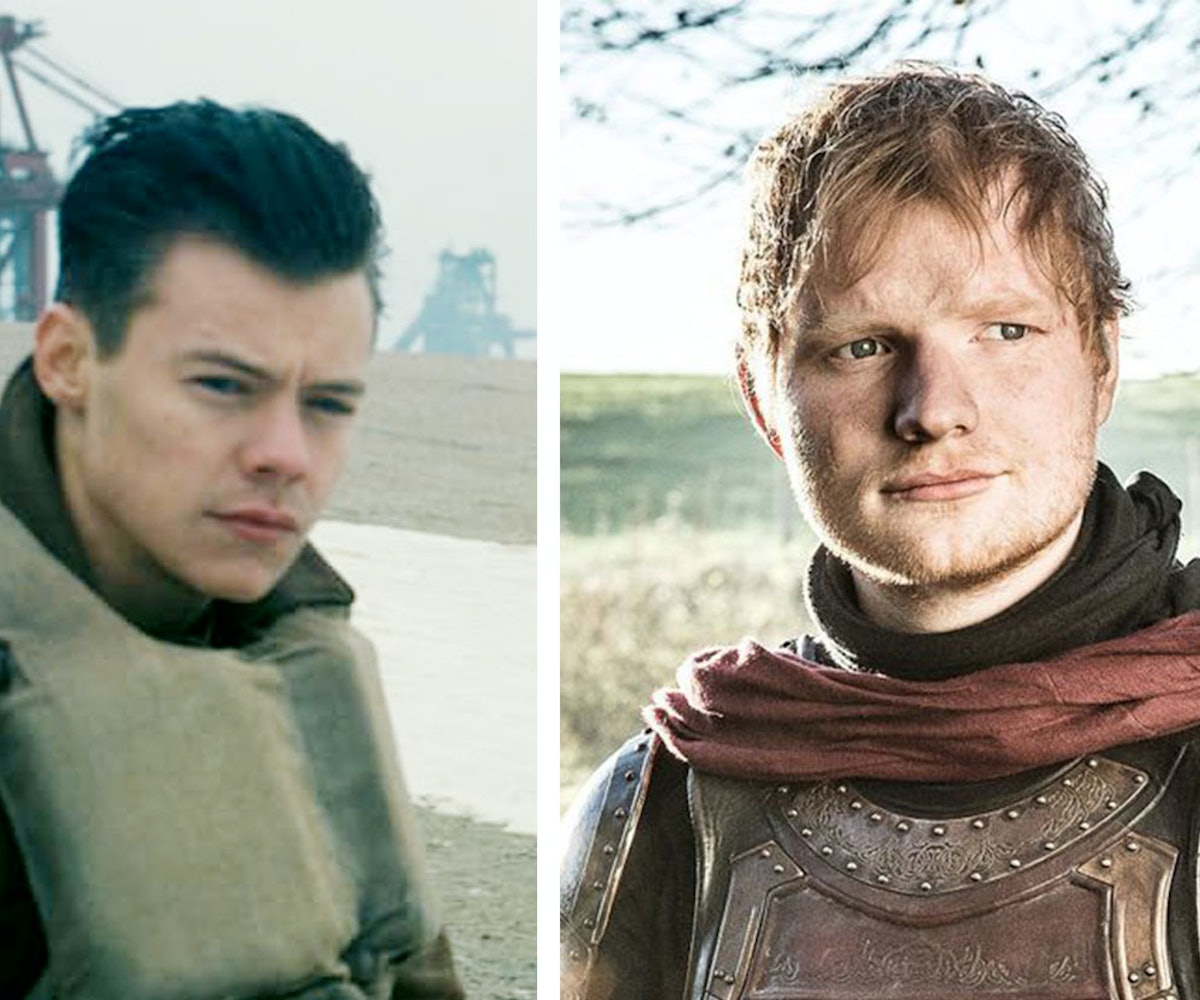 For a fleeting moment this week, Ed Sheeran responded to criticism over his Game of Thrones cameo by deleting Twitter altogether. It's understandable, considering his cable TV debut wasn’t exactly well received. Fans of the show condemned the obviousness of the appearance, with Sheeran’s cameo seeming like a classic case of stunt casting.

But it worked: Days later, and we’re still talking about the singer’s turn as a singing soldier on the HBO series. The thing is, with so much backlash against Sheeran for appearing on Game of Thrones, why is Harry Styles’ appearance in Dunkirk being hailed by critics? Stunt casting is stunt casting, right?

To start, musicians making the crossover from music to acting isn’t a new thing. Whether looking at triple threats like Debbie Reynolds and Judy Garland or Oscar winners like Barbra Streisand and Cher, the legacy of artists spanning both creative realms is stacked. And it's a modern phenomenon too, lest we forget that Lady Gaga won a Golden Globe for her turn in American Horror Story or that Common’s filmography boasts roles in Selma, Girls Trip, and John Wick 2. (And may we take to the streets over Mandy Moore’s Emmy snub this year.) So it’s simple: For a musician to limit themselves to one sect of artistry doesn’t make sense, provided they invest as much in that realm of their career as they did into music.

That’s the issue with stunt casting. Where Christopher Nolan revealed recently that  Styles was put through an arduous audition process that rightfully earned him a spot in Dunkirk (plus, Nolan claims not to have known who Styles was when he was cast), Sheeran was plopped into Westeros because he could be. And where members of Snow Patrol, Coldplay, and Sigur Ros have also shown up in cameos on the show, you’d be hard-pressed to pick them out of a scene unless you were a super-fan. Ultimately, the obviousness of Sheeran distracted from the story. And it suddenly became very clear that the showrunners were okay with prioritizing celebrity over storytelling, if just for that one scene.

Because stunt casting is not about storytelling, it is about using a name to drum up attention for a particular production. It is Taylor Swift in Valentine’s Day, appearing alongside then-boyfriend Taylor Lautner and playing high school versions of themselves. It is Kate Upton in 2014’s The Other Woman, given no character depth outside of generic monikers like “conventionally beautiful” and “actually quite nice.” It is David Beckham in this year’s King Arthur, appearing only to deliver a few forgettable lines in a bad Cockney accent. It is Donald Trump in Home Alone 2, ruining everything. Even our childhoods.

And where a cameo can make sense (like Stan Lee’s appearances in all of Marvel films) or add to the over-the-top nature of an entire premise (like Justin Bieber or Katy Perry in Zoolander 2), stunt casting does neither. It doesn’t move the plot along or act as an Easter egg, rewarding diligent viewers. It just reminds fans and viewers that celebrity is a currency with which some showrunners and directors choose to interact.

Plus, it makes all other crossovers seem like attention grabs, regardless of how hard an artist may have worked to land a role.

Which is what makes Sheeran’s Game of Thrones spot even more surprising. This generation of pop stars (and hell, even models) have been actively circumventing situations in which their latest job can be attributed only to their fame. We’ve watched as Cara Delevingne has carefully selected her onscreen appearances, with this summer’s Valerian and the City of a Thousand Planets (which also boasts Rihanna as part of its cast) already earning modestly positive reviews before its release. And we’ve seen how Rihanna and Lupita Nyong’o helped parlay a meme into a film helmed by Ava DuVernay. We’ve also seen Styles actively keep his music and acting separate, in no way using the Dunkirk press tour as an excuse to talk about his solo debut.

So ultimately, we’ve seen more of a continuation of the same—of musicians and artists-outside-of-film refusing to categorize themselves by their notoriety in a single industry.

But that’s the difference between a crossover and a stunt. Where we’re responsive to artists defining themselves as multi-dimensional by losing themselves in particular roles, Sheeran’s Game of Thrones cameo was far from that. He simply played himself, with his persona contrasting the world he transplanted himself into. And real actors make an attempt to avoid jarring viewers out of the moment. A stunt? It takes pride in it.