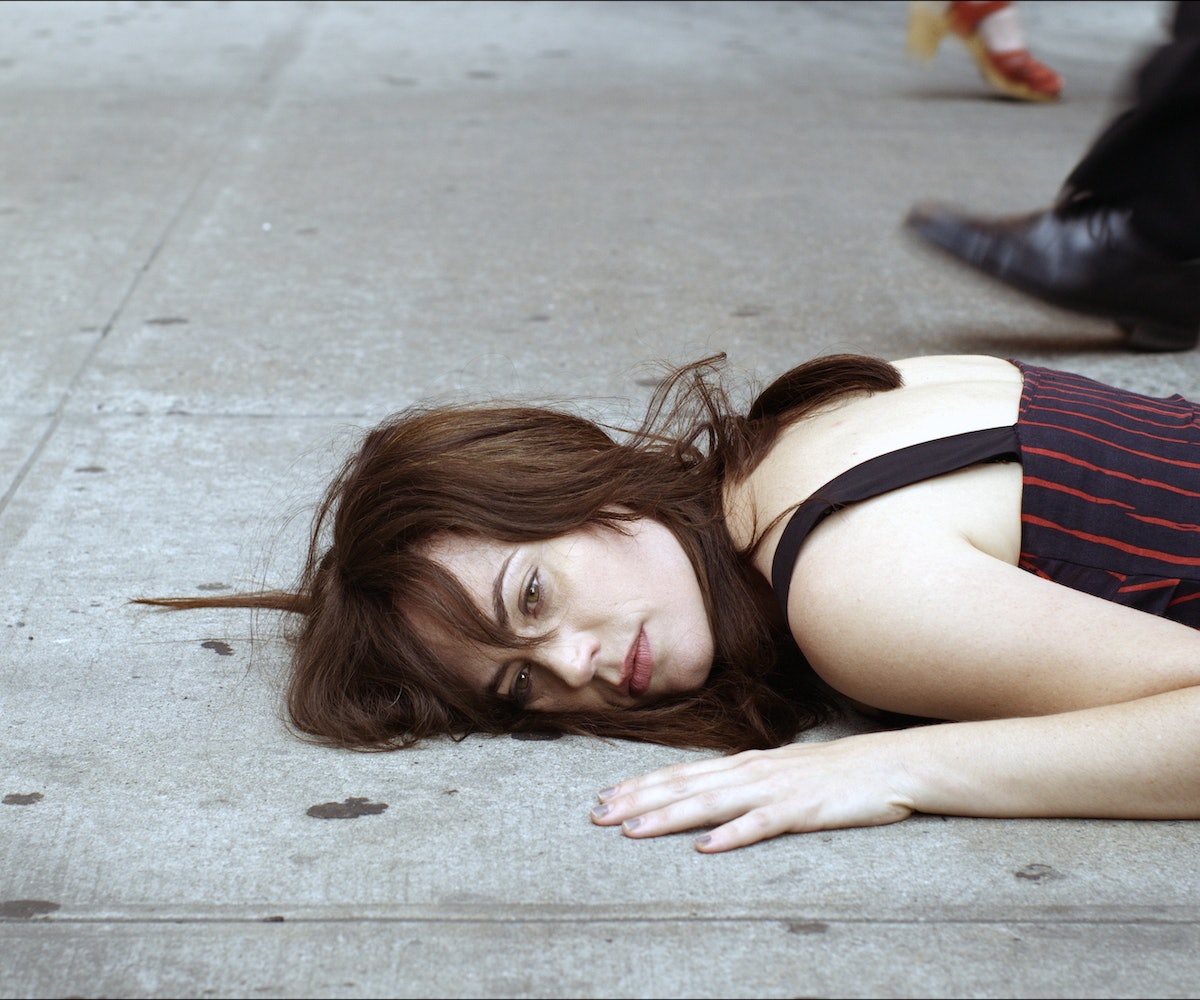 From start to finish, Elisabeth Subrin’s new feature, A Woman, A Part, is a feminist film. Having had its North American debut at Brooklyn Academy of Music’s Cinemafest in New York on Sunday, the film follows 44-year-old actress Anna Baskin (Maggie Siff) as she, splintering under the stress and alienation that comes with Hollywood’s reductive and misogynistic plotlines, takes a hiatus from her television show to return to New York and, in turn, to herself.

The narrative itself is not radical: A woman confronts crisis of identity and seeks out the people—Kate (Cara Seymour) and Isaac (John Ortiz)—and place where she started. The film’s power lies instead in its empathy and voyeurism toward its deliberately flawed characters. Subrin—whose experimental work has always explored women’s subjectivity and systems of power—brings the viewer as close as the eye can go. We see Anna prostrate at her acupuncturist or lying on her floor, phone to ear, listening to Isaac and his daughter; we see Kate in AA as she confronts her friendship with Anna. Subrin pushes in, making each of them unabashedly human.

Below, Subrin talks radical feminism, her transition from video art to feature films, and how actresses represent women.

Coming from a video art background, what was hard, or easy, about taking on a feature film? In what ways did you feel limited or free?

I always had characters performing in my experimental work, so I was already interested in acting and working with performers. But screenwriting was something that I had never done. I didn’t go to film school, I went to art school. I think that, at first, I was a little dismissive of the form. And as I started to learn how to write a screenplay, I was so humbled by how brilliant screenwriting is. You’re layering ideas simultaneously across so many forms: you’re thinking about the words, the characters, how much exposition you can pack in. At the same time, I find screenwriting really torturous. I don’t enjoy it. And it was a really complicated script to write. It’s a personal film. Also, most first-time directors tend to focus on a single protagonist, but I really wanted Anna’s two friends to have just as rich of a life.

I’m fascinated with the politics surrounding the production of this film. As the writer and director, what did you fight for? What were the challenges you faced as a female director working with male producers?

I was super lucky with my producers. Scott Macaulay is one of the most beloved producers and writers in the industry. I’ve worked with him for over a decade—we made a short together with Cara Seymour called The Caretakers, and we tried to make this other film, Up, through the Sundance Labs. Scott is brilliant and incredibly supportive. He read every single draft of the script. He never said anything about what I could and couldn’t do. And Shrihari [Sathe] came in right when we went into pre-production. He had produced Eliza Hittman’s film It Felt Like Love, and I knew from that that he understood work from a female perspective. In terms of casting and crewing, I had no pressure about the cast. For my short film, people asked me if I would consider changing the protagonist to a man, but for this, there were no questions about it or about the characters’ ages. For the crew, I interviewed everyone before hiring, which I hadn’t done on my short. I asked each person, “What is the film about and why do you want to make it?” A lot of them were surprised by my question. The assistant director said, “Because this is a movie I’d actually like to see.” Others, including men, said that they could relate to the themes.  Anyone who couldn’t talk about it, I didn’t want to work with.

Do you think anything has changed between filming your short and your feature in terms of there being a larger appeal for a female protagonist in her forties?

No, the reason we were able to do this is because we were such a low-budget film, financed in chunks of micro-investments. The mainstream [studios] all turned it down.

So you still feel on the margin?

Totally. And some of that is my choice, in making a woman’s story about complex psychological states. The industry is as sexist as it was when I made The Caretakers. Maybe in the last six months the [gender] conversation has hit a tipping point, and for the first time ever, I am hearing showrunners, producers, and studios starting to say things like, “We are taking initiatives, I’m going to change my writers’ room.” Still.... we’ll wait and see.

Did the stakes feel higher for you as a female director?

Again, because this was a teeny budget film, I felt amazing support on set. For my short, there were men I should have fired. Both films were shot several months sooner than they were supposed to. During A Woman, A Part, Maggie’s pilot got picked up, so we were in pre-production while we were shooting it. I have never done something more stressful and where the stakes felt higher because so many people were there to support me, and I felt that anything that went wrong was my fault. On the other hand, in the middle of it, sleeping only four hours a night, I kept thinking, I can’t believe how hard this is and how I want to do it again.

Indie film is the stupidest thing. You work incredibly hard, people get so underpaid, and you can’t make money. At a certain point, the art world is more supportive of moving image work. Years ago, I told Todd Haynes that I was writing a screenplay, and he was a big supporter of my short and my experimental work, and he just looked at me with the saddest eyes and said, “Why do you want to ruin your life?” The avant-garde world is so kind and cozy, but there are certain stories that have to be told with a narrative.

What do you think is the most radical part of this movie? And can radical feminism be quiet and subtle?

When I think of a radical feminist film, I think of one in which both the formal properties of the film and the message are radical. A film like Shulie is more radical formally. For A Woman, A Part, I chose a more conventional form, which felt appropriate to the story. I really wanted to enter Anna’s world in a naturalistic way. I also didn’t want the formal properties of the film to be pushed to the front, where people would pay more attention to aggressively experimental cinematography [than the story]. Films like Born in Flames by Lizzie Borden or Jeanne Dielman by Chantal Akerman, you are never not aware that you are watching a film.

When you tell a story about vibrant, creatively engaged, smart women—or men—going through personal crises that reflect a larger political and social context, and you tell it from a feminist perspective that critiques and makes a symbol of the role of an actress, that is radical. And unfortunately, it is so radical that it is illegible to some people. I didn’t want to hammer the obvious into the audience. For instance, when Anna fights with her showrunner, she could have said, “This is a really sexist show, and you’re not representing people.”

When people get it—and every single woman who has come up and talked to me has gotten it—it’s just so obvious. When critics don’t get it, they just describe the plot.

Can you talk about your blog Who Cares About Actresses? How did it come about? What does it mean to you?

I started the blog for two reasons: One, I felt that with other social media, you’re preaching to the converted. I’d put up articles, and my network would already agree with me. I wanted to reach other people. The other was that I had to figure out why in God’s name I’d make a film about a fucking actress. It’s something that dudes do. Actresses are considered super privileged. One friend showed the film to her boyfriend, and he said, “I don’t understand what is wrong with her.” She was like, “Did you notice that [Anna] had an autoimmune disease? Did you notice that she is addicted to Ritalin and is on anti-depressants? Did you notice that she almost drowned in a swimming pool?” And he was like, “What’s the problem?” He couldn’t see beyond her beauty and her privilege of being on-screen. And that is just so insane to me, because culturally we understand who and what women are from actresses.

It is political to make choices about how a woman is represented, and actresses are the ultimate representation of representation. So then it becomes a larger question about what actresses can do. They can’t always turn down roles. So do you leverage your way in there, get power, and then fight? Do you direct your own stuff? Do you do a little of both? That’s a longer conversation.

A Woman, A Part will be screening on Sunday, June 26, at BAMcinemaFest.