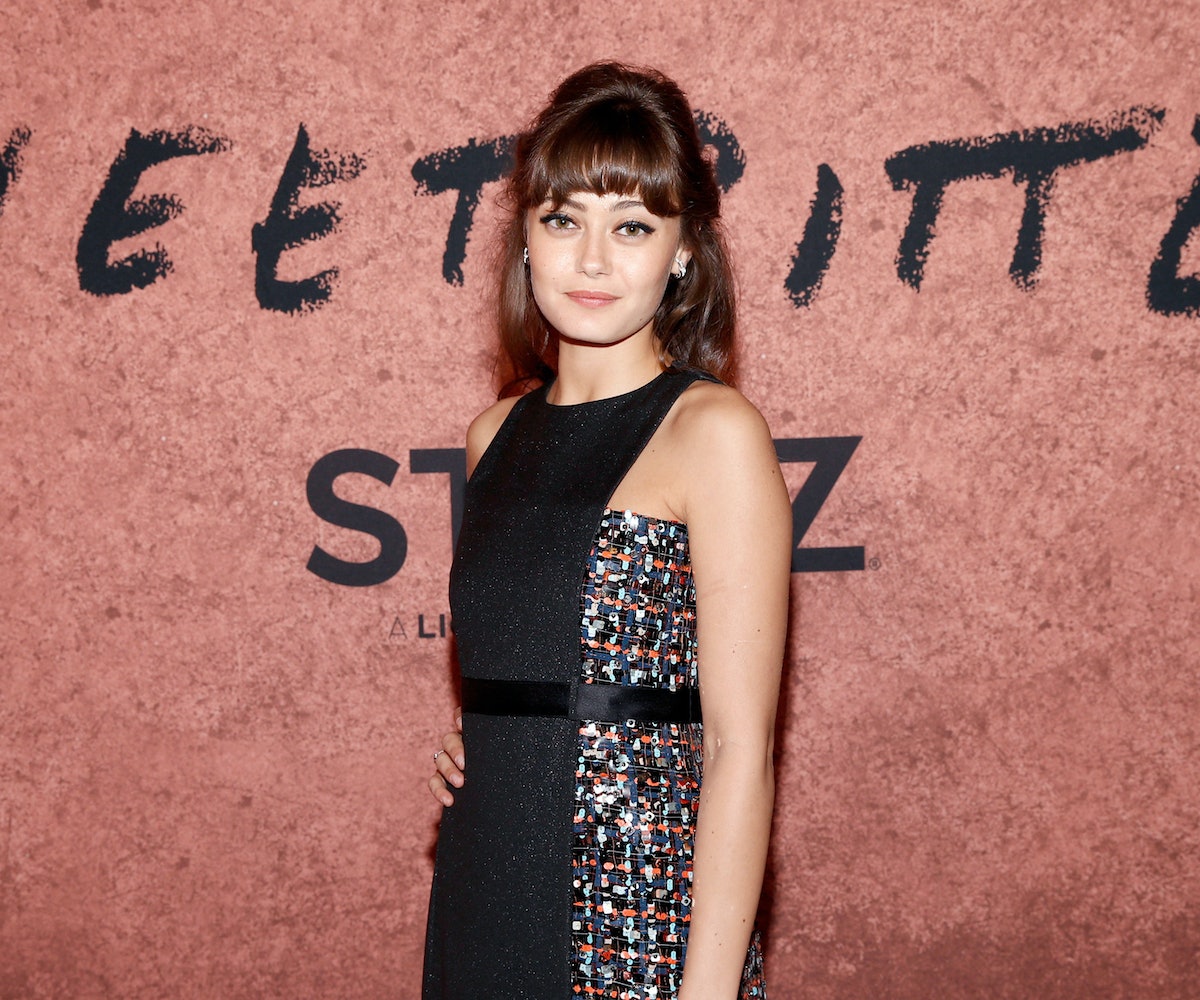 Much like her character Tess, Ella Purnell experienced a lot of firsts with Sweetbitter. It was her first television role, her first time in New York, and her first time working in a restaurant kitchen. While that might not seem like such a big deal for an actress who, at just 21 years old has already worked with both high-profile directors (in Tim Burton's Miss Peregrine's Home for Peculiar Children, she charmed audiences as Emma) and veteran actors (she played the teen version of Angelina Jolie's titular character in Maleficent), when you consider the fact that she was tasked with embodying the protagonist of arguably the book of the summer of 2016 from which the show has been adapted, it's a lot to take in. And yet, Purnell fearlessly plunged into the firsts, experiencing a sensory overload similar to the one Tess underwent in both the novel and, now, onscreen.

Such a sensate approach is fitting for a story that follows its 22-year-old protagonist from the moment she arrives in New York City and takes up a training job at one of the city's most prestigious restaurants. What follows next is a palate explosion of taste, smell, memories—made all the more visceral thanks to Stephanie Danler's (author of the book and writer-executive producer of the show) remarkable use of language when it comes to describing food and wine (she, like Tess, used to work in the restaurant industry), as well as the show's dynamic visuals. Interspersed among these sensory experiences are Tess' feelings of raw lust, desire for knowledge, and loss of innocence prompted by her peers, particularly her love interest, the brooding bartender Jake, but also her unofficial mentor, the mysterious, older sommelier, Simone.

Despite a plot that is ripe with drama and action, Tess' role in the book was written as a blank slate; she was a sponge that absorbs everything happening around her. Danler says Purnell's portrayal of Tess was "nothing like I envisioned" and "taught me so much about that character." While Book Tess was somewhat passive in what happens to her over the course of the story, TV Tess is full of desire for the NYC experiences that all 20-somethings crave—even if they lead to disaster. Also, TV Tess is funny, Danler points out. "Tess really belongs to Ella at this point," she says. "As soon as Ella started acting, I started to write for her."

Below, read how Purnell approached the role and why Tess is one of the most relatable characters she has ever played.

Over the course of the story, Tess matures from being this innocent girl to a woman with a more refined palate and knowledge of the world around her. How did you portray that transition in these relatively short 30-minute episodes?

It's actually kind of a reflection of how it was [for me], how my experience was filming it. It was my first time in New York. The audition process was all really fast. I had never done TV before, I had never even been a waitress before. I felt kind of out of my depth and really quite terrified, so in the first episode, it really is Ella as Tess trying to find my feet and my place. And I guess as I got to know my character more, and I had a bit more confidence in my abilities, and we all got to know each other better, that really actually reflects well in the show, as Tess finds her feet and gets better at her job and makes friends.

Throughout the show, Tess has these two very intense relationships, with Jake and Simone. Can you talk about how you portrayed them similarly or differently?

I am so intrigued, and I think about it all the time, even now, about, like, what is it that draws her to Jake and to Simone, separately and together? I think the two go hand in hand, one cannot exist without the other. I think it's mind and body.

I think that Simone is mind and intellectually stimulates her. It's poetry and wine and knowledge, and she's so self-assured and so beautiful and so authoritative and she knows everything about books and literature and poetry and wine and art and all the beautiful, classy culture. Tess has never met anyone like that before in her life. I think that [Simone] fascinates her, inspires her. Tess looks at her and goes, "That is what I want, that is who I want to be." And for the first time in her life, I think, she actually wants something. She wants to be something or know something or even have a proof or validation from someone. She's taken on a sort of like a weirdly twisted maternal figure, I suppose.

With Jake, I think, it's the complete opposite. It's not poetic, it is raw, it is rough, it is tough, it is a very animalistic sort of instinct. It is definitely a body attraction. I think that she's spent a lot of her life trying to sort of go along with things and take the easy route, and everything's been really reactionary for her, and now she's finally met this person who doesn't even wanna be nice. He makes absolutely no effort to be friendly, he's a bit of a bad boy, he's so haunted and full of self-loathing and is kind of just really rude. And doesn't care. And for the first time, Tess' gone, "Oh, it's okay to not be okay. It's okay to not be nice." And it's so mysterious and so sexy and so passionate and sensual. There's so much dark and shade and rough edges, but, also, he has a lot of pain and has a lot of light in him that Tess sees.

Stephanie Danler said you taught her so much about the character of Tess and brought so much natural energy and vigor to the role. How were you able to amplify that role that existed on the book's pages and make it into something so affecting?

I had quite a bit of experience doing things that had been adapted from a book and playing real-life characters and playing the younger version of actors. That's kind of my thing. I was very fortunate that I had this incredible book to base it on. I love it, I have read it so many times—it remains my constant inspiration and sort of, like, creative fire. But we discussed quite early on, I really wanted to leave them [Book and Television Tess] as two separate entities so that: (a) I could be completely creative and feel free without having the pressure of re-enacting something so perfect already, and (b) we just sort of decided that TV Tess was gonna be like a cousin of Book Tess. That is my what I go back to all the time for inspiration and a reminder to be grounded.

But, also having Steph working on the show and being there... Steph is the most incredible, intelligent person. Steph for me is like Simone is to Tess. She's entirely my savior, and we couldn't have done any of it without her. But she's the only other person that knows Tess and is Tess as much as me. I feel so fiercely protective of my character and Steph [feels protective of] the role. We just have this shared passion and shared understanding of everything [that makes] Tess [herself]. I really do feel like I did nothing, I feel like she did all the hard work and all I did was come in and take parts of myself, parts of Steph, and parts of the book and sort of all merge it into one big thing. Her words are really, really kind, and I really like it, and I also don't entirely understand it.

We also spoke about the fact that when the book came out, some people did not like Tess as a character, and Stephanie said that she thinks it's because people have a very hard time with young women making bad decisions. I don't know if you feel the same way, but I wonder if you approached Tess differently knowing that she might not be liked by everyone?

That's a really insightful and accurate thing to say—of course, it is because Steph's amazing. I read the book, and I loved her because I thought it was an incredibly vulnerable and honest position she put herself in, and she's not perfect. And I am very far from perfect myself. I think that there was something very refreshing and just open about it. I know a lot of people want to be perfect, and other people pretend that they are perfect. Tess isn't one of those people. She very openly says, "I'm fucked up, I need help," or "I messed up, and I need help." Or she very openly says, "I'm lost and I need direction." I think that's a really really beautiful thing. I think the first rule of acting is you never, ever judge your character. I couldn't have judged her even if I tried, but for the people that would've judged her, that wouldn't have liked her, I think you have to see the beauty in the imperfect, and she is not something that even wants to be fixed. She just wants to live and get to know herself, and I think that she does exactly that in the book and partly in the first season.

Also, I didn't want to play her likable. I didn't want people to like me. I just wanted to play her truthfully. I think you'll have some people who read it and go, "Oh, she's messed up. She has no structure. She's this and she's that." Like, this is real life. She is the most realistic character I've ever had the fortune of playing, I think. She's just grounded in naturalism and real life. I don't know anybody that is not having an existential crisis at the age of 21. It is hard. She's unapologetically saying, "I don't know who I am, I don't know where I'm going, and I don't know what I want." And everybody can relate to that I think. It's such a relatable story.

So even though Tess' story may seem singular, because its a story about a waitress in New York City, do you think it's actually a universal coming-of-age story when it comes to any young woman's experience?

Absolutely, yeah. I mean, yes, it is a coming-of-age story, but it’s not your typical coming-of-age story in the sense that it's not glorified. It's also a story about New York, and it's not the glamorous type. It's not Sex and the City. We're not moving into a beautiful apartment and going shopping. It's gritty. It's dark. It's lonely. It's terrifying. I just think it's a really honest portrayal of something really relatable.

On a lighter note, the book, obviously, is about how Tess is learning to appreciate food and wine over the course of this journey. Are you a foodie yourself or did you discover something new about your palette along the way?

A bit of both. I love food, but I've never learned how to appreciate it properly until I got this job. Learning to talk about wine, learning to talk about Champagne, about your own palate and taste buds. Even just learning little thing—like spice is on your lips and sweet is on the tip of your tongue and we have so many taste buds—I now feel like I can enjoy food as a whole experience rather than just a way to fill my tummy. I'm so much more attuned to different flavors and feelings and how food makes you feel.

Sweetbitter premieres on Sunday, May 6, on Starz.