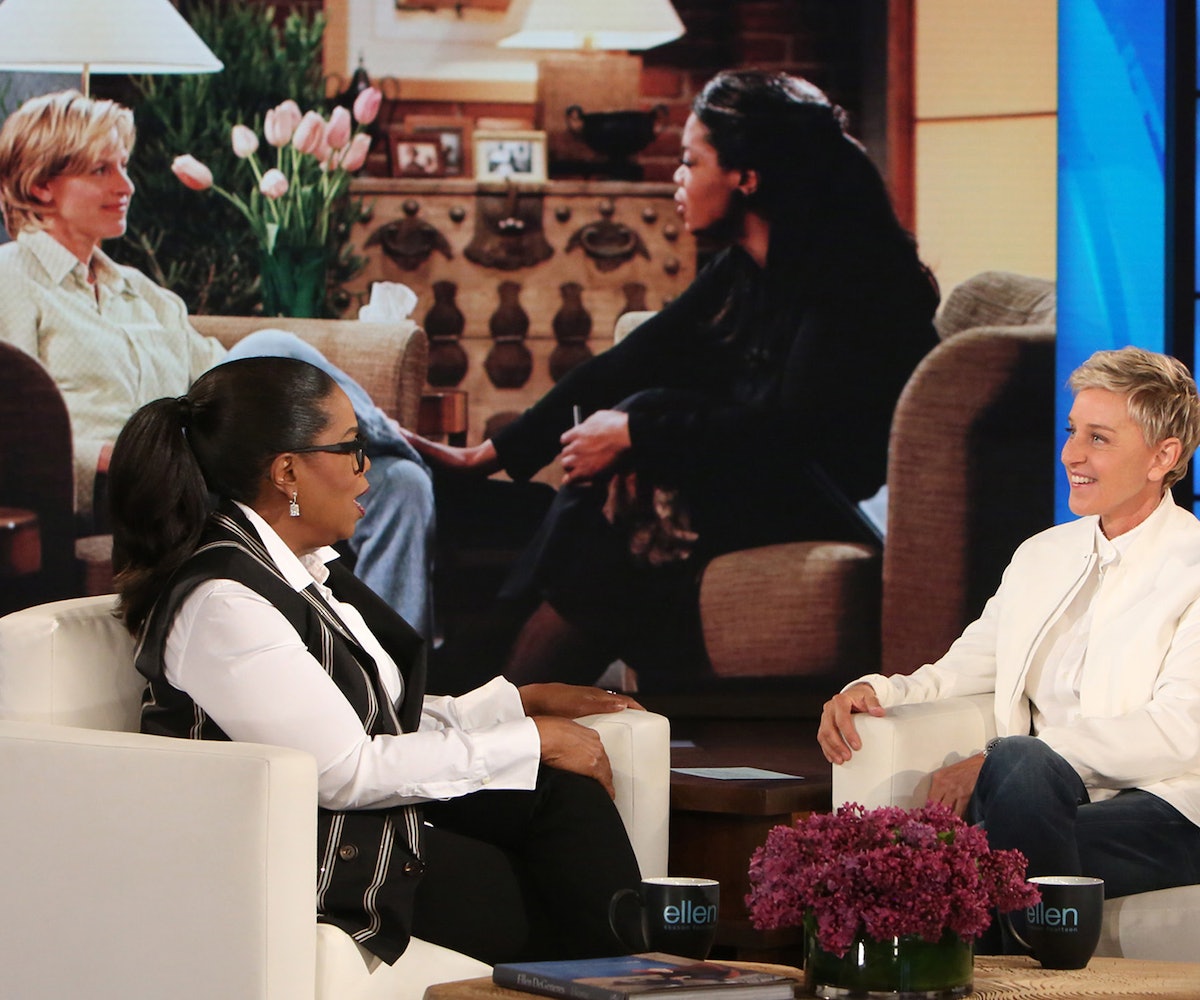 Ellen DeGeneres publicly came out 20 years ago this weekend, thus prominently centering a lesbian in the living rooms of 42 million viewers. Ellen's pioneering move followed longtime speculation surrounding the comedian after news leaked she was lobbying NBC for her titular character on her sitcom Ellen to come out. It then approached its peak when DeGeneres covered TIME Magazine's April 14 issue with a headline reading "Yep, I'm Gay," just before the coming out episode aired. The storm that followed "The Puppy Episode" would be unprecedented in its impact, both positive and negative, for the LGBTQIA community.

The media frenzy DeGeneres started exposed a raging homophobia within America and got the nation talking about LGBTQIA visibility and rights. Today, Oprah, appearing on The Ellen DeGeneres Show alongside Laura Dern, who played DeGeneres' love interest on Ellen, shared her experience following her guest role in the coming out episode, saying how shocking it was to realize a vast majority of the American population did not agree with DeGeneres' truth.

"I was never so surprised [as I was] by the hatred and how loud it was," she said. DeGeneres went on to face her critics on Oprah's talk show, engaging with them, and frankly discussing the situation. (Ellen was, unfortunately, canceled a season later.)

In the two decades since, LGBTQIA visibility on television and in the movies has improved. NBC premiered Will & Grace a year after Ellen's "Puppy Episode"; 2000 saw Queer as Folk begin its five-year run on Showtime; The L Word came in 2004; Noah's Arc in 2005. It's the 2010s that have seen a significant increase in visibility, with shows like Glee, Modern Family, How To Get Away With Murder, and Ugly Betty featuring prominent queer storylines and characters. Logo's runaway success RuPaul's Drag Race is now being broadcast to a larger audience on VH1. Ellen DeGeneres herself returned to NBC in 2003 with a talk show that has gone on to win nearly 40 Emmys.

There's no way of telling where we would be today in terms of LGBTQIA visibility had DeGeneres not come out. Her bravery helped make last year the best year ever for queer visibility according to GLAAD's annual Where We Are on TV Report. That's huge. Representation and visibility matter immensely. To see someone like you on television and in the movies is necessary to personal growth and self-acceptance; it normalizes an experience like learning your sexual and gender identity, which can often feel alienating.

Much progress is still yet to be made, though. Though the increase in LGBTQIA visibility is encouraging, there's a need for diversity in the narratives being told. It's dismaying how almost every queer female on television gets killed off. HBO's groundbreaking show Looking was problematic thanks to a lack of storylines from outside the affluent white gay urban experience. (Unfortunately, the show was canceled just as it was beginning to make some solid headway in that department.) GLAAD reports that transgender representation doubled last year, which is something to celebrate, but the cry for more is loud—especially when movies about trans youth get slapped with a rating that prevents the youth from actually seeing them. (The movie in question is now being recut for a PG-13 audience.)

The important thing is that visibility is increasing. DeGeneres changed television forever. "It’s easy to forget now, when we’ve come so far, where now marriage is equal under the law—just how much courage was required for Ellen to come out on the most public of stages almost 20 years ago," President Obama said, awarding DeGeneres the Presidential Medal of Freedom last year. "Just how important it was not just to the LGBT community, but for all of us to see somebody so full of kindness and light, somebody we liked so much, somebody who could be our neighbor or our colleague or our sister challenge our own assumptions, remind us that we have more in common than we realize, push our country in the direction of justice." That's something to celebrate. Hell, dance because of it. It's what DeGeneres would want us to do.