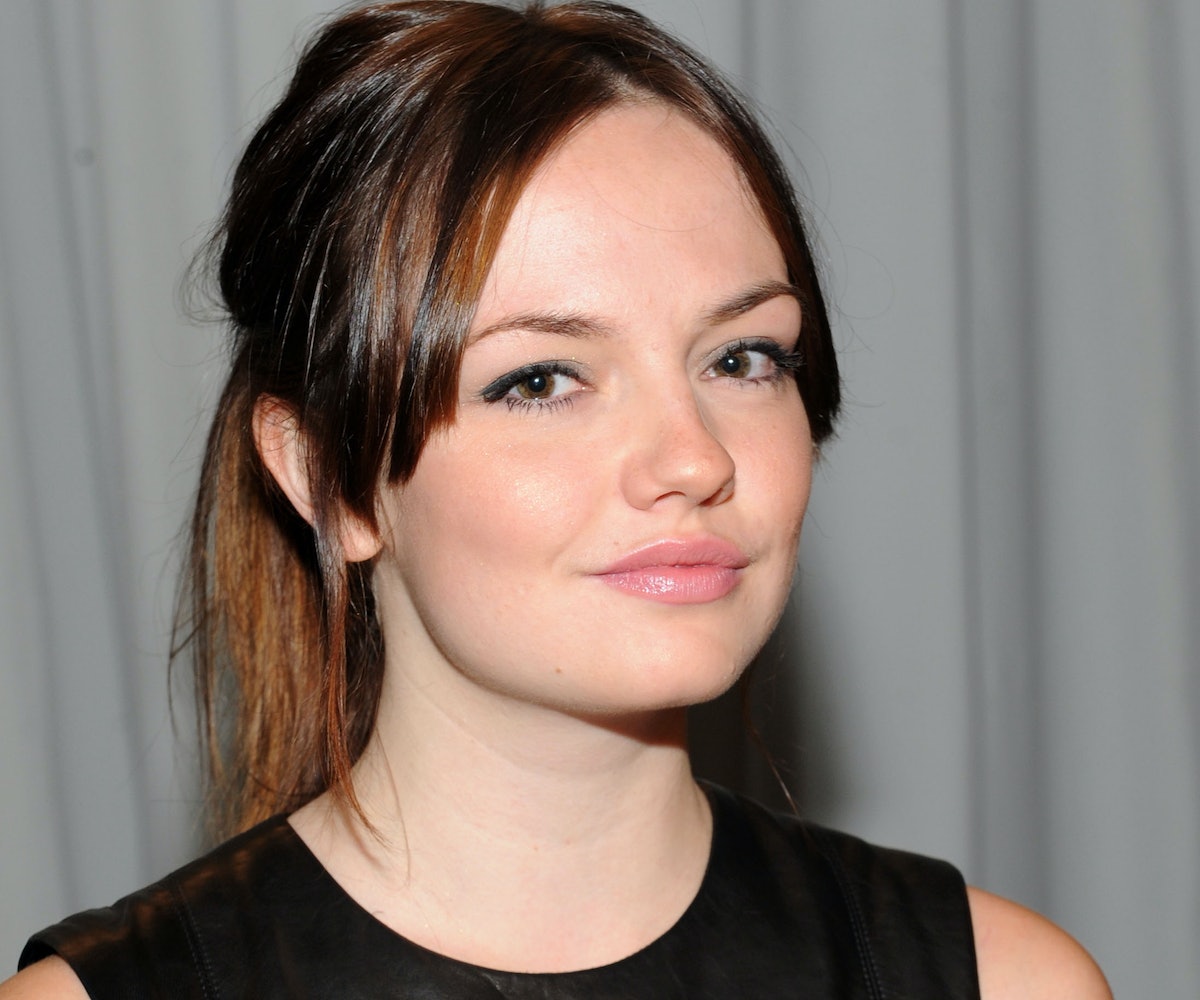 The new techno thriller Nerve presents a version of reality that is disturbingly adjacent to ours, in which a person's worth is judged by how many followers they have, and how those followers can make or break you. The plot revolves around Nerve, a hybrid of reality TV and location-based gaming that comes with the ominous tagline “Like truth or dare, without the truth,” which allows anyone to log in as a player or watcher for a 24-hour “game.” Players are guided by crowdsourced, financially rewarded dares that are provided by the watchers. As the game continues, those dares increase in intensity until only two players remain.

In the film, which is based on the popular YA novel of the same name, Emily Meade plays Sydney—best friend to Emma Roberts’ Vee—who takes the lead in the game, thanks to her propensity for exhibitionism and desire for validation. She’s willing to do anything the watchers throw at her and is on her way to the top until she challenges Vee to join. Pitted against one another, they're later joined by Dave Franco's Ian, who sets the story into overdrive. The darkness of the game is soon revealed, and players and watchers alike are forced to make some irrevocable choices. It all draws the question of how much of our humanity is sacrificed behind the anonymity of a username and a screen. We recently spoke with Meade—who is currently shooting the upcoming HBO period drama The Deuce—about the film's depiction of youth culture, why she's avoided social media, and how her smartphone ruined her dreams of being a detective.

What’s the wildest thing you’ve been dared to do?

It's funny 'cause I feel like most of the daring things I've done I haven't been dared to do. I just voluntarily wanted to do them.

I just mean in general, especially in my youth—I was a bit wild. I tend to do more daring things along the lines of the supernatural versus the physical. Going into haunted houses for example, or skinny-dipping and running naked through the woods, things along those lines more so than bungee jumping or anything like that.

How much do you feel like you and your character Sydney have in common?

I'm a bit older than Sydney is, so I've grown out of a lot of her ways, but I definitely relate to her. I think Sydney comes off as this cocky, possibly mean, possibly promiscuous, loud, attention-seeking person, and I think a lot of that is just driven by insecurity and wanting to be loved. I don't think that I ever played it out in the same way, but I definitely relate to that turmoil as a teenager. That insecurity and desire for some kind of validation, which leads to over-compensating in a lot of ways.

I felt so grateful the whole time I was watching this that there wasn't any of this technology available when I was a teenager.

Yeah, me either. Well, it was just starting. I didn’t get Facebook until I was maybe a junior or senior in high school.

So, the game Nerve is comprised of players and watchers. Outside of the film, which would you say you are more of?

I'm a player. It’s funny because I can be a super-neurotic and fearful person, but the more I'm afraid of something the more I feel the compulsion to do it.

How close do you think that we are, with everything that we have going on in technology, to creating a game like Nerve?

I think we could have it now, basically. I don't think we should, and I hope that we don't, and I hope that kids don't try this at home, but yeah, I think we pretty much have all the technology. As the directors, Henry Joost and Ariel Schulman said, “the movie is 10 minutes into the future.” We don’t need to develop anything for Nerve to exist—we just haven't gone there yet.

Did you find this to be a realistic depiction of youth and the culture of today?

In a way. I think it's hard for me to say because of coming slightly before the internet generation. I don’t think it’s possible to really know yet about the results of growing up in a time where having access to literally everything, and exposing yourself and other people, is right. You can do anything from your home, and I think this is such a new phenomenon that is rapidly changing the way young people interact—the way all people interact. I'm not a teenager now so I can’t say that this is 100 percent correct, but I think it seems pretty accurate, and I feel if people are given too much power they will take it, unfortunately. That's the scary, unclear part. What will be the results of growing up with all of that access? What will it lead to?

There’s a lot of importance placed on online presence and followership by the film and also by your character in it. Are you personally as concerned about having an online following?

Before filming this, I had absolutely no social media and I was deeply, deeply opposed to it. I was silently rebelling against it and refused to let that be a factor in my career. I said, “I'm going to do it the old-fashioned way.” As a result of doing the film, I became more conscious of and involved in thinking about social media, and I figured I would try joining Instagram just for the hell of it, to see what it's like and join the conversation. I wanted to see if I could have my own voice in it, versus just being silent. I still waver; every other day, I say, "I'm just gonna delete it, completely pull out." But your ego definitely is affected by each follower and each like you get. On one hand, that's scary and I don't like that, but on the other hand, it's kind of fascinating. You have to kind of experience it firsthand in order to understand it. I know it sucks that apparently it's a part of our careers now as actors—part of me resents that—but I can also find it humorous when I look at it from a bird's eye view and see how bizarre it is that that's a part of it.

What’s your relationship with your cell phone like? And do you think our smartphone-addicted culture is getting out of hand?

Absolutely, yes. I like to consider myself a detective, which is how I justify my obsession with my phone. By nature, since I was a kid, I've always wanted to be a detective, and any portal to information and investigating things I have ever been given access to, I have dived into. With my phone, unfortunately, I have immediate access to everything. Whether it's stalking someone on social media or going down a rabbit hole on the internet, researching things. I definitely get sucked in for actual hours with just one piece of information leading to the next leading to the next, and always feel sort of dirty and disconnected after. It’s all because I have that curiosity, and it's a lot easier to do that on your phone than to go around with a magnifying glass trying to find a mystery. It's definitely scary, but it's also human and forgivable, and I think we have to find that balance of accepting that that's our nature and people have obsessive-compulsive tendencies. That's what we do. In addition to that acceptance, we have to try to find a middle ground with it, as opposed to being abstinent.

You're currently shooting the new HBO show, The Deuce, with James Franco. How has that been and what's it like shooting through the streets of "decades-old" New York?

It's also been really fun, in an entirely different way than Nerve. I think it's a really good quality show. It’s set in the ‘70s, which is my favorite time period. I drench myself in the ‘70s as much as I can, so it's been pretty cool to sort of live in that world. It's about the start of the sex industry—or rather, the start of the porn industry—and shows the political and the historical, the emotional and personal aspects of that. It’s something near and dear to my heart, and I think it's important to everybody. It always feels good to be a part of something you think could actually impact human beings. This isn’t my first time shooting in New York but I’m from here, and it's always kind of surreal to be shooting a movie or TV show where you grew up. Definitely a pinch me, little girl moment to be in your hometown and making something.

Now you’ve worked with both of the Franco brothers. How do they compare to each other?

They're both highly intelligent, highly kind, good people. Of course, they're different because everybody's different, and I like them both in different ways, but they're definitely some really smart and good humans.