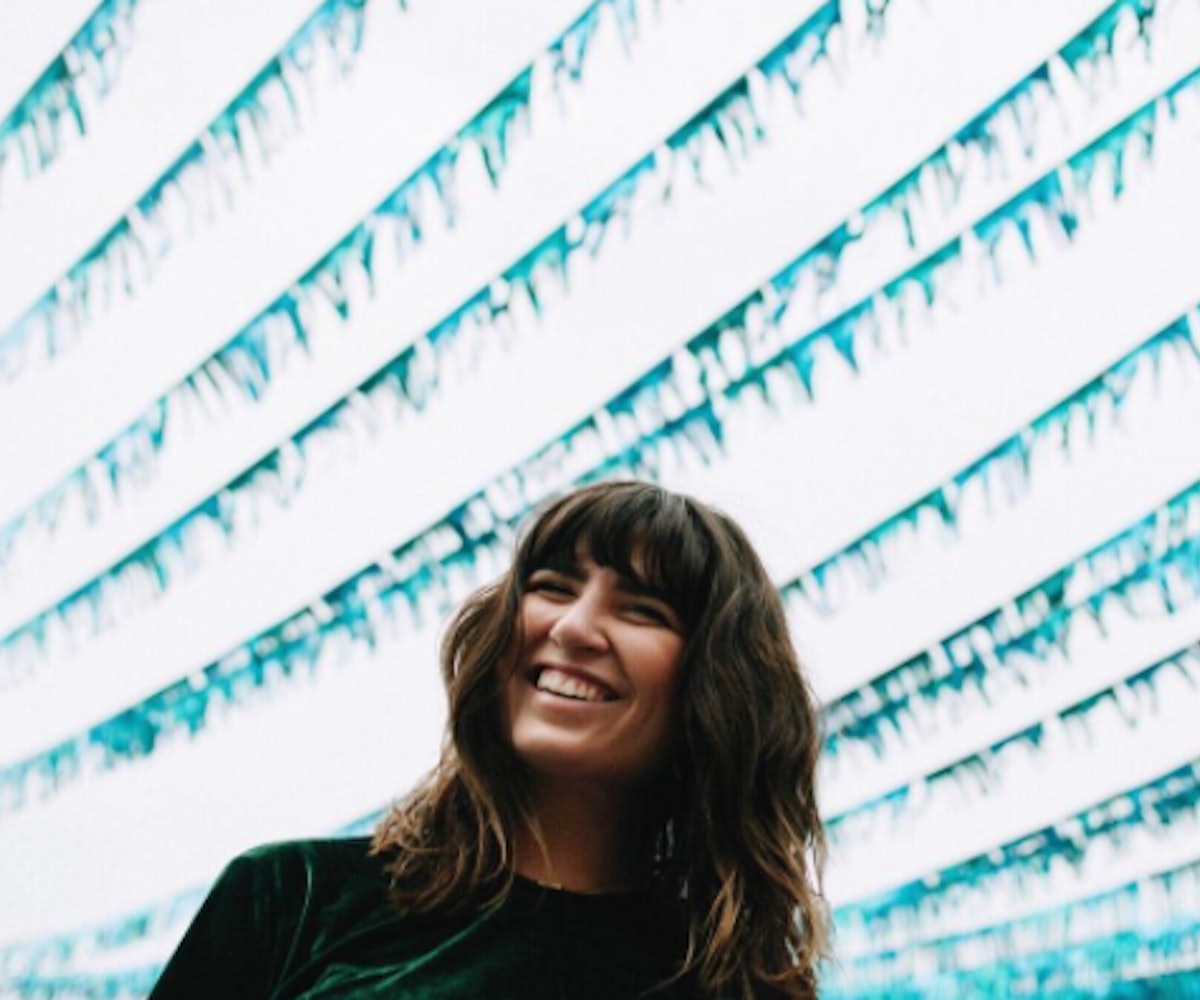 Given her openness and charisma, not to mention an impressive list of songwriting credits dating back to 2013, it’s almost funny that Emily Warren’s proper coming out as a solo artist was billed by many as a reveal in the first place. In reality, Warren, who began penning tracks for pop powerhouses like Jessie J and Shawn Mendes while she was still studying music at NYU, has had a rise to prominence that quickly went from gradual to all at once, gaining steam with each hit she helped pen.

It started with her credited turn on Capsize’s “Frenship,” a slow-burning sensation that eventually went platinum and reached the Billboard Hot 100. But Warren became something of a household mystery figure when she lent her voice to the Chainsmokers' “Paris,” which is either the most or second most ubiquitous song of 2017, depending on what you think of their other hit, “Something Just Like This.”

But Warren has now officially stepped into the spotlight on her own with “Hurt By You,” a soulful standout that makes great use of Warren’s confident, varied vocal delivery by building Motown style harmonies and incorporating some vintage soul elements into her distinctly modern songwriting approach. Even the single’s artwork is a nod to Etta James’ seminal “At Last.”

The track is vulnerable and frank, so while musically it is just about as far as you can get from singles like “Paris” or Jessie J’s “Masterpiece,” Warren’s songs are all linked by her commitment to mining truth from her own life or those of her collaborators. She’s fighting the misconception that pop songwriting is often interchangeable, and her mission of empowering artists to tell their own stories is making what comes on your radio far more palatable.

Fresh off an opening spot on the Chainsmokers’ recent tour and with plenty of new music on the horizon, we caught up with Warren about her process, how today’s boom in songwriters making their own music recalls the 1960s, and being the mystery voice on “Paris.”

There was a tweet where you shouted-out your fellow songwriters who were putting out their own music and likened it to the 1960s. Could you explain that?

My dad raised me on a lot of ‘60s music, and it was always like, ‘Okay, here’s Carole King, and here’s the song she wrote for this person, and here’s her music.’ It was way more fluid as common knowledge, and now it’s so interesting seeing, like, Julia Michaels and all these different people who’ve been behind the scenes putting songs out. And part of what they’re using to introduce themselves is the whole catalog of songs they’ve written for other people, which I think is so cool and how it should be.

Do you think it’s easier for a songwriter to make that jump into being a solo artist nowadays than it used to be?

For me, what made it such an easy decision were things like when “Capsize” went viral on Spotify. It kind of made me realize, that with Spotify being such a big part of the way people listen to music now, you don’t have to be any sort of specific artist. Before this period, when there were these kind of manufactured pop stars, it seemed scarier and harder as an artist. I just wanted to put songs out and be myself.

How did you realize writing was as much of a passion for you?

I always kept diaries when I was growing up, and when I figured out I could turn them into songs it was like anything that happened to me had to turn into a song. That’s how I kind of feel when I’m listening to music, too, and going through new music. It bothers me that songs come out just because a label thought that it was going to be a hit for an artist versus telling a story that’s personal.

What was your first major credit?

The first song that I was really freaking out about was the Jessie J single “Masterpiece.” I had another song that I pitched to her; it was called “Ain’t Been Done” that went on the album, and once we had that we pitched her “Masterpiece.” It was crazy for me because I’d gotten album tracks before, but never a single, especially from Jessie J who I really admire. I remember Diplo had a single in the mix, and there were all these other people in the mix, and somehow we got the single, which was a huge deal for me, I was still in school at the time. I’m constantly pinching myself because I feel like since that point it’s just been one ridiculous thing after another.

How does your approach change when you’re working with an artist like Jessie J versus a band like COIN?

With Jessie J, that was a pitch song. I never actually worked with her. My approach is related to what story I'm telling with the song. My approach to writing, and why I like to be in the room with an artist normally when I’m writing a song with them, is that I really just want to get an honest story and tell the truth with them, and you’d be surprised how many times I’ve been in the room with an artist and said, "What’s going on with you?" and they’re just shocked that someone is asking them that question and that I’m not coming in with a concept that I want to make work or whatever. For me, the music that I like to listen to tells someone’s unique story and perspective, so whenever I go in with an artist, it’s an hour, two hours, three hours, of just talking and helping them open up.

Who helped inspire your writing process?

Scott Harris, who I’ve done a lot of stuff with, he and I kind of came up with this approach together. I guess it was two, maybe three years ago, we were working with this band that had these two twin sisters, and we ended up going to work with them in their hometown for like a week. We weren’t really getting anything at the beginning, and then I’m a twin, too, so I was asking them about [that experience], and we got in this whole crazy conversation where these two twin girls were telling each other all these insecurities they’d never talked about while Scott and I were just watching this whole thing unfold. Everyone’s got shit that they’re dealing with, everyone’s got stuff. We realized in that moment: Our jobs are so much easier now because we just have to help people get out these ideas that are already within them, and help craft that. It’s genuinely what made me really fall in love with songwriting; I used to say I would never write songs for other people, and that was kind of the turning point for me.

What do you think about the state of pop music today?

My mom was saying the other day someone said to her that I was a pop artist and she was like, "Pop is Britney Spears, I don’t think you’re pop." We had a whole conversation about it because I probably wouldn’t describe myself as a pop artist, too, because pop just means popular music, which hopefully means anything that people will listen to, which is just such a broad category now. I think because of platforms like Spotify and things not needing to be formatted, in order for people to hear them on radio, it means that everything has a fair shot, which is so cool. I write a lot in the U.K. for this reason, and it’s now happening here. They’re just more receptive, they’ll play stuff off of SoundCloud on radio stations there, and it’s starting to be like that here. Radio is probably going to take another second, but with playlists and the way that people are sharing music now everything kind of has a fair shot, which I think is great.

How do you feel about the fact that so many people discovered you as the uncredited vocalist on “Paris?”

I’m totally happy with how it happened. We always joke about how I was never going to get a feature on “Paris,” because the song was basically done when I jumped on it. I just happened to be like across the street, and Drew [Taggart] was like, "Can you come sing something?" and I just came and sang that and then the song was out within a week. Drew and Alex [Pall] themselves are extremely supportive of me, just the fact that I’m on this tour with them and that everyone on the tour was sharing my song when it came out.

When [“Hurt By You”] came out a couple weeks ago, so many artists I’ve worked with were posting about it, which I didn’t ask them to and they didn’t have to, and it was so cool to see, so positive to see people support each other. I loved that.

How did “Hurt By You” come together? Why did you want that to be the single that introduced you to the world as a solo act?

I played a handful of songs for a bunch of people, and what everyone said about that song was that they couldn’t place what genre it was—it sounded like it was all these different genres. I loved that, because when I was in my band [Emily Warren & The Betters], the number one criticism we would get was that I needed to figure out what my style was; we’d have a rock song and then a reggae song and then a pop song, and we were kind of all over the place. To me, “Hurt By You” is the culmination of that because it’s very much me, but it’s also tying in all the music that I love and listen to.