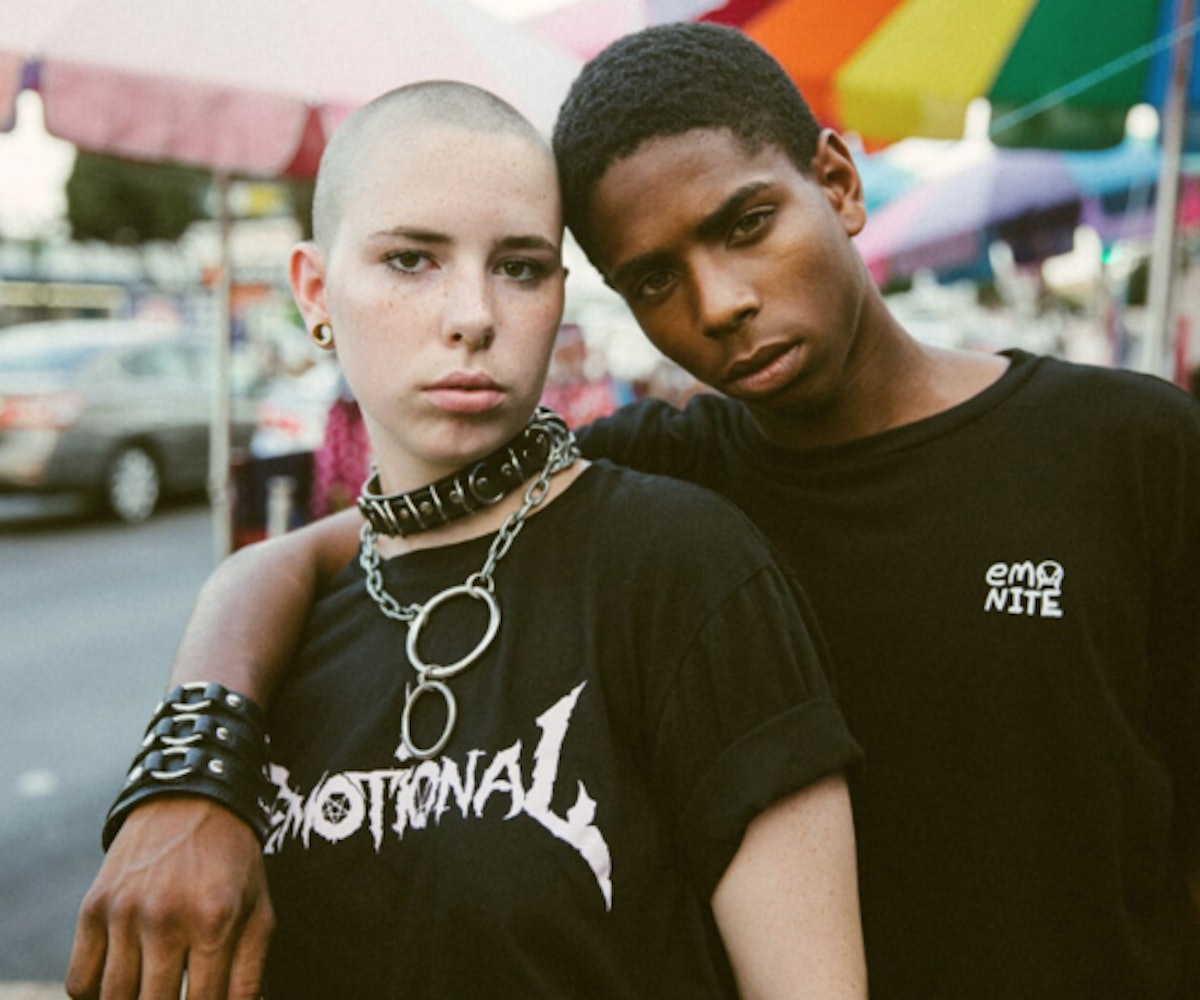 “Emo is something different to everybody.”

There’s no guesswork to this statement. It’s straight to the point, assured. But it isn’t the sort of phrase you’d expect to hear from a trio who run something called Emo Nite. After all, emo is all about the mystery, right? The intrigue, the darkness, the emotion—they all define what “emo” means. And in this way, it’s why emo is less about the music and more about the mood it puts you in.

If there’s anyone who gets emo, though, it’s probably

, Babs Szabo, and T.J. Petracca, the three friends who transformed a weekly karaoke and dance party in Los Angeles' Echo Park neighborhood into a national brand with a cult-like following. By hearing “Emo Nite,” you probably have an idea of what to expect. But it’s more than just that.

“Emo Nite is a place for people to come together and have a good time and listen to music that made them who they are, and music that they still listen to. It’s where people can let down their guard and be themselves,” says Szabo. It’s also a “joyous celebration,” where 2,000 people can come together on a Tuesday night, scream along to Fall Out Boy and Dashboard Confessional, and leave with new best friends.

The night itself encompasses more than the hours it spans across. For anyone who grew up as an outsider, emo music—all music, really—was more than just a song or a band; it was also catharsis and a refuge. And it's still possible to find comfort, even years later, in the songs that got us through teen angst, heartbreak, hell and back. “A lot of it is about people letting go of work, and stress, and whatever else is going on their life. Maybe drinking too much, meeting new people. The atmosphere is overall really positive and really supportive,” says Petracca. Perhaps that’s why people leave the night with new best friends, or even, in some case, spouses.

In the end, it’s always about the memories. Emo Nite barely sells any presale tickets, and to pick up one of the 100 they sell, you have to come to their store. The night has always been an experience, and part of that is bonding in line, waiting to get in, meeting new people, and enjoying the electric buzz in the air, the kind that happens before embarking upon a night you know you won’t forget.

Emo Nite even permeates the professional world; most of its attendees are millennials, over the age of 21, with full-time jobs. “Half of Los Angeles calls out on Wednesday,” Freed says. It’s a fact; everyone knows Emo Nite, and even those who attend in other cities, thanks to Emo Nite tours and offsprings in other locations, know to prepare for the night ahead, mostly by leaving their worries aside and going in with an open mind.

“I did Denver on the night of the election, and that was the same night that somebody got engaged there also. It was one of the weirdest, most surreal things ever,” Freed says. “I was like, ‘This is a real thing, Emo Nite is a real thing that helps people get through.’ People were watching the TV, but really trying to enjoy the time and ultimately they did. It was something I’ll probably never forget, because of how important this night was to people. They would put something so devastating aside and revisit it later. At that point, I was like, ‘Emo Nite is doing good.'”

And now they’re taking good to an even bigger place. Besides Emo Nite as an event, the brand also has a clothing line, which started as a single shirt, and a podcast. And their latest collaboration is one for the books. Emo Nite and OWSLA Goods, Skrillex’s clothing line, have come together for a capsule collection.

“Our collection is inspired by the 14-year-old kid from 2004 who thought local bands were the shit, who would steal their mom's sewing kit to patch their jacket, collage everything on their bedroom walls, wear Converse, and draw fake tattoos on themselves,” says Marilyn Tang, art director of OWSLA Goods. “This collection is basically inspired by that time period and those kids.”

The capsule features nine pieces, which will be available to purchase at the next Emo Nite (tonight, September 5) and which combines OWSLA’s street styles sensibility and Emo Nite’s optimistic sadness. The collab, the biggest Emo Nite has ever done, features a hoodie, tees, a worker’s jacket, pins, hats, and stickers. “We’re really excited about it. We love OWSLA and feel like they draw a community that’s similar to ours even though it’s different music,” says Szabo. “It goes beyond an event that they threw, or the merch that they make. It’s a state of mind.”

This state of mind is something Emo Nite embodies as well; an attitude in which to see the old and the new. And since emo music isn’t going anywhere—“I think it’s being made more than we actually think,” says Freed—we know that Emo Nite will continue to live on. Whether through the night itself or the friends and memories made, emo never dies. Long live emo.

You can keep up with the latest Emo Nite happenings on its site and via Instagram.