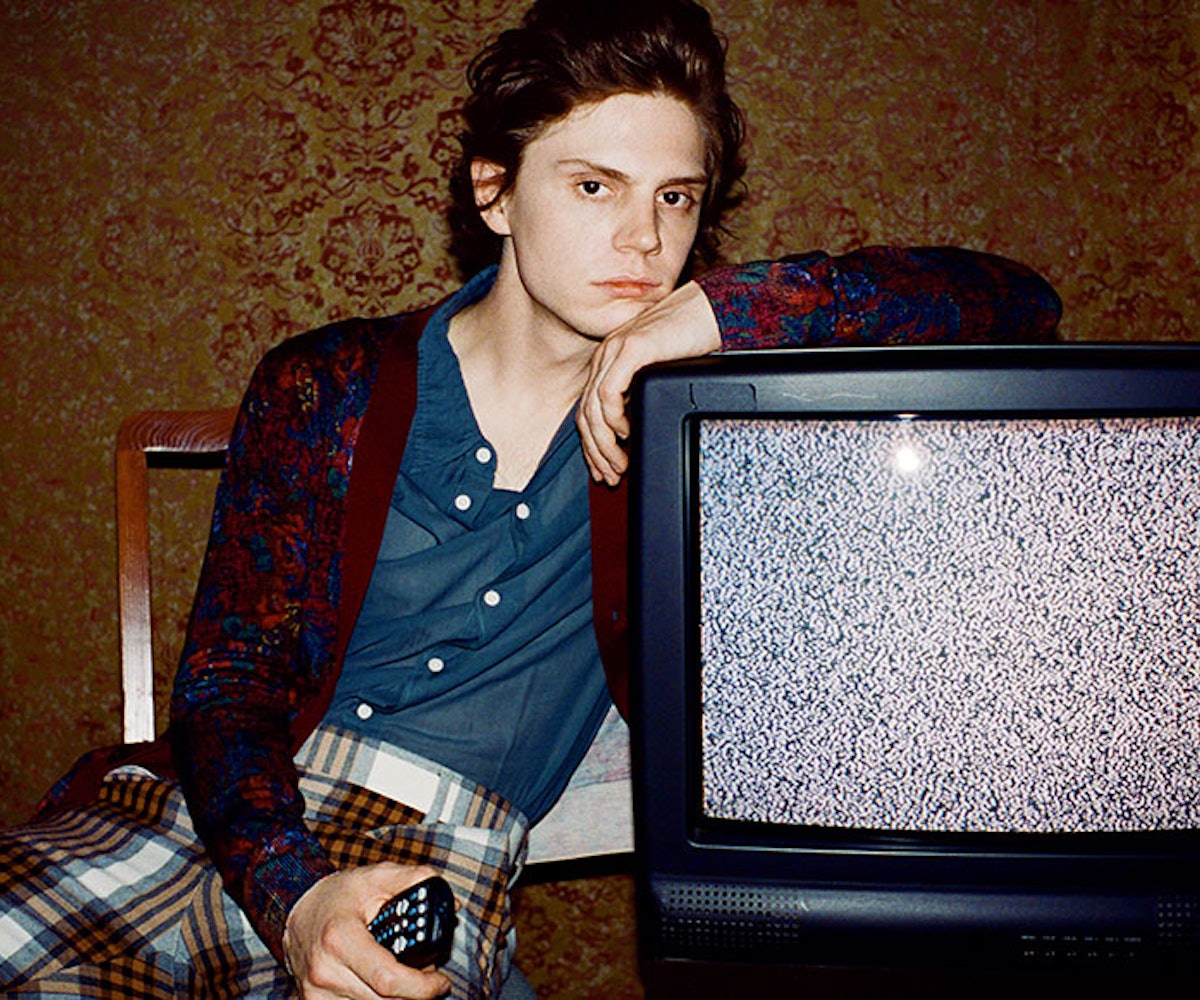 Evan Peters is terrified of hotels. It’s unclear whether this has been a lifelong phobia for the actor, or if it’s something new. After all, he and his co-stars did just receive some of the scripts for American Horror Story: Hotel, the latest season of Ryan Murphy’s chilling hit anthology series, and Peters has already torn through the first three episodes. But now, a couple of days later, he’s standing in a stairwell at Harvard House, a particularly creepy, crumbling old motel in Hollywood, which is leaving him a little unsettled.

“There are so many spirits and demons,” he says ominously. “So many people have been through those halls, those rooms. You don’t know.”

He pauses and looks around. It’s a weekend in late June at the decrepit Hollywood Boulevard boarding house; the place is stone silent save the sound of a few passing cars. The doors to a couple of rooms upstairs stand ajar, revealing piles of remodeling supplies that look untouched since 1975.

After spending seasons two through four of the series as a falsely accused serial killer, a pitiful Franken-boyfriend, and an unlucky freak-show performer with daddy issues, Peters is excited to finally return to where he started in season one: as the villain.

“It’s really hard to play the guy on the receiving end,” he explains. “You’re constantly battling yourself doing these things that the character chooses—you’re like, ‘No, don’t do that, man! Don’t go down that hallway, come on!’ It’s much more fun to be the guy who’s terrorizing everybody.”

In truth, the actor is a recent and perhaps reluctant convert to the horror genre, preferring instead hard sci-fi, so his part in AHS has required ongoing research. Filming for Hotel only just started this month, but as he talks, it’s clear Peters is already thinking about his character’s entire arc.

“It’s hard as a hero to react, but it’s hard as a villain to justify what you’re doing,” he explains. “To humanize it. I think it was Javier Bardem, while he was doing No Country for Old Men, who said, ‘You don’t have to do that for a villain...’. And he was fantastic in that movie.”

But press Peters for details about his character, and all you’ll get are roadblocks. “I can’t really say anything, but I’m very excited about it,” he says, more than once.

Like its preceding seasons, American Horror Story: Hotel is being kept tightly under wraps until it debuts in October. At publication time, all we know are a handful of new cast members (Cheyenne Jackson, Max Greenfield, and Lady Gaga—no singing, though), a few character names (Peters will play someone called Mr. March), and a promise that personalities from previous seasons will be checking in. According to Murphy, Hotel will be “straight horror...a little bloodier and grislier than anything we’ve done before.”

“It’s my favorite season so far, and I haven’t said that,” says Peters. “It’ll be very different, different than anything I’ve ever played, in my career and on the show.”

It’s been a long time coming, as most of Peters’s roles leading up to AHS ranged from angsty suburban teen (Sleepover, Phil of the Future) to…well, angsty suburban teen (One Tree Hill, Kick-Ass). Since being cast in 2011 as Tate Langdon—admittedly also an angsty suburban teen, but this time a murderous psychopathic one who’s also a ghost—he’s started nabbing bigger, better, and more complicated jobs. Tomorrow, for example, he flies to Montreal to begin filming 2016’s X-Men: Apocalypse, in which he’ll reprise his X-Men: Days of Future Past character as the speedy kleptomaniac Quicksilver. On top of that he’ll be playing Dwight Chapin, the deputy assistant to President Nixon during Watergate, in Elvis & Nixon, a movie about the president’s infamous meeting with the King in 1970.

“Horror Story is allowing me to do different roles, not get pigeonholed into one thing,” says Peters. “I want to do it all…see if I can do it.”

Over the past 20 minutes, the air around the stairwell has been slowly filling with music, first soft, then louder and louder until Peters has to repeat himself to be heard. Now it’s finally clear what’s going on: the Hollywood Carnival parade is making its way down the street with multiple bands, PA systems, and massive feather headdresses in tow, which means it’s time to wrap things up.

“I’m a character actor,” he says. “I never wanted to do just myself. I don’t like to be me—in fact, that’s one of my pitfalls now, when directors say, ‘Just be yourself.’ I’m like, ‘I don’t want to fuckin’ be myself! That’s why I’m acting! That’s why I’m an actor!’ I want to lose myself in a role. That’s the goal, for me.”

NEXT UP
Culture
Not One, But Two BTS Documentaries Are Coming
Culture
Jeremy Allen White Has At Least Four A24 Scripts on His Desk
Life
NYLON Daily Newsletter: November 30, 2022
Culture
Spotify Wrapped Is The Only Social Media That Doesn’t Lie