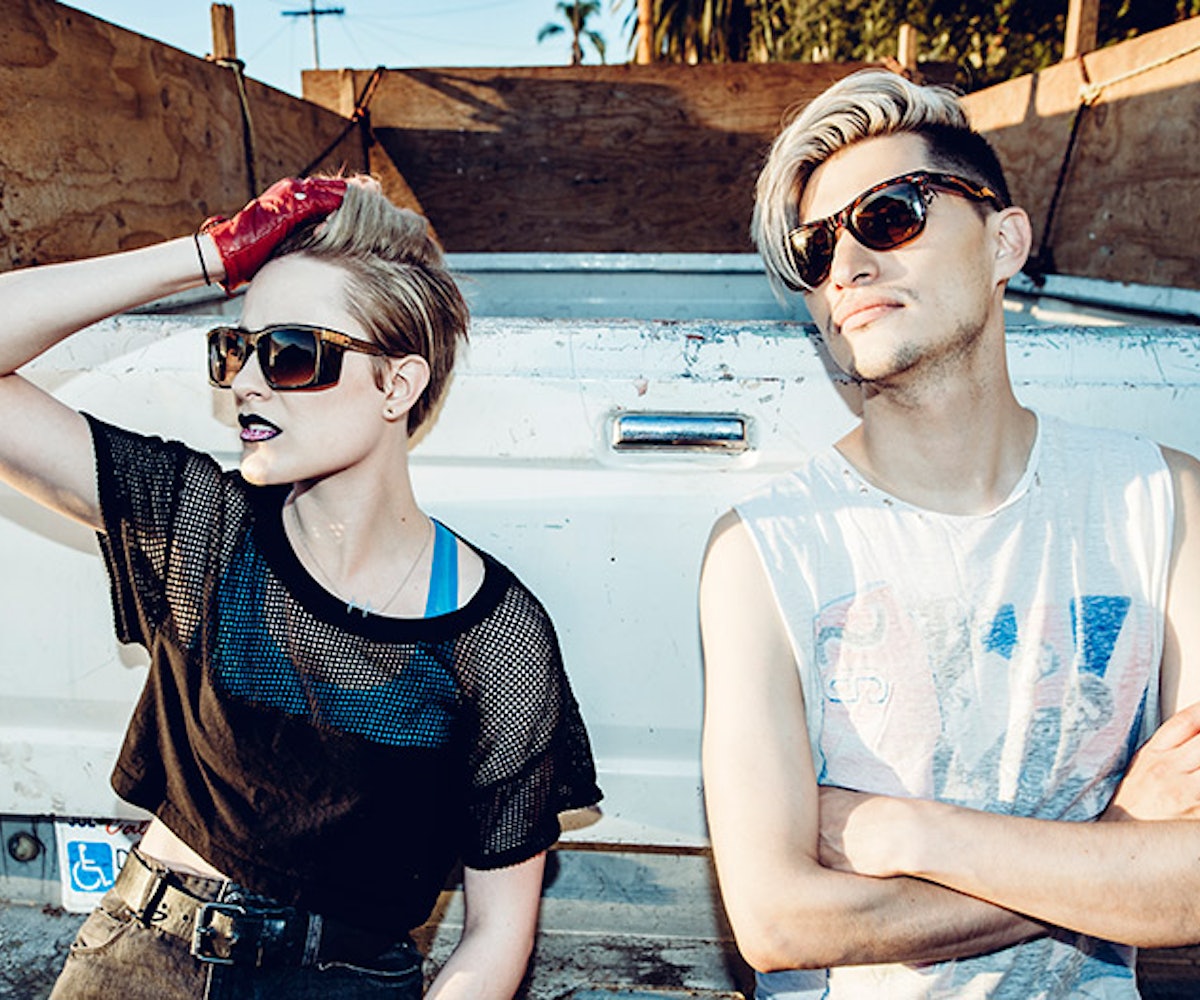 Before any of the Hollywood recognition, Evan Rachel Wood fell in love with music. From an early age, her parents filled her life with a bevy of sounds and genres. She's been able to stretch her vocal chops on a few occasions (who can forget her electric performance in Across The Universe?), but now she's lucky enough to dive headfirst into a new band. World, meet Rebel and a Basketcase.

Together with fellow musician and actor Zach Villa, Wood's new group looks to the sounds and stylings of the 1980's for inspiration. Their name is a heavy nod to John Hughes, who wrote The Breakfast Club characters Wood and Villa played at a Hughes-themed cabaret in L.A. where they met last year. "Oh Yeah" is the world's first taste of the duo's magic, and man, does it cast a compelling spell. The glam and gender-fluidity are Rebel and a Basketcase's most notable characteristics. It's authentic, future-leaning, and downright fun. Wood's voice is equally as alluring, going from delicate falsettos to robust beltings with ease. All signs point to a glittering success for Rebel and a Basketcase. Now, all we want is more. More, more, more!

The video for "Oh Yeah" has a sci-fi vibe to it—almost like The Giver, where you and Zach are seeking color, light, and sound in a sterile world. What are you trying to convey here?

Evan Rachel Wood: Exactly that. The inner conflict of one's self and fighting conformity. Figuring out where we all fit in the world while holding onto who we really are and what we really want.

A+ on the video's gender play. Can we expect more videos and experiences like that?

ERW: I think that's part of our deal. We think of ourselves as gender-fluid people in general, and the band and these characters are really just heightened versions of ourselves.

How would you describe the dynamic between you and Zach?

ERW: Thing One and Thing Two. I think part of the fun is trying to figure that out.

Aside from playing the characters onstage, between you and Zach, who is the rebel and who is the basketcase in real life? Is there one you wish you identified with more?

ERW: Like gender-fluidity, it changes day to day, minute to minute, hour to hour… you get the gist. We identify with both at different times.

What was your introduction to music? Was there a moment, show, or song that sort of solidified music was a viable option for you to pursue?

ERW: Musical theatre and my parents introduced me to a very eclectic bunch of music. It has been the constant in my life, propping me up. Singing is the greatest form of therapy and meditation I have found yet. I feel fully realized when I am singing.

Zach Villa: Like Ev, my background in musical theatre was a gateway of sorts. But honestly, the backlash of people telling me not to pursue it was a huge factor in my chasing it. It was a refuge for me when other artistic outlets and mediums were not working for me, and that was a reflection of what was going on emotionally; I needed a safe place, where I felt like I owned something, anything. Music was that for me in a time of crisis. It sort of developed from there.

Who has had the biggest impact on you, musically?

ERW: David Bowie was my first love. He lives in the gray areas and challenges the norm, but he does it with grace and love and with a hand extended to the masses. Alanis Morrisette taught me how to belt, and people like Shirley Manson, Karen O, and PJ Harvey really gave me permission to be strong while vulnerable and a little nasty. Billie Holiday, Peggy Lee, and Janis Joplin rooted me in soul and technique.

ZV: You can learn from everyone. So thanks, mom, for running a dance studio and starting me before I could walk. I grew up listening to classical, Michael Jackson, Tower of Power, in a seamless rotation. Right now, I’d say St. Vincent is a true inspiration for guitar tone and style. Obsessed. And my teenage love John Mayer has taught me a ton. He can rip, but he’s the master of the one-note solo—literally making me weep in a stadium full of thousands of people with perfectly applied simplicity. That's key in songwriting. Here's more from my personal list: CHVRCHES, Paramore, M83… Ben Folds on the right day.

The '80s is to music what the '90s are to fashion. What about that era fascinates you? Why do you think it's so prevalent in many of today's pop records?

ERW: Because fashion and culture and music were in sync and very fluid. There is a resurgence of that today, possibly more than ever. The line between male and female is starting to blur and fade. A new era and a new generation of people and sexuality are on the horizon. Also, we just really like neon, hairspray, and weird electronic sounds.

Finally, what does the second half of 2016 hold for you and the band?

ERW: More music! EPs, a full album release sometime in the fall. Live shows! And we promise it will be all the things.