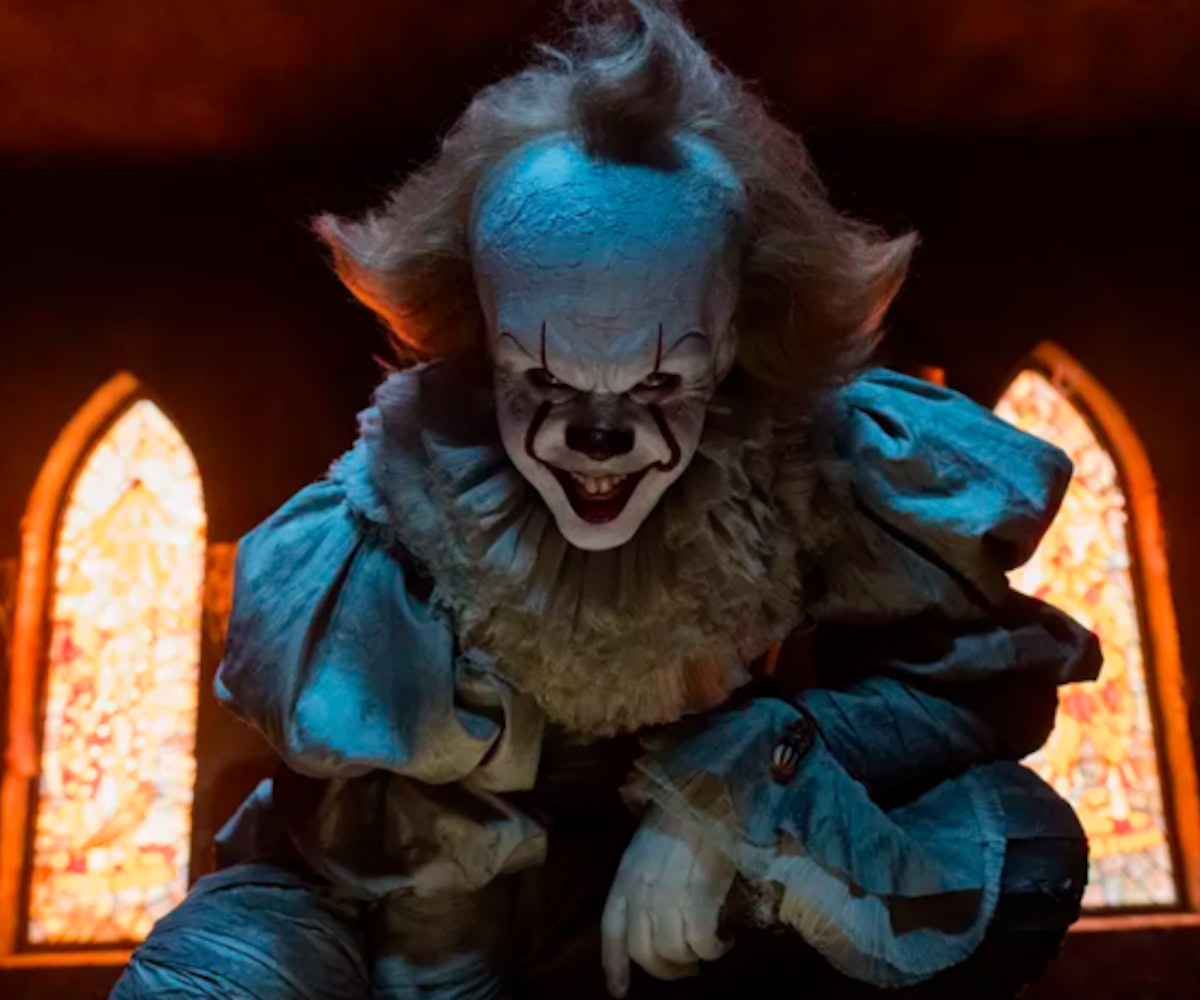 If box office predictions prove to be correct, then a lot of people are about to get scared shitless this weekend by a terrifying clown with a big head and yellow teeth named Pennywise. He is, as most of you know, the nightmarish villain of Stephen King's epic novel IT, which has just been adapted by Warner Bros. and is getting a major theatrical release this weekend.

Who is Pennywise the Dancing Clown?

Pennywise the Dancing Clown—Pennywise to his friends—is the antagonist of one of King’s most famous novels. But, more specifically, he’s the human manifestation of an evil, extraterrestrial force that is as old as time and that comes from an alternate dimension known as the Macroverse. It is a shape-shifting force that wakes up every 27 years and prays on the children of Derry, Maine, often taking the physical form of their worst fears. Since basically all kids fear clowns, and given that IT's sole purpose of existence is the brutal murder of children, it only makes sense that IT's most frequent shape would be that of a clown (which is ironic, given that Pennywise is one of the main reasons clowns have emerged as a symbol of fear).

Where does IT live?

Pennywise lives in the sewers underneath Derry. The book's, and subsequent adaptation’s, maybe most famous scene involves the death of George "Georgie" Denbrough, who is chasing his paper boat during a rainstorm until it falls into a gutter. That’s where he—and the audience—first encounter Pennywise. The clown eventually lures George to join him with the promise that “You’ll float too,” giving the story its iconic line and the new movie its tagline.

Is there a reason he’s such a big deal?

Two words: Tim Curry. The British character actor played Pennywise in the 1990 two-part ABC miniseries, and it still ranks as one of the most terrifying performances in the history of TV, or movies for that matter. His introduction is as shocking today as it was back then. He taunts and he teases, he does cartwheels and backflips, and he’s got balloons—just like your average clown. But Curry infused the character with a chilling current of evil, his voice a low growl and his laugh an unhinged cackle. But it’s when he flashes those horrific yellow chompers and those demonic eyes widen into a maniacal gaze that Curry’s Pennywise becomes the stuff of eternal nightmares.

How did Stephen King come up with the character?

So glad you asked! We were recently wondering the same thing, so we Googled, “How did Stephen King come up with the character?” Here’s what we found out. Initially, King told a long story about his car breaking down on his way back from lunch at a pizza emporium, whatever that is, and, after getting it repaired, coming across a bridge. Because he’s Stephen King, an image of a troll living under the bridge immediately popped into his head, and also because he is Stephen King, he immediately wanted right a novel about it. One yo-yo metaphor later, and the seed for Pennywise and the entire It mythology was born.

Okay, but how does a troll become a dancing clown?

I had an idea when I was in Colorado that I wanted to write a really long book that had all of the monsters in it. I figured if people think I’m a horror writer—never considered myself to be that myself, I’m just a writer-writer—I thought to myself, I’ll get all of the monsters together as I possibly can; I’ll get the Vampire, I’ll get the Werewolf, and I’ll even get the Mummy. But then I thought to myself, There out to be one binding, horrible, nasty, gross, creature kind of thing that you don’t want to see, [and] it makes you scream just to see it. So I thought to myself, What scares children more than anything else in the world? And the answer was "clowns.”

So what was the genesis of this new version of Pennywise?

In terms of his look, IT director Andres Muschietti recently told us that he wanted the new Pennywise to look to reflect that he's “made out of children’s imaginations. So I wanted to bring that aspect into the character’s look, that childlike vibe. He looks a bit like a child, with the big head and the drooling.”

Was Bill Skarsgard always going to play him?

No, actually. Initially, back when Cary Fukunaga was supposed to direct IT, young British actor Will Poulter was supposed to play the homicidal clown. But after Fukunaga left the project, it was assumed that Muschietti was going to find a new actor to fit his vision for the character. Muschietti recently explained otherwise: “Will basically expressed a feeling that he had slowly disengaged from playing that character, that was so dark and terrifying. It was a personal decision I respected, but I was eager and willing to find my own Pennywise and that’s what we did.”

So how did Skarsgard do?

Reactions to Skarsgard’s complete transformation into a bloodthirsty clown have been generally positive, with a few caveats. The Los Angeles Times’ Jen Yamato writes that “Skarsgard’s Pennywise won’t soon erase the memory of Tim Curry’s iconic turn from the 1990 TV miniseries, but he does bring a fresh, demented energy to the role.” Meanwhile, The A.V. Club's Katie Rife says that his performance "builds on Tim Curry’s in the 1990 miniseries version of It, delivering dialogue in an unnervingly lisping, clipped tone best described as a cartoon rabbit before abruptly dropping a couple of octaves to a guttural growl," and that his "physical performance, meanwhile, is all limbs jutting out in odd directions and jerky, unnatural movements, which are occasionally sped up to maximize the menace." Sounds horrifying!